Christianity today is one of the dominant religions in the world. Christianity has a variety of beliefs, exercises and forms, despite the many denominations all have one common belief, which is faith in Jesus Christ and that He is our Lord and Savior. I am a strong believer in God and Jesus Christ. I am of the Christian religion and the church I attend in The Bahamas is a non-denominational one. My choice for this class site visit was to attend St.

On arrival at the church, I was a bit hesitant to enter. The unfamiliar environment around was still causing me to feel nervous. The nervousness was quickly lifted from me the moment I walked in. I was greeted at the door by an elder of the church 30 minutes before mass begun. Her name was Sister Joanna. I had talked with the elder gaining some profound knowledge of the religion and also asked if I could have a seat in the back during mass and take several notes. She complied and made me feel well at home.

My first impression of the church was that they were all going to be benevolent and enthusiastic people who loved their religion.

My second impression and something that I immediately adored about the church was its beauty and cleanliness. I was convinced that much attention was geared toward maintaining the beauty and quality of the church. As one enters, their ‘holy water’ fountain is an exquisite three part modernistic piece where water flows from square structures into a rectangular pool, all made from granite as far as I could tell. They had stained glass windows, candles, twelve Stations of the Cross and the portrayal of Jesus Christ on the cross. This intriguing design was displayed directly in the front and center of the church right above the altar. The presence of Jesus Christ on the cross portrait made me feel like I was in my very own church home and it was an indication that Catholics have the same faith in Jesus Christ and believed that he died on the cross for our sins. As Mass began, the Priests stood by the door as three young altar servers walked towards the altar holding the cross.

The Priests and other ministers, readers and altar servers slowly walked towards the table of the parish family, which is the altar of sacrifice. As they walked upon the Altar the sign of the cross was made and the words “In the name of the Father, Son and Holy Spirit” and “The Lord be with you” were said. The Priests would also ask for the congregation to take a few minutes to ask for the forgiveness of their sins followed by scriptures read by the Priests and the congregation replying “Lord have mercy”. I found this all interesting as I am not familiar with these traditions in my Church. The reading of the Word was then initiated and ended with the saying “Thanks be to God” followed by a prayer and the hymn “This is my Desire”. Hymns were vigorously sung throughout the sermon making the presence of God heartfelt throughout the Mass.

Furthermore, I continued to examine the church and its people and had observed the altar which included a Deacon who wears a prayer shoal cross way, three priests wearing cassocks (long sleeved, hoodless garments) and three altar servers also wearing cassocks and surplice. I found that mass is very vital to Catholics; reason being is because it allows worshippers to partake in the Holy Eucharist, which is also very important to any Catholic’s life. The Eucharist’s is bread and wine that God transforms into the flesh and blood of Jesus during the Mass. They also attend Mass to maintain their beliefs, to be constantly reminded of and encouraged to live their lives according to the teachings of God. If for some reason Mass is skipped without a good reason such as illness, problems with finding transportation or caring for the sick.. etc is considered a grave wrong. Any catholic that intentionally skips mass knowing that it is wrong has committed a mortal sin. The sin must then be confessed to a priest for absolution and removal of the sin. Hence the importance of Mass to the Catholics.

However, in order to have a confession, also known as ‘Sacrament of Penance’ with the Priest one must be remorseful, confess his sins and must be willing to do Penance (self-punishment) to make amends for his sins. There was a confession room, which seemed to be fairly small where the sinner would express to the Priest his sin where both were separated by a wall. Sister Joanne then briefly informed me that Catholics considered sacraments an outward sign on an inward grace. The outward sign being the absolution or forgiveness of sins the priests grants the sinner and the inward grace the reconciliation of the sinner to God. I felt amazed upon grasping all of this unusual information but I also felt as if I were getting familiar with a new denomination to slightly consider. Although I left with a feeling that some things were excessive I also found them to be quite effective in bringing peace to the soul.

One of the things I thought about as I left the service was the amount of time spent in prayer. While trying to rapidly write notes I couldn’t help but become immersed in the prayer. The hour long service I’d say half of the hour was spent in prayer which I appreciated. There wasn’t too much talking pertaining to announcements that dealt with the members like I’m almost used to. There was a lot to admire about this Catholic service making it a memorable one. Time was an important factor as everything was done on time and the service followed the pamphlet they gave me when entering and the service ended at the time scheduled. The service was approximately two hours long but they did everything what the bible required them to; recitation of Lord’s Prayer, asking for forgiveness of sins, partaking in Holy Communion, kneeled and raised their hands in prayer, sang songs of praise of worship and reading of bible scriptures in unity. There were so many and different activities taking place in the church that I never got bored. The service was so interactive, lot of people volunteered in various parts of the service, and this worked wonderfully. This experience made me worry about the world negative view that is associated with the Catholic Church. Critics had made me believe that the Catholics prayed to Mary and not God or Jesus Christ. The reality experienced in the service left me with so many unanswered questions about the accusations made to the catholic practices. I went home and decided to do some more research about the Catholics devotion towards Mary. According to my findings, it was clear that the Catholics highly regard Mary with feelings of respect and reverence and for that reason, they pray so that her and the saints will also pray for them (Rasmussen, 2003).

The experience was a wonderful one; however, a few things were not so impressive to me during this first visit to a catholic church. Since I am from a different religion being a non-denominational Christian, I was used to my church where more time was spent on the praise & worship and also the preaching. The catholic experience dedicated little time for preaching and more time for other activities. This made me to feel out of place. Also, I began to feel as if things were rehearsed, like it’ll be the same experience every time, never a new one. Additionally I do not think they allowed God to move the way he wanted to move throughout the service because the entire sermon was already printed on paper and they went along with the schedule. The slow manner in which things were done made me feel as if we were in a mourning section. My catholic experience was a great and memorable one, I learnt a lot of new stuff about the religion and having an opportunity to witness the diversity of Christianity beliefs and practices. Theory and rumor is different from the reality since my visit enabled me to clear some of the doubts and beliefs that had been in my mind by critics of Catholic Church. Routine is an enemy of creativity; to me it was a wonderful experience. The saying “never judge a book by its cover” is a true saying and I will apply that to my personal life from now on. Just because you hear or see things about a particular religion doesn’t mean you know the religion. You have to actually experience it for yourself. I was totally wrong about the catholic religion before I entered their doors. People all around the world have different beliefs and religions, you chose who you are. 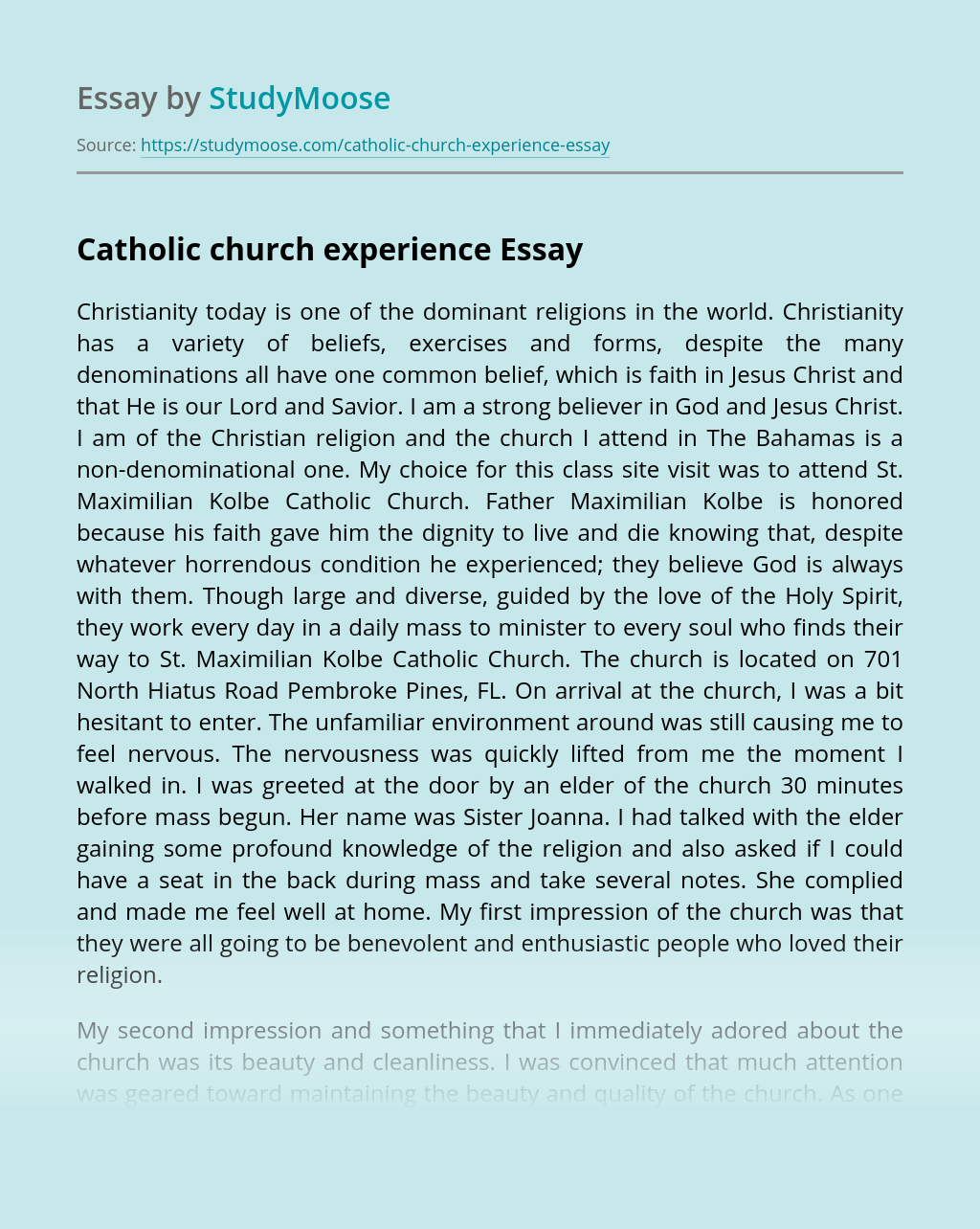