Analysis of the Prologue to Ethan Frome

For my paper, I will be analyzing the prologue to Ethan Frome, specifically the passage in which the narrator describes the winter season in Starkfield when “the village lay under a sheet of show perpetually renewed from the pale skies” (7). The narrator is not only intensely responsive to the beauty of the natural scene and the seasons, but has a distinct inclination to provide his response in imagistic or poetic language. The lexical field of wintry weather in all its manifestations of snow, ice, wind, cold, darkness, and death is used figuratively throughout the novel to symbolize how the bleak, harsh physical environment surrounding the characters acts as an oppressive power, forcing a sort of spiritual surrender and emotional lifelessness.

Don't use plagiarized sources. Get your custom essay on
“ Analysis of the Prologue to Ethan Frome ”
Get custom paper
NEW! smart matching with writer

Even the name of the town, “Starkfield,” is symbolic of the moral landscape of the novel, as the barren, isolated winter landscape that the town’s name connotes implies the devastating effects of the harsh winters on the land and the men who work it.

The narrator at first naively supposes that the cold weather, “the crystal clearness” of the atmosphere in early winter, would have a stimulating effect on its residents. However, the narrator’s expectation is disappointed by the “sluggish pulse of Starkfield,” referring both to the collected pulses of the townsfolk as well as the general atmosphere of the place, that shows how the long, cold New England winters maintain a sense of bare desolation. The novel suggests that when snow buries Starkfield each year, the emotions, dreams, and initiative of sensitive souls like Ethan also become buried, destroyed by the “long stretches of -sunless cold.

With her deceptive choice of vocabulary, Wharton represents winters in Starkfield as ones of unimaginable length and vigor; the cold, overbearing force of nature is likened to a war, showing how it inevitably cripples all those who suffer through it. The snows of February are described as “white tents” pitched around the village, conjuring to mind the heaps of snow over surrounding hills, slopes, and bushes. The metaphor continues with the narrator referring to the chilling winter wind as “the wild cavalry of March winds,” associating the image of men on horses relentlessly rushing forward into battle with the way the freezing wind rushed upon the town.

The metaphorical comparison of Starkfield’s struggle against the harsh winter and a “starved garrison” struggling against a besieging army captures the detrimental effects the weather has on the townsfolk, giving the reader a deeper sense of the community’s isolation yet resilience. The enervating effect of winter on the residents of Starkfield directly reflects how Ethan’s circumstances have hardened him into a shell of a person, the winter consuming him completely. Harmon Gow’s assessment of how Ethan Frome had “been in Starkfield too many winters” links his condition to the brutal winters of the region and suggests that Ethan has lived for too long in what amounts to an inescapable state of siege by the climate.

Starkfield is a cold, binding place, unable to release all those, such as Ethan Frome, who feel they must escape. As the narrator begins to understand the trapped townspeople in relation to the coldness of Starkfield winters, he speculates that “twenty years earlier the means of resistance must have been far fewer.” The prologue, told in first person by the Narrator, not only introduces patterns of imagery and specially charged words symbolizing the desolate relationship between the environment (Starkfield) and the characters, but also expertly incorporates framing devices such as postdating the events of the main story by about twenty years, which serves definite stylistic and structural purposes in setting up the frame narrative of the novel to provoke curiosity about the tragedy experienced by Ethan Frome.

By telling the story through the device of a frame, the narrator is trying to learn a story that already happened; Wharton gives Ethan’s story a sense of inevitability. The first person narrative point of view sets forth an eyewitness account of a story giving it a sense of immediacy and realism. The author, by using this technique, can create dramatic irony and thus enables the narrator to be the unifying element of the story. This establishes a bond between the narrator and Ethan; the narrator’s perspective becomes the story. The narrator is not a native of Starkfield, but rather an engineer that had been temporarily “sent up by [his] employers on a job” and, due to a work delay, had found himself “anchored at Starkfield” for the harsh winter.

The framed narrative told from an outsider’s perspective seeks to build suspense around Ethan Frome and the occurrences leading to the accident that disfigured him; Wharton describes the allure of Ethan Frome’s tragic story through the eyes of a stranger who possesses no prior knowledge about Starkfield, and it is this curiosity that both captivates the reader throughout the novel as well as provokes the narrator to piece together the tragedy and thus tell the story of Ethan Frome from personal observation and from fragments of the story told to him by townspeople.

Analysis of the Prologue to Ethan Frome. (2021, Apr 25). Retrieved from https://studymoose.com/analysis-of-the-prologue-to-ethan-frome-essay 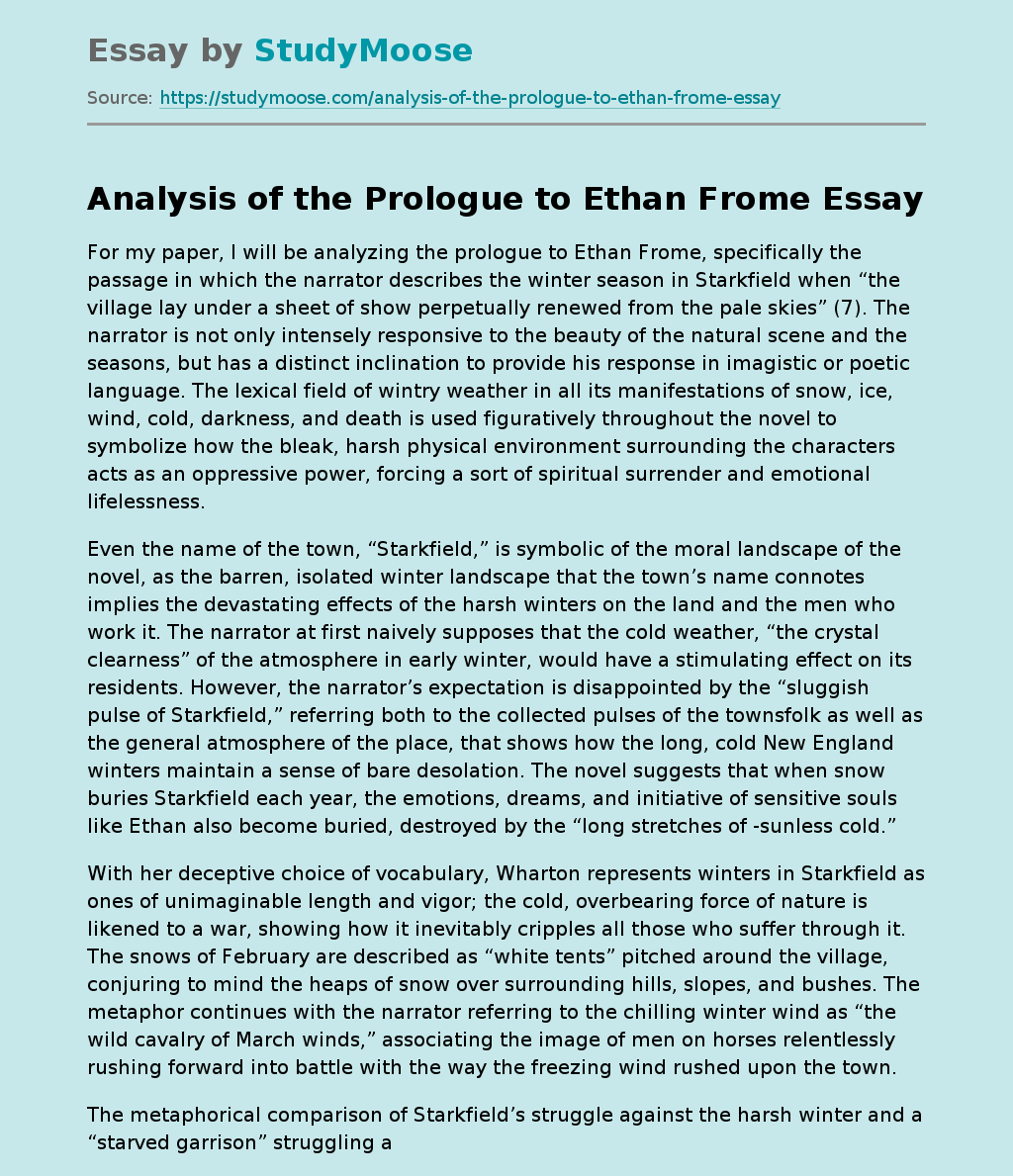