In the prologue, Wharton sets the frame for the main story. The prologue (and epilogue) take place some twenty years after the events of the main story and are written in the first person. The anonymous Narrator describes his first impressions of Ethan Frome and about how he pieced together the story of Ethan Frome from personal observation and from fragments of the story told to him by townspeople. The prologue not only introduces The Narrator, but also describes Starkfield and the winter setting, inhabitants of Starkfield, and provokes curiosity about the tragedy experienced by Ethan Frome.

Don't use plagiarized sources. Get your custom essay on
“ Narrator’s first impressions of Ethan Frome ”
Get custom paper
NEW! smart matching with writer

Frome is a badly crippled but striking older man whom the Narrator has seen at the post office in Starkfield. Harmon Gow, a former stagecoach driver who knows the histories of all the Starkfield families, responds to the Narrator’s questions about Frome by telling him that Frome was disfigured in a “smash-up,” an accident that occurred 24 years ago.

The framed narrative told in the first-person by the Narrator builds suspense around Ethan Frome and the events leading to the “smash-up” that disfigured him. By telling the story through the device of the frame, the Narrator is trying to learn a story that has already happened; Wharton gives Ethan’s story a sense of inevitability. By introducing his story as a flashback, the Narrator makes very clear the fact that what we are about to read is not a factual record of the occurrences leading up to Ethan’s accident, but his own impressions of what those occurrences may have been.

According to The Narrator, Ethan has the remains of a once powerful and sensitive man, whom is now bound and frustrated by the crippling effects of a sledding accident. Even though Ethan is only fifty-two years old, he looks as though he is “dead and in hell.”

Wharton builds suspense when she reveals that the Narrator is also intrigued by the look of incredible suffering and despair that he sees in an unguarded moment on Ethan’s face; Wharton provokes curiosity about the tragedy that has robbed Ethan of his life. Wharton provides minimal information about Ethan. Harmon Gow shares the sad history of the deaths of Ethan’s parents and of Zeena’s sicknesses, and he adds the comment that “most of the smart ones get away,” implying that Ethan was smart, but unfortunately was unable to leave Starkfield. The themes of silence and isolation are introduced by the author. The Narrator is impressed with Ethan’s solitude and apparent withdrawal into a protective shell. Ethan gives the postman a “silent nod” and would “listen quietly.”

He responds briefly, in a low tone, when spoken to by one of the townspeople. Gradually, more of Ethan’s character emerges, especially after The Narrator has talked with Ethan during the trips to Corbury Flats. Ethan’s intelligence is revealed The Narrator through Ethan’s interest in a book of popular science, and a parallel between Ethan and The Narrator is established when they reveal that they have both been on engineering trips to Florida. Wharton suggests that The Narrator is the kind of man Ethan might have become if he had not become trapped in his marriage. Ethan did the right thing according to the accepted rules of society by caring for his wife; however, it wasn’t the right thing for him. Ethan pays the price by never achieving his potential. According to The Narrator, Ethan lives in a “depth of moral isolation.”

Wharton uses battle imagery to describe the way winter conquers Starkfield. The Narrator mentions “the wild cavalry of March winds” and he understood “why Starkfield emerged from its six months’ siege like a starved garrison capitulating without quarter.” The winter season is predominant: Ethan’s memory of his trip to Florida seems to be covered with snow. Even the name of the town, “Starkfield,” is significant is symbolic of the moral landscape of the novel. It implies the devastating and isolating effects of the harsh winters on the land and the men who work the land. The conclusion is that the ravages of winter destroy both man’s will to survive and the buildings he constructs to shield him from his environment. The “exanimate,” or lifeless, remains of Ethan’s sawmill are an example.

The Narrator comments on the landscape that also suggests the debilitating effects of winter: the “starved apple-trees writhing over a hillside” suggests the barren land that starves men rather than feeds them. The dead vine on the front porch of Fromes’ farmhouse is symbolic of the dead and dying spirits that inhabit the house and its graveyard. And as The Narrator observes, Fromes’ farmhouse “shivers” in the cold and looks “forlorn.” After his important description of the “L” shape of the house — “the long deep-roofed adjunct usually built at right angles to the main house, and connecting it, by way of storerooms and tool-house, with the wood-shed and cow-barn” — The Narrator perceives that the farmhouse is symbolic of Ethan himself.

The house’s function appears to be a place of confinement and isolation for its inhabitants. Wharton easily changes the focus from The Narrator’s first impressions to the dramatic action of the journey taken by Ethan and The Narrator in the snowstorm. It is ironic that a blinding snowstorm forces The Narrator to take shelter in the Frome farmhouse — it opens his eyes to Ethan’s story. As a result of that, the breaking off of the narration just before the door opens increases the suspense and prepares the reader for The Narrator entering the farmhouse in the culmination of the tragedy in the epilogue. 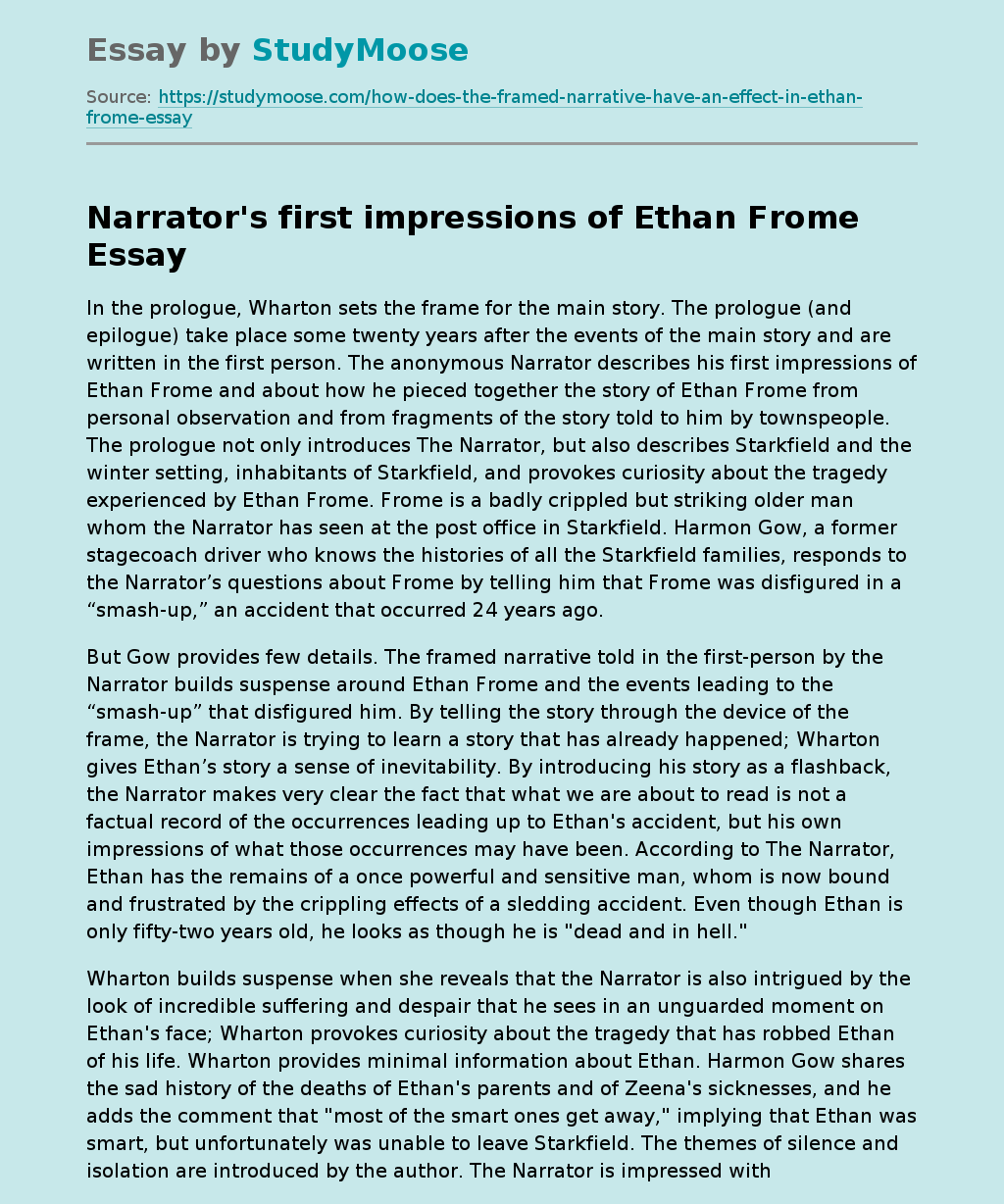