Lola is the mirror image of her mother Beli. Both of these women are strong individuals and both spent their youth desiring to escape from their own lives. Lets begin with Beli, Belicia de León also known as Beli in the novel, she is the mother of Oscar and Lola and the first member of the Cabral family to leave Santo Domingo and make a new life in Paterson, New Jersey.

Due to the family curse, which her father Abelard brought on to the Cabral family, Beli grew up in poverty but always kept the attitude of Dominican royalty.

Don't use plagiarized sources. Get your custom essay on
“ Lola de León in The Brief Wondrous Life of Oscar Wao ”
Get custom paper
NEW! smart matching with writer

Her incredible beauty draws the attention of the wrong men and earns her a life-threatening beating by members of Trujillo’s government. She leaves Santo Domingo in disgrace and grows embittered at the hardships of immigrant life in the United States. She is very strict with her children, but is also extremely proud of them.

Her fight against breast cancer further strains her relationship with her children, but she eventually reconnects with her daughter Lola in the wake of Oscar’s death.

Lola, on the other hand is a strong, and extremely independent woman, Lola is Oscar’s sister and the one who runs away with Yunior, who she believes is the love of her life. Lola dreams of leaving her small hometown and exploring more of the world, but this is not possible because of what happens throughout the novel. (66-67). Although Lola’s relationship with her mother is not the best, she ends up taking care of her mother because of the tragedies that happen towards the end of the novel.

Lola ultimately makes a new life for herself in Miami, where she marries a Cuban man and has a daughter, Isis.

In the novel, “The Brief And Wondrous Life of Oscar Wao” Diaz narrates in a perspective view where Lola is just not happy with her life, she explains:

“I was fourteen and desperate for my own patch of world that had nothing to do with her. I wanted the life that I used to see when I watched Big Blue Marble as a kid, the life that drove me to make pen pals and to take atlases home from school. The life that existed beyond Paterson, beyond my family, beyond Spanish. (55)”

At this point, Lola has had it with her family. She wants nothing to do with her mother and does not care about anything. No teenager at this age should have to be going through the problems that Lola and her mother have. Lola imagines a life away from her family and her Dominican culture. While Beli was growing up, there were many similarities between her and her daughter Lola. Although Beli did not have her parents while growing up because of the death and imprisonment of her parents, she did have an aunt named, “La Inca”.

La Inca took over the role of her parents. She cared for her and gave Beli safe haven. Her tia (La Inca) also owned a bakery shop where she would make Beli work. Beli did not always have the best times working at the bakery, or even being with her tia. For example, Diaz quotes, “Beli could no longer abide working at the bakery or being the “daughter” of one of the “most upstanding women in Bam’.” She could not abide, period. Everything about her present life irked her; she wanted, with all her heart, something else (79)”.

In this quote Diaz is emphasizing that Beli has also in another way had enough with her family. As you can tell from the quote Beli was not happy with where she was at in her life, but she could not escape because it was all she had. This is where the audience can see some similarities between Beli and Lola. While Beli was growing up all she wanted to do was escape from her life, and that is where Lola shared the same mindset, but actually escaped…

Towards the end of the novel is when everyone comes back together, but not in a good way. The death of Oscar, Lolas brother, brings the whole family back together. In this quote in the novel, Diaz quotes in the perspective of Yunior, “I wish I could say it worked out, that Oscar’s death brought us together. I was just too much the mess, and after half a year of taking care of her mother, Lola had what a lot of females call their Saturn Return.(324)” In this quote Yunior is explaining to the readers how a family tragedy brings everyone back together.

Despite the death of Oscar and the relationship that Lola has had with her mother in the past, Lola begins to take care of her mother because her cancer has given her give or take ten months to live. When Diaz says “Lola had what most females call their Saturn Return”, He is referring to when the planet Saturn comes back to meet the natal Saturn. This only happens every 30 years which Diaz is figuratively saying that It has been a while since Lola has been with her mother.

In conclusion, Beli and Lola had many similarities throughout the book. They both are very strong, rebellious, and powerful women. They will always find a way to provide for themselves. Lola can beat up anyone that tries to come her way and Beli will not take any bulshit from anyone. They can stand up for themselves and are not afraid to stand up to their mothers. Along with their strength, Lola and Beli both fell in love and fell deeply in love. Lola ran away from home because of a boy, while Beli believed she was going to marry the boy she fooled around within the closet. Both of them believed that they could do whatever they pleased because they were young and in love. Beli and Lola had similar actions when they were about the same age and both wanted to escape from the real world. 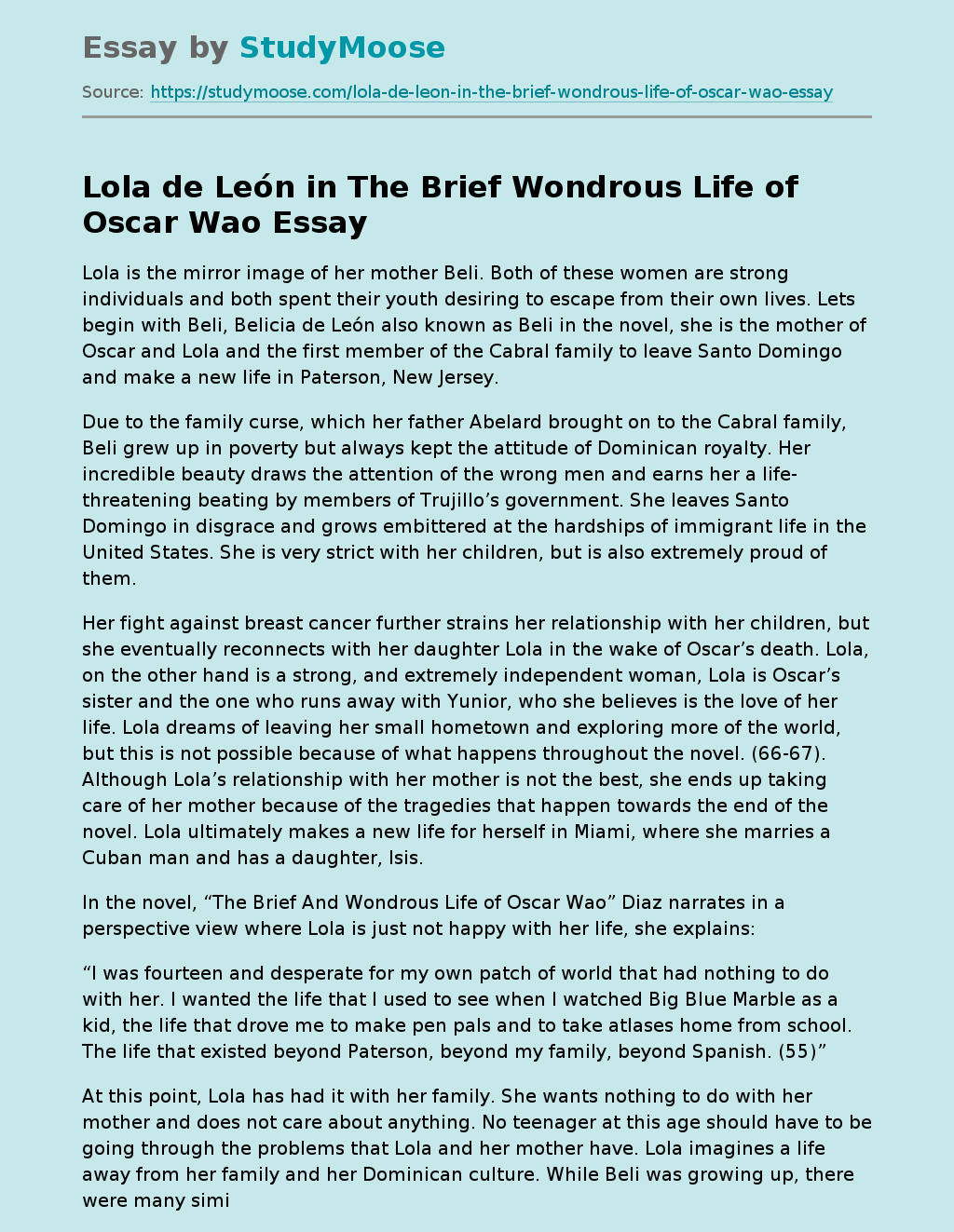