Leon: The Professional is a French film performed in English. Outclassed by the blockbuster hits of 1994, such as Forrest Gump, Pulp Fiction and Natural Born Killers, the movie did not make a landmark entry into the box office. This does not mean however that the movie was a dud. It was actually a hit among viewers and continues to affect people to this date. Leon: The Professional is listed in the action category, despite having few action scenes. Luc Besson instead concentrated on character development, which is actually the highlight of the movie.

Don't use plagiarized sources. Get your custom essay on
“ Leon: The Professional Film Analysis ”
Get custom paper
NEW! smart matching with writer

Leon, a natural born killer with a completely isolated life finds himself in a peculiar situation when a 12 year old girl suddenly comes into his life. She witnesses the murder of her family and has nowhere else to run to, but to her weird neighbor. Though he is reluctant to open the door at first, he finally yields to Mathilda’s painful pleas and helps her. The two become intimately close, with each one filling the void in the other’s life.

Leon becomes a father figure to her, constantly protecting her from Norman Stansfield and his thugs, while Mathilda runs errands for him, cooking and cleaning his house. Eventually, Leon dies trying to protect her. However, he is instrumental towards the transformation of the girl throughout the movie. Mathilda ends up going to school using the money Leon leaves her. In the end she plants Leon’s houseplant in a field near the school.

Leon, played by Jean Reno is an emotionless killing machine.

When he wears his signature glasses you know he means business. However, under this public display for anger and utter disregard for human life, deep inside Leon is lonely and tender hearted. He was once a normal boy, who fell in love with a rich man’s daughter. His life came crushing down when he witnessed the murder of the girl he loved by her own father, who ends up walking scot-free due to his influence. When Leon murders the girl’s father, he unleashes an uncontrollable appetite for revenge that Tony uses for his own selfish interests.

Everything changes when he meets Mathilda. She goes through the same ordeal of watching a loved one getting murdered by an influential person- in her case, her four year old brother. She arouses the same feeling of love he felt when he was young and Leon decides to keep her safe, risking his life in the process. Through his interaction with Mathilda, we see Leon as a grown man with childish tendencies. It seems like his life got stuck when his first love was murdered. And while many years have since passed, he is still trapped in that time frame. Mathilda resuscitates that period.

Natalie Portman portrays the character of Mathilda. And it is a spectacle to watch her perfectly embrace this role and pour it to the screen, considering her age at the time (she was 12 years by the way). Living in an abusive and dysfunctional family has seen the 12 year old become wise for her age. She wields a sensuality of a woman trapped in young girl’s body. She does not hesitate to tell Leon that she loves him and even seduces him, which he cleverly ignores.

Despite this raunchy side of her, she is driven by a goal- avenging her brother’s life. And she will do anything within her power to do it. She begs Leon to convert her to an assassin, which he reluctantly does. In one instance, she packs Leon’s ammunition to go and confront Stansfield in the DEA’s office, where she is easily intercepted by her nemesis. Although she is driven by an uncontrollable passion, she overestimates her power and were it not for Leon, she could have met her untimely death.

Leon however helps her avenge her brother and ultimately confesses that he loves her. Although she ends up losing Leon, her goals are met in the movie- avenging her brother and getting love from a father figure, a feeling that she has never felt before. It is unfortunate that Natalie Portman never got an Oscar for this role. It is also disheartening that the movie did not quite penetrate the American market as it should have.

Another actor who performed beyond expectation was Gary Oldman, the villain of the film. He gave a meticulous performance only outshined by the young Mathilda. A rogue cop with high ranks in both the DEA and the drug game, Stansfield does not give second chances to individuals who betray him. He goes on a killing spree when Mathilda’s father steals from him. He does not show sympathy to Mathilda’s four year old brother, although he was innocent in the whole affair. He terrorizes everybody including his drug enforcement team to act according to his terms. Oldman’s performance is very convincing and deserves applause.

The American version of Leon: The Professional is an edited version with more than 25 minutes of film cut from it. The American audience could not be brought to the thought of a grown man falling in love with a teenage girl. However, these minutes were crucial towards the development of theme of love between the two hopeless individuals. It is actually these minutes that make this movie a classic film. It is true that the original script had some questionable parts. However, these parts were cut off for the movie from the onset in order to be more accommodative of a wider audience.

Leon: The Professional Film Analysis. (2018, May 08). Retrieved from http://studymoose.com/leon-the-professional-analysis-essay 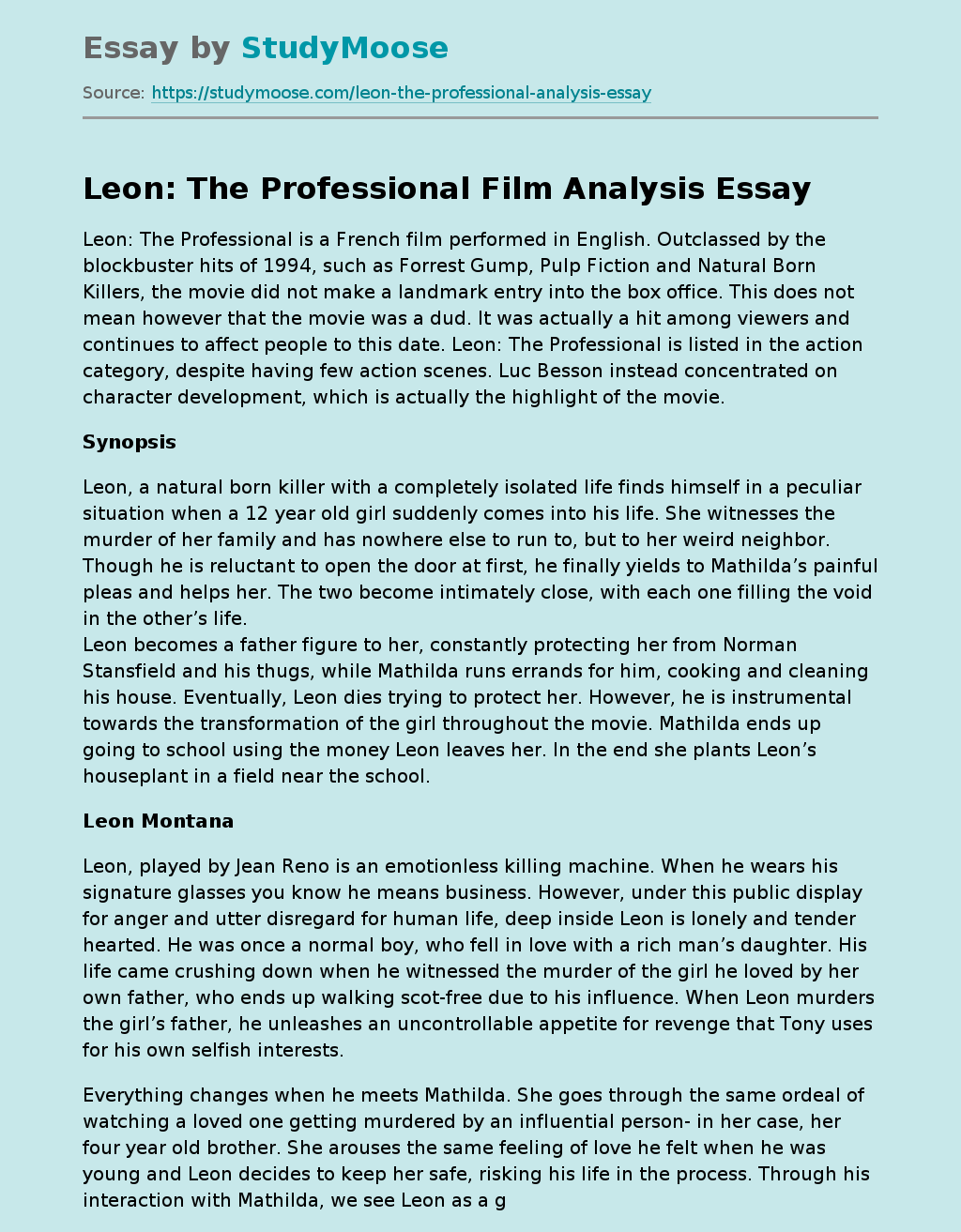