The Victorian Period revolves around the political career of Queen Victoria. She was crowned in 1837 and died in 1901 (which put a definite end to her political career). A great deal of change took place during this period–brought about because of the Industrial Revolution; so it’s not surprising that the literature of the period is often concerned with social reform.

“The common perception of the period is the Victorians are “prudish, hypocritical, stuffy, [and] narrow-minded” (Murfin 496). As Thomas Carlyle (1795-1881) wrote, “The time for levity, insincerity, and idle babble and play-acting, in all kinds, is gone by; it is a serious, grave time.

Literature of the Victorian Period:

It is important to realize from the outset that the Victorian period is quite long.

Victoria’s reign lasted over 63 years, longer than any other British monarch. The Victorian era lasted roughly twice as long as the Romantic period. Keeping in mind that even the relatively short Romantic period saw a wide variety of distinguishing characteristics, it is logical that much longer Victorian period includes even more variety. Actually It forms a link and transition between the writers of the romantic period and the very different literature of the 20th century. The 19th century is often regarded as a high point in British literature as well as in other countries such as France, the United States and Russia.

Books, and novels in particular, became ubiquitous, and the “Victorian novelist” created a legacy of works with continuing appeal. Many novels were published in serial form, along with short stories and poetry, in such literary magazines as Household Words. Below are a few of the noteworthy characteristics which appear often enough to be worth mentioning, but certainly do not encompass the entirety of the period.

The drive for social advancement frequently appears in literature. This drive may take many forms. It may be primarily financial, as in Charles Dickens’sGreat Expectations. It may involve marrying above one’s station, as in Charlotte Bronte’s Jane Eyre. It may also be intellectual or education-based. Typically, any such attempt to improve one’s social standing must be accompanied by “proper” behavior (thus helping to provide the period with its stereotype). The period saw the rise of a highly idealized notion of what is “English” or what constitutes an “Englishman.” This notion is obviously tied very closely to the period’s models for proper behavior, and is also tied very closely to England’s imperial enterprises. Many colonists and politicians saw it as their political (and sometimes religious) duty to “help” or “civilize” native populations in colonized regions.

It was thus important to have a model which provides a set of standards and codes of conduct, and the idealized notion of what is “English” often provided this model. Later Victorian writing saw the seeds of rebellion against such idealized notions and stereotypical codes of conduct. These “proper” behaviors often served as subjects of satire; Oscar Wilde’s plays are an excellent example. The later years of the Victorian period also saw the rise of aestheticism, the “art for art’s sake” movement, which directly contradicted the social and political goals of much earlier Victorian literature. One of the fascinating ways of approaching the Victorian period is to examine the influence of these later developments on the Modernist period which follows.

The 19th century saw the novel become the leading form of literature in English. The works by pre-Victorian writers such as Jane Austen and Walter Scott had perfected both closely-observed social satire and adventure stories. Victorian novels tend to be idealized portraits of difficult lives in which hard work, perseverance, love and luck win out in the end; virtue would be rewarded and wrongdoers are suitably punished. They tended to be of an improving nature with a central moral lesson at heart, mixed with a heavy dose of sentiment. While this formula was the basis for much of earlier Victorian fiction, the situation became more complex as the century progressed. Charles Dickens was extraordinarily popular in his day, with his characters taking on a life of their own beyond the page, and he remains one of the most popular authors of this era. His first real novel, The Pickwick Papers, written at only twenty-five, was an overnight success, and all his subsequent works sold extremely well.

He worked diligently and prolifically to produce entertaining writing the public wanted, but also to offer commentary on social challenges of the era. The comedy of his first novel has a satirical edge which pervades his writings. These deal with the plight of the poor and oppressed and end with a ghost story cut short by his death. The slow trend in his fiction towards darker themes is mirrored in much of the writing of the century, and literature after his death in 1870 is notably different from that at the start of the era. William Makepeace Thackeray [1811-1863] was Dickens’s great rival at the time. With a similar style but a slightly more detached, acerbic and barbed satirical view of his characters, he also tended to depict situations of a more middle class flavour than Dickens.

He is best known for his novel Vanity Fair, which is also an example of a form popular in Victorian literature: the historical novel, in which very recent history is depicted. By contrast, the novels of Anthony Trollope [1815-1882] are light of touch, pleasant, amusing, and thoroughly healthy. They make no attempt to sound the depths of character or either to propound or solve problems. Away from the big cities and the literary society, Haworth in West Yorkshire held a powerhouse of novel writing: the home of the Brontë family.

Anne, Charlotte and EmilyBrontë had time in their short lives to produce masterpieces of fiction although these were not immediately appreciated by Victorian critics. Wuthering Heights, Emily’s only work, in particular has violence, passion, the supernatural, heightened emotion and emotional distance, an unusual mix for any novel but particularly at this time. It is a prime example of Gothic Romanticism from a woman’s point of view during this period of time, examining class, myth, and gender. Another important writer of the period was George Eliot, the pseudonym of Mary Ann Evans, who wished to write novels which would be taken seriously rather than the romances which women of the time were supposed to write.

The Victorians are sometimes credited with ‘inventing childhood’, partly via their efforts to stop child labour and the introduction of compulsory education. As children began to be able to read, literature for young people became a growth industry, with not only established writers producing works for children (such as Dickens’ A Child’s History of England) but also a new group of dedicated children’s authors. Writers like Lewis Carroll, R. M. Ballantyne and Anna Sewell wrote mainly for children, although they had an adult following. Other authors such as Anthony Hope and Robert Louis Stevenson wrote mainly for adults, but their adventure novels are now generally classified as for children. Other genres include nonsense verse, poetry which required a child-like interest (e.g. Lewis Carroll). School stories flourished: Thomas Hughes’ Tom Brown’s Schooldays and Kipling’s Stalky & Co. are classics.

After the upheavals of the romantic period, Poetry became somewhat institutionalised in the Victorian era; Alfred Tennyson held the poet laureateship for over forty years. Some poetry, highly regarded at the time, such as Invictus, is now seen as jingoistic and bombastic but poetry could also be a powerful voice of criticism, as with Tennyson’s Charge of the Light Brigade, a fierce attack on a military blunder. Comic verse abounded in the Victorian era, fueled by an insatiable demand for content from literary magazines. Magazines such as Punch and Fun teemed with humorous invention and were aimed at a well-educated readership. The most famous collection of Victorian comic verse is the Bab Ballads. Husband and wife Elizabeth Barrett Browning and Robert Browning conducted their love affair through verse and produced many tender and passionate poems. Both Matthew Arnold and Gerard Manley Hopkins wrote poems which sit somewhere in between the exultation of nature of the romantic Poetry and the Georgian Poetry of the early 20th century.

Arnold’s works hearken forward to some of the themes of these later poets while Hopkins drew inspiration from verse forms of Old English poetry such as Beowulf. The reclaiming of the past was a major part of Victorian literature, with an interest in both classical literature but also the medieval literature of England. The Victorians loved the heroic, chivalrous stories of knights of old and they hoped to regain some of that noble, courtly behaviour and impress it upon the people both at home and in the wider empire. The best example of this is Alfred Tennyson’s Idylls of the King which blended the stories of King Arthur, particularly those by Thomas Malory, with contemporary concerns and ideas. The Pre-Raphaelite Brotherhood also drew on myth and folklore for their art with Dante Gabriel Rossetti contemporaneously regarded as the chief poet amongst them.

In drama, farces, musical burlesques, extravaganzas and comic operas competed with Shakespeare productions and serious drama by the likes of James Planché and Thomas William Robertson. In 1855, the German Reed Entertainments began a process of elevating the level of (formerly risqué) musical theatre in Britain that culminated in the famous series of comic operas by Gilbert and Sullivan and were followed by the 1890s with the first Edwardian musical comedies. The first play to achieve 500 consecutive performances was the London comedy Our Boys by H. J. Byron, opening in 1875. Its astonishing new record of 1,362 performances was bested in 1892 by Charley’s Aunt by Brandon Thomas. After W. S. Gilbert, Oscar Wilde became the leading poet and dramatist of the late Victorian period.

Wilde’s plays, in particular, stand apart from the many now forgotten plays of Victorian times and have a much closer relationship to those of the Edwardian dramatists such as George Bernard Shaw, many of whose most important works were written in the 20th century. Wilde’s 1895 comic masterpiece, The Importance of Being Earnest, was the greatest of the plays in which he held an ironic mirror to the aristocracy while displaying virtuosic mastery of wit and paradoxical wisdom. It has remained extremely popular.

The pre-Victorian Gothic tales of the late eighteenth century left Victorian readers with a taste for the mysterious and fantastic. These tales often centered on larger-than-life characters such as Sherlock Holmes, Sexton Blake, Phileas Fogg, and other fictional characters of the era, such as Dracula, Edward Hyde, The Invisible Man, and many other fictional characters who often had exotic enemies to foil. These tales eventually developed into the separate genres of Crime and Mystery,Horror and Science Fiction that have remained popular to the present day. 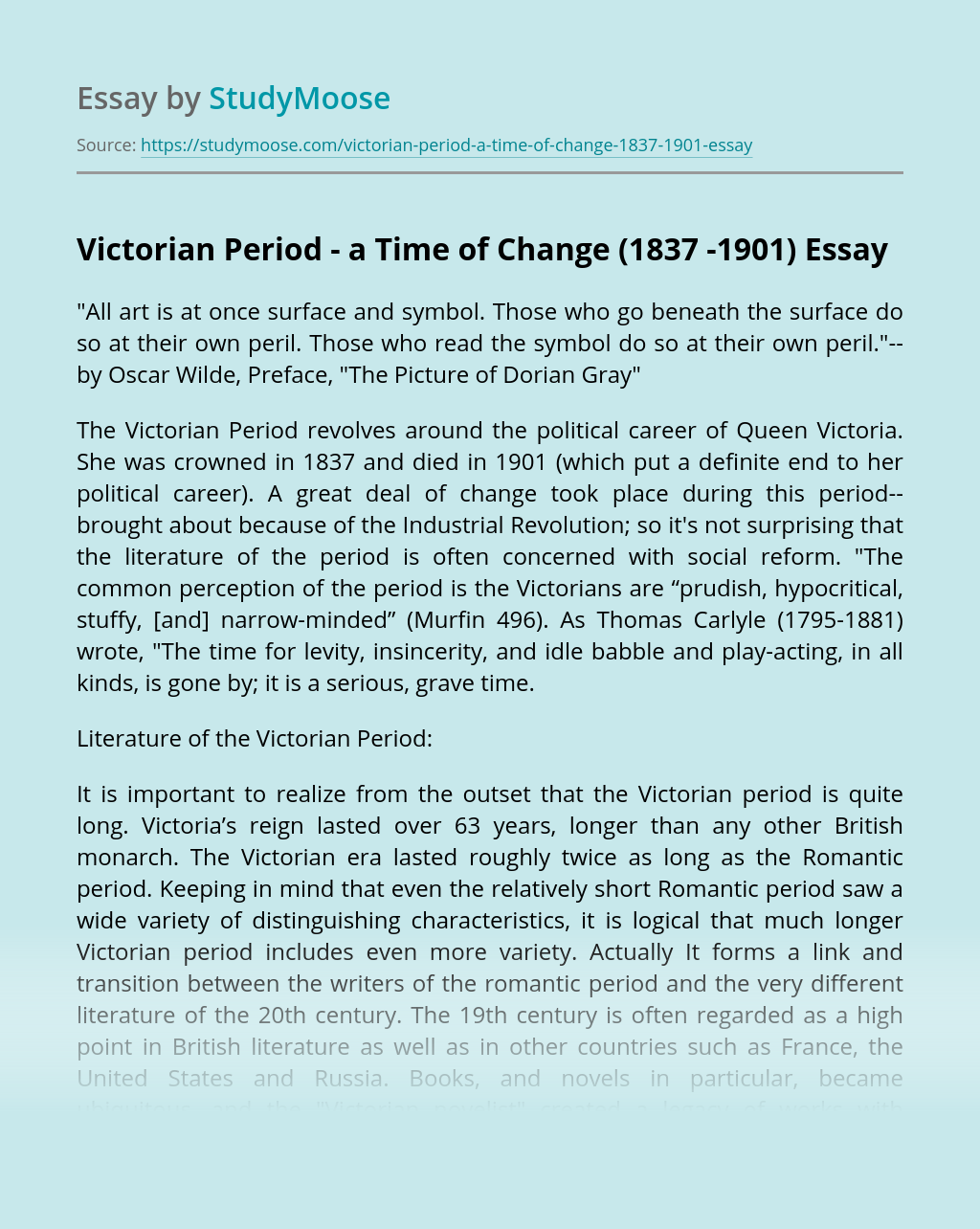