Victorian Era in "The Importance of Being Earnest"

It is this year that Oscar Wilde’s trivial comedy, The Importance of Being Earnest, celebrates its 120th anniversary since the play’s premiere on February 14th, 1895. The play uses humour to reveal the ridiculous and absurd hypocrisy of the Victorian Era. Although this text being 120 years old, its relevance remains significant to today’s society in relation to the rising number of homosexuals that are freely able to express their sexuality.

The Victorian Era is famous for it’s rigorous standards of personal morality and society’s notions on the institution of marriage.

Don't use plagiarized sources. Get your custom essay on
“ Victorian Era in “The Importance of Being Earnest” ”
Get custom paper
NEW! smart matching with writer

The rigid upper-class of the Victorian society consisted of concern for wealth, social status and family position. The division between the upper-class and lower-class was prominently established through the privilege that the upper-class often flaunted.

Oscar Wilde astounded Victorian England with his scandalous behaviour. In his work, he reveals the ridiculous beliefs and ideals of the aristocratic society by insultingly taunting their voguish ways. Despite being an archetypal dandy with a defined sense of beauty, language and intellect, it was within the Victorian society’s narrow views that Wilde did not fit, shamed and imprisoned for his sexuality.

In public, he had adopted himself as a heterosexual man through his marriage but in private, had many homosexual affairs.

Jack Worthing, one of the play’s central characters, has carefully constructed a dual identity in order to escape the undesirable and inconvenient responsibilities he is obligated to maintain out in the country of Hertfordshire. For years, Jack pretends to have a mischievous younger brother, Ernest, who he is always claiming needs to be bailed out of trouble whereas, Jack himself is the reprobate brother Ernest when he escapes from the country to London.

The fictional brother is Jack’s alibi, his excuse to escape the duties of Hertfordshire and indulge in exactly the behaviour he pretends to criticise of his brother.

Jack is constantly accompanied by the expectation to be morally upright and will go to extreme lengths in order to escape these burdensome social obligations. By using this fictious younger brother Ernest, he is once again portraying himself as a serious and dutiful person, this time in the role of an older brother. Jack’s young ward, Cecily quotes, “Dear Uncle Jack is so very serious! Sometimes so serious that I think he cannot be quite well.” (Cecily, Act 2, Pg. 317) This establishes that Jack has so often fabricated such a false persona that he has deceived even the closest of family into believing his dual identity.

Like Jack, Algernon has invented a fictional identity, an invalid referred to as Bunbury, to give him a reprieve from his real life. He uses his imaginary invalid to get out of boring engagements and to provide his life with excitement. As he says, ‘A man who marries without knowing Bunbury has a very tedious time of it.” (Algernon, Act 1, Pg. 302) Algernon is constantly being summoned to Bunbury’s deathbed, which conveniently draws him away from tiresome or distasteful social obligations of London. Unlike Jack, Algernon is much more self-absorbed and frivolous and although he is less morally concerned, he recognises that all the countless invitations to family dinners and gatherings are considered his duties.

Algernon’s snobbish and materialistic aunt, Lady Bracknell, is a tool of conflict and much of the satire is aimed at her. Lady Bracknell presents herself as a stereotypical upper-class woman although before her marriage to Lord Bracknell, she is considered a part of the lower classes in society therefore, she too has a false identity. Lady Bracknell questions Jack’s character after hearing about his proposal to her daughter Gwendolen. Jack will be placed on her list of eligible suitors only if he can pass her interrogation. Her attitudes towards Jack outlines that she only views marriage as an alliance for wealth and social status; love or passion is not part of the mix. One of her first questions, “…What is your income?” (Lady Bracknell, Act 2, Pg. 309) outlines her materialistic concern for social status and wealth instead of what should be, her concern for Gwendolen’s desires.

Victorian Era in "The Importance of Being Earnest". (2021, Mar 26). Retrieved from https://studymoose.com/victorian-era-in-the-importance-of-being-earnest-essay 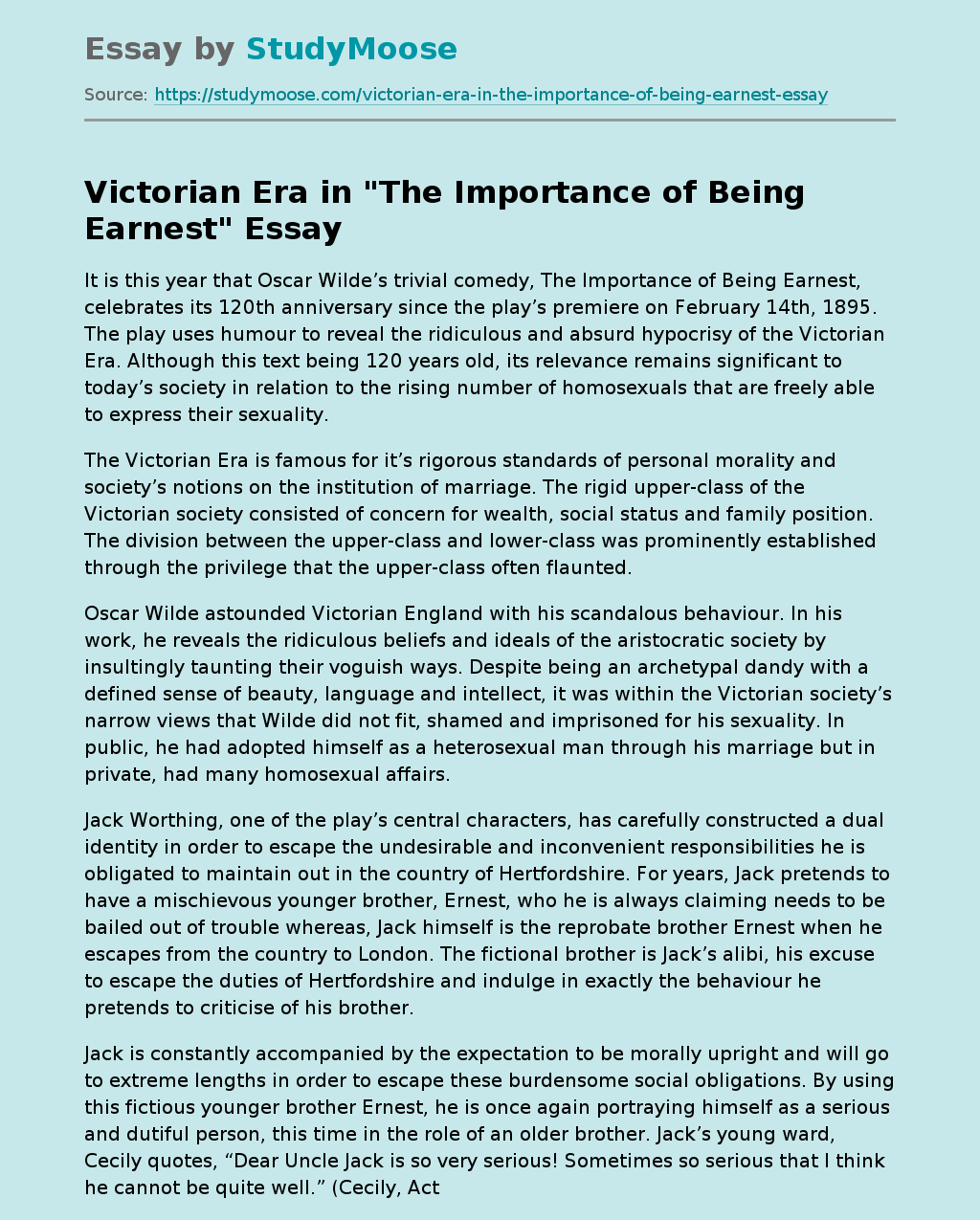