A discussion of mistaken identity in William Shakespeare’s “The Taming of the Shrew”.

Don't use plagiarized sources. Get your custom essay on
“ Mistaken Identity ”
Get custom paper
NEW! smart matching with writer

In Shakespeare’s time, the upper-class often found their amusement in the poorer, more unfortunate lower-class. Christopher Sly was no exception. When the lord finds Sly, a drunk beggar, he immediately plots a practical joke to play on him. The lord, who is very wealthy and obviously has a lot of time on his hands decides to treat Sly as a nobleman and see how he reacts. In addition to ordering his servants to treat Sly as their master, he too pretends to be a servant.

The most amusing part of this induction occurs when Sly becomes convinced that he is indeed a nobleman. When he first awakes, he thinks that everyone is playing a joke on him. After some convincing, Sly gives in and believes that he really was suffering from a long sickness. When Sly asks the page, who is pretending to be his wife to undress and join him in bed, the audience must have reacted with loud laughter knowing that his ‘wife’ is actually the same sex as he.

Although Sly does not understand the lifestyle of the upper-class, it is quite obvious that he is enjoying it while it lasts. There are several cases of mistaken identity present in the subplot which involves Bianca and her suitors. One humorous situation caused by mistaken identity arises in Act I, Scene ii, when several of the characters meet each other. Here, the audience learns how gullible Gremio is when he is tricked by Lucentio into believing that Lucentio is a schoolmaster. Gremio does not realize that he is actually giving a fellow competitor an opportunity to court Bianca. The dramatic irony here is amusing to the audience because they all know that Lucentio is not going to speak highly of Gremio like he had promised. Also, when Tranio, pretending to be his master, introduces himself to Gremio and Hortensio that he too intends to woo Bianca, the two do not realize that Tranio is just there to draw Bianca’s attention away from them. By doing this, his master Lucentio will have a higher chance of courting Bianca. Later in the play, when Lucentio and Hortensio are trying to secretly court Bianca as they teach her, it is comical the way they become suspicious of each other and get in each other’s way. It is not long before the both of them realize that the other is trying to woo her – not teach her. In Act IV, Scene ii, the audience must have had a grin on their face as they watched Tranio effortlessly convince the pedant into pretending to be Vincentio. Tranio makes the pedant believe that he is being nice and doing him a big favor so that the pedant will not be killed: “To save your life in this extremity, This favor will I do you for his sake.” The pedant does not realize that everything Tranio says is false and that he is being tricked into helping Tranio and Lucentio. The final and most humorous part of the subplot occurs near the end of the play. Chaotic confusion arises as all the characters and pretenders meet, and everybody is confused about the real identity of each other. The humor begins as the real Vincentio meets the pedant who is pretending to be him. Vincentio then becomes enraged as his son’s servants, Tranio and Biondello arrive and call him a madman and an impostor. He begins concluding that his son’s servants had killed Lucentio for his money. Arguments and accusations emanate between all the characters. Then, when everything appears to be all tangled up Lucentio arrives and sets everything straight, ending the entertaining confusion. The mistaken identity in the main plot between Petruchio and Kate is the question of who the real shrew is. The audience is first led to believe that Kate is the shrew because of the way she treated everybody. Also, the comments and opinions of the other characters describe Kate to be a very stubborn and negative person. But later, when Petruchio and Kate are married, the audience soon realizes that the real shrew is Petruchio. By observing the way Petruchio treats Kate, it can be noticed that she is no where near as shrewish as he. The mistaken identities used throughout this play have given it a very unique quality. The audience is no doubt entertained by the confusion and chaos between the characters. Even in reality, people tend to always laugh at another person’s confusion. So therefore, if a play is full of mistaken identities, then the audience watching it will unmistakably be amused and laughing frequently. William Shakespeare’s play, “The Taming of the Shrew” definitely, “‘Tis a very excellent piece of work.” 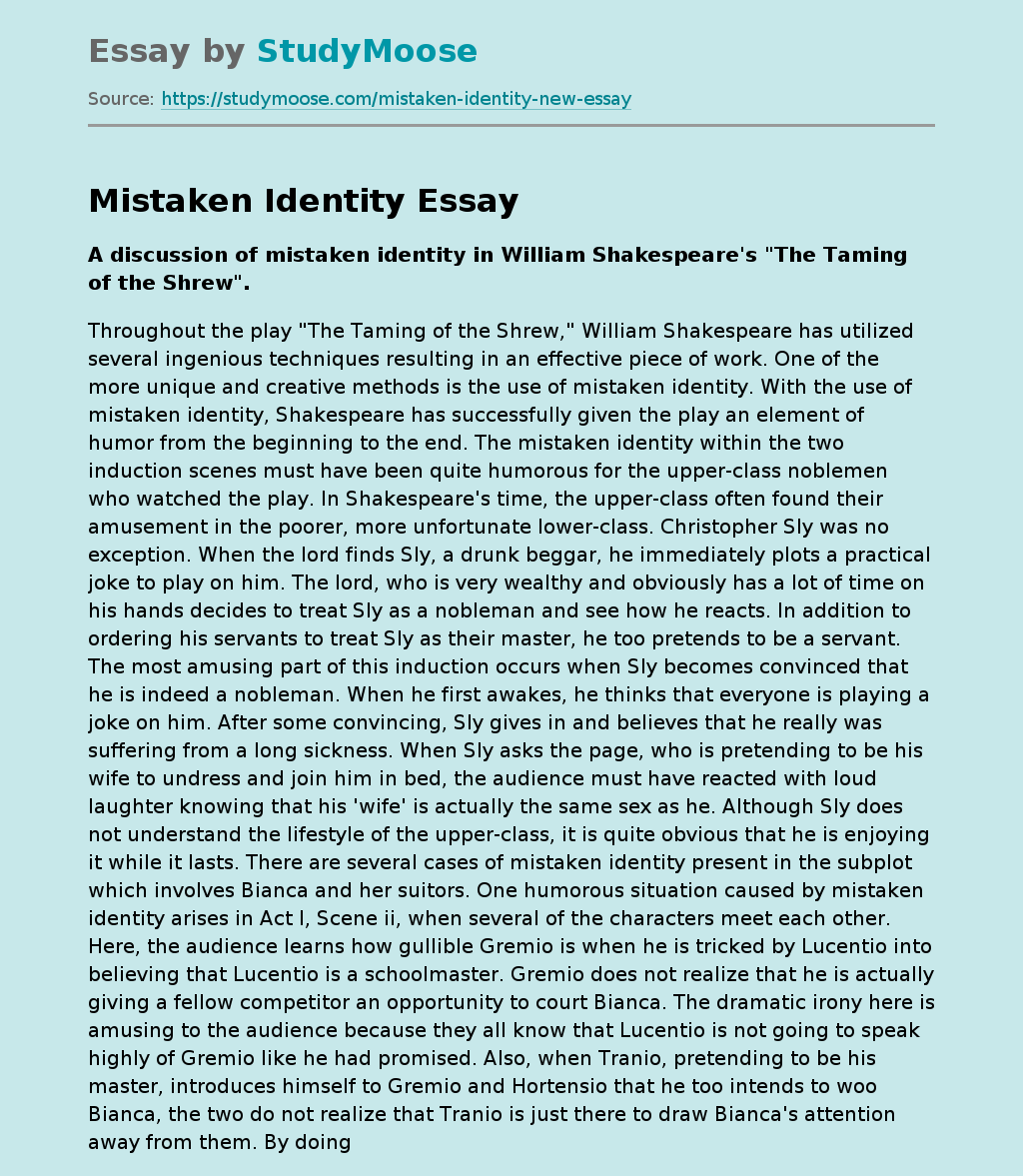