Women play a crucial role in the conflict of Arthur Miller’s play, The Crucible. They are the entire foundation to the play. Arthur Miller’s treatment of women in this play shows women as weak beings who give into their husbands. The way women are treated in this play is a reflection of the Puritan beliefs of that time. Women were believed to have only the job of reproduction, and supporting the family with food. The first example that exhibits this is the way Elizabeth Proctor, John Proctor’s wife, is treated as a character.

Don't use plagiarized sources. Get your custom essay on
“ Arthur Miller’s Treatment of Women in The Crucible ”
Get custom paper
NEW! smart matching with writer

Another example would be how Abigail Williams is a character that is very unique and smart but then again gives into society and is forced to lie to get herself out of trouble. Many other women are known in this story for revealing Miller’s treatment of women. Although many of the women in The Crucible are respected throughout Salem, Massachusetts, none of them have any sort of authority or power over anyone or anything.

Even though they are pure hearted and genuinely good people, like Elizabeth Proctor, Rebecca Nurse, and Martha Corey, they possess no right of authority. All of these women instinctively live to take care of their families and households. This reflects Miller’s treatment of women. In The Crucible, Elizabeth Proctor is a very good wife and mother to her 3 children. She is known in the town as one of the most honest people ever and is very respected by everyone, but, regardless of those things, women are seen by society as second-class citizens throughout the 50’s.

No matter how respected or well-known they are, men always dominate and that is portrayed in the life of Elizabeth Proctor. John Proctor is a man who provides for his family; he is there for support and the kindness of a father.

On the other hand, Elizabeth Proctor is a good mother and a good house wife but always put in her place by her husband and this just demonstrates how dominant the character is. The dominance portrayed in the life of Elizabeth Proctor is an example of what Miller is saying through his characters. The fact that in this time women don’t have as many rights as women do now, shows that Miller is drawn to literature puritanism of that time. In The Crucible, Elizabeth is convicted of witchcraft and I sentenced to prison. Luckily, she is found to be pregnant and therefore not sentenced to hang like most other women that were arrested. The fact that Elizabeth is given the “privilege” to live until her baby is born is just another sign of how Miller portrays the Puritanism into his writing. The Puritans of that time would never hang an innocent baby because they believe that babies are born amoral and have no sense of right and wrong.

Therefore, this proves that Arthur Miller treated women in The Crucible just as other literature periods of that time by being influenced by Puritanism. Another example of a women who undergoes Millers characteristic categorization is Rebecca Nurse. She, along with Martha Corey, is viewed as one the most respected, faithful, godly women in the town but she is accused of witchcraft. The main reason why the most innocent women of Salem are accused is because the people that accused them were aware that they were not willing to confess to a crime they didn’t commit. Therefore, Miller shows Rebecca Nurse and Martha Corey as women who not only are respected by others in the town but also respect themselves that are accused of witchcraft and sentenced to death.

Like mentioned before, women of this era had no right of power and the women that do have authority derive it from manipulation. An example of that is Abigail Williams. She is the main “possessor” of power in The Crucible. She is one the most important characters of this play. She has caused many other women of Salem to go to prison and later be hung because of “witchcraft.” Abigail is a character that is seen as very manipulative and sneaky around authority. She manipulates people into believing her story and she knows how to act differently around authority.

Arthur Miller’s Treatment of Women in The Crucible. (2017, Jan 08). Retrieved from http://studymoose.com/arthur-millers-treatment-of-women-in-the-crucible-essay 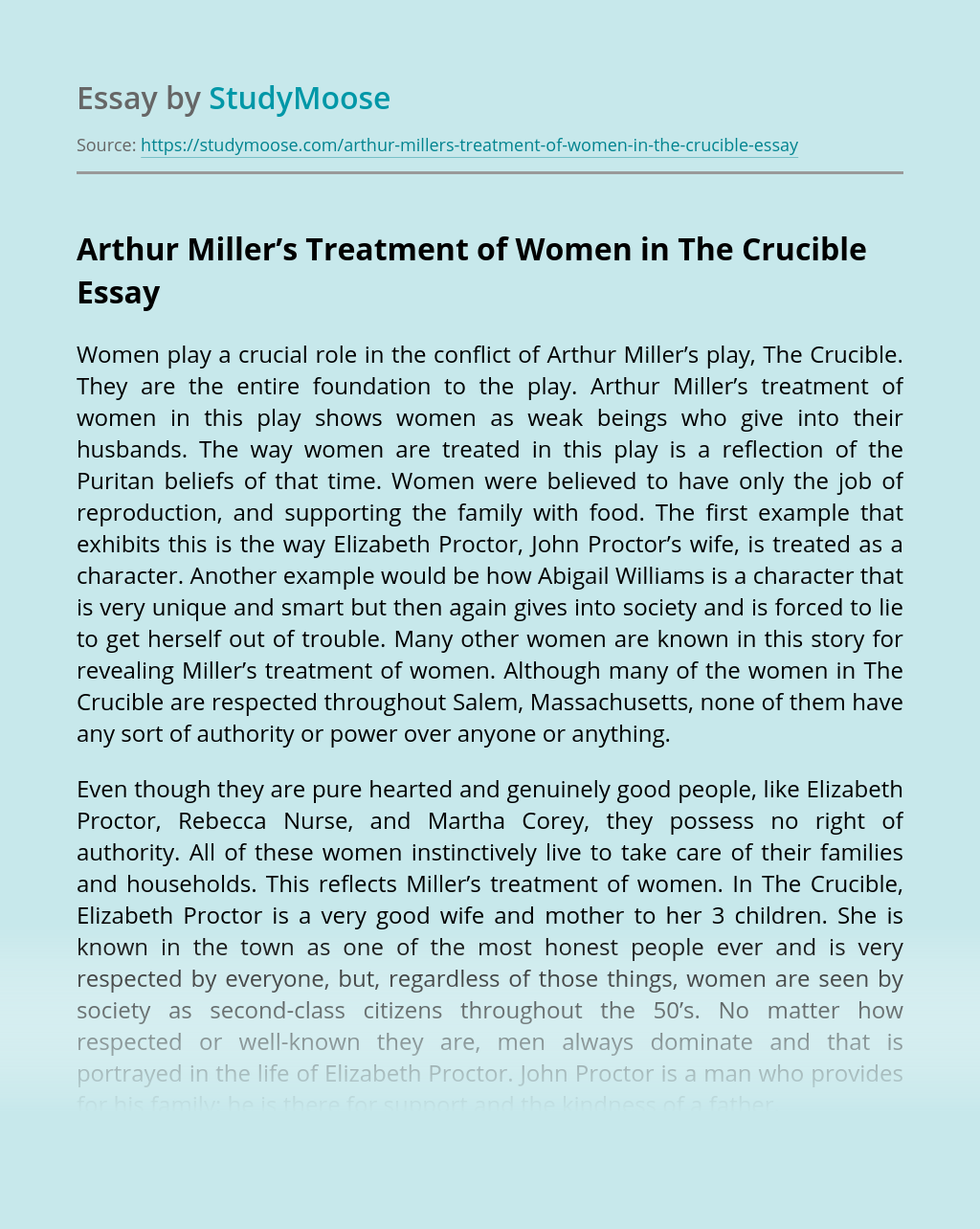