Main Idea and Purpose for Shooting an Elephant by Orwell

The main idea of the story “Shooting an Elephant” by Orwell is the effect of the oppressor is not only on the oppressed, but himself. There are several evidences found in the text to support the main idea. First, the author mentioned about the treatment of a European woman gets when she went to bazaars alone. This explained the freedom of security had been taken away. Since European had colonized Burma at that time, there was growing hatred toward European. Freedom to act also been seize when the narrator was expected to shoot an elephant even it’s not in his wiliness.

Don't use plagiarized sources. Get your custom essay on
“ Main Idea and Purpose for Shooting an Elephant by Orwell ”
Get custom paper
NEW! smart matching with writer

In the story, Orwell had an inner struggle whether to kill the elephant or not. He taught that if the elephant were kept alive, it worth at least a hundred pound. However, if it were shot dead, its tusks only going to worth about five pounds. Moreover, he anthropomorphized the elephant by referring ‘it’ to ‘he’. He said, “It seems to be that it would be murder to shoot him.

”(519) Plus, a life had been killed needs to be considered and there would be possibilities that the elephant will escape again, causing damage to the village. These reasons made Orwell to question his decision.

Another crucial reasoning that drones the narrator to open fire is his identity as an Imperialist that control fellow Burmese. If he did not kill the elephant as the villagers expected, he would be viewed as a coward. This will further affect efforts to enforce law and coded in Burma.

The narrator also described, ‘I perceived in this moment that when the white man turns tyrant it is his own freedom that he destroy,” to show an imperialist had to control or act as what had been expected. These conclude an oppressor would be affected when taking control of others. The purpose of the text is to educate people on the consequences of one’s act.

The author presented his story with hatred and fed up tones as he described how sick he was to serve the Empire. Next, he gave a metaphorical explanation on how he was set to react. He compared himself to a ‘hollow posing dummy conventionalized figure of a sahib’. Like an actor on stage, he forced to do what was expected by the ‘natives’ or audiences. In the story, the elephant also resemble the Empire power. As he shot the elephant, its body just altered but did not fall. After several shot, it fell to the ground. The elephant was dying but not dead. This resembled the Empire diminishing power over Burma.

Main Idea and Purpose for Shooting an Elephant by Orwell. (2021, Jun 13). Retrieved from https://studymoose.com/main-idea-and-purpose-for-shooting-an-elephant-by-orwell-essay 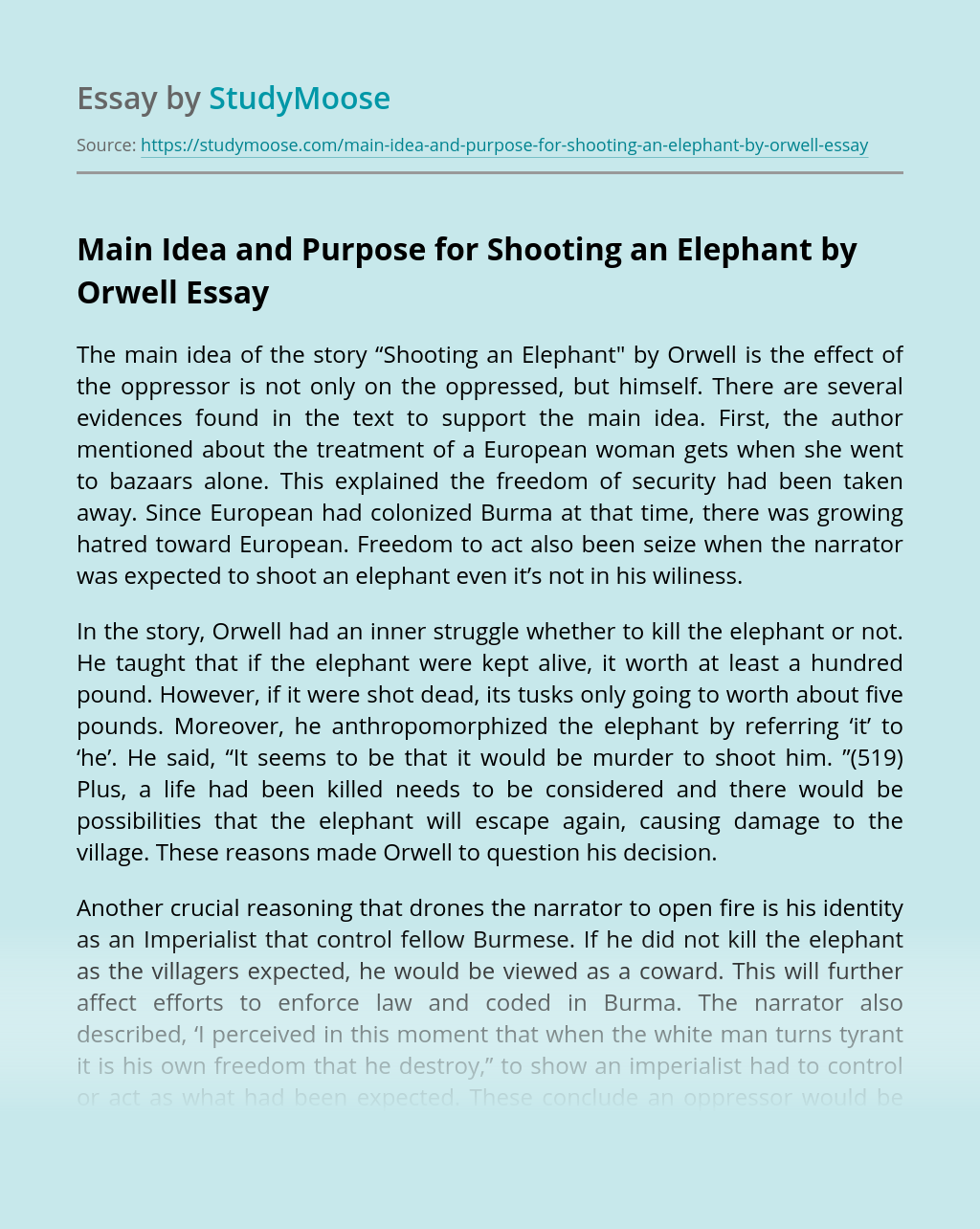