What is a Vegan? According to the Merriam-Webster dictionary, a vegan is a strict vegetarian who consumes no animal or dairy products as food; a person who does not eat any foods that comes from animals. In 1949, early vegans Leslie J Cross suggested that the definition should be “the principle of the emancipation of animals from exploitation by man” (Cross).

Don't use plagiarized sources. Get your custom essay on
“ Why Go Vegan? ”
Get custom paper
NEW! smart matching with writer

This later clarified as “to seek an end to the use of animals by man for food, commodities, work, hunting, vivisection, and by all other uses involving exploitation of animal life by man” (Cross). The food and drug administration is constantly recalling food items due to contaminants related to food handling and production. Deciding what to eat daily is a decision that is made by most people with very little thought given to how food is sourced or what it does to our bodies when we consume it. The world is facing a global warming crisis, lakes and streams are drying up and animals are being pushed from their natural habitats because of man.

Finding a way to exist on this planet and enjoy all the fruits that she provides while not using them up is an issue that I do not believe is taken seriously enough. A vegan strives to only take what he or she needs to survive in the hopes of making his or her footprint as small as possible. Contrary to popular belief, most vegans do not want to tell other people how to live, a vast majority of those who practice veganism only want to serve as a conscious custodian of mother nature’s resources.

The earth’s resources are not unlimited. Here in the United States veganism is growing in popularity especially amongst teens. The younger generation is more concerned about the environment than older Americans are. Social media has been a valuable tool for exposing some of the ways the environment is being harmed by the overconsumption of natural resources. The vegan lifestyle has almost become trendy and hip amongst younger people. The younger segment of society are more in tune with how they impact the world and are far more concerned about overall health. Typically, during conversations, when a person becomes aware that they are in the company of a vegan, like clockwork, they always ask, “if you don’t eat meat, how do you get your protein”? The vegan usually smiles because he or she has come to expect this question to be asked often.

The vegan diet is gaining popularity but there are some things that should be understood prior to taking up this lifestyle. Craig Winston, former professor of nutrition and director of dietetics internship program at Andrews University, points out that “eliminating all animal products from the diet increases the risk of certain nutritional deficiencies” (Winston). Winston’s stance is that a person should regularly consume micronutrients that include vitamins B-12 and D and that it may be appropriate to acquire them elsewhere due to the limited bioavailability of the minerals.

A plant-based diet is simply fruits, vegetables, oats, nuts and seeds. Between 2006 and 2016, in United Kingdom, the number of people who identified as vegan rose 350% to 150.000 to 542,000. The Harris Interactive study commissioned by the Vegetarian Resource group shows that in 2009, 1% of Americans or 3.2 million people reported being vegan or vegetarian, and in 2014 close to 16 million Americans were vegan or vegetarian. Adopting a vegan lifestyle not only contributes to a longer and healthier life, but being vegan also is beneficial to the environment, and promotes protection and safety for animals. Vegan diets are known to help people lose weight. Alina Petre argues that “the vegan diet may help you maintain a healthy heart and may offer protection against type 2 diabetes and certain cancers” (Petre). Alina Petre bases her position on science and list 6 scientific benefits.

Yes, Vegetarian lists numerous sources of protein outside of having to consume animals or animal products. Foods that are great sources of protein include; lentils, tofu, black beans, quinoa, amaranth, soy milk, green peas, artichokes, hemp seeds, oatmeal, pumpkin seeds, chia seeds, tempeh, hemp milk, edamame, spinach, black-eyed peas, broccoli, asparagus, green beans, almonds, spirulina, tahini, nutritional yeast, chickpeas, and peanut butter. A person should consider foods such as any plant-based milk, legumes, and dark leafy green that we usually depend on animals’ products to provide, such as iron, Vitamin D, and protein to maintain a good nutritional balance.
For me, being vegan is something that I have considered lately. My interest in veganism was born out of my desire to make healthier choices as they relate to what I eat. The American Dietetic Association’s stance is that “appropriately planned vegetarian diets, including total vegetarian or vegan are healthful, nutritionally adequate, and may provide health benefits, in the prevention and treatment of certain diseases” (Craig, Mangels).

At first, it was all about becoming healthier, but as I searched the internet for healthier eating ideas, a meatless diet was always at the top of the list of search results. I often asked myself why this was the case since so much of what we see on tv centers around the consumption of animals and animal products. Meat-eating has been sensationalized to the point of exhaustion. On October 26, 2015, the World Health Organization is also known as “WHO”, announced that “processed meats cause cancer” (World Health Organization). The International Agency of Research on Cancer also known as “IRAC” then classified processed meat as a carcinogen something that causes cancer. Hearing this from two very credible organizations certainly gave me a reason to pause. Armed with this new information most people did not even blink an eye. I was puzzled over the fact that for years the argument has always been is beef healthier than pork and vice versa. I grew up in a household where meat was present at every meal and the only vegetable that I can remember seeing frequently on the dinner table were potatoes. I was well into my 30’s before I ever heard of quinoa or kale.

In 2006, the United Nations “UN” calculated that the combined climate change emissions of animals bred for their meat were about 18% of the global total- more than cars, planes, and all other forms of transportation combined. When imagining the process of slaughtering an animal for food, you would have to imagine just how unsanitary and dirty the facility can get. The amount of water consumption required for production must be outrageous. The bi-products and waste and scraps must be disposed of constantly. The water footprint for meat production is far larger than the footprint for crop productions. It is estimated that roughly 200 gallons of water is needed to produce one pound of potatoes, wheat, maize, and rice. Shock is usually the response from most people when they learn just how much water it takes to put meat on their table. Food Tank estimates that the amount of water needed to produce one pound of beef is 1,799 gallons, and one pound of pork takes 576 gallons. Speaking of waste, in 1995 a pig factory in North Carolina had a single spill of millions of gallons of waste into a lagoon which killed approximately 10 million fish and caused a closure of 364,00 acres of coastal wetlands. The unfortunate thing is incidents like this happen all too often; they just do not make the evening news because it is not important to enough people.

In September of 2016, major dairy companies were ordered to pay $52 million dollars in an antitrust class-action lawsuit. It was revealed that these companies strategically slaughtered 500 million dairy cows simply to reduce the industry’s supply which could and did increase the demand for milk and drove prices up. In pig slaughterhouses, electrocution is preferred killing method. When that method fails, the pigs are usually smashed in the skull with a sledgehammer. In beef slaughterhouses, the animals are forced into an assembly line where they are hung upside down, the animals’ throat is then cut, and the animal is left hanging upside down until it bleeds to death. Somewhere in our history, we placed cats and dogs on a pedestal higher than that of pigs, chicken and cows. In my mind they are no different and to allow pigs, chickens, and cows to be slaughtered let alone inhumanely seems hypocritical.

There is not a day that passes that there is not some type of recall by the Food and Drug Administration. The race to produce more, cheaper, and faster has led to poor quality at the source and has seen recalls on items that have never been recalled before. Animals are being injected with hormones and plants are being genetically manipulated to increase yield. Some of the fruits and vegetables that I used to pick fresh from the tree or off the vine when I was young have become harder to find in their natural habitat. Vegetables seem to go rotten quicker after purchased and most meats come packed in containers that have them covered in preservatives. Then there is the infamous pink slime that is added to beef products as a filler or to reduce fat content. Very rarely do I drive by pasture and see livestock freely grazing. Obesity in the world is high and school-aged children are being served meals that are totally different than the ones that I was served when I was in school. Being vegan has always been a lifestyle that seemed odd to me. Adopting a vegan lifestyle would not be easy for me, but I know that I must make better decisions when it comes to my eating habits and the type of environment I want to leave for my grandkids. I have been a super consumer of meat for my entire life. I eat meat every day and no meal is complete without meat. I never gave any thought to the animal that gave up its life to feed my addiction or the impact that my selfish choices have on the environment. Up until now I had no desire to do the right thing and so I consumed, consumed and consumed some more. I am optimistic that the research I did putting this assignment together will serve as my launching pad to a healthier lifestyle. 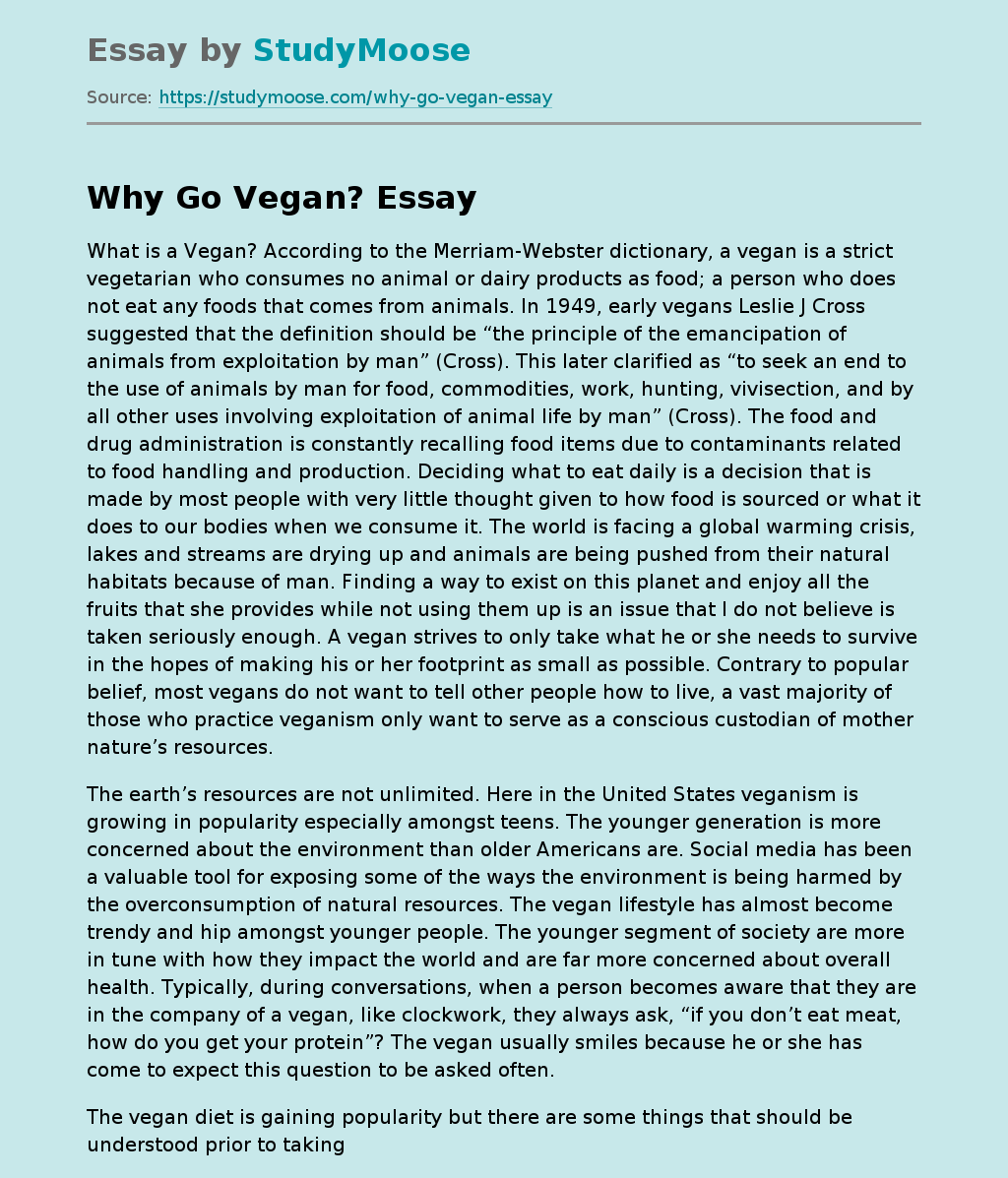