Gary Yourofsky is a vegan activist. He is a strong speaker on the issue. Gary has given over twenty three hundred speeches across the country. In his speeches he presents the argument against consuming food made from the innocent slaughter of animals. He details horrible cruelty that is inflicted upon these animals. While Gary delivers this message he shows the listener an alternative lifestyle that doesn’t involve the consumption of animal byproducts. Gary gave examples that appealed to authority when explained how the basic food groups that are taught in schools were created.

Don't use plagiarized sources. Get your custom essay on
“ Vegan Argument ”
Get custom paper
NEW! smart matching with writer

How the meat, egg, and cheese industry created the chart that kids are taught. He said children learn to eat meat from outside influences and not by themselves. Humans are herbivores and not carnivores. Gary told the class how actors in advertisements for meat seem to act as though they are in love with eating meat. The speaker used many examples to appeal to the students emotions.

After he gave a brief introduction to the class he asked “how would you like to know the day you were born your execution date has already been decided? Then he played a four minute video showing the atrocities happening in the meat, egg, and cheese industries.

This video showed the graphic torturing and killing of animals. After the video ended Gary described the killing of many other animals by the food industry. He talked about how people need to view this subject from the victims’ point of view. In Gary’s argument he said “when we were young we loved all animals and protected them with everything”.

He told the class that 98% of all animals are killed by the meat, egg, and cheese industry. Gary speech contained multiple examples appealing to logic or reason. He said that animals do not belong to us and how discrimination is across the board. He described how the food industry rapes female animals and steals their children. Gary described eggs as chicken periods and honey as bee vomit among other descriptive examples. He explained what a vegan is and how they do not consume any of the products made by the torturing or killing of animals.

The argument to stop killing and eating animals given by Gary Yourofsky was presented with educated view on the subject. During his speech that I felt was very effective, I noticed a physical response in other students to the descriptive examples the speaker used. Although I thought the video was too explicit and possibly turned off some students, I do believe his argument changed the way the students will decide what they eat. He gave the students a brief education in animal rights, and because of this, through his speech some innocent animals might have be spared. 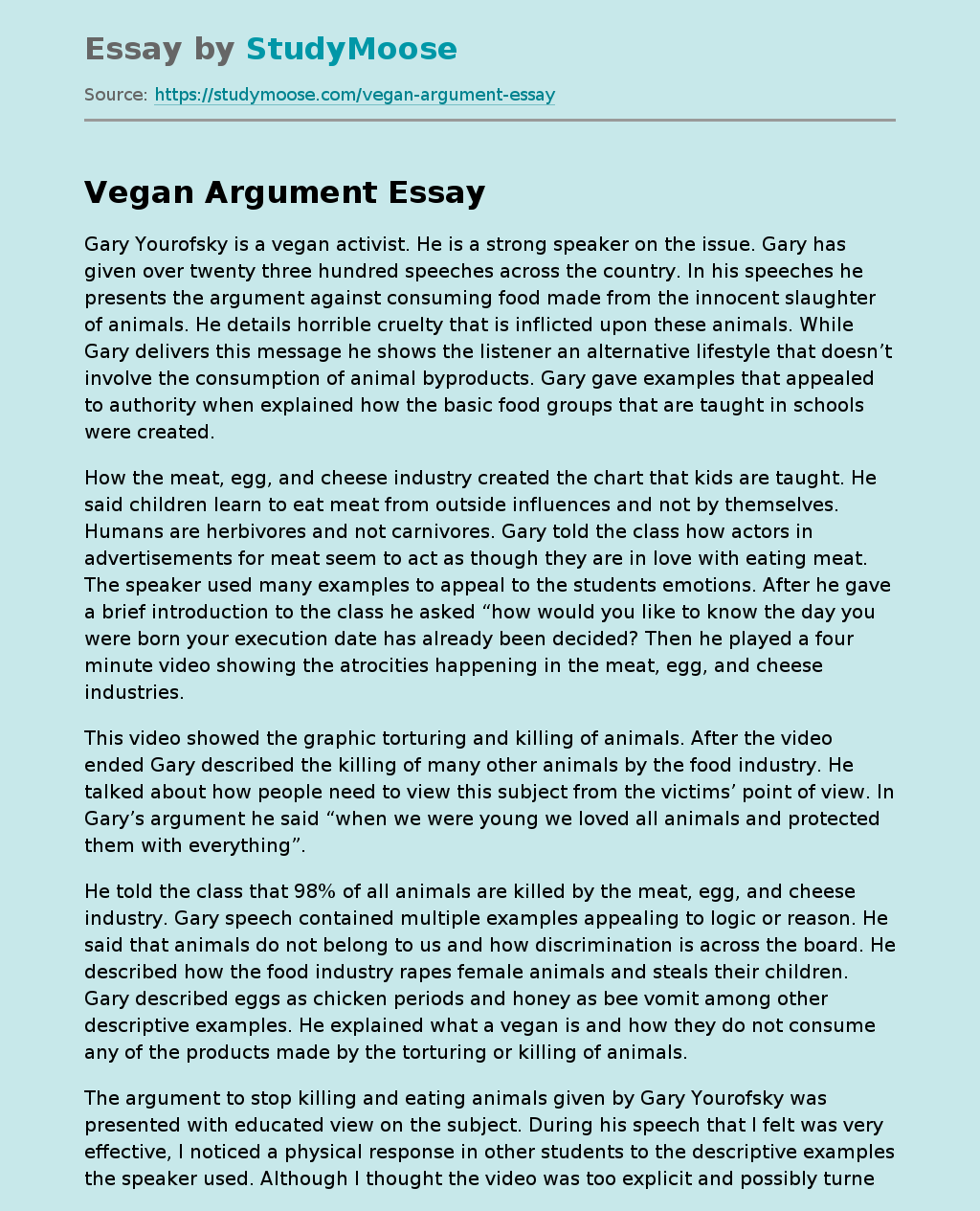