“Strange Objects” by Gary Crew gives the reader the ability to think about many aspects of the novel in an abstract way. If read with an open mind, the reader can uncover many secrets of the novel, as well as some of the themes which the author would like you to discover. The plot, characterization, setting and conflict help to show the theme of ‘history repeating itself’. This is portrayed in the novel through what happened to Jan Pelgrom in the past, repeating itself with Steven Messenger in the present.

Don't use plagiarized sources. Get your custom essay on
“ “Strange Objects” by Gary Crew ”
Get custom paper
NEW! smart matching with writer

The stories of Pelgrom and Messenger that develop in Strange Objects run along parallel plotlines in the novel. In the story from the past Jan Pelgrom found a ring that glows, he got sick, broke away from Wouter Loos and killed a female Aborigine. In the story from the present, Steven Messenger also found the same ring that glows, became ill, distanced himself from his mother and society and killed Charlie Sunrise (an Aboriginal male).

A cannibal pot, hand and ring were crucial objects in both stories. The two storylines show very similar events caused by the ring. Clearly, it can be seen that the past and present are linked and history is therefore replicated.

Characters are the important people used to tell the story. They not only develop in personality through a novel but can do things such as help highlight crucial themes as well. In Strange objects the holder of the ring in both the past and the present undergo many physical and mental transformations linked to the ring.

Evidence of this is how Steven Messenger’s health deteriorates during the course of the novel, as it states that he ‘had a bad chest, and was getting worse.’ Also, after running away when Charlie spotted him in the cave, Messenger vomited up phlegm and blood, and the ring went warm. The book shows that Jan Pelgrom, the young accomplice of Wouter Loos, wore the ring around his neck too and suffered similar consequences as Messenger. Pelgrom began to develop a bad fever and started to cough and wheeze. The ring bringing illness to Pelgrom and Messenger in two different time periods shows the theme of history repeating itself enter the novel in an intricate way.

Another example of this is the sudden odd behaviour of the two characters. They both started normal, but when they find the ring their behaviour changed. Steven Messenger changes from an adventurous kid to a cold, distant character. Jan Pelgrom also distances himself from other people. Their behaviour is very similar and shows the repetition of history.

A final example of the historical link between Pelgrom and Messenger is their love for the ring and not wanting to give it away. Both ring holders go to very drastic measures, to the point of committing murder, to ensure the safety of the ring.

The setting of the novel describes where the events take place. In both Pelgrom’s and Messenger’s story, the setting is in isolated areas of Western Australia, with Aborigines nearby. Therefore, due to the similarities we can see history recurring and the history aiding in revealing this theme.

Conflict is defined in the Oxford dictionary as ‘a serious disagreement or argument, an incompatibility between opinions’. In Strange Objects both storylines have conflicts such as killing, fighting and conflict caused by lack of trust. Messenger becomes a more defensive person because he wants to keep the ring for himself. There is conflict with his mother by getting a lock on his door from Kratzman to keep her out, not giving any information about the ring to Hope Michaels and Sgt. Norman. In Pelgrom’s case, it is people like Wouter Loos that he does not trust.

Like Messenger, Pelgrom becomes defensive to keep the ring and major conflict is shown when he swings an axe near Loos to ensure the ring’s safety. The conflict in the novel continues when Pelgrom kills an Aborigine and Messenger does as well. These similar conflicts happen in two different periods and therefore show how history can recur.

“Strange Objects” perplexes and teases the reader after it is read and gives you the ability to think about what happened after. The similar plotlines, characters, setting and conflict used by Gary Crew link things and people within the novel. The conventions used in the novel link the past with the present and bring out the theme of history repeating itself. 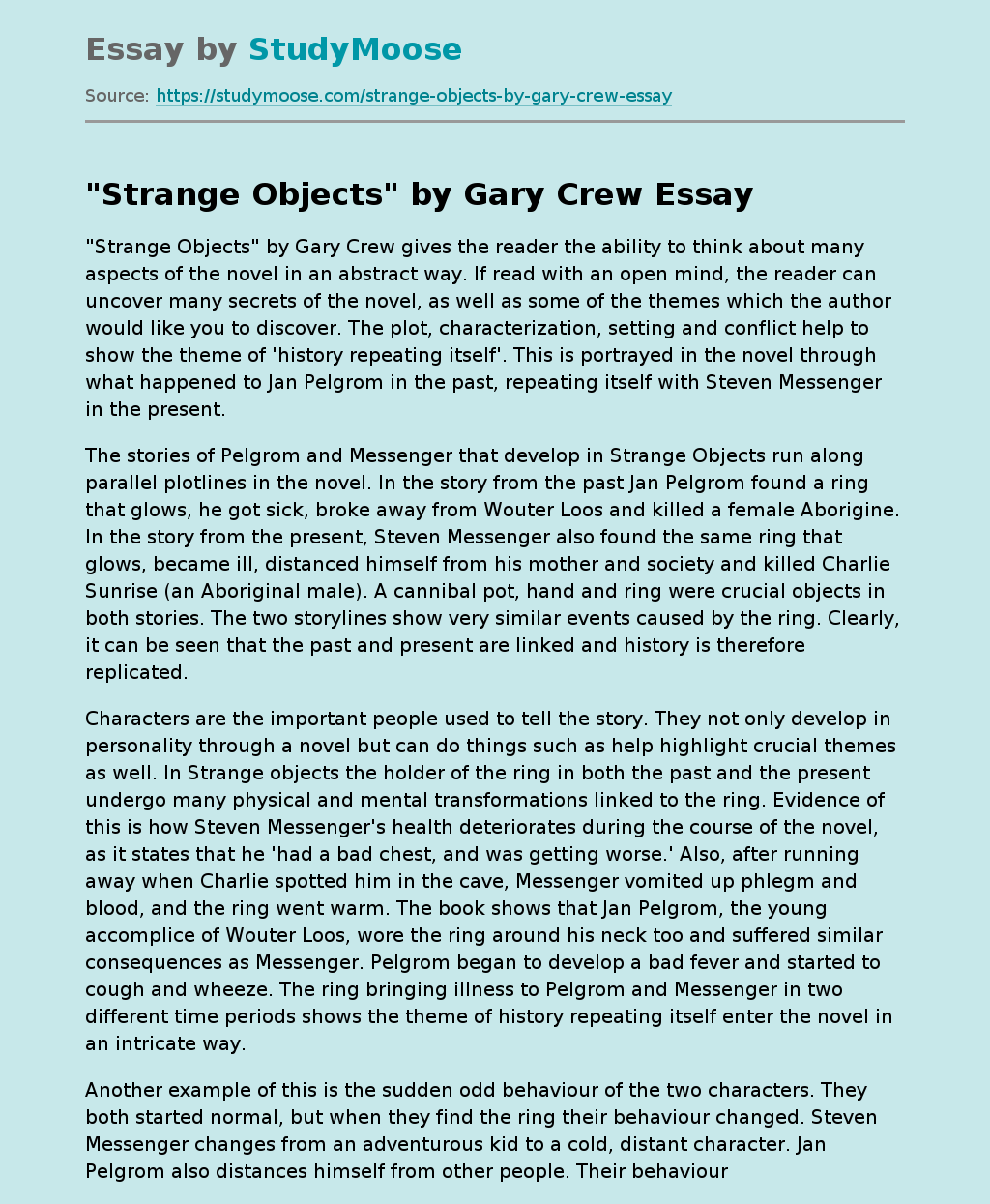