Oranges by Gary Soto is about the narrator who is going back in time to when he was 12 years old. He talks about his thoughts and emotions and explains the bittersweet experience of his first date with a girl. Though it is a cold and grey day in December the two oranges in his pocket helped him through his nervous experience symbolizing warmth, hope and confidence. Soto does a great job showing us how an adolescent love can influence you to be selfless and make sacrifices that in the end are worth while.

Don't use plagiarized sources. Get your custom essay on
“ Oranges by Gary Soto is about the narrator who is going back ”
Get custom paper
NEW! smart matching with writer

The first lines of the poem makes it clear that the boy is 12 years old as Soto uses vivid imagery to set the plot. He begins with a gentle conversational tone that is used throughout the poem. The boy is on his way to his first date and has two oranges in his pocket as he walks he expresses, frost crackling beneath my steps, my breath before me, then gone.

Soto uses onomatopoeia which describes a sound and can actually sound like the word being described by using the word crackling” to express the sound of cold frosts and ice falling down onto the ground as he makes his steps. You can almost feel the coldness as you imagine yourself outside breathing and seeing it right before you every cold winter in December. You can imagine how nervous he may be (as one always is on their first date) as he is on his way to her house the one whose porch light burned yellow night and day, in any weather.

You can tell he has had a crush on her for a while and pays attention to every detail about her including the porch light outside her house. A dog begins to bark at him but then zones it out once she steps outside her house face bright with rouge.

Rouge is a red color powder used as makeup to brighten up and color the cheeks and lips. This shows her innocence yet her nervousness as well as one tries to look their best on their first date. He is so mesmerized by her once she walks out that he no longer hears the dog barking and can’t help but smile at her. They begin to walk together as he leads the way by touching her shoulder. This simple touch is so innocent yet everything to him that is more than enough as their date begins. Soto uses the line of newly planted trees  as a great metaphor for the blossoming relationship of the boy and the girl as they are walking together on their first date.

Once planted, a tree is not fully developed yet and neither have they but they will shortly. They arrive and enter at a drugstore to which the tiny bell rings letting the sales lady know she has costumers. He turns to the aisle of candies and asks her if she wanted anything. He expresses after asking her that she had light in her eyes, a smile starting at the corners of her mouth you can tell how special she felt once he asked her what she wanted. He is very sweet to her and polite and shows how much he cares and wants this date to go perfect. She picks a chocolate bar that costs a dime when he only had a nickel. This is where the oranges come to play. Him wanting to get the chocolate for her, places the nickel on the counter and adds one of the oranges from his pocket hoping the sales lady would take it in exchange for the chocolate. When I looked up, the lady’s eyes met mine and held them knowing very well what it was all about,  the orange no longer represented just a simple orange. Soto uses them as representation of love and hope. He shows how genuine people can be as the lady accepted the orange knowing how much it meant to him to buy her the chocolate.

Though he couldn’t pay for the chocolate the lady doesn’t embarrass him and rejects the orange but instead understands what is going on between the boy and the girl. This represents hope because it gives him the courage to go on with his date and giving him the hope that it’ll blossom to something more. They both leave the drugstore and return to the cold weather. Soto uses the smile, fog hanging like old coats between the trees (45-46) to give us an image of how thick the fog is that may obscure ones vision to make it seem like coats are hanging from the trees.

The mood of the poem begins to change as the boy goes from nervous to confident and now refers her as my girl (47) instead of the girl and grabs her hand for two blocks then releases it so that she can unwrap her chocolate. He starts to peel the other orange that was in his pocket in which he uses a metaphor when he states, so bright against the gray of December that from some distance someone might have thought I was making a fire in my hands. (51-56) The orange now represents warmth as he tends to express the orange as a gleaming energy of love though it being dark and grey outside, it is bright and warm like “fire” that he wants everyone to see which is him and the girl.After reading the poem, the simplicity of it all is what makes Gary Soto’s Oranges sobeautiful.

Though he is not necessarily rhyming he uses a gentle conversational tone that you can barely tell. His words, and phrases are clear as he wants the reader to understand and also imagine the experience he went through by using vivid imagery. Soto does a phenomenal job taking you back to when you had your first crush. You feel the butterflies as he brings you onto this rollercoaster of emotions associated with first love. Soto not only takes us back to your first crush but also reminds us how one can be selfless when being in love. In addition, something as simple as an orange can transform into a beautiful memory due to the meaning behind it that will remain with you forever.

Oranges by Gary Soto is about the narrator who is going back. (2019, Aug 20). Retrieved from https://studymoose.com/oranges-by-gary-soto-is-about-the-narrator-who-is-going-back-essay 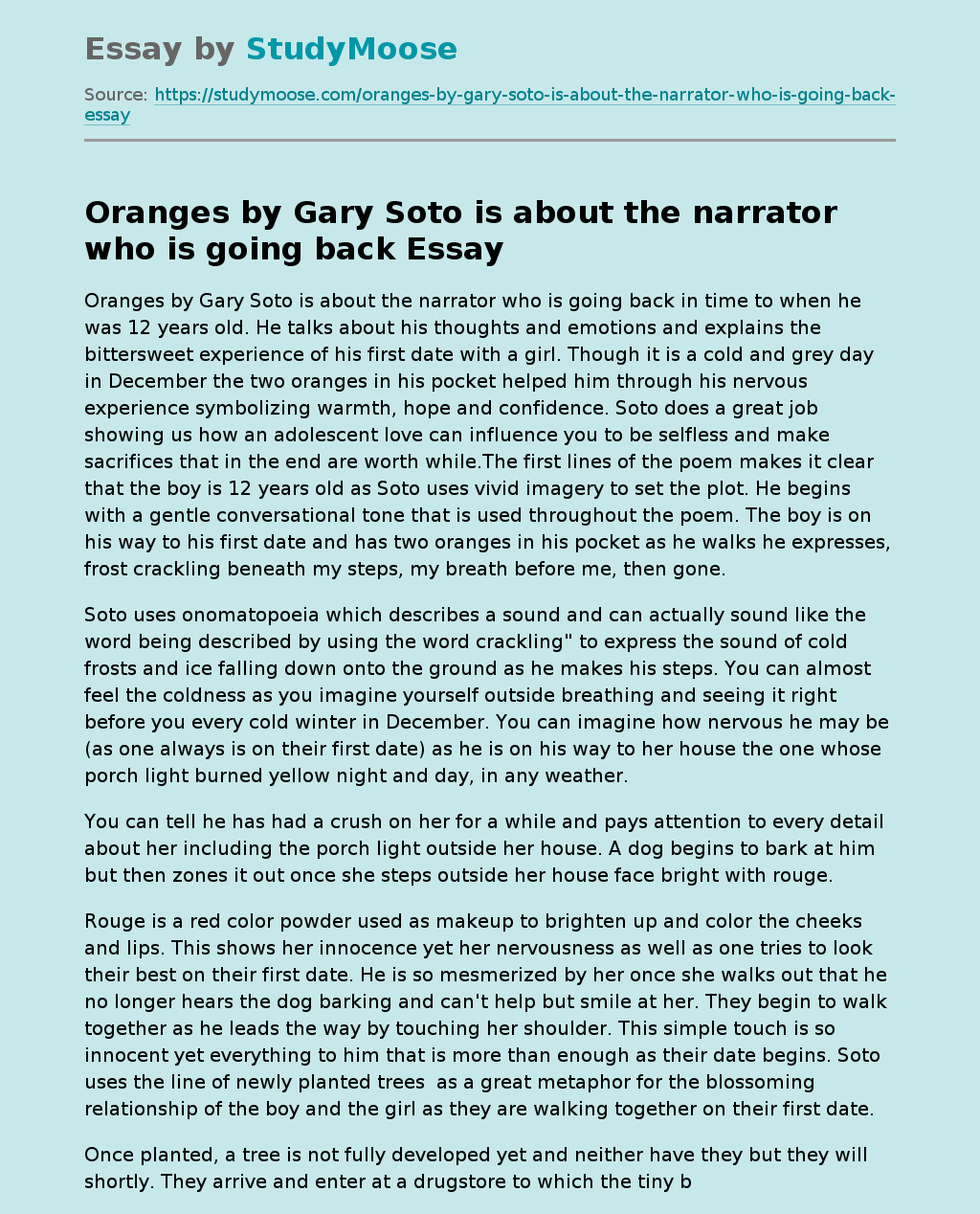