The natural world is superior to all of humanity. Without reason, land controls us and influences our identities. Through mankind’s power we try to suppress the natural world but never truly succeed. “Progressive Insanities of a Pioneer” by Margaret Attwood, “The Bull Moose” by Alden Nowlan and “Not Just a Platform for my Dance” are comparable poems in a way that all three deal with a theme of the natural world and the power it holds against mankind. “Progressive Insanities of a Pioneer” and “The Bull Moose” both express that nature is more prevailing than humanity and that humanity will unsuccessfully try to conquer the natural world.

Don't use plagiarized sources. Get your custom essay on
“ Man vs. Nature ”
Get custom paper
NEW! smart matching with writer

Although, “Not Just a Platform for my Dance” displays how cooperating with the superiority that nature possesses can be favorable to civilization.

In the poem “The Bull Moose”, Alden Nowlan writes of human’s separation from nature that signifies the Bull Moose as nature and the observers as mankind. Nowlan uses the poem as a depiction of how man has removed himself from nature, and by doing such; humans are isolating themselves from the assets that make them truly human.

He illustrates this by man’s lack of awareness of the Bull Moose’s greatness, the “pole fenced pasture” between the two worlds, and the power of the creature’s roar. Eventually mankind recognizes that he is not “shaggy and cuddlesome” but a “scaffolded king”. Civilization arrogantly approaches nature by attacking the self-righteous dominance they feel towards it.

In “Progressive Insanities of a Pioneer” Margaret Atwood captures the theme of a civilized urge to ignore the superiority of the natural world. “In the darkness the fields / defend themselves with fences / in vain: / everything / is getting in.” The dilemma of the pioneer is made clear when he is described as “a point/ on a sheet of green paper” in the first lines of the poem. It is suggesting outer space “with no walls, no borders / anywhere; the sky no height / above him, totally un- / enclosed”.

But the pioneer, who has declared himself to be at the center of this infinite system of things, cannot handle it and cries “Let me out!” The irrationality of the pioneer’s pursuit is distinguished here, because there can be no escape from the vastness of the universe. The pioneer “dug the soils in rows/ imposed himself with shovels/ he asserted/ in to the furrows” trying to influence nature the way he wanted but instead, “the ground/ replied with aphorisms:” and nature once again over ruled mankind. He suffers deeply with feelings of separation because of the connection he refused with nature.

While “The Bull Moose” and “Progressive Insanities of a Pioneer” are about man vs. nature, “Not Just a Platform for my Dance” portrays the coherence that can occur between the natural world and humanity and how it can favor man. Dumont acknowledges that land is more than a possession or “just a place to set my house my car my fence” but an idea of identity. Human and nature are joined as one and Dumont expresses that by “this land is/ my tongue my eyes my mouth”. By cooperating with nature, it becomes favorable for her spiritually “are my prayer”, physically “they are my medicine” and creatively “and they become my song”. She values the “headstrong grass and relenting willow” and proclaims that “this land is not/ just a platform for my dance” nor just a place for her to exist but a place to enjoy the magnificent beauty of the world.

“Progressive Insanities of a Pioneer” and “The Bull Moose” both express that nature is more powerful than humanity and that humanity will unsuccessfully try to defeat the natural world. Although, “Not Just a Platform for my Dance” displays how cooperating with the control that nature acquires can be positive to civilization. In “The Bull Moose” humanity doubts nature and in “Progressive Insanities of a Pioneer” humanity resists it where as in “Not just a Platform for my Dance” humanity accepts the natural world. “The Bull Moose” comes “lurching” and “stumbling” in ponderous and powerful strides to “the pole-fenced pasture”- the edge of civilization where he is mistreated.

The man in the “Progressive Insanities of a Pioneer” refuses to adapt to his environment, and attempts to separate himself from it. He cannot stand the un-enclosed space around him, so he builds boundaries and “The house pitched/ the plot staked/ in the middle of nowhere” to withdraw himself from nature and to keep it out. “Not Just a Platform for my Dance” steps aside from man vs. nature and recognizes that “this land is/ my tongue my eyes my mouth”; humans and nature are one. Man’s responsibility for his physical body is interrelated to his responsibility towards nature. To take care of his overall well being can be accomplished without repulsion to the natural world. 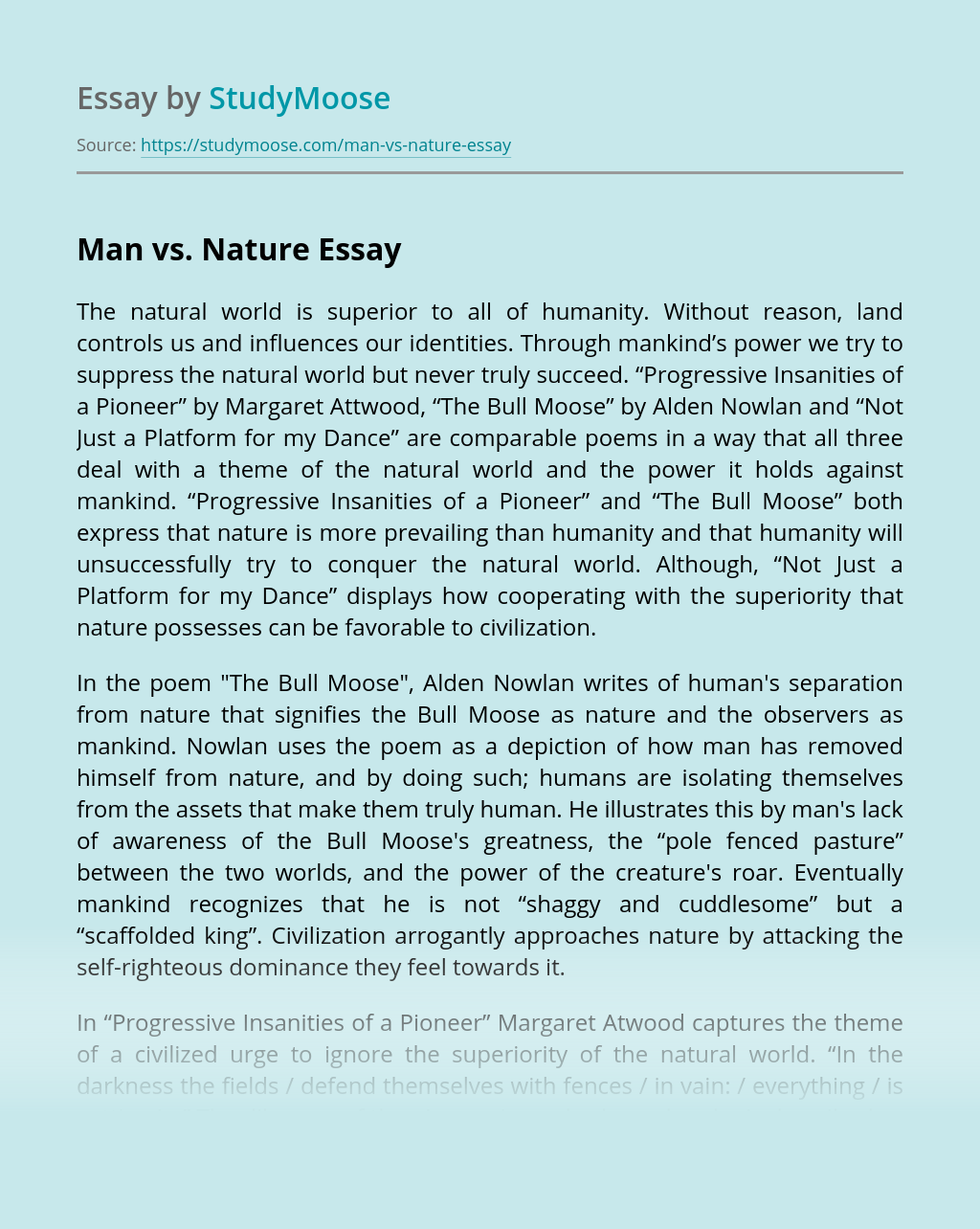