When Manchester first built its big mechanized cotton machine, it became the leading textile manufacturing city in the whole world. Much of its population in 1850s was made up with the working class and immigrants from parts of Britain and even Europe. In 1851, it was granted a royal charter after Queen Victoria’s visit. The Reform Bill granted Manchester representation in parliament and middle-classmen the right to vote. All this was due to the exponential growth of Manchester during the Industrial Revolution.

According to the Encarta World English Dictionary, Industrial Revolution was the period when U.K. went through social and economic changes that involved widespread adoption of industrial methods of production. The specialization of tasks, the concentration of capital, and the centralization of work forces were important aspects of these changes. The major factor in the growth of Manchester was the Industrial Revolution. As a result, many issues were raised and there were many reactions to it. Some of the main consequences of the growth were: increase in pollution/degraded living conditions, atrocious working environment, and repulsive appearance of the whole city.

One of the biggest problems due to the growth of Manchester was increase in pollution, which resulted in bad living conditions. As Edwin Chadwick, a public health reformer, states: Diseases caused by atmospheric impurities and close and overcrowded dwellings [plus] filth and bad ventilation [result in] loss of life [that] is greater than loss of death from death or wounds in modern wars. The point of view of Chadwick is factual and not biased as he is a public health reformer and would correctly point out the living condition in Manchester.

The statement above shows us that the filth and the diseases took a heavy toll on people’s lives (Doc. 6). This fact is further supported by Document 8, which shows the average age of men at death. According to the document, the average age at death of a gentry/professional is 38, farmer/trader is 20, and laborer/artisan is 17! This means that the living conditions were really bad that people were dying so young in industrial districts, especially in Manchester. This chart is may not be fully accurate (due to the advancement in technology at that time), but it correctly gives us a basic idea of how low the average age of a man was at that time as it is made by a medical reformer. Document 6 also exemplifies the fact that Manchester was heavily crowded.

Document 1 is a great example of that fact. We see that in 1750, Manchester was a small town with little or no businesses set up. However, in 1850, Manchester has enormously grown and there are factories everywhere, so close by and tight that one could just imagine going through one of these crowded streets. This map depicts an accurate picture of Manchester during the 1750 and the 1850. The crowded city can also be seen in The Graphic, a weekly magazine dealing with social issues that shows a view from Blackfriars bridge over the River Irwell. In the picture, we can see the crowded living environment (the buildings) and also the immense amounts of pollution being put into both air and water.

This picture illustrates the terrible living conditions in Manchester. The viewpoint of this picture is non-biased as it demonstrates the social issues (Doc. 11) As a visitor to Manchester, Alexis de Tocqueville is impressed by the production, but is baffled by the fact that Nowhere do you see happy ease taking his leisurely walk in the streets of the city or going to seek simple enjoyment in the surrounding country. This shows us how busy the workers were, and the living conditions were pretty bad: Foul drain, filthy sewer were some of the words used by Alexis to describe Manchester. It can be argued that because he is French, his perspective is biased against Manchester and that he might be exaggerating some of the events (Doc. 5).

Atrocious working environment was another problem, which rose as a result of development of Manchester. French socialist and women’s rights advocate, Flora Tristan, personally saw the workers working without basic amenities: workers lack clothing, bed, furniture, fuel, even potatoes! They spend 12 to 14 hours each day shut up in a low-ceiling rooms they are all sickly and emaciated, their bodies thin and frail, their limbs feeble, their complexions pale, their eyes dead. This is the horror that Flora Tristan witnessed; people were working more than half a day with no food, clothes, and the working conditions were full of toxic air and other harmful substances. Her standpoint in this statement can be said as being non-biased as she is a socialist and thus, she cares (Doc. 7).

People reacted violently to these conditions, which forced the government to pass the Ten Hours Act, which limited the number of hours a worker could work to ten hours a day. This resulted in better condition of the workers. William Abram, a journalist and historian, noticed, the condition of the factory laborers has been vastly improved (Doc. 10). This shows the result of the reaction of the people. The point of view of William Abram is factual and accurate as he is a journalist and a historian, and his work is to provide people with the truth. As witnessed by Frances Kemble, actress, poet, and dramatist, people were [s]houting No Corn Laws when she arrived in Manchester during the inaugural of railway. This shows the reaction to the wages that workers got before some reforms in Manchester (Doc. 4). Document 10 also states that the [w]ages thanks mainly to improved working conditions have largely increased. This further backs up the fact that due to these reactions, workers got more money.

Once the Industrial Revolution had completely transformed Manchester, from a small town to a crowded industrial district, there was no way Manchester was going to retain its beauty. The Graphic, a weekly magazine dealing with social issues, shows us a frightening view from Blackfriars bridge over the River Irwell. All we see is smoke coming from factories, and sewage being thrown into water. The is pollution everywhere and Manchester just looks like a dead city! The viewpoint of this picture is non-biased as it demonstrates the social issues (Doc. 11). According to Robert Southey, an English Romantic poet, buildings in Manchester were without their antiquity, without their beauty, without their holiness when the bell rings, it is to call [workers] to their work instead of prayer. Southey states that ever since Manchester became industrialized, it became ugly and lost its holiness. As he is a romantic poet, he cares about nature, religion, is clearly against the Industrial Revolution.

Therefore, his view is biased (Doc. 2). Thomas B. Macaulay, member of Parliament and a historian, argues that even if Manchester isn’t a pleasant sight, a peasant’s cottage wasn’t ornamented with box-hedges, flower-gardens, beehives, and orchards. This shows us how industrialized city was no better than a peasant’s cottage because he judges the cottage and living conditions in Manchester to be the same. Even though he is a historian, but because he is also a member of Parliament, he knows that Manchester is great for the country’s economy and is therefore backing Manchester (Doc. 3). When Manchester was granted the royal charter in 1852, Wheelan and Company observed no part of England presents such remarkable and attractive features as Manchester. Analysis of this document provides us with two facts: first, Manchester, the Workshop of the World, indeed is attractive to a business as it has energetic exertions and enterprising spirit of the population…” and the second fact is that because it is business company, it is biased against the fact that Manchester is visually unattractive because all they care about is money and not the long gone beauty of the city (Doc. 9).

As seen in the above essay, Industrial Revolution was a big factor in the growth of Manchester that led to the increase of pollution/degraded living condition, bad working environment, and a repulsive appearance of the city. Various reactions took place due to these issues over the course of the 19th century. The problems with pollution continued to increase until the late 19th century, however the living conditions were improved. The working environment improved a little bit due to some reforms passed (ten hour act, increased wages, etc.).

Even though other problems were solved, the look of the city still remains almost the same. Manchester was probably one of the worst places to live in during the late 18th and early 19th century because of the Industrial Revolution. Even then, Manchester would become even more populated and would become the wealthiest city in the Great Britain. Britain’s economy would also boom due to the development of Manchester and the Industrial Revolution. This wealth fuelled the development of science and education in Manchester. 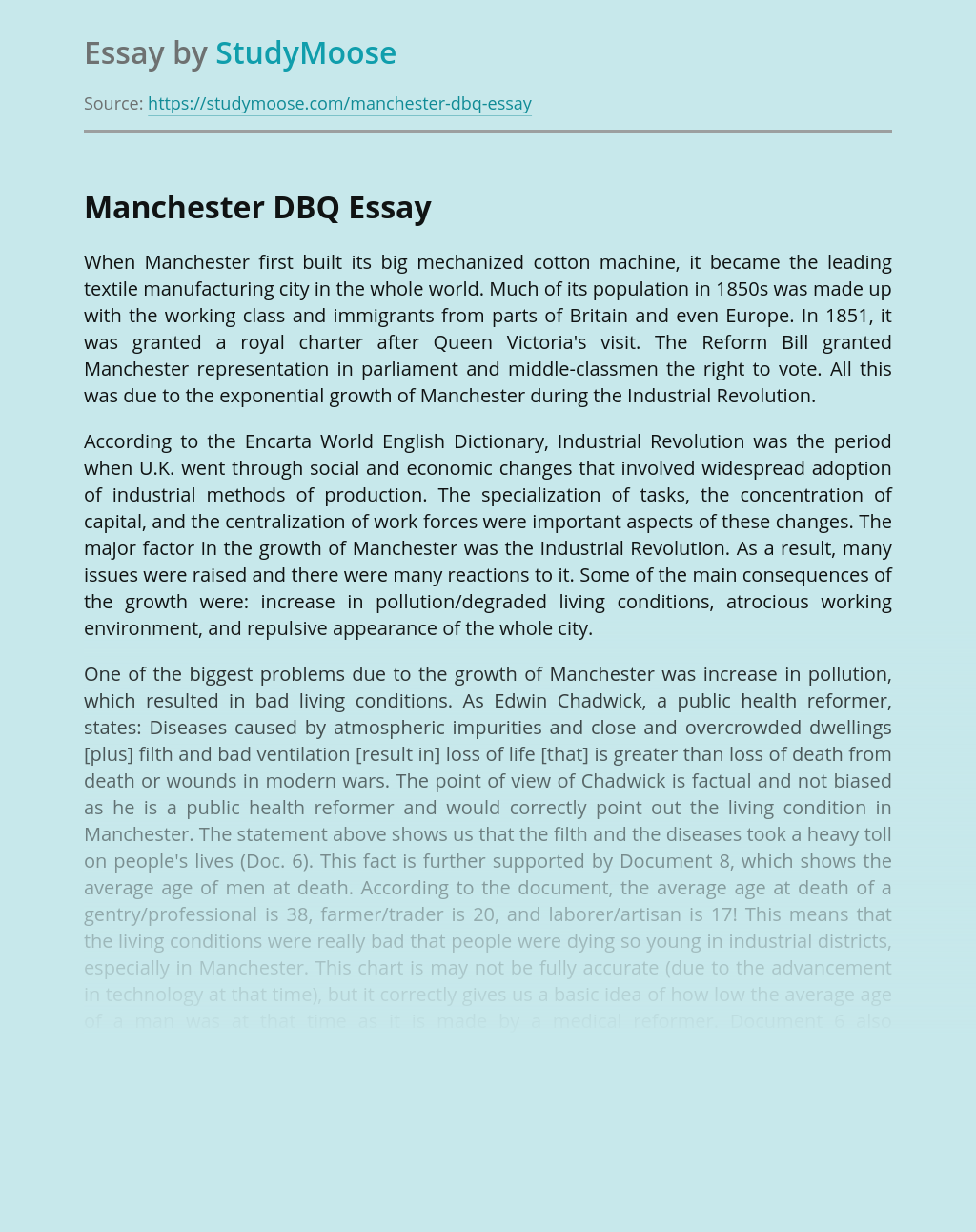