Industrial Revolution and The Farmers' Grievances

It is historian John D. Hicks’ thesis that the Southern and Western farmers suffered greatly in the new industrial system and blamed their suffering on the railroads, the trusts and low prices, the money-lenders and the bankers, and the money and banking system.

Western farmers blamed many of their troubles upon the railroads, which sent all western crops to the markets. The farmers had no choice but to use these roads. The railroads naturally exacted high rates. The local freight rates were particularly higher than the long distance rates.

Don’t waste time
Get a verified writer to help you with Industrial Revolution and The Farmers’ Grievances
Hire verified writer
$35.80 for a 2-page paper

Railroads, fortified by monopoly and supported by politics, were accused of controlling freight and fares at their own pleasure to the oppression of the farmer according to the principle, “take as much out of the pockets of the farmers as we can without taking it all”. It was believed that the practice of stock-watering had much to do with the high rates. The capitalization of railways was 3 to 4 times higher than the normal rate.

The farmers also believed that the railroads were stealing their priceless heritage of free lands.

Farmers saw that low prices led to their lack of prosperity and that trusts joined with railroads and politicians to pick people’s pockets. Prices dropped in certain sections of the country and later proved that farming was carried at an actual loss because it was over the cost of production. A western farmer had to sell his corn for eight to ten cents a bushel when the eastern broker demanded more than a dollar for it.

Trusts dominated the market by buying raw material at their own price, then selling the finished product at any price they wanted. Trusts furnished the farmer with clothing, with the machines he had to use, with the fuel he had to burn, with the materials for living.

Money-lenders and bankers increased the farmers’ burden with debts, high interest rates, and taxation. The widespread dependence upon the crop-lien system increased the burden of debt for farmers. They believed that the eastern capitalists were conspiring against them. Interest rates, already high, rose still higher. The western farmer was mortgaged literally for all he was worth and his fruits of labor. Taxation was inevitable for the farmers because of the land they couldn’t hide. Farmers represented one-fourth of the nation’s wealth but paid three-fourths of the taxes unlike the railroads who refused to pay taxes. The farmer was convinced that he was the helpless victim of unfair, unreasonable, ad discriminatory taxation. The local farmer was getting poorer and poorer every year.

Finally, the farmers believed that their chief grievance was against the system of money and banking. The value of the dollar was greater than it once had been. It would buy two bushels of grain where formerly it would but only one. The overproduction theory, low prices of goods and high interest rates added together with the commissions, debts and mortgages made the rising value of the dollar a serious matter for the farmers. By 1879, the greenback currency reached a full value with gold. This allowed the money-lenders and bankers to prosper while agriculture languished.

Industrial Revolution and The Farmers' Grievances. (2016, Jul 30). Retrieved from http://studymoose.com/industrial-revolution-and-the-farmers-grievances-essay 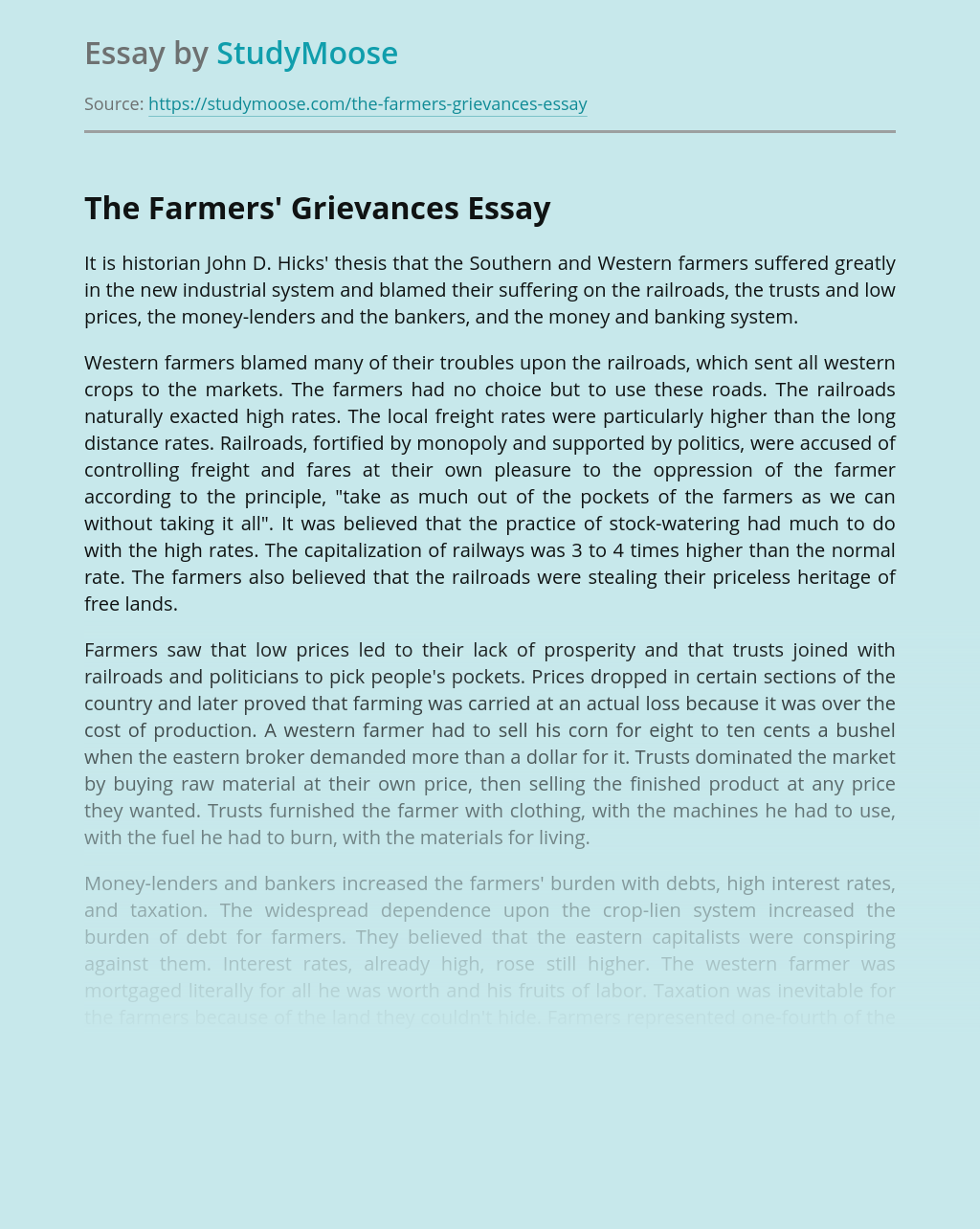 Don’t waste time
Get a verified writer to help you with Industrial Revolution and The Farmers’ Grievances
Hire verified writer
$35.80 for a 2-page paper
Stay Safe, Stay Original