Essay On The Industrial Revolution

In this assignment I will be explaining why, by the 19th century, Britain was known as the ‘workshop of the world’. This was clearly defined by the Great Exhibition of the Work of Industry opened in May 1851, held in the Crystal Palace in Hyde Park, London. This exhibition put on show to the world Britain’s wealth and inventiveness, displaying consumer goods and machinery from its great manufacturing cities. It showed that she was a forerunner of industry and going through, what we now call, the Industrial Revolution.

Don't use plagiarized sources. Get your custom essay on
“ Essay On The Industrial Revolution ”
Get custom paper
NEW! smart matching with writer

The Industrial Revolution was revolutionary not in its speed, but in its consequences. The century between 1750 and 1850 brought about the age of machines, in factories mass production and the assembly line, industrial towns and the industrial working class. Even though the greatest changes took place between 1750 and 1850 these dates cannot be used to tie down the beginning and the end of the industrial revolution, it was a slow process that took centuries not decades.

Why it happened in Britain is still debateable, but the country had ample resources of coal and iron, navigable rivers and canals, an increasing population as well as a growing empire overseas, which provided a captive market for British made products. Each of these reasons reacted with each other to encourage growth and make Britain a world leader in manufacturing. The rapid development of industry was aided by the growth of population in the mid 18th century.

In 1714 the population of England was thought to be about 5. 5 million, as reported by Gregory King, and had grown to about 10.

5 million by 1811, by which time an official census had begun. The reasons for this increase include the slow improvement in living conditions which lowered the death-rate among children, agricultural changes were producing more food, transport improved so a more varied diet was available, as well as allowing the movement of goods to any area of shortage. Better hygiene and housing meant better health all round so people were living longer.

All these meant the greater the population the greater the demand for more food and goods, which increased standards of living, which in turn increased the population. When Daniel Defoe went to Manchester in the early 18th century and called it ‘the greatest mere village in England’ it had some 9,000 inhabitants, by 1801 it had ten times that number. Towns grew as factories were built and attracted workers from the surrounding countryside, by higher wages as well as changes within the agriculture system. In 1700 the majority of people earned their living from the land.

Most spent all their working days on it, others only partly by agricultural and partly by some other job like weaving or carpentry. At this time the method of farming used was the open field method, which was a form of unenclosed farming. There were no hedges and the land was divided into three strips with each field lying fallow in turn. Any common land was used by the village as a whole to keep their animals. Any livestock they had could not be fed in the winter so were generally killed for Christmas so making stock breeding impossible.

This division of land into strips was wasteful of land and there were no effective drainage systems in place. This method had survived for centuries, as there had been little population growth; it was able to provide all the food necessary for the small villages. A rise in population meant increased demands for food so new methods of farming were needed. The open field system had many disadvantages and some individual landowners did introduce their own systems. Sir Richard Weston introduced some of the practices he had seen while in Holland.

He grew turnips, using them as winter-feed for cattle, and he sowed clover for hay and introduced irrigation onto his land. The new crops introduced by Weston became popular by the 18th century. Viscount Townsend advocated these ideas and grew clover and turnips in his fields and introduced the Norfolk Four Course Rotation method. This consisted of wheat; turnips, which cleaned the soil; oats or barley; and clover, which enriched the soil ready for the cereal crop that followed. Eventually this new rotation method was to spread over most of England.

Implement improvement also assisted in the increased production of food. Jethro Tull invented a drill for sowing seeds in rows at a controlled depth and the horse-hoe for keeping the ground clear of weeds. He was the forerunner of other developments in agricultural implements, particularly the harrow and the plough, both of which were, by 1820, made wholly of iron. Another branch of agriculture was developed called stockbreeding. The most famous leader in this field being Robert Bakewell. He specialised in pedigree stock, selected for a particular purpose.

He fed and housed his animals with care and he kept elaborate genealogical tables of this results. These changes though would have been in vain, if there had been no enclosure movement. Enclosure had begun gradually with a number of private acts of parliament between 1760 and 1815 being passed for individual landowners. In 1801 a General Enclosure Act was passed and by 1850 nearly all the agricultural land of England was enclosed. These enclosures worked to the advantage of the landowner and to the detriment of the villager who toiled on the land.

The villagers found themselves in receipt of legal bills, which they could not afford and, as likely as not, they could not produce evidence of any legal claim to their land so lost their squatters rights and were kicked out of their homes. Despite this until 1850 more workers were needed on the land than anywhere else. Agriculture was still the biggest single employer though the ratio was to decline by the mid 19th century. Less than 1:10 worked in agriculture in 1851 compared to 1:3 in 1811. Though migration to towns and factories had begun Britain was not yet based on a factory system.

The industries most affected in early stages of the industrial revolution were textiles, iron and steel, coal mining and pottery. The changes did not come about suddenly and were not new, but improvements on already existing methods. For example, power was being used already in the form of waterpower to drive mills for grinding corn, windmills also were in common usage and people were experimenting with steam in the 17th century. The changes also began at different rates within the different industries. Steam engines were being used to pump water out of mines before 1710 but not until 1780 were they employed to drive textile machines.

Also there were industries that hardly needed power at all, like pottery. Within the textile industry the succession of inventions provided increased output with less expenditure of human energy, transforming the making of cloth from a small-scale operation carried out by skilled workmen and their families at home, called the Domestic System, to large-scale production in factories where unskilled workers, many of them women and children, toiled as slaves to the machines. The main invention that provided a source of power far superior to anything seen before was the commercially effective steam engine invented by James Watt in 1769.

Steam was the driving force behind the industrial revolution and steam required coal. In 1700 much of the coal mining was surface mining and the production was approximately 2,5000,000 tons. Underground mining overtook surface mining and by 1800 output had increased to approximately 10,000,000 tons. This growth came about mainly due to other industries beginning to demand more coal as fuel. New pits were opened and deeper shafts were sunk. These shafts were prone to flooding and the major technical invention introduced by Thomas Newcomen in 1708 used steam power to pump the water out of the mines.

These engines came gradually into use all over the northeast coalfields so approximately 140 of them were in use by 1781. Britain’s coal production doubled between 1750 and 1800, and then grew by a factor of 20 by the end of the 19th century. Appropriately, at the entrance to the Great Exhibition of 1851 there stood a towering 24 tonne block of coal. The 18th century saw great changes in the iron industry. In the later part of this century there was a increased demand for iron goods. Before this time the main areas that produced iron were forested areas as wood (charcoal) was burned to melt the iron ore to produce the pig-iron.

As the forests declined the iron industry had to move to other woodland areas and when, in 1709, Abraham Darby discovered a way to use coal to melt the iron they finally located themselves onto the coalfields. Darby’s son improved on his process and was by 1750 making small quantities of bar-iron which could be used in forges. In 1788 the output of pig iron was 68,000 tons; by 1804 it had risen to 250,000. The introduction of the steam engine further improved the output. The first ironmaster to use steam power to blow the blast furnaces and to drive the hammer at a forge was John Wilkinson at his ironworks in Shropshire.

The need to transport coal cheaply and quickly then aided the development of the railways. James Watt made improvements to his steam engine and, with investment from his business partner Matthew Bolton, a new form of transport was developed. Matthew Bolton stated ‘I sell here, sir, what all the world desires to have – Power’. Soon railways covered the country and trains overtook canals and rivers as the main form of transport for goods and passengers. At the end of the 19th century there had been enormous growth in output. By 1870 the U. K. roduced 45% of the worlds cotton cloth and 50% of the worlds pig-iron but Britain’s manufacturing dominance was to be short-lived. It was only half a century after the Great Exhibition that U. S. A and Germany was challenging Britain’s production levels. New materials of various kinds and new sources of power began to be discovered and developed and to take up positions in the industrial picture so that Britain’s mainstay of coal, iron and steel, wool and cotton lost their central place world industry. The industrial revolution was still ongoing but no longer would Britain be the sole leader.

Essay On The Industrial Revolution. (2021, Jun 02). Retrieved from https://studymoose.com/the-industrial-revolution-new-essay 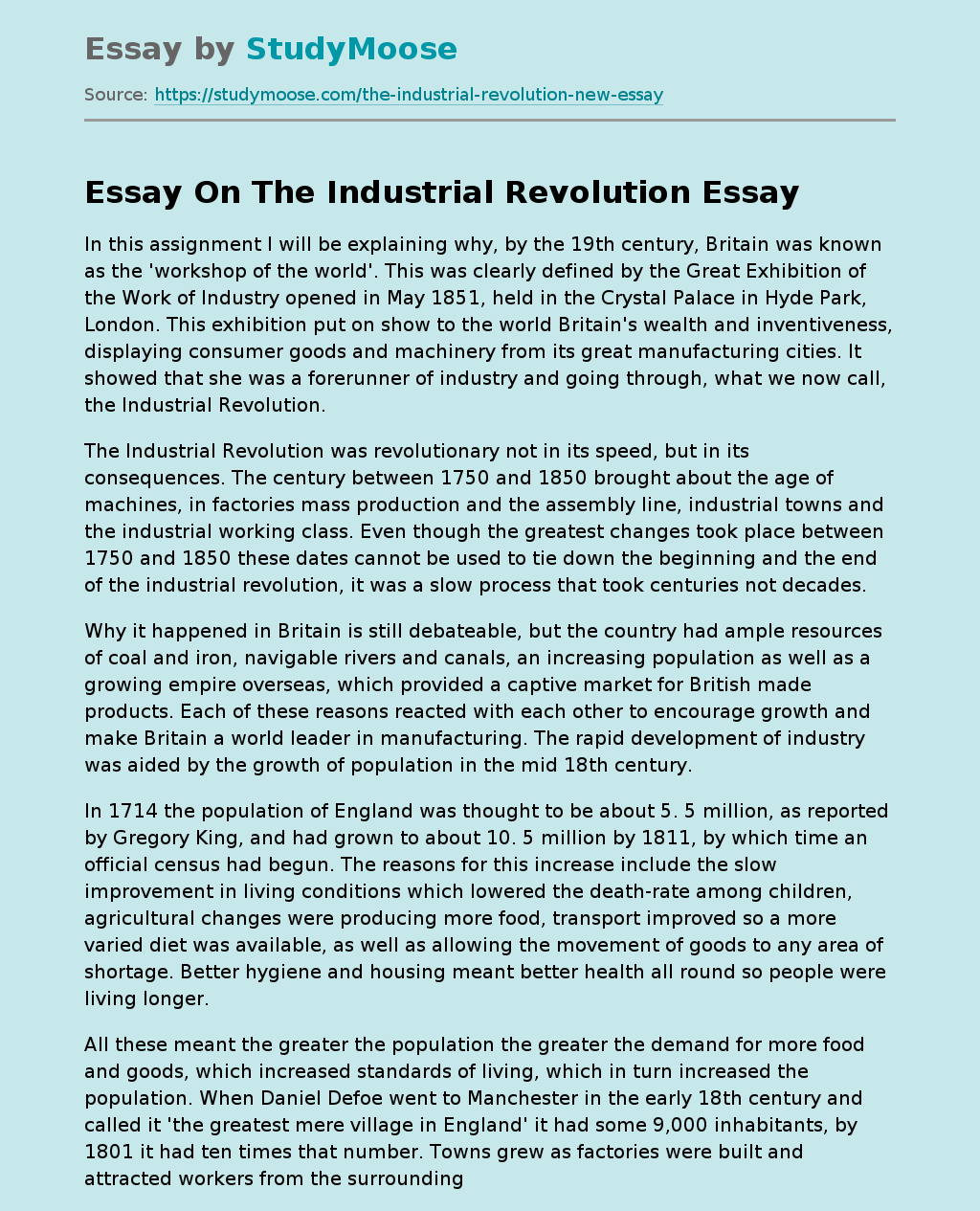