In 1773 parliament passed the tea act in which the British pay less for tax to ship places. This made the prices of tea lower from Britain. Since Boston’s tea would be more expensive nobody would buy it from them. The tea act was just another problem adding up between the colonists and britain. This made the colonists want to be independent from Britain. The colonists decided to rebel and dumb three hundred and forty two chests of tea into the Boston Harbor.

Don't use plagiarized sources. Get your custom essay on
“ British Perspective on the Boston Tea Party ”
Get custom paper
NEW! smart matching with writer

In 1763 the British put a line along the Appalachian Mountains so the the colonists could not move into the Ohio River Valley. This was called the Proclamation Line. The British prohibited the colonists from their land to protect them from the Indians.

The fact that the British were forbidding the colonists from passing the Appalachian Mountains made them very mad. They looked at it as the British not allowing them to settle into more land. The colonists were not allowed to buy and live on the land that they fought and won a war for. It was there land and they were being deprived their right to their own property.

The way the colonists saw the Sugar Act was an act of selfishness. The British taxed the tea the colonists used to buy because it was cheaper. The British had no right to tax the colonists. They had no say in how much the tax should be or what it was on. They used sugar everyday it was completely unfair.

In 1765 the British made the Quartering Act. It required for british troops to have to live in the colonists homes when they were stationed in the colonies. The British thought it was only fair for the colonists to take care of their soldiers. Many of those soldeirs fought in the war against the French and Indians. It would cost too much for Britain to pay to build housing for the soldiers.

In 1767 a powerful British man named Charles Townshend had the idea of putting taxes on glass, lead, paints, paper, and other everyday products of the colonists. The reason for taxing these products was so Britain could get more money for their government. They also did it for more power over everyone.

The colonists did not like the Townshend acts. It was just a way for Britain to take more money. The colonist rebelled just like they did with the quartering and sugar act. They boycotted British products. The trade between them dropped by fifty percent as a result in the boycott. They claimed it was unconstitutional because the colonies did not have any say in the Parliament. The debate wether or not the colonies had represntation in parliament was not settled until the revolution.

This made the Colonists look at the Tea Act as another taxation without representation situation. It meant they could not buy tea from anyone else and so their tea would lose its business. They were also angry because it went against the english right of only being taxed by the elected representatives not the parliament.

The Sons of Liberty were a group of patriots who were dedicated to getting independence for the colonies. They Sons of Liberty Believed in being free. They were a secret group that wanted to fight for America. The group formed when the British Empire became on of the most feared powers in the world. Samuel Adams formed the Sons of Liberty.

The British saw the Boston Tea Party as an act of terrorism. They saw it as a group of drunk and crazy people dumping their tea into the boston Harbor with out paying for it. They completely rebelled against the government and wasted a lot of money after all that the British have done for them.

On December 16, 1773 the Sons of Liberty boarded three British ships. They dressed up as Mohawk Indians in order to be able to access the ships. They also had to arm themselves with hatches and axes to make their disguises more believable. They opened and dumped every single chest into the Boston Harbor. This was called the Boston Tea Party. When it was over there were three hundred and forty two wooden chests floating in the water. Many other people boycotted the tea in the same way later on. The colonists did this to show independence. 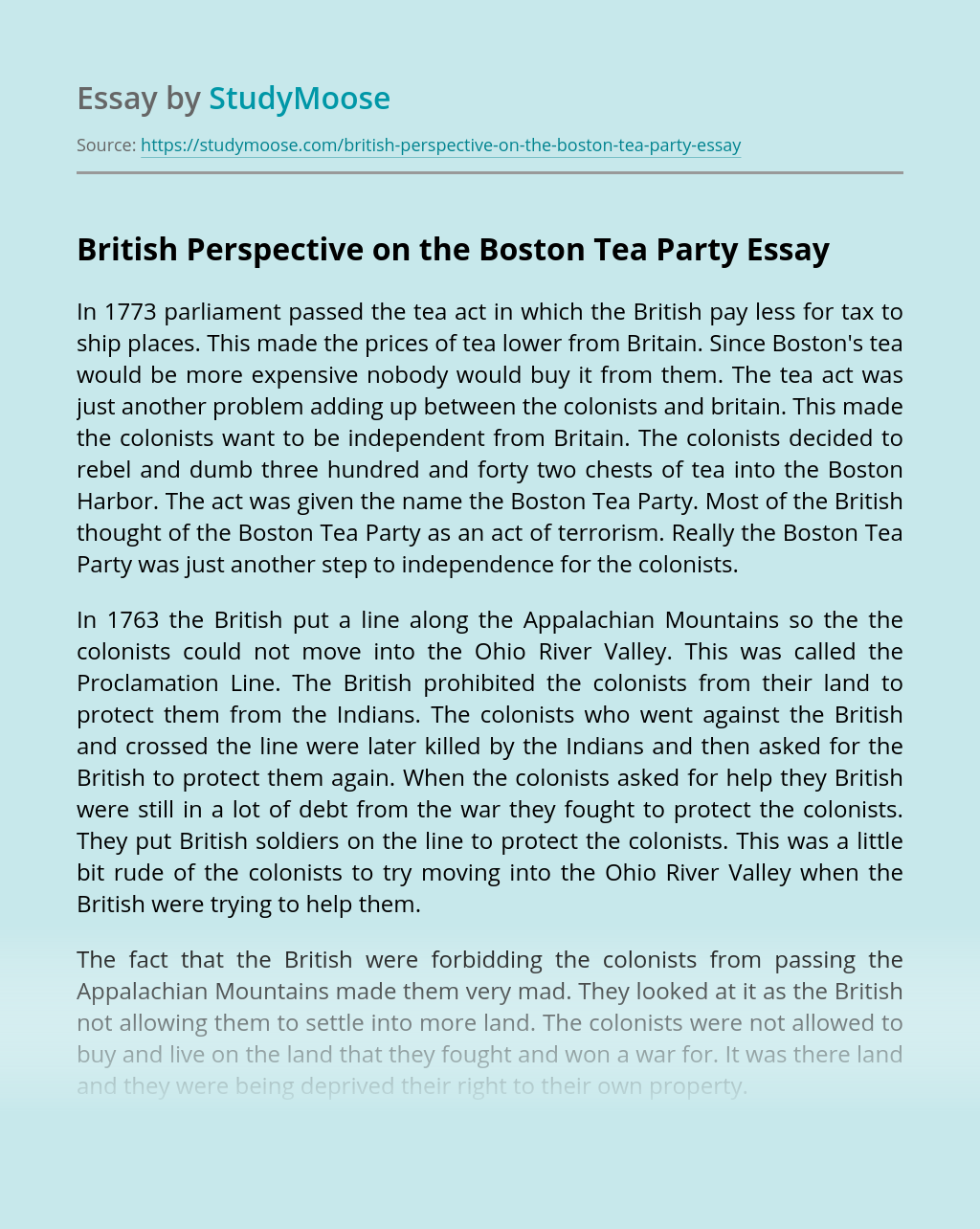