Poems by Seamus Heaney "Death of a Naturalist" and "The Barn"

Both poems display very rich description from the start and continue this full description throughout the poem giving you a very clear image of the sights, sounds and smells described. The very first lines of each poem show this rich flavour and very much give you the idea that the poems are about nature. The poems are about forces of nature and they both build the effect of these forces using description. Death of a Naturalist uses the description to give the feeling that the author is control of nature that is why when it comes to the last verse it is so shocking to the author because he realises he is not in control anymore and cannot control the forces of nature.

Don't use plagiarized sources. Get your custom essay on
“ Poems by Seamus Heaney “Death of a Naturalist” and “The Barn” ”
Get custom paper
NEW! smart matching with writer

The Barn uses the description to give you the feeling you get when you are in the barn. It gives you the feeling that everything is still, dead and cold this gives it an eerie feeling and this feeling is expressed in the last verse not as still, dead or cold but very much alive.

Both poems are reminiscing about childhood experiences with the true forces of nature. You can tell that they are childhood experiences because of the language used. In Death of a Naturalist the things that tell you that it is a child speaking through Seamus Heaney are the things that this child does. The child collects ‘jampotfuls’ of spawn and puts them on window-sills at home and shelves at school. Also the language used tells us that it is told through the words of a child.

Words like daddy and mammy are examples of the child-like language used in Death of a Naturalist. In The Barn the things that tell you that it is a childhood experience is the description and the actions.

The description of the floor ‘mouse-grey’ is typical of a simple childish description. The action that tells us that it is a childhood experience is the way the child lays on the floor face down, although an adult may have been scared in the barn I think that an adult may not have laid face down on the floor so therefore it must have been a child. Even though both these poems are childhood experiences there are more signs of this in Death of a Naturalist than in The Barn because anybody could have been scared of being in a barn alone but I think that every adult knows that when tadpoles are fully developed that they turn into horrible, ugly, slimy creatures- frogs.

Both poems show how people feel in control. In Death of a Naturalist the young boy felt in control of the spawn until the day when he saw the frogs and in The Barn he felt in control because the farm implements were not real the only thing that he wasn’t in control of was his mind which led him to believe that the farm implements were moving. I think of the two poems the more realistic is Death of a Naturalist because of the actions of the young boy and the way the frogs are described in the last verse. The thing that makes The Barn seem more surreal is the last sentence ‘the two-lugged sacks moved in like great blind rats’ because sacks do not move.

The Barn seems to depict the tone of the whole poem right from the start. It has a vague threatening feel to it and this is theme is continued throughout the whole poem even at the end when the two sacks seemed threatening because they seemed to be moving. Death of a Naturalist however does not have a particular tone all the way through. At the beginning of this poem the description is of things that are revolting but because the child loved nature so much they are described as likeable aspects of nature and the things that are not revolting are just described as nature. The last verse does not continue this theme and things that are disgusting are described as exactly that and even exaggerated.

I think both these poems are similar but within their similarities they have many subtle differences.

Poems by Seamus Heaney "Death of a Naturalist" and "The Barn". (2016, Jun 23). Retrieved from http://studymoose.com/poems-by-seamus-heaney-death-of-a-naturalist-and-the-barn-essay 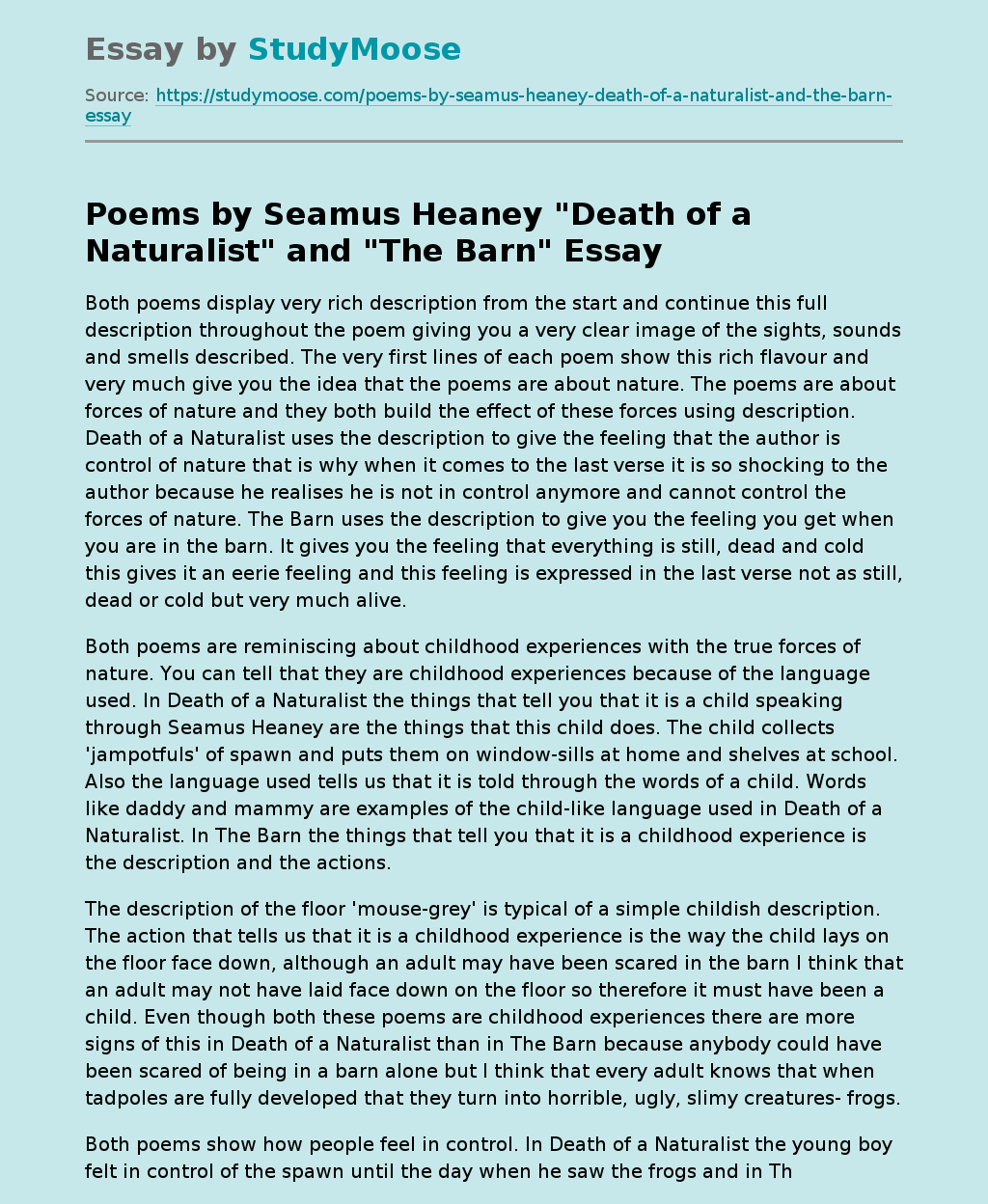