With close reference to at least two poems, discuss Seamus Heaney's presentation of his childhood in Ireland

With close reference to at least two poems, discuss Seamus Heaney’s presentation of his childhood in Ireland.

Death of a Naturalist is about where Heaney played as a child and how he reflects back on it as an adult. Early purges has a similar theme except it is set on a farmyard and is more domestic. Both poems tell a tale of the death of an aspect of Heaney’s childhood.

Death of A Naturalist is set in an area called the flax-dam.

Don't use plagiarized sources. Get your custom essay on
“ With close reference to at least two poems, discuss Seamus Heaney’s presentation of his childhood in Ireland ”
Get custom paper
NEW! smart matching with writer

This is an area surrounding a pond where amongst other plants; cotton plants (flax) grew. Heaney expresses his feelings and thoughts about the Flax-dam with two different voices. The voice of Heaney as an adult is shown when he uses more sophisticated language and polysyllabic words,

These are two examples of words, which would be so mature for a child to use. As Heaney comes into using the second voice he simplifies his language to that of a child.

“But best of all was the warm thick slobber of frogs spawn that grew like clotted water.”

This simile is very strong and describes the way that a child may see frogs spawn and so shows that Heaney is looking back through the eyes of a child.

Heaney describes the Flax-dam as,

“festered” and “heavy-headed” this creates an image of dirt and danger, in his childhood. He also describes the sun as,

This is a dramatic use of pathetic fallacy, which adds an unusual twist to the poem because the sun is usually associated with beauty and life bringing issues, but in Heaney’s poem the sun is causing death and decay.

This creates a sense of uncertainty. Although the flax-dam is described in this way, in the first stanza there is still a sense of innocence and unawareness.

Both poems have an irregular rhythm, which also creates a sense of uncertainty and unpredictability. Heaney used this unpredictability because at the time (and in parts still is) Ireland was a very dangerous place because of the war that was taking place. Heaney portrays this war image into his poem. The two poems are similar in the way that they both have imagery that suggest life in Ireland was closely linked to war and was at times very difficult. Heaney’s use of very strong war imagery in the second stanza of ‘Death of a Naturalist’ shows us this,

“I ducked through hedges”

This gives us an image of a soldier running through the bushes trying not to be seen. Words such as,

are also used to give the same effect of war. Heaney uses the word rank as a pun. It has two different meanings, smelly and rotten or a rank in the army. Both are images that Heaney includes in his poem frequently. This pun shows us to different aspects if the world Heaney grew up in. They both are linked with danger, the unclean area, which he grew up in, and the war that surrounded his everyday life. The ninth line in the last stanza is an example of a simile to create a strong war image,

“…the daddy frog…” and “…the mammy frog…” (how are the frog and the nightigale symbolic compare read at GetMyEssay.com)

This is a sort of metaphor for the way adults covered up the facts about the war.

The lack of rhyme in ‘Death of a Naturalist’ suggests a sense of unpredictability, but also a sound like ordinary speech, which is uncomfortable in poetry. Heaney uses this ordinary speech because he is describing his everyday life and what was ordinary for him as a child.

The opening line of the second stanza, describes the day as,

This presents an image of hell, which is unusual to be use for describing someone’s childhood.

Stress on the word spotted creates a vivid image of decay and disease, which relates back to the flax-dam being dangerous and unclean.

“I was six when I first saw kittens drown.”

Heaney wants to shock the reader and continuously does it throughout the poem. What is more disturbing and shocking is the fact that it is no accident that the kittens are drowning. This is an example of emotion and even tear jerking images.

This line may also come as surprise to the reader because kittens are usually described to be sweet and beautiful. This direct speech creates a sense of immediacy, which makes the poem seem more realistic. An echo of Direct speech is used in ‘Death of a Naturalist’ which also gives a sense of immediacy and makes the reader feel although they are actually on the scene of the poem.

“…the daddy frog was called a bullfrog and how he croaked and how the mammy frog laid hundreds of little eggs and this was frogspawn.”

Heaney brings aspects of domestic Ireland into his poems to show that these poems are personal to him and his own childhood life. His use of words such as,

From ‘The Early Purges’ and

“…on window sills at home…”

From ‘Death of a Naturalist’

Give a subtle but firm image of his home life.

Heaney uses alliteration in his poems when he repeatedly uses a ‘s’ sound. This makes a hissing noise when read aloud which gives out a sense of discussed. He uses this alliteration of the ‘s’ sound in ‘Death of a Naturalist’

“…sweltered in the punishing sun…”

and in ‘The Early Purges mainly in the second stanza,

“Soft paws scraping like mad. But their ting din was soon soused. They were slung on the snout…”

The way the water pump is described in the second stanza is personification of a pig and shows the reader an image of a farmyard because it is associated with a farm animal.

The first line in the third stanza is very powerful because of the use of direct speech. This direct speech makes it seem although Dan is actually speaking to the reader.

“‘Sure isn’t is better for them now?’ said Dan”

And in ‘The Early Purges’ there is the voice of Dan Taggart who; in a way was also a teacher to Heaney because he was teaching him the ways of people in rural Ireland. The two poems are similar in this way because Heaney was learning something from someone older than he was. They are different in a way too because in ‘The Early Purges’ Heaney was taught by Dan Taggart who wasn’t afraid to cover up any gory details, but in ‘Death of a Naturalist’ Heaney’s teacher talks down to him and tries to sugar coat details about frogs and their spawn.

In he third stanza the kittens were dead and this reflected in the rhythm of this stanza. It is slow and steady in comparison with the former two, this links with the way the kittens bobbed, dead in the bucket.

“…like wet gloves they bobbed and shone till he sluiced them out on the dunghill, glossy, dead.”

The last three words in this stanza are greatly stressed because of the use of commas without the word ‘and’. This breaks the words up and therefore making the rhythm very slow, almost like the beat of a funeral drum.

Heaney describes himself to have been,

“…sadly hung round the yard.”

This could be seen as a metaphor for the way kittens were slung onto the water pump and then thrown out onto the dunghill.

Onomatopoeia is used in the last line of the forth stanza, which adds drama and a sense of immediacy.

The first sentence in the fifth stanza creates a sense of confusion and tension because the reader is made to think how anyone could ever forget kittens being murdered in such a horrific way, also because this sentence is quite short, no explanation is given and short sentences create tension. Reassurance of what is Heaney is feeling in his childhood is soon brought back into the poem when, in the second sentence of this stanza when Heaney describes other cruel actions Dan Taggart performed against animals. This sentence is quite long so the tension from the sentence before is relieved, but it is still very dramatic because of Heaney’s use of many commas and strong verbs.

Heaney is then describing himself in the sixth stanza to be,

This means that after all he has witnessed he is still living so everything he first thought of so be wrong and cruel must have been just false sentiments because he was perfectly fine and overcome his bad experiences. This is shown in the last two lines of the sixth stanza and the whole of the seventh,

“…And now when shrill pups are prodded to drown, I just shrug, ‘Bloody pups’. It makes sense:

‘Prevention of cruelty’ talk cuts ice in the town where they consider death unnatural, but on well run-farms pest have to be kept down”

This is considered a fact in rural Ireland. The last stanza is quite patronising to urban people because it is obvious that death is a natural occurrence.

With close reference to at least two poems, discuss Seamus Heaney's presentation of his childhood in Ireland. (2020, Jun 01). Retrieved from http://studymoose.com/close-reference-least-two-poems-discuss-seamus-heaneys-presentation-childhood-ireland-new-essay 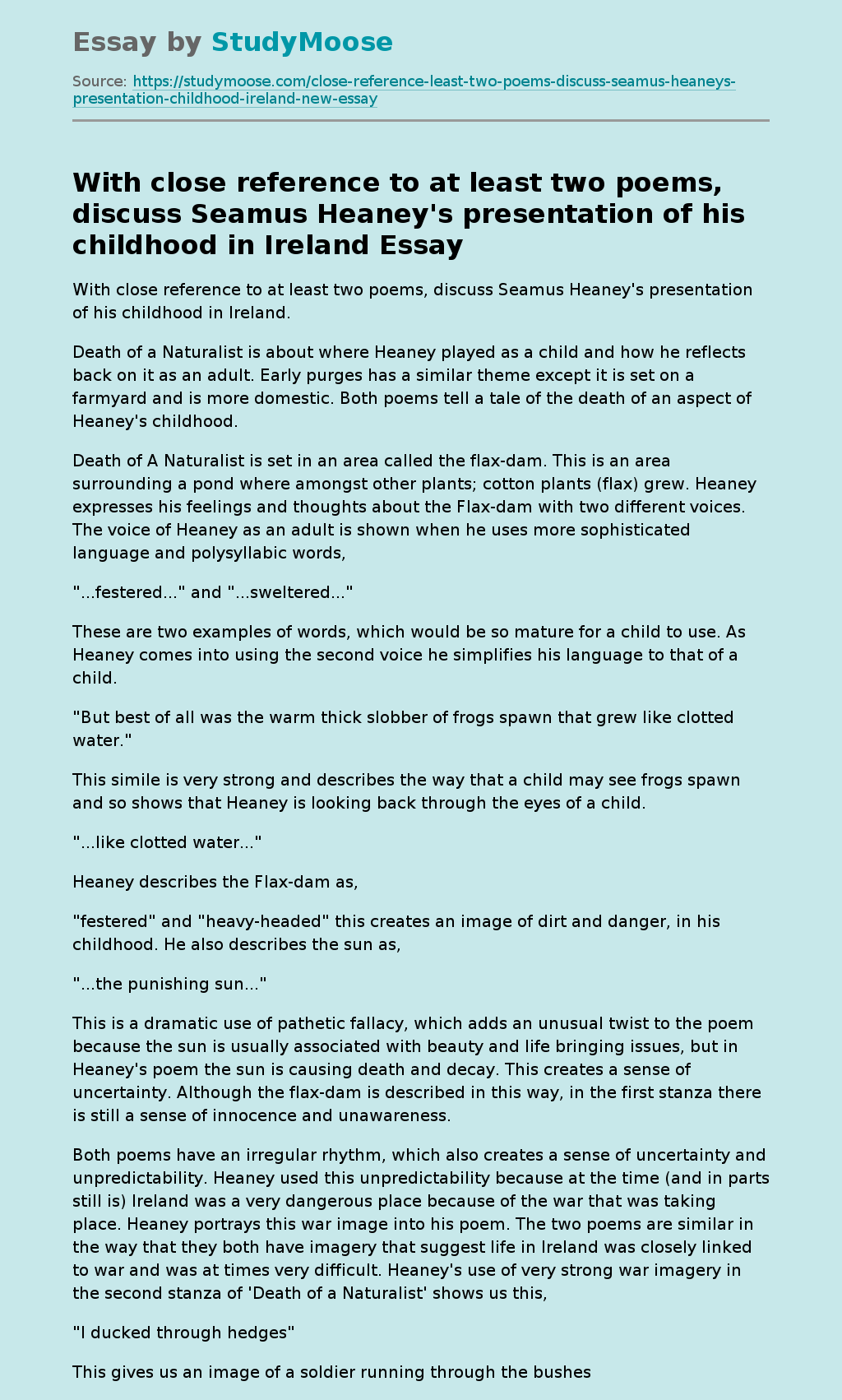