The poem “The Turnip-Snedder” by Seamus Heaney is about an archaic machine that was used in traditional farming, to cut the heads off turnips. The turnip-snedder is personified and portrayed in multiple ways. It is personified in a monstrous way but also in a very god like and powerful manner. The turnip snedder is also used to reflect the idea how some people refuse change even though it is inevitable. The poet’s attitude is nostalgic with a sinister undertone of violence and terrorism.

Don't use plagiarized sources. Get your custom essay on
“ Seamus Heaney – The turnip snedder ”
Get custom paper
NEW! smart matching with writer

The poem is written in couplets and contains two sentences. The couplets mimic the sound and feel of turning the turnip-snedder, making it seem like a cycle. The first sentence introduces the turnip snedder as an archaic machine that refuses to adapt to change, with a slight undertone of violence. In the second sentence, the snedder is personified and portrayed as God like with a sinister tone.

The overall rhythm of the poem is irregular and this reflects the struggle of manual labor and tough work, creating a sense of disharmony.

The irregular rhythm reflects how things always change and that change is inevitable. The title “The Turnip-Snedder” has a very ominous tone but it also sounds powerful, personifying the turnip-snedder. The word “sned” is derived from old English meaning “to cut” and “to kill by cutting”. By using old English, Heaney extends on the idea that the turnip-snedder is archaic and no longer used. It also hints at the violence that the turnip snedder is capable of and links to the victims of terrorism and massacre on a metaphorical level.

Heaney dedicated this poem to Hughie O’ Donoghue as he is the photographer of the picture that inspired Heaney to write this poem.

This shows how Heaney is always trying to find inspiration in traditional Irish things as a process of being able to relate and find his identity. In the opening lines, Heaney introduces the setting and by using the word “age” it creates a sense of a period of time that has already passed or an era that is now over. This reflects back on the idea that the turnip snedder is archaic and belongs to a time that is over hence it is no longer being used. Also, by using the word “age”, it makes it seem distant, slightly hinting at an undertone of nostalgia. To extend on the setting and the time that Heaney is describing he uses “bare hands” which creates imagery in the reader’s mind of a very manual, tough and uncompromising life and how things were before modern technology.

After setting the scene, Heaney goes on to describing the turnip snedder. In the first sentence it is portrayed as something that refuses to change. This is evident when Heaney says “cast iron” as when is something is cast iron, it means that is stiff and unbending. That is a metaphor for how traditional farming and the turnip snedder are refusing to change or adapt. This idea is emphasized even more when the term “clamp on” is used as that also has a connotation of something that refuses to budge. The undertone of the violence is hinted by the alliteration of the “meat-mincer” as it creates gruesome imagery of the turnip snedder being a killing machine. The repetition of “m” has a cruel tone to it as it reflects the repetitive murders and acts of terrorism result in the victims becoming nothing more than numbers and statistics.

Also, the fact that the machine “clamps” on “meat-mincer” makes it seem like the turnip snedder is a predator and it “clamps” on to the prey, making it seem very powerful and violent. The personification is then extended in the third couplet when it is stated that “it dug its heels”. This makes the turnip snedder seem animalistic, alive and even more powerful. This again intensifies the image of it being a predator and ready to prey on its victims. Also, the fact that it “dug its heels in wooden tubs” shows how it has taken a stand, and is again refusing to budge or change. But the significance here is that it chose to stand “in wooden tubs”, this refers to how it has chosen to stand with other obsolete and pre-modern things that are no longer used almost as if it is trying to secure itself and its importance by staying with other pre-modern things.

Even though both the turnip snedder and the wooden tubs are archaic and outdated if we were to compare them, the turnip snedder would be considered a more complicated piece of equipment, therefore slightly superior to a wooden tub which is very basic and simple. This portrays the turnip snedder as power hungry as it chose to stay in a place to where it is still seen as more important and superior to what is around it. Despite its attempts to stay important the reader can see that it is neglected and no longer used when Heaney states “troughs of slope”. This shows how all these traditional farming methods are nothing more but left overs as they are disregarded and no longer needed, but still refuse to move. Again, there is an undertone of violence as this creates imagery of bodies being scattered and left, foreshadowing the terrorism that is going to be mentioned in the second sentence and in poems later on in the anthology.

Heaney uses contrast in the fourth couplet, such as “cold” and “heat”, and this contrast is used to present modern vs. pre-modern, showing how the turnip snedder and other traditional farming methods are constantly in battle with the modern technology. Contrast is used again with “summer” and “winter”. This reflects change and shows how everything is changing such as the seasons but the machinery still refuses to change and adapt even though change is clearly inevitable. “Winter” is not only used in contrast, but it is also repeated in the couplet after it. This repetition reflects the idea of the traditional farming era to be over as winter is the season everything dies, making it a metaphor for how the winter has come and the era of pre-modern technology is over. Not only is the turnip snedder portrayed as something refusing to change, but it also seems like it is attempting to fight change and sees it as an enemy.

The second sentence in the poem starts off with a quotation “This is the way God sees life”, this represents tyrants and their ignorant ideals and this is how they justify their violent and cruel acts. It is also a bigger metaphor for the life cycle of humans and “from seedling braid to snedder” shows how change is inevitable but again also shows the life cycle of humans as “seedling” creates an image of someone young that has potential to grow but they do not get a chance as they instantly go to the “snedder”, meaning they are killed due to acts of violence and terrorism. This also shows how the turnip snedder thinks it’s responsible and is powerful enough to control the human life cycle, and that is also how tyrants think. There is strong imagery in the eighth couplet when Heaney says “turnip heads were let fall
and fed”.

The turnip snedder is a metaphor for the guillotine and how it took away many lives and “turnip heads” creates an image of human heads and “let fall” shows how careless they were and how normal it was. The turnip snedder is personified again by using the word “fed” and portrays as if it was a monster that not only does it feed off this violence but also enjoys it too as “juiced up” makes it seem like it is excited to kill and that it wants more victims. This makes the snedder sound blood thirsty and that is also how most military regimes are. Another quotation is used “This is the turnip cycle” and it sounds very certain but ominous. It reflects the cycle of life, the inevitably of change and how the turnip snedder is responsible for the human cycle and how powerful it is, and this again is a bigger metaphor for tyrants and military regimes as they control everything and are very powerful.

Yet violent. The final couplet has a very strong sense of imagery and cruelty due to the emotive language, such as “dropped”. This creates an image of the heads falling after they’ve been cut off but the fact that they’ve been described as “dropped” shows how carelessly they fall and has a sense of lack of control. It is also a metaphor for how the traditional farming methods and machinery are “dropped” as no one cares or uses them anymore. Also the word “raw” has a connotation of something that is underdeveloped, and the machine itself is underdeveloped and pre-modern. It could also describe the victims as it makes them sound very exposed and how they are killed before their time hinting they are not ready for this nor deserve it.

The repetition of “bucketful” creates a sense of mass murder as there are never ending buckets of dead people, linking back to the idea of terrorism. Also the use of the word “glistering” reflects the idea that the poem is about archaic and obsolete things that are no longer used, as it is an old English word that is not used anymore. In conclusion, Heaney portrays the turnip snedder as a torture device and also as something that refuses to change as the turnip snedder is personified strongly throughout the poem. The themes like terrorism and violence are present in the first poem in the anthology, giving the reader an idea of what one of the common themes are in this anthology. 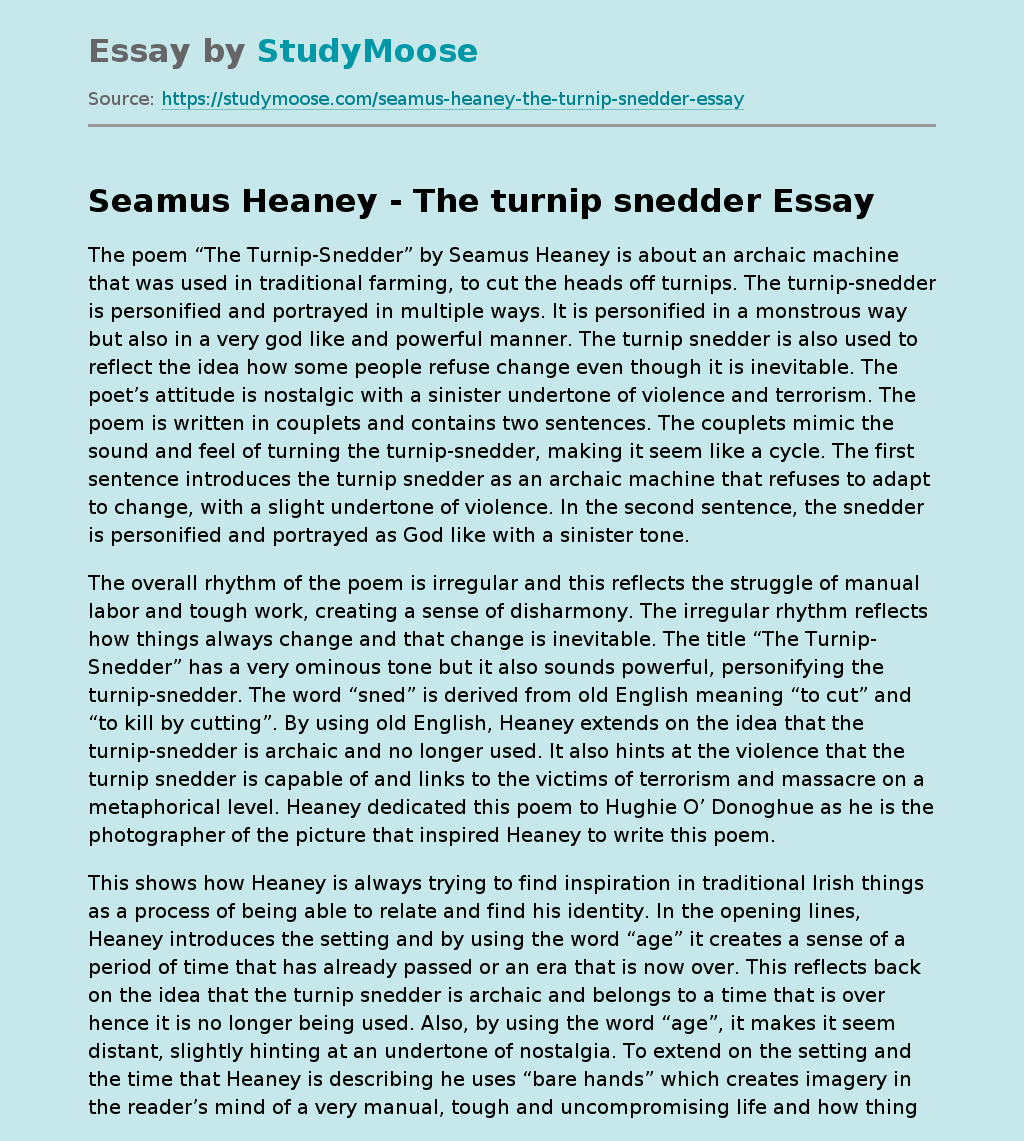