Analysis of the Forge by Seamus Heaney

The title of the poem means a blacksmith.The line presents a contrast between the dark, the older time period of his profession, and the outside, modern world, in which his profession is less visible and honored.The poem uses the image of a blacksmith and the nature of the profession. “Old axles and iron hoops” show that he has been doing this for years.The previous line describes how the older tools are outside, outdated and now unusable they are.

Don't use plagiarized sources. Get your custom essay on
“ Analysis of the Forge by Seamus Heaney ”
Get custom paper
NEW! smart matching with writer

In this line however it talks about how although the old and once trusted tools are no longer in use, work is continuing on in the blacksmith’s shop. Their work does not stop just as the times change and new equipment is developed.“The unpredictable fantail of sparks” describes how long the black smith has been working. Being a blacksmith, shifting metal has certain qualities. Such as when the sparks fly.He notices the sparks can symbolize how the sparks seem never ending there are too many of them.

This could also be shown as his life in the blacksmith profession, Neverending and unpredictable.This line describes how when something new comes into the blacksmith shop it doesn’t fit in well.

The change is not adapted to the shop.This line shows the image of putting a hot horseshoe in cold water, the steam rising up as the cool water hits the heated steel.Describing the ring of the anvil the hiss of the water. It uses sound to tell the reader in the environment and action he is in.

The fact that the anvil has to be in the “centre” shows the importance that the blacksmith puts on the anvil. since he later refers to it as an “altar” it relates to the fact that he treats it religiously, its very important. The altar is place in the center so that it can be the center of everything in order to honor the item and give it worship.It is also described with the word “unicorn” gives the anvil a fantastical and mystical quality which also shows that the blacksmith relies on it very much. The anvil is like dark age of the man. It’s foreign to the rest of society.Also he is talking about the anvil and how it is a simple tool that is square with two horns on each end.

There is nothing fancy or detailed, reflecting the past and how tools and other things were made for one purpose only and that was to get the job done nothing else. Many tools have numerous detailed parts to them. Yet here is this blacksmith who is stuck in his ways and refuses to move forward with the rest of the world and stick to his old ways. However the blacksmith himself views his work, and calls the anvil an “altar” which supports how much he honours his work. Where he “expands himself in shape and music” shows how more focused on his anvil.The blacksmith sees his work as something that is highly valuable and you should people should respect him for that. Furthermore the profession of a Blacksmith is not nice and sweet . It is not about looking good while being at work, rather it is only about making a useful object for someone else.The “Sometimes” of this line shows that the job of a blacksmith is not in a suit and tie kind of job.

There is no profession and no required uniform. He has been doing this job for such a long time, that he has lost the urge to look or dress a certain way. All of his customers have known him for a long time and know what all he does, so he has become comfortable with who he is and does not worry if there are “hairs in his nose. ”Leaning” means he is maybe tired of doing his job and the effort he puts in is fading away. In this line the speaker shows his enjoyment of his work but as he is getting older doesn’t care as much. His references the “clatter of hoofs where traffic is flashing in rows” referring to a time when the street were his place of business and was not filled with cars, but with horses.This can be further informed on line five “Or the hiss when a new shoe toughens in water” This line also shows the speakers change and how the modern world finds him remarkably old. The blacksmith has seen his job as his main routine in his life working with the “bellows” and beating “real iron”.The poem ends in this image to show that a persons way of life is natural.

Analysis of the Forge by Seamus Heaney. (2016, Jun 12). Retrieved from https://studymoose.com/analysis-of-the-forge-by-seamus-heaney-essay 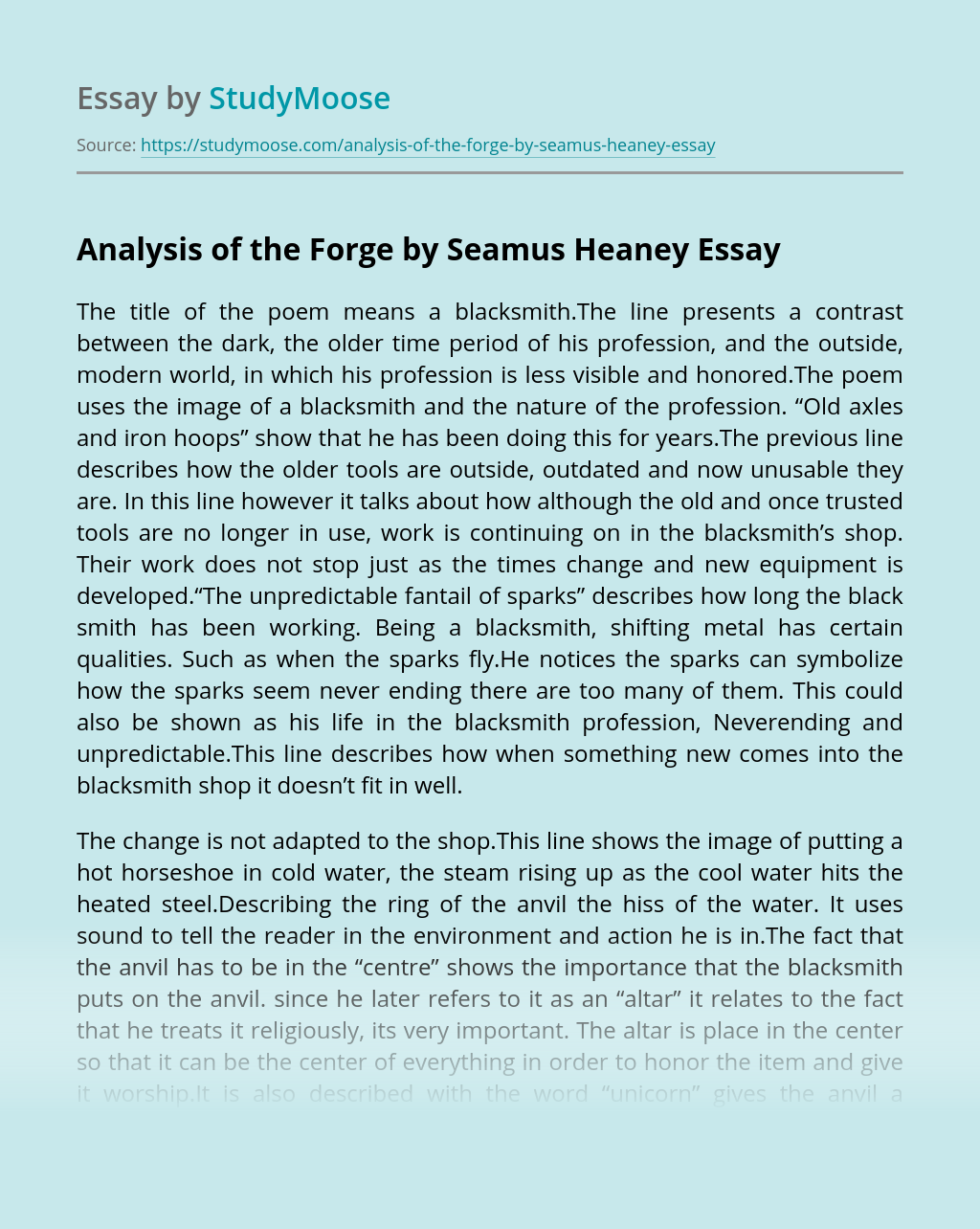