Seamus Heaney employs a great number of poetic devices in order to explore the theme of women in his poem “The Wife’s Tale”. The free-verse piece features in Heaney’s 1969 collection “A Door into the Dark”, is non-rhyming, and is divided into four stanzas of seven, twelve, seven and nine lines respectively. The varying length of verse adds a quirky, idiosyncratic feel and helps to create different levels of focus on the contents of each section. Dealing with Heaney’s perspective on the role of a woman in a rural setting, it is likely to have been based on his mother (the woman he would have been closest to and seen most of whilst growing up, giving him credible scope for writing on this topic) and her experiences in this context.

Don't use plagiarized sources. Get your custom essay on
“ Seamus Heaney’s the wifes tale ”
Get custom paper
NEW! smart matching with writer

The poem emanates feeling of routine, that this is not based on an isolated event but of many times over years of living on the family farm in Derry.

The voice of the poem represents not only Heaney’s mother, but all quintessentially rural women.

The roles of women during the time were just the same as they were before and during World War II – typically to stay at home, do the household chores and take care of the family – indeed not much had changed. Towards the mid-sixties, women started to move out and away from the home, taking up jobs and doing the same things that men were doing. Many took up careers to help support the family, either because they wanted to earn and provide independently or because they had to.

This poem depicts a woman who fits the more traditional role of the “rural wife” at a time when women were starting to see other options. The rhythm of the poem enacts a descent through the stanzas and the metaphorical anecdote which they depict, as Heaney immortalises the rural tradition of a woman’s role and allows her to voice the tale.

The title of the poem, typically of Heaney’s style, is relatively simple, allowing the reader to take it literally or to search for an underlying metaphor – part of the poetic beauty of Heaney’s pieces. It is also a play on words to the typical saying “an old wife’s tale” , which is associated with a lie or a made-up tale – perhaps sarcastically dismissing the story of the woman in question just as many people would have dismissed her as a second-class citizen at the time. The first stanza boasts an almost ominous tone as the woman has placed the sustenance out for the men and waits in anticipation for them to approach. The opening line “I had spread it all on linen cloth” could refer directly to the food, or could perhaps be a metaphor for someone who has given “it all” – putting all her efforts in to serve (who we can infer to be) her husband, and his workmates.

In this verse and throughout the poem, a sense of isolation is felt by the narrator; born out of not truly understanding her surroundings and the work being carried out by the men. This effect is created by use of metaphors and descriptions of the setting that do not quite “fit” – they are almost childlike in manner as she tries to liken this unfamiliar environment to something she is more used to. The sense of unfamiliarity is reiterated by personification of the harvest machinery – “the hum and gulp of the thresher”, “straw hanging undelivered in the jaws” suggesting that the woman sees this large equipment as something that is almost alive. The use of assonance helps establish their large size as the long sounding “u” and “o” sounds elongate the lines whilst sibilance and alliteration are used to add fluidity and aural texture – “standstill/straw”, “big/belt”.

The freshly harvested field is described as “stubble”, interesting imagery which elucidates the rural backdrop. The build-up of tension as the workers come to sit and eat is heightened by the sudden silence as the thresher and belt are switched off – the feeling of “such quiet” is created when the “hum and gulp” stops. The deafening degree of the silence is perforated by the sound of “their boots crunching” marking their approach. The feeling of routine is felt particularly in the second stanza, due to the dutiful tone present as the woman carries out what she is asked and expected to do by her husband. This further makes clear the very rigid relationship between husband and wife or simply man and woman at the time. Superior language is used on the rare occasions when the husband speaks and, while not using a hostile tone of voice, he orders or “tells” rather than “asks” his wife what she should be doing – “give these fellows theirs, I’m in no hurry” “away over there and look”.

This displays a confidence (or arguably a cockiness) which comes from being surrounded by his presumed employees and his wife, both of which play roles of servitude in his life and are seen as his inferiors. The husband in this situation can be inferred to be based on Heaney’s father, just as the wife is based on his mother. The husband’s attitude can be looked at in two different means – one might argue that he is patronising and controlling of his wife, as the flippant language used to describe his approach to engaging with her belittles the efforts she has put in to pleasing him – “plucking grass in handfuls and tossing it in the air” “boys like us have little call for cloths”. On the other hand, one might counter that while he does see himself as her superior, this is not done in any malicious or tyrannical way.

He gently teases her (suggested by words such as “winked”), and the inequality within the relationship is not bothersome to the woman, probably because this is “just how things were” at the time – the traditional husband-wife relationship was accepted to be this way and both men and women were perfectly happy to live and be together in this manner. The woman lays particular value on taking care and using her best things (which seem to be personally significant to her, for example “my linen cloth”) despite his dismissal. The desire or obligation to ensure he is content is again made clear when she pours the man “a cup” and butters his bread in the way that “he likes”, and that she walks over to examine the harvest he is so proud of “even when I don’t know what to look for”. This, whichever lens it is viewed through, depicts the image of the rural woman as a being of servitude and reflects the social context of the poem.

The third stanza sees the woman examining the “good clean seed” and Heaney making use of the aforementioned childlike imagery, creating the sense of unfamiliarity. Assonance of the letter “o” and “double-o” sounds feature heavily in this stanza, creating a “whistling” sound in the aural background of the poem, which reflects the “coolness” of the seed described in this verse; “innumerable and cool” “chutes ran back to the stilled drum”. She likens the pitchforks of the field to “javelins” which “mark lost battlefields”. The metaphor is extended as she “moved back between them” – this suggests she is dodging the forks as though they were being thrown like the javelins they were likened to in the previous line.

This creates an underlying feeling of ominousness and looming danger – as though she is “treading on eggshells” to avoid something, perhaps conflict with her husband, or even that she is struggling to keep up with her duties as a wife and a woman of the time. This verse also sees the tone slowing and a sense of solitude is felt as she is “lost” or “left out” due to her lack of knowledge on the harvest she examines. Heaney uses this to make a statement that he understands how hard the women of that era worked. Heaney himself may have empathised with the isolated feeling of the narrator of the poem, as he himself would have felt that he had no role or specific purpose on the family farm – he struggled as a young adult with the decision to break free from tradition and become a writer or to stay and lead what he saw as a redundant lifestyle. The final verse paints a picture of the men as they “lay in a ring of their own crusts and dregs”, a depiction of sluggishness and laziness but also of fullness – at this point the tone starts to change slightly as the woman sees that the men are content with what she has done.

Her husband boasts “as proud as if he were the land itself”, reiterating his confident and self-righteous character. The woman has expended her purpose, and the short sentence “and that was it” mirrors the brief period of time when she was “needed” in the field. The line “I belonged no further to the work” is set on its own and finished with a full stop to create striking poetic impact and allow the reader to pause and consider the idea that her role has been exhausted, and that the relationship is one born not out of love, but of practicality. The tone changes strikingly in the final two lines, set off by the word “but” – it becomes much more relaxed, even relieved.

The subtle, seemingly meaningless gratification the woman receives for her hard work is only that the men “kept their ease… grateful”. The fact that she has done her job to satisfaction makes the woman feel happy and perhaps explains why she does not seem to complain about her role of servitude, again reiterating the idea that both parties are not bothered by the inequality in the relationship. Overall, the poem “The Wife’s Tale” effectively takes the reader through the traditions of the rural wife and immortalises her role at the time, displaying the differences in the modern woman and the women he grew up observing. He respects and empathises with the voice of the poem due to his own feelings of isolation and limited usefulness, and commemorates both his mother and father in their traditional gender roles. 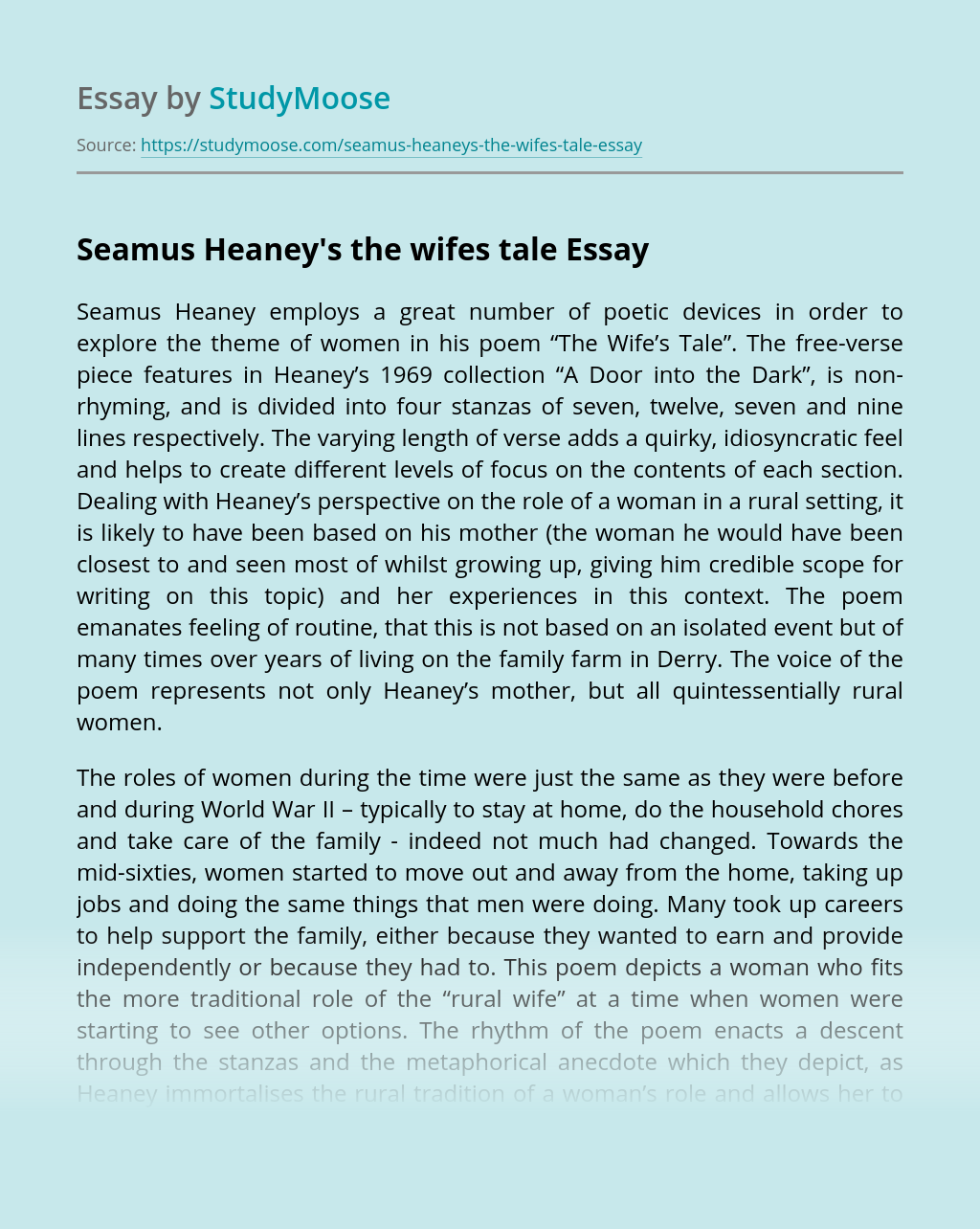