Compare and contrast two of Seamus Heaney's sonnets, 'The Forge' and 'Strange Fruit'

The Forge is a descriptive poem in which Heaney celebrates local craftsmanship, explores cultural roots, and discusses social history. The forge described in the poem in one that the poet passed every day on his way to school. Using the smith, an ordinary person, as a metaphor of himself, Heaney celebrates artists in the community, as well as the creation, beauty and perfection in art. The central idea, however, appears to be the mystery and sacredness of this creative process. The work of the forge is presented as an extended metaphor for the construction of a work of art in general (in Heaney’s case the crafting of poetry).

Don't use plagiarized sources. Get your custom essay on
“ Compare and contrast two of Seamus Heaney’s sonnets, ‘The Forge’ and ‘Strange Fruit’ ”
Get custom paper
NEW! smart matching with writer

The reader, as an on-looker, is ‘outside’ peering in at the ‘unpredictable’ and inexplicable mystery. One may catch glimpses of the beauty in the making, ‘the fantail of sparks’, or hear snatches of its elegant sound, ‘the short pitched ring’ or the ‘hiss’, but the creation of art remains a mystery, beyond the reach of the non-artist.

Strange Fruit is one in a trilogy of poems known as the ‘bog poems’ by Heaney. This set of poems predominantly reflects upon the sectarian violence in Northern Ireland, where killings were ritualistic and offerings from the villages to ensure a good harvest the following year. This particular bog poem is filled with images of death and dying. Inter-textuality is seen where the title ‘Strange Fruit’ refers to a song sung by Billie Holiday about the execution of black men in America. The bodies hanging from the trees are ‘strange fruit’–a form of ritualistic execution.

On-lookers commiserate and sympathize for the ‘exhumed’ female body, but are also taken aback by the power and resistance of the ‘beheaded’ at the moment of death and in the face of (the poet’s) scrutiny. Her ‘blank’ eyes express something that the poet has to treat with distance, an ‘outstaring’ expression demanding ‘reverence’ and ‘beatification’.

The Forge is a Petrarchan sonnet of fourteen lines in two parts. The octet (first eight lines) chiefly gives a picture of the actions and sounds inside the forge, whereas the sestet (the following six lines) shifts the focus onto the smith himself. This division allows the anvil as an altar to be emphasized at the crucial part of the poem, thus emphasizing the sacredness of the creation of art. Strictly speaking, this poem is not effective as a sonnet due to a defective rhyming pattern. The pentameter rhyme is uneven and the rhyming scheme is irregular-abba, cddc, efgfeg. Some of the rhymes are off-rhymes rather than true. This technical imperfection, however, does not result in weakness nor failure of the poem as a whole, but adds a ironic touch instead. While Heaney celebrates the beauty and perfection of art, he employs an imperfect poetic form, once again reinforcing the sacredness and impenetrability of art. This breaking of poetic customs also cleverly reveals the naturalness and ingenuousness of language in the 20th century.

Strange Fruit is also a sonnet. The octet is the descriptive section of how the girl (symbolized as the ‘strange fruit’) is exhumed, and a more detailed elaboration of how she looks. The line ‘Diodorus Siculus confessed’ suggests a break in the poem with a change of present to past tense. Here we move from the description of the body’s head in the here and now (present tense) to the distant past of her death (past tense) and those who observe her death or her remains (Diodorus Siculus and the poet).

Both sonnets open directly and distantly. The unsophisticated opening line in The Forge ‘All I know is a door into the dark’ justifies the poet’s cause in the poem. As an onlooker to the forge, the poet knows nothing more than the ‘door into the dark’. He does not understand and cannot perform the tasks of the smith. In Strange Fruit, the simple sentence ‘Here is the girl’s head like an exhumed gourd’ makes for a straightforward, blunt opening, and also contributes to the deadly image of the dug-up female body.

All the imagery in the poem The Forge is generated by the forge and its surroundings. Darkness prevails throughout the poem (the only colour mentioned is the ‘fantail of sparks’), yet ironically it is in this murky site that artistic creativity and spiritual energy come into being. The darkness is enticing and explosive, just as the creation of art is miraculous and mystifying. That true beauty is created out of old, useless equipment, ‘old axles and iron hoops’, is yet another paradox. The central image of the poem is the ‘anvil’, which Heaney allows two implications. The ‘horn’ is associated with the legendary beast of medieval romance, the ‘unicorn’ draws attention to the romantic aspect of creativity, and the ‘square end’ is associated with a religious altar, underlining the sacredness of creativity.

The three compound word images ‘oval-faced’, prune-skinned, prune-stones’ seen immediately after the opening in the Strange Fruit serve as a metaphor of the strange fruit. The use of figurative language in ‘dark as a turf clod’ helps to capture both the visual aspect of the girl’s head and its association with the earth, the soil. The repetition of the girl’s ‘outstaring’ expression is strong. She seems to have strength and resistance to letting others turn her into an object of worship or ‘reverence’.

Sound is a key pictorial feature in The Forge. The word ‘sparks’ suggests a sound of colour and vibrancy. Onomatopoeic sounds such as ‘ring’, ‘hiss’, ‘slam’ and ‘flick’ bring about a musical quality, alliteration in ‘grunts and goes’ effects in the sounds of the smith’s work, whereas the flat ‘e’ and ‘a’ sounds in ‘somewhere’, ‘square’ and ‘altar’ provide a background resonance of weight and heaviness, highlighting the weight of the anvil and its central importance.

Sound is also essential in Strange Fruit. Soft, delicate sounds such as in ‘unswaddled’, ‘wet fern of her hair’ and ‘her leathery beauty’ contrast distinctly with the ugly depiction of the ‘exhumed’ head. Alliteration of the ‘p’ sound in ‘pash’ and ‘perishable’ is explosive, and the painful ‘b’ in ‘broken nose’ emphasizes the reality of the girl’s deadness. 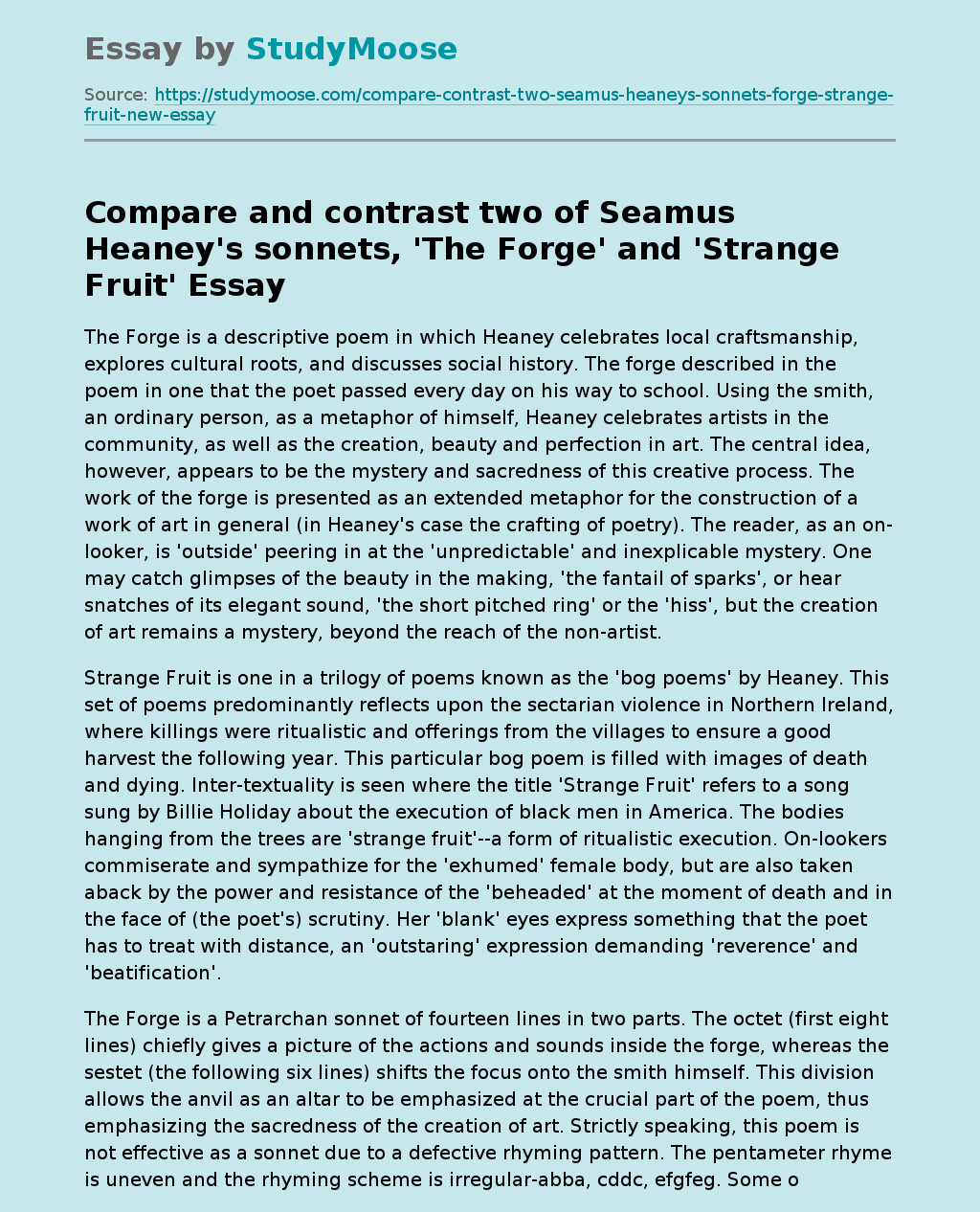