Shakespeare is famous for so many reasons, but one of the biggest is his extremely famous sonnets. A study showed that amongst the top five were sonnet number 116 and sonnet number 130. Both of these poems have some very different techniques and others that were quite similar. By looking in detail at both poems you can see these poetic techniques which will allow you to compare the two poems. Both of the poems are sonnets which are the typical writing style of Shakespeare.

Don't use plagiarized sources. Get your custom essay on
“ Similarities and Differences in the Use of Poetic Techniques in William Shakespeare’s Sonnet 116 and Sonnet 130 ”
Get custom paper
NEW! smart matching with writer

Sonnets contain three quatrains and a rhyming couplet which makes a total of fourteen lines. The rhyming schemes are the same in both poems: ABAB for the first quatrain, CDCD for the second, EFEF is the third and GG for the final rhyming couplet. Although in the first poem the B’s are eye rhymes and F’s are imperfect rhymes (the rest being true rhymes) the second consists of only true rhymes. The use of the rhymes is to make the poem more memorable.

Of course both poems are written in iambic pentameter, another characteristic typical of Shakespeare’s poems, which give the poem a specific rhythm (stressed unstressed). As for the poetic techniques, some are included in both poems whilst others aren’t. One of the main and most common things that Shakespeare uses in his poems is imagery. Imagery is present in both poems such as on lines 5 to 8 in poem 116. ‘O, no, it is an ever fixed mark, d That looks on tempests and is never shaken; – It is the star to every wand’ring bark, -Whose worth’s unknown, although his highth be taken.

This entire quatrain paints not only one, but two images. The first one is of a star shining in the sky guiding a boat even though there is a storm occurring and the second one is of the distance of the star being measured as a person tries to put a price on it. Another example in poem 130 would be line 4 where it says ‘If hairs be wires, black wires grow on her head’. The use of the imagery that Shakespeare uses is to address our senses. In the example 116 he is addressing more of our visual sense as we can see the image whilst in 130 it is not only our visual but also our kinesthetic sense because we imagine the way that the hair feels. I would say that Shakespeare uses more imagery in the second poem although in the first the imagery has deeper meanings. Alliteration and assonance are also used in both poems but I am not quite sure if they are one of his poetic characteristics.

In the first poem it occurs more often and it can even be found in the very first line ‘Let me not to the marriage of true minds – Admit impediments…’ Me, marriage, and minds are examples of alliteration but they can also be a part of Admit, and impediments to form assonance. I say this because m is a consonant and assonance is when similar consonants are repeated in multiple words. In the second poem it is only found once in the line ….But no such roses see I in her cheeks… ‘ The use of this is to make the poem flow and sound better. In poem 116 assonance is used to include the poetic technique known as onomatopoeia. ‘Within his bending sickles compass come;’ The use of this is to address our auditory sense as we can almost hear the Grimm Reapers sickles slicing the rosy lips and cheeks. Another thing the poet uses quite often is repetition. This is only found in the first poem (116). ‘Love is not love – Which alters when it alteration finds…’ Here the words love and alter are repeated which also makes the poem more memorable.

Quite commonly Shakespeare uses enjambment, which is to split a sentence and put each half on different lines. In my opinion this was done so that he could more or less respect the rules of the iambic pentameter, but it could also have been done to make the reader pause or read it in a specific way. It is found once on the first line of 116 as ‘love is not loved Which alters when it alteration finds…’ and on line 7 in poem 130 as ‘…And in some perfumes is there more delight – Than in the breath that from my mistress reeks…’ Of course the famed writer also uses metaphors and similes to make comparisons. ‘O, no it is an ever fixed-mark… although his highth be taken.’ form 116 and ‘If hair be wires, black wires grow on her head’ from 130. In these examples however there are only metaphors that compare love to a star and hairs to wires. In both poems Shakespeare gives a definition by a negatives ‘love is not loved Which alters when it alteration finds…’ where he tell us what love is not instead of what it is. Similarly, in 130 ‘My mistress’ eyes are nothing like the sun;’ He tells us what his mistress’ eyes aren’t like, instead of what they are. Another thing that poem 116 has but not poem 130 is the use of a paradox.

On the very last line Shakespeare says that if he is proved wrong he ‘never writ, nor no man ever loved.’ Firstly it is impossible for him to have never written because it is one of his poems being read, therefore the first part is a paradox. In addition, the second part would work for an audience reading or listening to the poem in the 16th and 17th century. Shakespeare would have not been famous back then so they wouldn’t have known he had written so many plays. So he uses something that the audience can relate to, which is the feeling of falling in love. This means that he wrote his paradox specifically so that he would appeal to the audience. Finally one of the most important thing about Shakespeare’s poems is the rhyming couplet at the end. This is usually where he delivers the punch line. These punch lines are the ones with the most meaning. Because they are at the end they continue to resonate in the audience’s head even after the reading is finished which also makes the poem easier to memorize. In conclusion, the two poems have a variety of different literary and poetic techniques that all come together to create beautiful sonnets easily recognizable as Shakespeare’s. As you read through the poems you realize that the first sonnet (116) is a platonic description of love whilst the second (130) is more of a parody. The reason both of these poems to have such great success is because they are so well thought out, said. They are also about universal themes so that everyone can relate to them and enjoy.

Similarities and Differences in the Use of Poetic Techniques in William Shakespeare's Sonnet 116 and Sonnet 130. (2021, Sep 30). Retrieved from https://studymoose.com/similarities-and-differences-in-the-use-of-poetic-techniques-in-william-shakespeare-s-sonnet-116-and-sonnet-130-essay 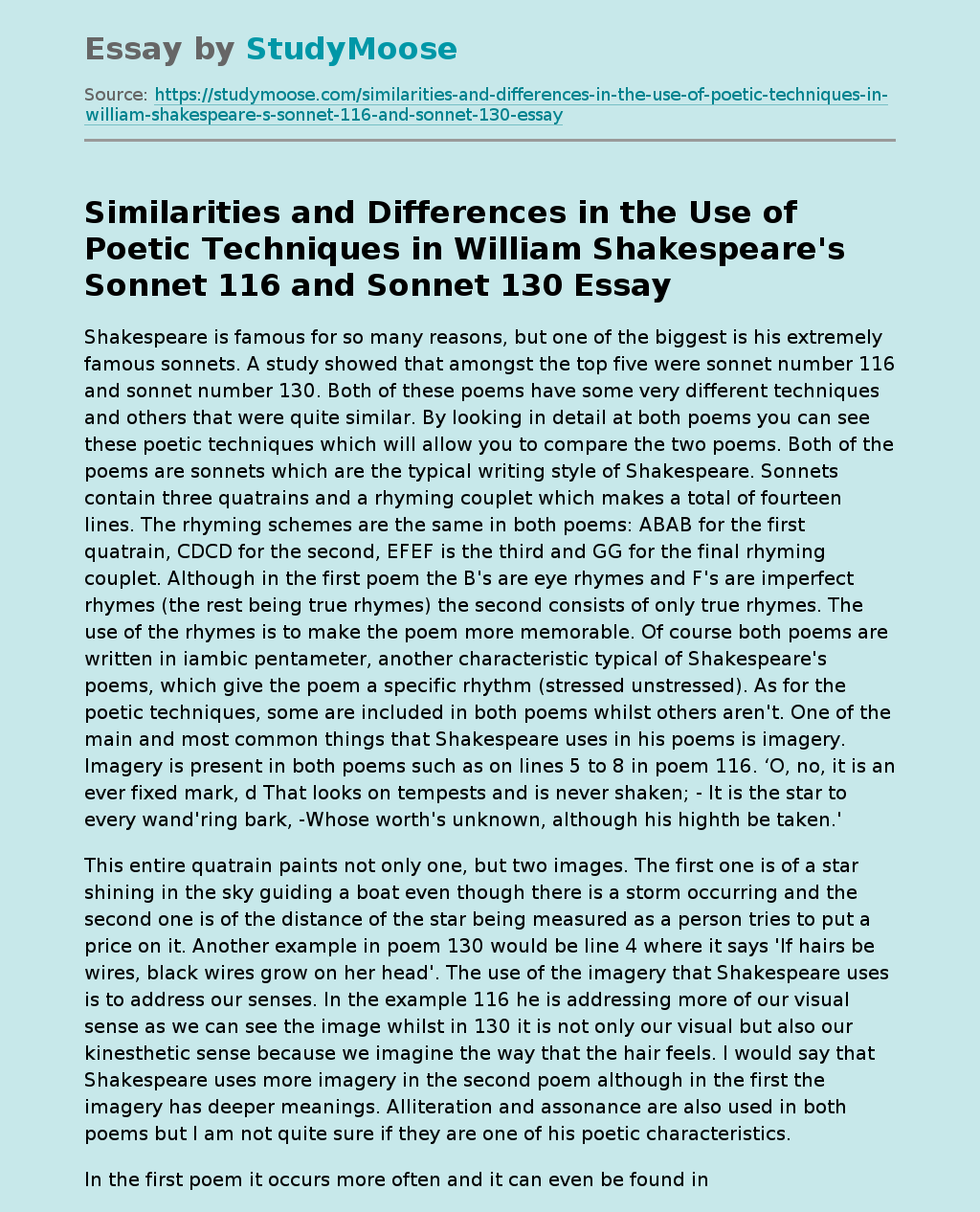