Don't use plagiarized sources. Get your custom essay on
“ Blackberry Picking and Death of a Naturalist by Seamus Heaney – The theme of childhood ”
Get custom paper
NEW! smart matching with writer

For instance, the author says “For a full week, the blackberries would ripen.” by so doing; the author tends to show how wonderment or rather immaturity is wondrous to adults (Collins, 43).

Unlike in Owen Sheers in ” Hedge school, childhood in ”Blackberry picking” is contradicted. In this case, the author uses his ambiguous nature to depict sexual imagery whereby he tries to portray loss of innocence.

Unlike in ”Death of a naturalist” and ”Blackberry picking” by Seamus Heaney, this does not bring out a clear picture to the reader regarding the theme of childhood.

In relation to ”Blackberry picking” by Seamus Heaney, the author tends to further the aspects of childhood by particularly bringing forth a sense of growing and various influences associated with a specific rite of passage. In ”Blackberry picking”, the author presents the theme of childhood in a unique way whereby he bring forth a sense of emotions states uplifting in childhood adventurous corridors. In addition, the theme of childhood in the poem is depicted when the author tries to show how lust and confusion is lost and portrays the persona to have an increased capacity.

In conclusion, Seamus Heaney work in ”Death of a naturalist” and ”Blackberry picking” signifies outstanding poetry work that uses diverse stylistic devises to depict various themes especially the theme of childhood. Essentially, the theme of childhood is clearly depicted in ”Blackberry picking” through the use of blackberries. Unlike in Owen Sheers in ” Hedge school”, Heaney serves to craft a sense of anxiety or rather longing among the audience through the persona’s bitter and exciting report of a childhood memory (Stephens, 2007). In addition, the author presents an environment that is dependence on nature rite of passage and mental change into an aging and a dynamic world.

Blackberry Picking and Death of a Naturalist by Seamus Heaney - The theme of childhood. (2015, Apr 04). Retrieved from http://studymoose.com/the-theme-of-childhood-in-death-of-a-naturalist-and-blackberry-picking-by-seamus-heaney-essay 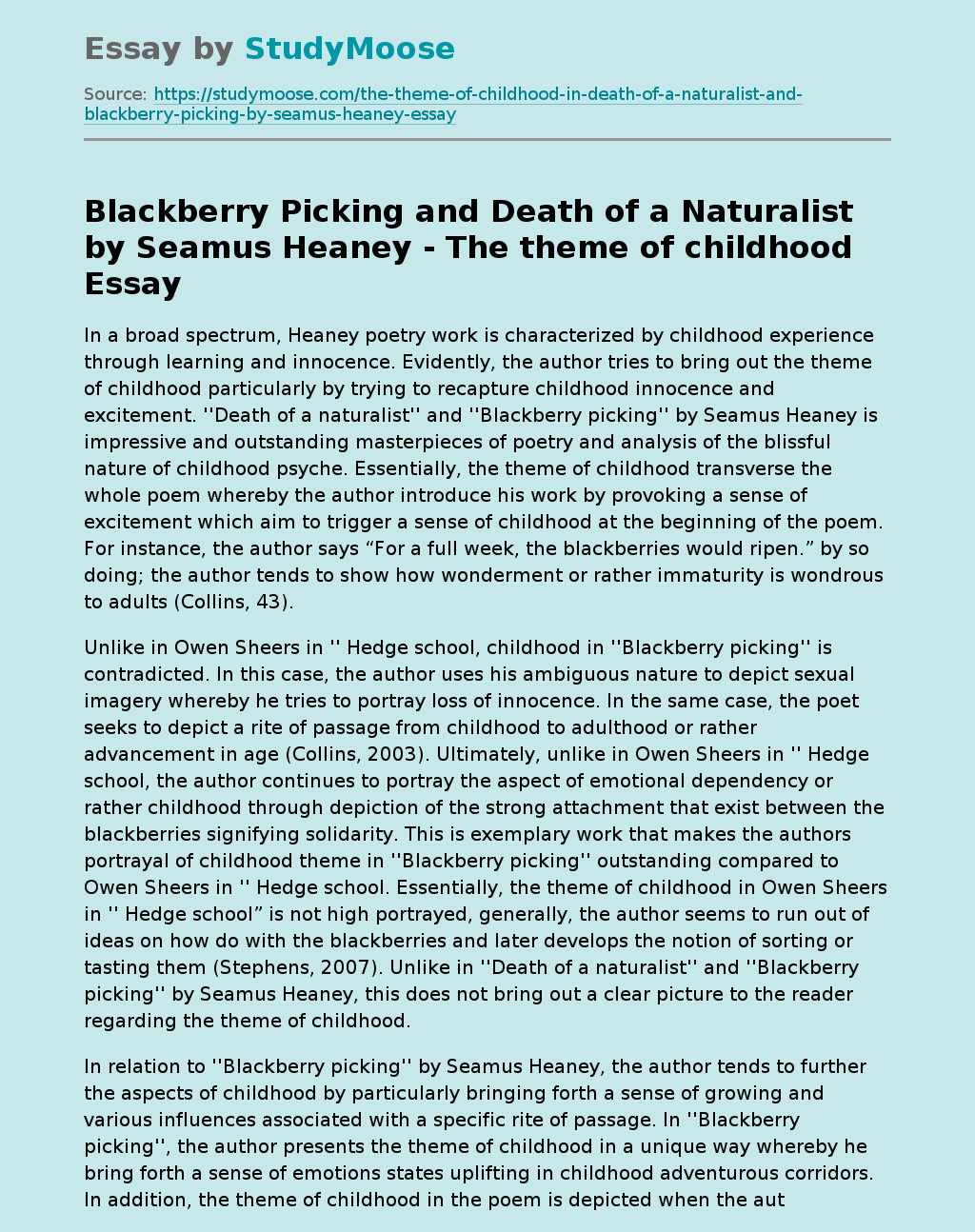