'Afternoons' by Philip Larkin and 'Churning Day' by Seamus Heaney

There are only a few similarities between ‘Afternoons’, by Philip Larkin, and ‘Churning Day’, by Seamus Heaney. These feature mainly in the structure of the two poems. They both use enjambment for the whole length of the poem, with just one end-stopped line present in each. Enjambment gives both poems a sense of continuous movement. This is appropriate in ‘Churning Day’ as it represents the motion of the person churning the butter. It also makes the voice of ‘Churning Day’ sound out of breath, as if they are breathing in the middle of sentences, also suitable as they have just ‘slugged and thumped for hours’.

Don't use plagiarized sources. Get your custom essay on
“ ‘Afternoons’ by Philip Larkin and ‘Churning Day’ by Seamus Heaney ”
Get custom paper
NEW! smart matching with writer

The sense of motion is appropriate in ‘Afternoons’ as the poem is about transience from childhood love and innocence to marriage and the hassles and mundane nature of everyday life.

Although there is no rhyme scheme in either poem, Philip Larkin uses many words such as ‘bordering’, ‘lying’ and ‘pushing’ with the same endings. This is used as a rhyme scheme, not only to keep the poem flowing but also to add a sense of monotony that now prevails in the women’s lives.

As the poem flows more it makes it sound like Larkin’s own thoughts as he observes these ‘young mothers…setting free their children’. The lack of rhyme scheme is used to give the reader the impression of free flowing thought or speech again in ‘Churning Day’. This is appropriate as it is a memory. It is clear that it is a happy memory for Heaney as he can remember so much of it, and although he remembers the ‘acrid’ stench of the house after churning day, he talks of the butter as ‘gold flecks’ and ‘coagulated sunlight’, which are pleasant and fond memories.

It was a happy memory as the family got together to help, as his ‘mother took first turn’ and he talks of more people, saying ‘we moved’ and ‘our brains’, thus showing a pleasant feeling of togetherness.

The emotions in the voices of the poems are very different. Although Heaney writes in a sensuous manner about the family event of churning day, clearly remembering the ‘plash and gurgle of the sour-breathed milk’ and the house as ‘acrid as a sulphur mine’, Larkin does not talk so fondly. The first line talks of summer ‘fading’ but Larkin could be using this as a metaphor for the prime of these mothers’ young lives disappearing. Summer fades into autumn, when everything begin to die and age, similar to what is happening to these young women. Lovers who ‘are all in school’ have replaced them in their courting places and they regimentally ‘assemble’ ‘in the hollows of afternoons’. He talks as if everything is lost and they now follow a set regime around their children and their lives seem empty with these ‘hollows’. He talks of the ‘trees bordering the new recreation ground’ as if they are guards who trap the women in this monotonous lifestyle.

The novelty of life and love has worn off for the ‘young mothers’ although they have the luxuries of television, that is where ‘the albums, lettered Our Wedding’ have been discarded. Their children ‘expect to be taken home’ and spend time finding ‘unripe acorns’. The idea of ‘unripe acorns’ suggests that the women were not ready for marriage and commitment and the responsibility of their children, who are ‘pushing them to the side of their own lives’. The thrills of love and setting up home have worn off, unlike in ‘Churning Day’ where as Seamus Heaney sounds excited and eager to see the butter form. In this way, however, they are similar.

In the past the ‘young mothers’ must have been excited and eager too, but to see the relationships and marriage form, to set up home and have children. The wedding day is like the moment the butter starts to form, but as in ‘Churning Day’ there are consequences. The boredom of life and responsibilities brought about by children are like the ‘stink’ in the house ‘long after churning day’. The brains of the people in Heaney’s household were ‘full of clean deal churns’, able to think of nothing else but churning day, as the young women’s lives are filled with the mundane responsibilities of married life and children. 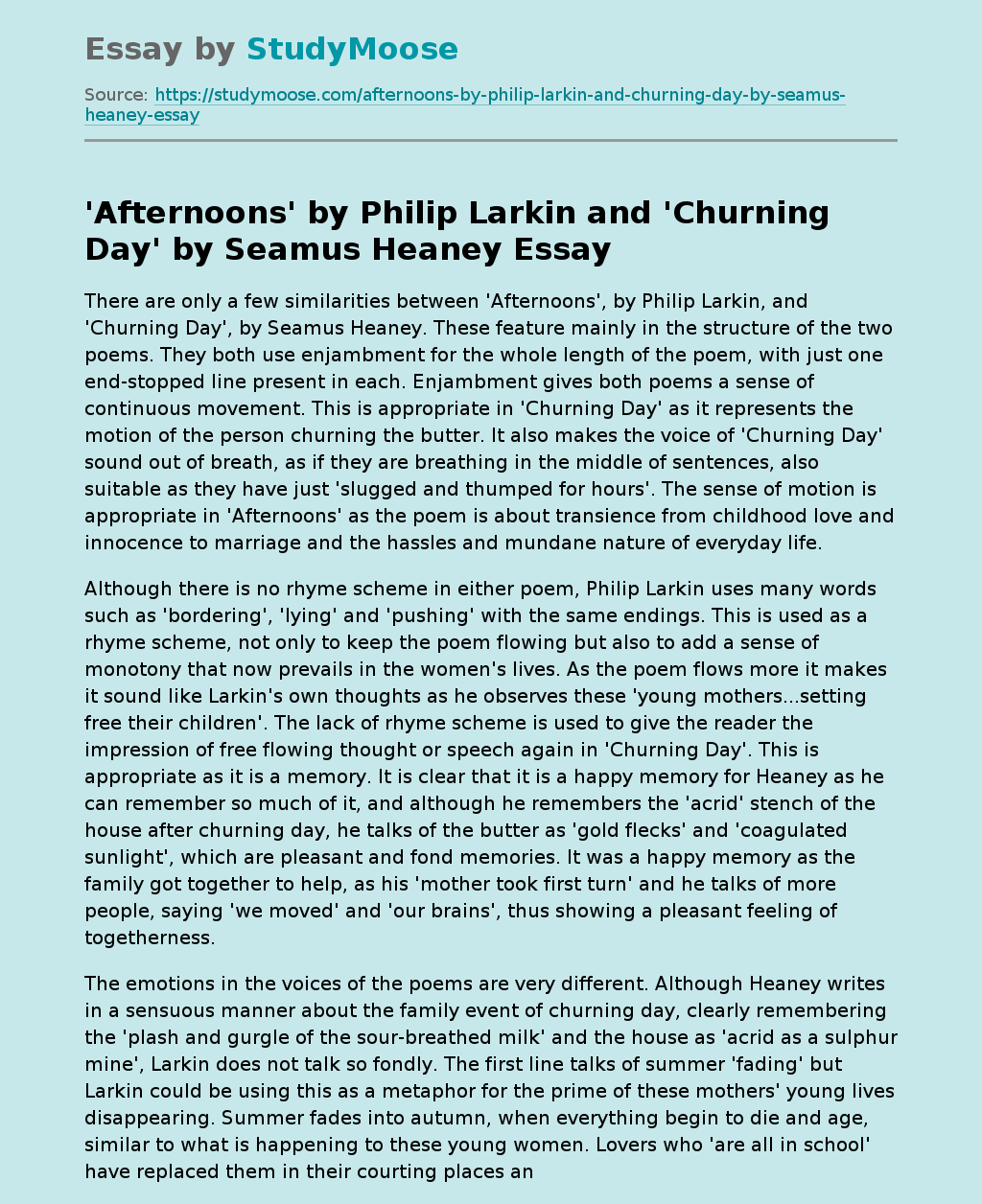