Adrienne Rich’s poem Living In Sin is a free verse poem about a woman’s fairy tale dream of marriage versus the reality of the sin of not loving each other. The subject of the poem is a woman starting a life of hope and happiness in a perfect relationship only to learn the true reality of the relationship. The speaker of the poem observes the woman’s life as sad and boring using the past tense versus the present, and short run on lines that set the hopeless mood of the poem.

Don’t waste time
Get a verified expert to help you with “Adrienne Rich’s poem: Living In Sin” Analysis
Hire verified expert
$35.80 for a 2-page paper

Imagery and colorful language is also used to describe the unhappy relationship throughout the poem. Living In Sin shows a woman’s life without rhyme in four meaningful images and as the tone changes she sees the relationship/marriage she expected and the relationship as it actually is.

To begin with the speaker uses run-on lines, past tense and tone to illustrate the first image. “She had thought the studio would keep itself…” shows that in the beginning of the relationship she pictured a fairy tale marriage like Cinderella.

There would be no chores, no dusting, everything would be a perfect marriage. The use of past tense means she is thinking of what is not. The lines are also short and choppy making everything sound hopeless. The next line, Half heresy… the speaker comes back to the present tense of the leaky faucet, noise and dirty windows. The mood then shifts again and she paints a pretty picture of her home with fruit and happiness on the table, a piano with an expensive shawl, and a cat as a nice pet.

The short, choppy run on lines makes the woman’s life appear hopeless and tired of doing this day after day.

The next image the speaker speaks about is the dinner from the night before. By using the past tense again, Not that at five…. shows the image of a romantic dinner that never was. The poem looses this imagery with the sound of the milkman waking her up as the cold morning dawns only to ruin her fantasy dream of the frustration of cleaning up from the night before. The use of language to describe last night’s cheese is a metaphor to show how sour their relationship really is. The speaker also uses three sepulchral bottles, sepulchral meaning burial or tomb, as a metaphor or image of the bottles lined up as dead soldiers from the night before of drinking and partying. The woman feels as if she too has died inside and is living in a tomb. The bug, a pair of beetle-eyes would fix her own–, is another example of an image of what the woman doesn’t expect from life as she writhe under the milkman’s tramp…personifies her bending in pain.

Finally the man in her life is introduced. Again run on, choppy lines are used to describe him in only four lines shows he is not in her life very often and she is frustrated and angry at him. He is described as yawning which shows that he is ignoring her and just goes on with his on self absorbed life. He then plays the piano which is out of tune like their relationship is in need of help. Next he shrugs at the mirror and leaves for a cigarette suggests he doesn’t care about her. Then the reality, using past to present, as the woman realizes by the minor demons, her inner thoughts of the fantasy versus the reality of the house work he left behind for her to do.

The woman goes back to making the house look perfect on the outside to keep up the idea of a fairy tale life that she once thought she might have. The image of the coffee-pot boil over on the stove shows that even though she is going on like nothing is wrong, inside she is boiling. Comparative imagery is used to show life then and now in the the pears are now last night’s cheese, the cat is now a beetle-eye bug, a piano with a Persian shawl is now an out of tune keyboard, and no dust upon the furniture of love is now a dusty table-top. The illusion of a fantasy and now the reality of her life.

The final image ends with By evening she was back in love again, shows the fantasy versus the reality of waking to feel the daylight coming when she can start all over again. Like a relentless milkman up the stairs, she has to wake up and do the same thing day after day like the milkman waking up and starting all over again to deliver the milk. The woman goes back to her job that life will get better and someday will have a fairy tale ending, but until then she has to live in her tomb of a relationship, hence, living in sin of not being happy with what she has.

Adrienne Rich’s poem does an interesting job of describing the miserable life of a woman looking for love. She uses colorful language and imagery to show the dark, unhappy life of this woman. There is a lot of emotion and feelings throughout the poem. The words like, grime, writhe, coldly, sepulchral, beetle-eyes, jeered, and demons all give a feeling of the sadness that this woman feels every day. The poem is easy to read and feel the loneliness this woman has in four, choppy run on images. In conclusion, Living in Sin paints a picture of a woman finally realizing that her marriage is not a fairy tale ending. Through imagery, run on lines, and tone the sin is in the guilt from not living in the present and not being in love with her husband, who’s not in love. This was an interesting poem on the sin of not loving each other and accepting each other for who they are. 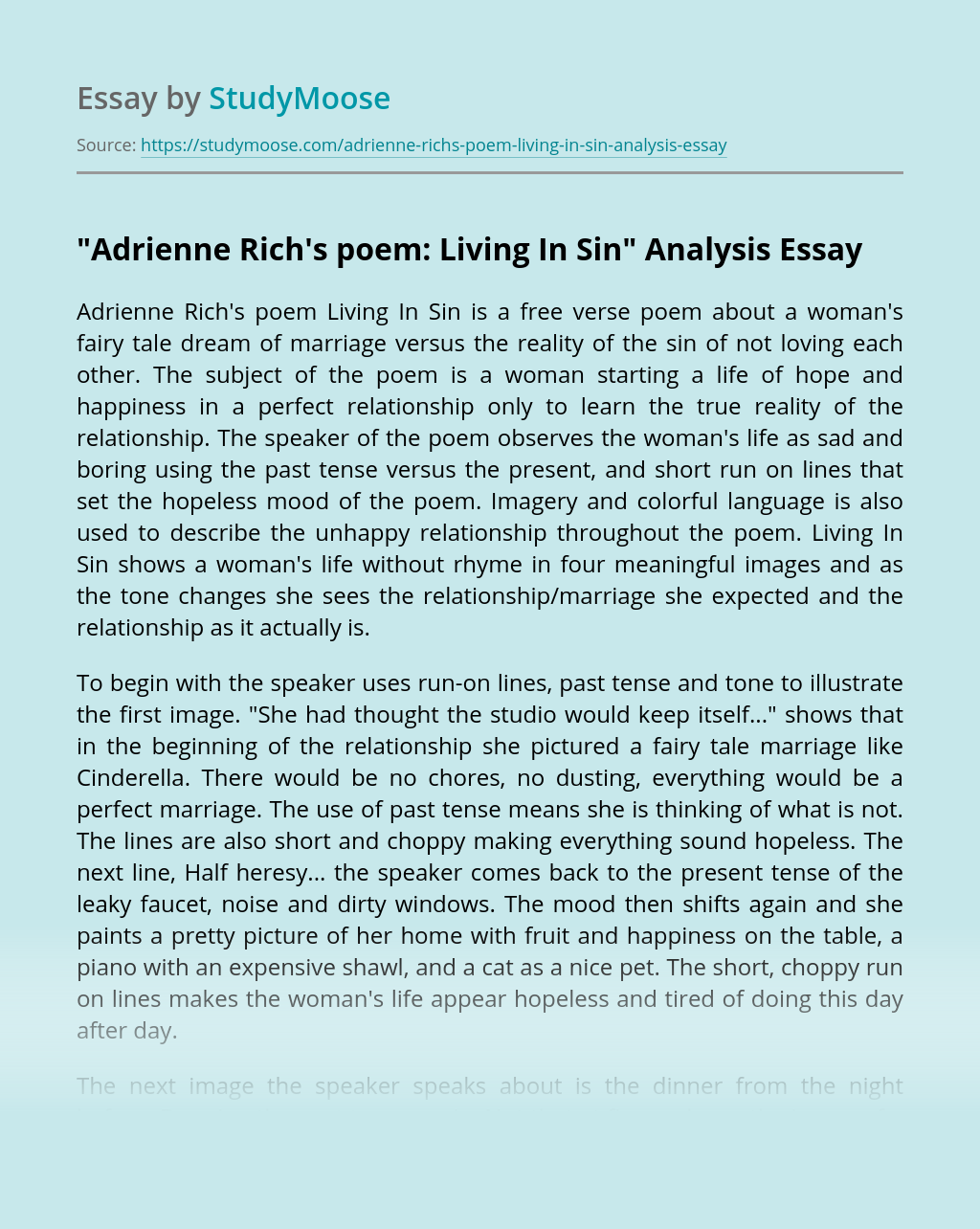