It is about an American couple that spends their holidays in an Italian hotel. It is a rainy day and the American woman sees a cat in the rain, which she wants to protect from the raindrops. When she goes out of the hotel, which is kept by an old Italian who really seems to do everything to please that woman, and wants to get the cat, it is gone. After returning to the hotel room, she starts a conversation with her husband George, who is reading all the time, telling him how much she wants to have a cat and other things, for instance her own silver to eat with.

Don't use plagiarized sources. Get your custom essay on
“ Short Story Analysis: Cat in the Rain ”
Get custom paper
NEW! smart matching with writer

Her husband seems to be annoyed by that and not interested at all. At the end of the story there is a knock on the door and the maid stands there holding a cat, for the American woman, in her hands.

Peculiarities of the introduction

Proficient in: A Rainy Day

This description creates an atmosphere that is sad, cold and unfriendly. • To create this atmosphere Hemingway uses words such as “empty” or “the motorcars were gone”. • foreshadowing of the state of the couple´s relationship: First it was nice, the spring-time of their love, and now there is only rain, their relationship got cold and unfriendly. • Another symbolic hint in this introduction is the war monument, which is mentioned three times.

This maybe is done to tell us that a conflict is to be expected.

You might ask… “Why are this cat and the one the maid brought up to the room made difficult to identify as one and the same animal? Why is the cat’s identity questionable, while George’s identity as the woman’s husband is not?“ The answer is…

• stylistic and narrative elements are considered in this study as purposeful strategies used by the writer. George’s identity is never questioned because the author places him in the immediate presence of the American woman, and emphasizes his reality by referring to him by name, while “the cat in the rain” is only a linguistically created fiction. The animal is seen only through the American woman’s eyes, and it is neither perceived by the husband, nor objectively presented to the reader by the narrator.

The author conveys through “Cat in the Rain” a limit to representing reality • Given this difficulty of reporting reality, two discourse analysts, (Ronald Carter and Michael Stubbs), were misled by Hemingway’s verbal technique that makes the cat appear “small.” They both consider the cat in the rain and the one the hotel maid brought up to be different because the latter appears bigger than the former. » These two discourse analysts are misled to this conclusion about the cat brought by the maid, on account of the stylistic and narrative devices that make the cat in the rain appear “small,” making it thus impossible to identify the two cats as one and the same.

Carter’s reaction • denies the identity of the cat that the maid brought up as the one in the rain: “I do not see a correlation here between ‘cat’ and ‘kitty.’ To me, this is a grotesque outcome to the kind of associations aroused in me by the word ‘kitty’ ” (Carter 76).

Stubss’ reaction • the maid’s is “a different cat”: “My interpretation is therefore that Hemingway implicates that it is not the same cat. He does this by inserting information which is otherwise irrelevant: that the maid brings a big tortoise-shell cat. Informally, we might say that there is no reason to mention what kind of cat it is, unless this is significant, and unless we are expected to draw our own conclusion” (Stubbs 209).

Why does the American woman see a cat from a room on the second floor of the hotel? The woman, or the reader through her eyes, would see the cat very close and could recognize specific details. At the end of the story, the maid appears at the door of the room with a specific “big tortoise-shell cat,” which the reader sees this time through the husband’s eyes. Its appearance is unexpected, because the cat is depicted with the two new epithets “big” and “tortoise-shell.” For this to be “unexpected,” the woman must neither see the cat from the first floor, where she could make it out clearly, nor from the third floor which is evidently too distant as a viewpoint. The second floor is, therefore, suitably distant from the cat for the author’s purpose to make it appear small, while actually leaving it unidentifiable by its size.

• The second device which reinforces the apparent smallness of the cat due to the relatively distant location of the room, appears in the following passage: The American wife stood at the window looking out. Outside right under their window a cat was crouched under one of the dripping green tables. The cat was trying to make herself so compact that she would not be dripped on. “I’m going down and get that kitty,” the American wife said.

The second device.. • consists in the use of two words: the past participle “crouched” and the adjective “compact.” • The cat could actually be small, but with these two words, we find ourselves facing a cat verbally made to appear small. And even at this early stage, the woman’s implicit presentation of the cat’s size when she uses the expression “kitty” is not reliable. “Crouched” and “compact” help make us feel it is quite natural for the woman to refer to the cat as “kitty,” it being a realization of what she wishes the cat to be like: “ ‘Yes,’ she said, ‘under the table.’ Then, ‘Oh, I wanted it so much. I wanted a kitty’ ”.

These two devices… • have the effect of concealing from the reader the cat’s true size and sort. • Besides, the woman’s use of the affectionate expression “kitty” further makes the reader believe that the cat is actually small. And this effect lasts till the final scene of the story, when the reader is brought face-to-face with a big tortoise-shell cat. • By carefully employing these verbal devices to make the cat appear small, the narrator skillfully created this effect of frustrated expectation. • the location of the American tourists’ hotel room and the use of the two words discussed above, serve to make it impossible to identify the “cat in the rain.”

Another device that makes the cat’s identification difficult lies in the specificposition of the husband lying on the bed, reading a book. • Had the husband been sitting on a chair, he might have gone to the window to have a look at “the cat” as a natural course of action. • To enhance the function of the three devices which produce the effect of unidentifiability (the location of the room, the two discussed words, and single witnessing), • the woman takes her eyes off the cat when she goes downstairs to get it and thus she loses certainty of the cat’s identity. • ***It is particularly noteworthy that the woman’s aversion of her eyes from the cat is carefully paired with single witnessing. When she looks away from the cat, it becomes impossible to restore the certainty of identity. In this way, by this carefully created setting and these stylistic techniques, the cat is made impossible to identify. The cat is an unidentifiable cat, effectively named “Cat in the rain”

• is endowed with ample means of identification in the story. • The first specification of George comes from the fact he is immediately present in the room with the woman so his wife sees his existential reality. • Secondly, he is identified by being depicted lying on the same bed and remaining in the same posture before and after his wife goes downstairs. • At the level of what Mick Short calls the character–character dimension of discourse, the husband’s sameness of posture symbolizes the woman’s feeling of boredom with him; while, at the narrator–narratee level of discourse, it helps convey greater probability in regard to the stability of the man’s identity.

On the story itself

• The story begins with a reference to the two Americans and a description of the general setting, then shifts to the viewpoint of the woman. • Reference to the man is from the woman’s perspective. • After the woman returns from downstairs, “empathy” (Kuno) is transferred to the man. • Even when empathy was with the woman, she was referred to only by the common nouns “wife” and “girl.” After her return, the man is referred to by a proper noun, “George,” one of the highest degrees of empathy • Empathy: (E [George] > E [a wife, a girl]) (Kuno 203–270). • Ex:

-wife:“She opened the door of the room. – husband: George was on the bed, reading”

• The direction of specification is from less specified to more specified, as we see in the reference to the man as “husband” before she goes downstairs, and “George” after she comes back. • This follows the same natural course of specification as that which Tuen van Dijk calls “normal ordering of state descriptions” (van Dijk 106) (general → specific, or whole → part / component). • This “general to specific” reference does not appear in the sequence from “a cat,” in the early part of the story, to “a big tortoise-shell cat”, at the end, because the initial cat, as I have discussed so far, is not specified as “small” or “big,” “tortoise-shell” or not. • Greater specification of a referent is possible only when it has been introduced with less specification. To symbolize this slippery nature of reality beyond words, Hemingway created a linguistic fiction in the guise of a “cat in the rain,” using the above discussed stylistic and narrative devices. This is most evident when the cat is compared with George. Though set within the diegetic world of the story, George’s identity is never questioned because he is placed in the immediate presence of the American woman. The existence of the cat in the rain, in contrast, is questioned because it lacks this immediacy.

Altogether I would say that the theme of the story is the problems that a relationship has, when one partner becomes dominant or repressive and the other is trying to change and improve the situation. If they are aware of their problems they might be able to save their marriage, but if they do not recognize that their relationship will become more and more like the depressive weather in this short story, until there will be winter when their love will die. 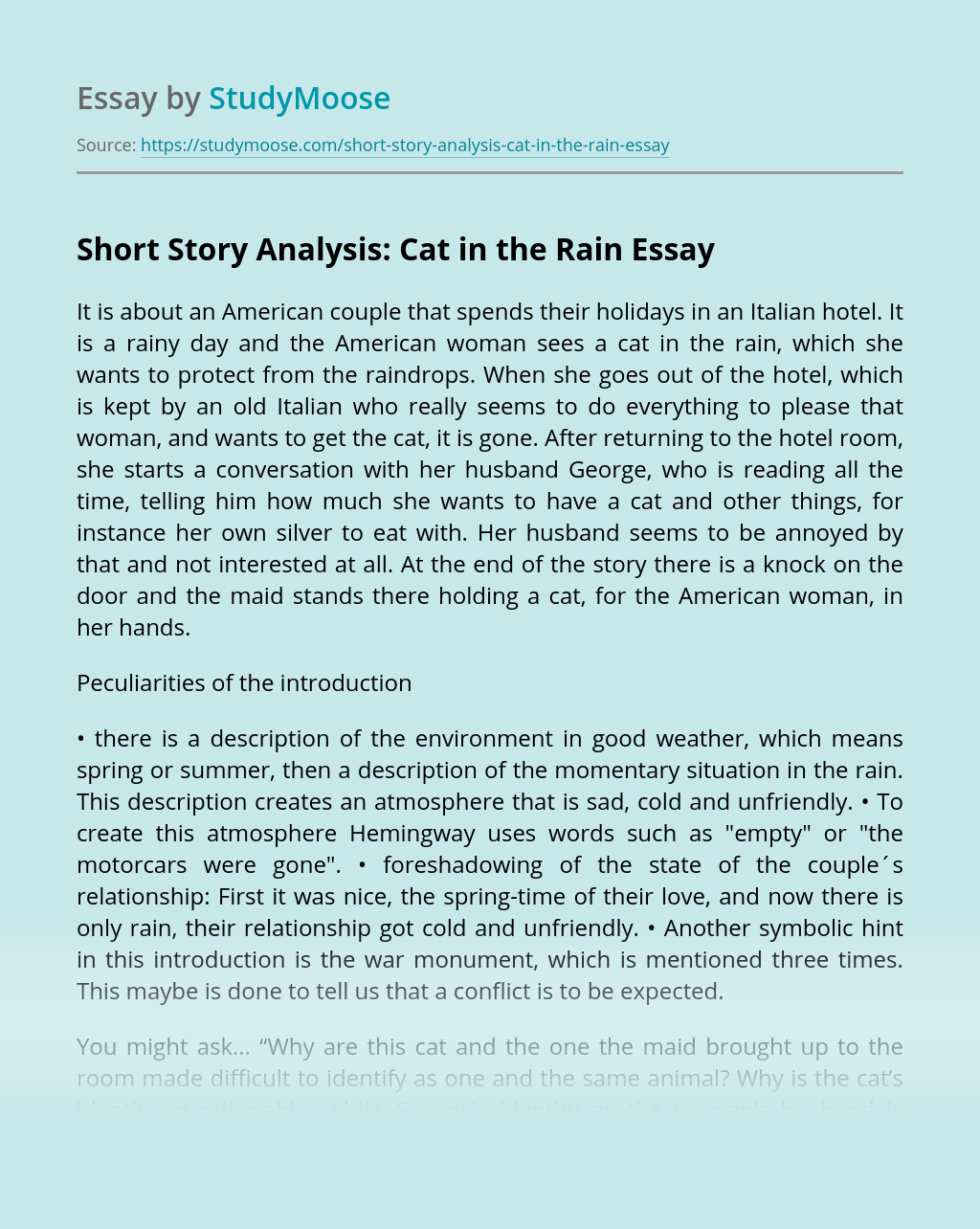