"Old Man at the Bridge" by Ernest Hemingway

“Old Man at the Bridge” was inspired by Hemingway’s travels as a war correspondent during the Spanish Civil War in the 1930s. Old Man at the Bridge demonstrates the power of narrative art. It takes a small, ordinary detail in a situation and by the art of story-telling transforms it into a powerful story about the tragedy of war. The old man becomes a symbol of the countless civilian victims of war– those “without politics.” The old man is going to die at the bridge–displaced, disoriented, alone.

Don't use plagiarized sources. Get your custom essay on
“ “Old Man at the Bridge” by Ernest Hemingway ”
Get custom paper
NEW! smart matching with writer

He’s not a cat, nor a dove, but a goat–who was “only taking care of animals.” The themes of the story are ‘many innocent people become victims of war’, ‘even when exposed to the atrocities of war some people do not lose their basic humanity.’ The story is laid in a war zone at a pontoon bridge across the Ebro river. The time is Easter Sunday 1938. Such geographical names as San Carlos, Ebro contribute to the credibility of the story.

A first person narrator who tells the story through careful description, reportage of dialogue and insightful commentary about the old man.

The narrator makes the reader see the old man. His engagement with him suddenly brings the old man into focus, he emerges out of the faceless, voiceless crowd. The Narrator’s consciousness of the approaching enemy “contact” is used to create the dramatic tension between the immobility of the old man and the coming destruction as he constantly observes the movement of carts across the bridge while talking.

The narrator’s conversation allows the old man to have a voice. The voiceless victims speak through the old man. The story does not really go in sequence. It starts off in the present, then goes back and forth between past and present throughout the whole story. The central character is the 76 yr. old man, a war refugee who has been uprooted and displaced by the war. The old man is “without politics,” who was only taking care of his animals, but who has had his world destroyed. He is disoriented, confused and disconnected. He has retreated into his isolated world in which he can only cling to his obsessive thoughts about his animals, and is too tired to go any further.

He will die at the bridge–another nameless innocent victim of war. The Scout is the narrator who creates the story of the old man at the bridge. Through his telling of the story, he gradually articulates who the old man is and what he represents. The Scout at the beginning is the impersonal narrator who sees the old man and decides to engage him in conversation. By asking the old man questions about himself, the Scout gradually understands the situation of the old man. At the beginning he thinks the old man is just resting so he encourages him to move on. In the course of his conversation he realizes the old man is disoriented, displaced and that he will not be able to move on, but that he will likely die at the bridge. The scout who begins as a detached observer comes to the painful realization that “there was nothing to do about him.”

And he ends with the bitterly ironic observation about Easter Sunday and the old man’s luck, which is no luck. The old man will soon cross that final bridge. There is one symbol of hope in the story. At the beginning of the narrator’s conversation with the old man, the birds the old man was looking after were referred to as “pigeons,” but by the end of the story, they become “doves,” symbols of peace in wartime. The narrator makes this switch as he asks, “Did you leave the dove cage unlocked?” It is unclear whether this is a slip of the tongue, because the narrator is clearly distracted by the impending arrival of the enemy, or if Hemingway is attempting to give the image of the birds flying away an even more positive tint by referring to them as symbols of peace.

"Old Man at the Bridge" by Ernest Hemingway. (2016, Jun 10). Retrieved from https://studymoose.com/old-man-at-the-bridge-by-ernest-hemingway-essay 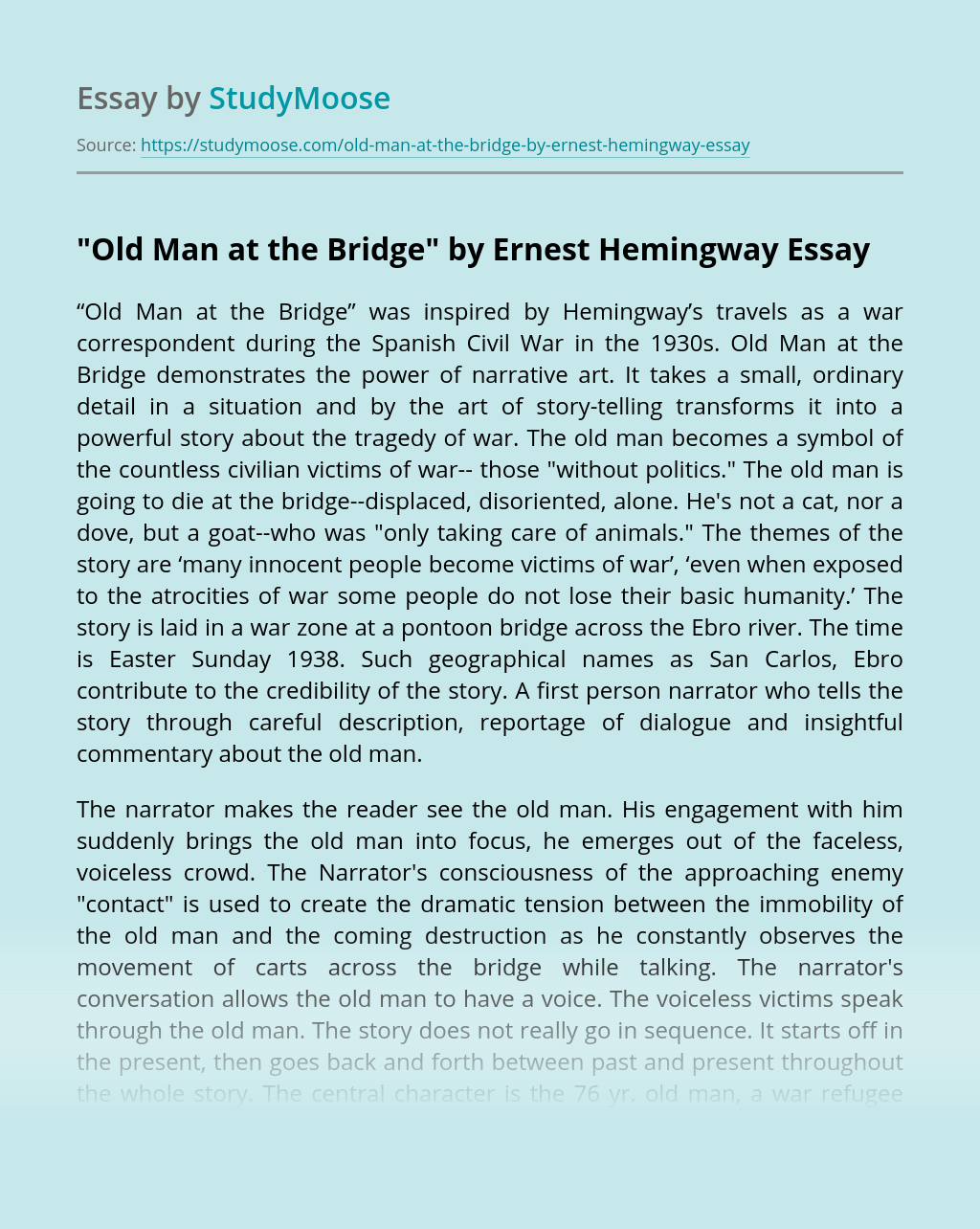