Between Two Worlds: Escape From Tyranny by Zainab Salbi

“Laurie Becklund is an award-winning Los Angeles journalist and author. A former Los Angeles Times reporter, she wrote the first story about Zainab in 1991, when Zainab was a young woman stranded in America due to the Gulf War.”

A summary of the book:

As a young girl, Zainab Sabli could never have imagined in her wildest dreams that the radio message that she would be hearing soon will have the profound impact on her life and the lives of several thousands of women all over the world.

Don't use plagiarized sources. Get your custom essay on
“ Between Two Worlds: Escape From Tyranny by Zainab Salbi ”
Get custom paper
NEW! smart matching with writer

About that most important message, she writes, “We happened to be driving down the Fourteenth of Ramadan Street one day with Aunt Lavla in July 1979 when an announcement came on the car radio saying that Ahmad Hassan Al—Bakr, the grey-haired man whose portrait had hung in all of my elementary school class rooms, was stepping down from Presidency in favor of his cousin, Vice President Saddam Hussain.

Aunt Lavla and my mother were in front seat talking about the news, which seemed to make them ecstatically happy. I think they were giggling.”(p.2)

The rest is history. The face of Iraq began to change from that very moment. Saddam knew whom to love and whom to kill, to secure his position politically. He carried out his plans ruthlessly eliminating at least 2.5 million people during his despotic regime.

And finally when he paid with his life, an innocent-looking rope was sufficient to take the life out of his, once most-admired body.

Her family was ‘lucky’ to be trapped within the inner circle of Saddam Hussein. Her father was a trusted pilot of his private airplane. Her mother managed the important aspect of house-keeping, arranging and supervision of important parties and get together of his trusted ones. She was just 11 years old when her father was the Pilot of Saddam Hussain’s private airplane. The family spent the week-ends with Saddam, but their every activity was carefully watched by Saddam’s detectives.

Her parents sent her to US so that she could be away from the uncertainties of Iraq. Her forced marriage ended in a tragedy and soon she shifted to Washington D.C. But she was the creator of her destiny not the victim. She founded an NGO, Women for Women International mainly to look after rehabilitation work related to the women from war torn countries. The story of her family, ipso facto, is the story of Iraq. How Saddam loved and hated his people at will, shocked her! How he proved to be a great manipulator, and how he made all the government agencies to work for his advantage. How he clipped the wings of the judiciary as well.

What was the status of woman/women in the book? How were they influenced by economic, political, and social forces? Be specific, give examples.

As for the status of women—women had no status at all in any areas, economic, political and social. Saddam’s atrocities did not spare women and children. The revenge and political killings of men folk in fact affected the women and the family. She wondered at the strange quality of this man, whom she knew since her childhood and she writes about him thus: “But not even he had enough bullets to kill twenty-five million people. How did he manage to dictate the way virtually every spoke, loved, married, prayed, played, smiled, learned, dressed, ate, deceived, despaired, celebrated, and died? Make decent people like my parents complicit in their own oppression?

Turn my mother from a free spirit into a premature matron who managed to fit in at palace parties? Keep me scared to death of him long after he had no power to hurt me?”(p.6.) What was Saddam Hussain’s disposition to women in general?

“What was known, but never spoken of, was that Amo and his inner circle, including his notorious son (Udday) routinely raped the gypsy women who were ordered to his palaces to entertain parties of men. He would ask his car to stop on a street corner and pick up any woman who caught his fancy, taking her back to his lair to have sex with her, willing or unwilling as she might be. He and Udday, were rapists. Saddam enjoyed humiliating his enemies by raping their wives.” (Article: Between  …)

Zainab Sabli would have been in great trouble, but for the courage and foresight of her mother. “Her mother eventually sent Zainab to America for an arranged marriage, to spare her from Saddam’s growing affection, but the marriage intended to save her turned out to be another world of tyranny and abuse.”(Powell’s….)

What did the main character in the book value the most? What was her motivation for life, ethic, passion, etc?

Her main contribution is for the cause of emancipation of women is her founding the NGO, Women for Women International. This humanitarian group helped women in the post-conflict areas such as Iraq, Kosovo, Bosnia, and Rwanda etc…

Did this main character accomplish what she wanted?

Yes, the main character Zanab Sabli achieved much success for the cause of reformation and rehabilitation of women in distress in war-torn countries “Zainab Salbi insists she didn’t want to write a memoir. She wanted to focus on the plight of women in war zones, those who’ve been raped, kidnapped, or tortured. But coauthor Laurie Becklund—along with Salbi’s own reflections on the courage of war-ravaged women worldwide—changed her mind.

Readers and history are the better for that.”(Book….) “Zainab is a dynamic speaker whose work with women in post-conflict has inspired thousands of women to become involved with Women for Women International. Since she founded it in 1993, the non-profit organization has delivered $24 million in aid and micro credit loans to 55,000 women in war torn regions as they rebuild their lives.”(U.S……)

The theme—the lessons from the book—what Iraq needs?

The pages of recent history of Iraq daubed in bloodshed ask a crying question. How to make this country the Heaven on Planet Earth? The answer is simple and direct. Eyes full of understanding, heart full of love and life that refuses conflicts—enough, these alone are enough!

“Brutal force has not won anything durable,” were the words of Adolph Hitler hours before he died. Absolute power corrupted Saddam Hussain absolutely. The curse of the women he abused is sufficient for taking him to the gallows a hundred times. Pronouncing the name of God is not going to change any individual. The grim and silent tragedy that engulfed the people of Iraq is partly due to their own fault. Blind loyalty and exaggerated demonstrations of love will lead the leader and the followers to doom. That this young woman initiated a fight against the tyranny firstly through her NGO and later through various lecture programs and visits to various countries, speaks of her immense courage.

The book has covered the social, cultural and political impact on Iraq, since the day Saddam took over and the revised last chapter discusses the aftermath when Saddam was no more in power. The books has eleven chapters, the Abbasid Coin, Strings, After Pig’s Island, The Pilot’s Daughter, Learning to cry with Ducks, Boxes, A white Horse, Collateral Damage, Becoming Zainab, Setting me Free and The Middle Path, cover every aspect of issues related to the rise and fall of Saddam Hussain. She was just 23 when she founded the NGO, Women for Women International.

Article: Between Two Worlds: Escape From Tyranny: Growing Up in the Shadow.

Book Review: Between Two Worlds: Escape From Tyranny: Growing Up–

Between Two Worlds: Escape From Tyranny by Zainab Salbi. (2017, Mar 01). Retrieved from http://studymoose.com/between-two-worlds-escape-from-tyranny-by-zainab-salbi-essay 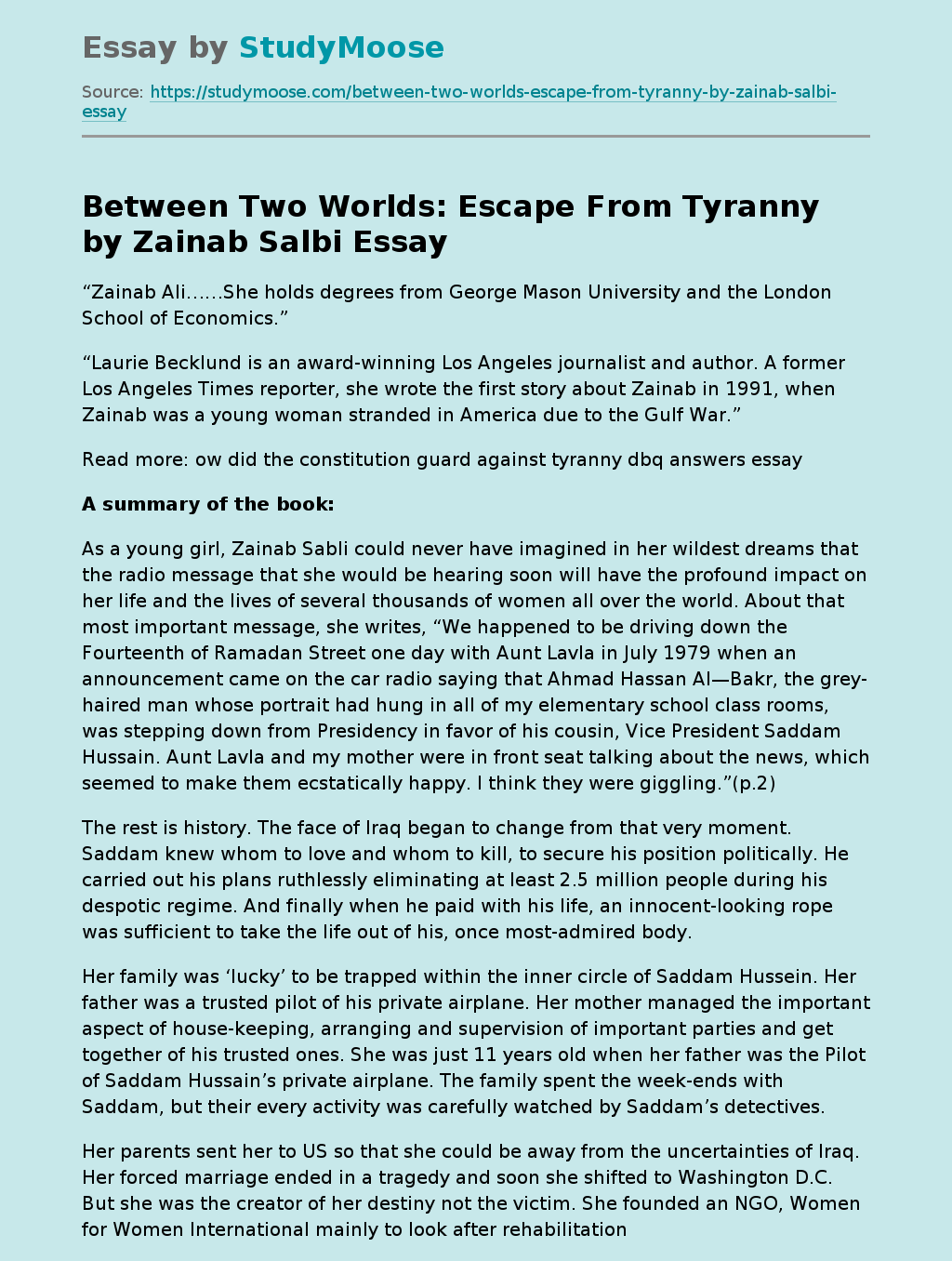