"Escape from the Western Diet"

In Michael Pollan’s essay “Escape from the Western Diet,” he informs Americans about the western diet and believes they need to escape from it. The reason Americans should escape the western diet is to avoid the harmful effects associated with it such as “western diseases” (Pollan, 434). To support his view on the issue, Pollan describes factors of the western diet that dictate what Americans believe they should eat. These factors include scientists with their theories of nutritionism, the food industry supporting the theories by making products, and the health industry making medication to support those same theories.

Don't use plagiarized sources. Get your custom essay on
“ “Escape from the Western Diet” ”
Get custom paper
NEW! smart matching with writer

Overall, Pollan feels that in order to escape this diet, people need to get the idea of it out of their heads. In turn he provides his own rules for escaping the western diet as well as the idea of nutritionism set forth by scientists.

Pollan explains that scientific theories of nutritionism focus on individual nutrients rather than foods as a whole (Pollan, 434).

Proficient in: A Healthy Diet

In Pollan’s view, “scientists can argue all they want about the mechanisms behind this phenomenon, but whichever it is, the solution would appear to remain very much the same: Stop eating a Western diet” (Pollan, 435). In other words, no matter what reason scientists have for the causes of western diseases, the common factor among them is the western diet, and that should be the basis for solution.

In addition to bringing to light these contradicting scientific theories, Pollan goes further to include how these theories benefit the food industry as well as the health industry. Pollan observes “for the medical community too scientific theories about diet nourish business… new theories beget new drugs… and new diets organized around each new theory’s elevation of one class of nutrient and demotion of another” (Pollan, 436). Basically, Pollan is informing that the health industry wants to profit off the theories declared by making drugs in regards to the nutrients cut down on. Similarly, Pollan notes the food industry comes out with a new line of products to match with the new theories made for the western diet. He reminds the reader to escape the western diet even though it will be hard because these industries only seek to profit rather than change the way people eat for the better (Pollan, 436).

To address what distinguishes the food of a western diet, Pollan compares whole foods and processed foods. He quotes Gyorgy Scrinis and concludes to himself “instead of worrying about nutrients, we should simply avoid any food that has been processed to such an extent that it is more the product of industry than nature (Pollan, 438). Pollan agrees with Scrinis for avoiding processed foods, but he complicates it by mentioning that all whole foods are taken over by industrial processes. Again Pollan reminds the reader that escaping the western diet will not be simple, yet he convinced it is possible and he offers his developed solutions for it (Pollan, 438). Pollan encourages Americans “eat food. Not too much. Mostly plants” (Pollan, 440). His three rules emphasize eating food that is in fact real food, eating in a manner that presents a positive culture, and eating plants which Pollan considers the best types of food a person can eat.

As Pollan argues against the scientific theories of nutritionism, he exposes what he considers their contradictions as well as the cycle of new theories creating new products creating new medicine. He informs the reader that these theories exist for these companies to make a profit rather than change the way people eat for the better (Pollan, 436). So again, Pollan reminds the reader to escape the western diet because it is the cause of western diseases. He offers his solutions on how to eat a better, more traditional diet.

"Escape from the Western Diet". (2016, May 08). Retrieved from http://studymoose.com/escape-from-the-western-diet-essay 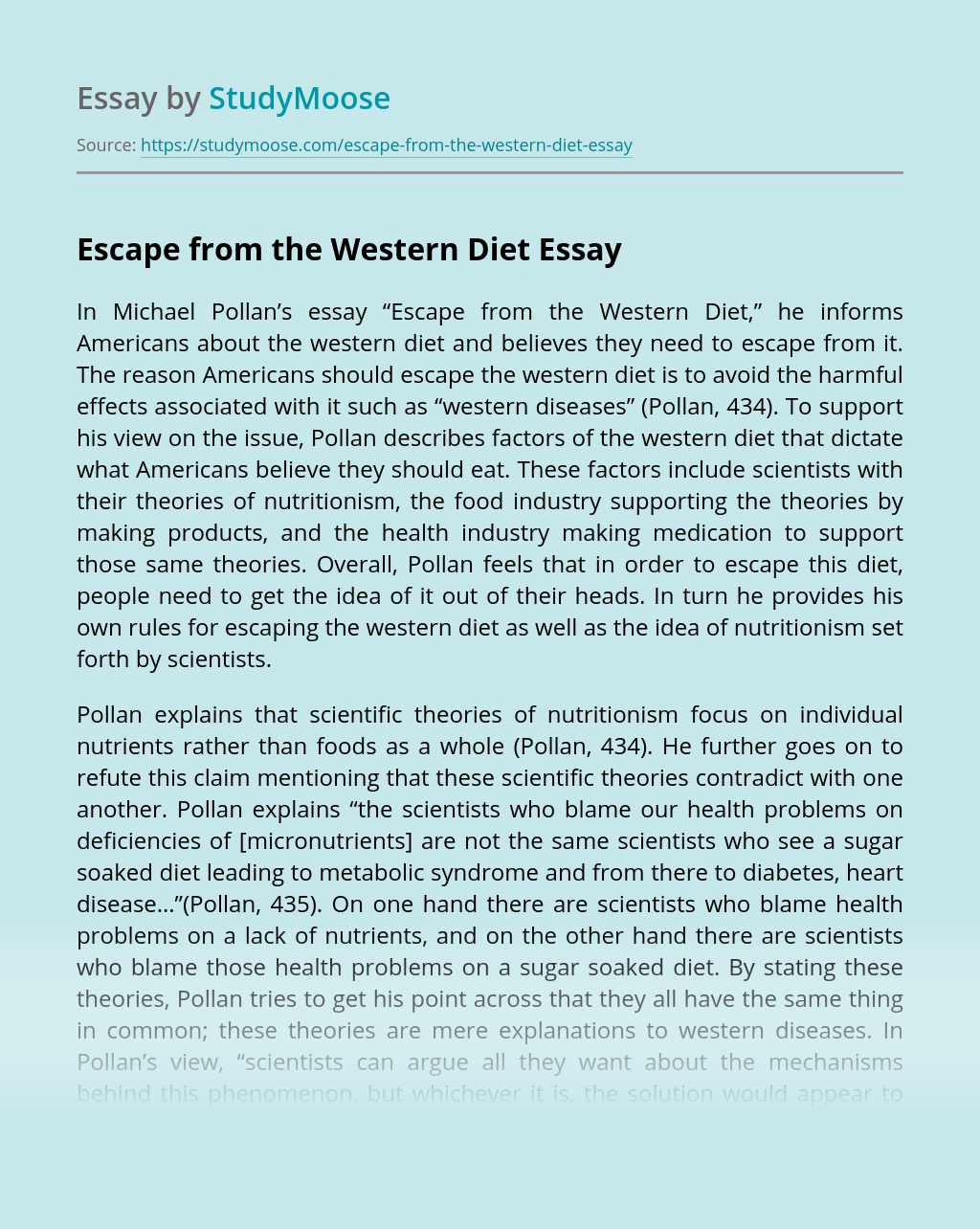