This is a true story. It is the story of our narrow escape from sudden death. My brother who is handicapped & myself went to Dadar in Mumbai to visit an Aunt. She lived very near the beach. I was just 15 then & my brother 5. We loved going to the beach but normally always went with our mother or elder sister. On our way back, temptation got the better of us & we came up with the great idea of walking along the beach instead of taking the taxi back home.

If we walked along the beach we could get onto the road at the Mahim Fort some distance away from Dadar, from where we could take a taxi to our home.

All this seemed fun. We were very excited. My brother totally agreed with my idea. However, we did not tell our aunt about all this, as she might refuse. She thought we were going to take a taxi back home. So off we ran to the beach, once our aunt closed the door. On the beach, we got playing on the sand, making little sand castles, collecting sea shells of all shapes & sizes & time & again dipped our legs in the water enjoying the waves that lashed against the shore. We wrote our names on the sand only to be erased by the coming waves. The tide was coming in but we were blissfully unaware of anything.

We enjoyed ourselves thoroughly. We had a great time. We drank coconut water, ate bhel puri & leisurely walked along in the sand.

My brother has a paralyzed right hand & walks with a limp. But nothing came in the way of his enjoyment on the beach that day. We splashed water on each other’s faces. I ran and he tried to catch me. We had so much fun. Time passes so quickly when one is happy. Our games continued. We never knew when afternoon turned to evening. It was beginning to get dark now and it was then that we decided to move on. Engrossed in play we had forgotten to look around.

We moved ahead slowly, not noticing the tide. We walked on crossing the rocks and boulders. As we moved ahead, at one point, we were shocked to see that we could not go any further as the waters had covered the place ahead. The tide had come suddenly. Gripped with fear we turned back. But to our astonishment the waters behind us had also touched the shore. Now we were left on a small dry patch of land & were surrounded by water on all sides. We could not move forward, nor go back. There was nowhere to go. Now we realized that we had landed ourselves in a great danger.

We could see the Mahim Fort some distance away; the waves lashing against it. That was the place from where we had planned to exit. We stood there confused, afraid and shocked. Alas, we found there was no way out. It seemed our mind has stopped working. We were terrified. In desperation we looked around for some way out. Our only hope was a tall wall that was before us & there were huge boulders near the wall. But how could we climb the wall ? It was dark & no one in sight. The water level was increasing and threatening to cover this place too. Everything was happening so fast.

We had very little time left with us. My younger brother was frightened and started crying. I tried to console him, but I myself was also much terrified. What next ? It seemed like an impossible situation. Escape seemed more & more difficult. Only God could save us. So we began praying desperately for God to work a miracle & send His angels to save us. I started cursing myself for not being careful. Due to my folly, we had landed in such a terrible situation. We called for help with the hope that someone would be around that high wall. The water came & brushed our feet pulling us backward into the sea.

Would we have a watery grave ? The sea which looked so pleasant and beautiful in the day now looked wild and dangerous, eager to devour us. I thought, what will happen to my parents and sister? They will be devastated. Probably, nobody would know about us or find us. But I restrained my thoughts and decided that I must do something. With great effort, I managed to get my brother onto a huge boulder. He was safe, at least for the time being. The water was now rising. It had reached a little above my knees & I clung onto a boulder for dear life. We were shivering with fear, but we did not give up.

We shouted for help, but it appeared there was no one to help us. I decided to get my brother across the wall by myself. I picked him up and made a desperate attempt to get him across the wall, but in the process we slipped and he barely managed to prevent the fall from the boulder into the surging water. His legs got a bit hurt and he cried in agony and pain and fear. I realized that on our own, we can never cross that big wall. Now only help from outside could save us, and there seemed to be none. The ever rising water level was making us frightened more and more. In our desperation, we shouted in a chorus for help.

Then miracle happened. Suddenly, we saw two men looking from over the wall. They seemed very scary, rugged, rough & tough guys. But I knew that this was help sent from God in answer to our desperate prayers. They were also shocked to see us in that condition. I pleaded with them for help & they were astonished to see us out there almost drowning. At first, they stood there hesitated. They knew that it was dangerous and they had to risk their own lives to help us. But then they decided to come to our aid. It was not an easy task. Time was running out for us. We were drowning but God was with us.

The men came down the wall slowly and carefully & along the boulders. One mis-step and they would fall into the water. But, they moved very carefully and finally succeeded in getting hold of my brother & carried him to safety over the wall. I felt a sense of relief & gratitude. I felt tremendous joy to see that my brother was safe and across that wall. For a moment, I forgot that my own life was still in danger. Now I made every conscious effort to climb the boulders. The men were strong and they pulled me up. With their help, I got over the wall. I got some bruises in my hands and legs, but who cares, since we were alive and safe.

Once up, they screamed at us for being so careless & warned us never to do this again. We had learnt our lesson. Overwhelmed with gratitude we thanked the men for their timely help & also tried to give them some money. But they refused to accept that. They too were happy that they were able to save us. They had taken a risk to come down the high wall & walk over those boulders which could have given way & caused some more trouble. Those two men, appeared to be rough guys, but for us, they were like angels, who came as if from nowhere, and saved us from a certain death. They were kind and risked their own lives to save us.

The men then stopped a taxi for us. We thanked them once again and hoped to meet them sometimes. We got into the taxi and reached home. Scared & terrified by what we had just experienced we looked like old turkey buzzards. We were wet and bruised, and heaved sigh of relief that we had reached home safely. We narrated all the events to our parents. They were speechless and could not believe what we said. At first they were angry & upset and scolded us for our carelessness, but also happy to see us safe. My mother cried and hugged us and made us promise never to repeat this mistake ever again.

We praised & thanked God together for saving our lives. It felt so nice to be back to safety in our home with our parents. All this seemed like a miracle. We could not believe that we had been through a near catastrophe. It was indeed a very narrow escape. This is a lesson for all children who venture on the beach to be alert & watch the tide coming in & come back to safety in good time. Luck may not always be on our side. Rather one should be careful and avoid taking unnecessary risks. Life is precious and one should not waste it by sheer negligence. We got our lesson that day. 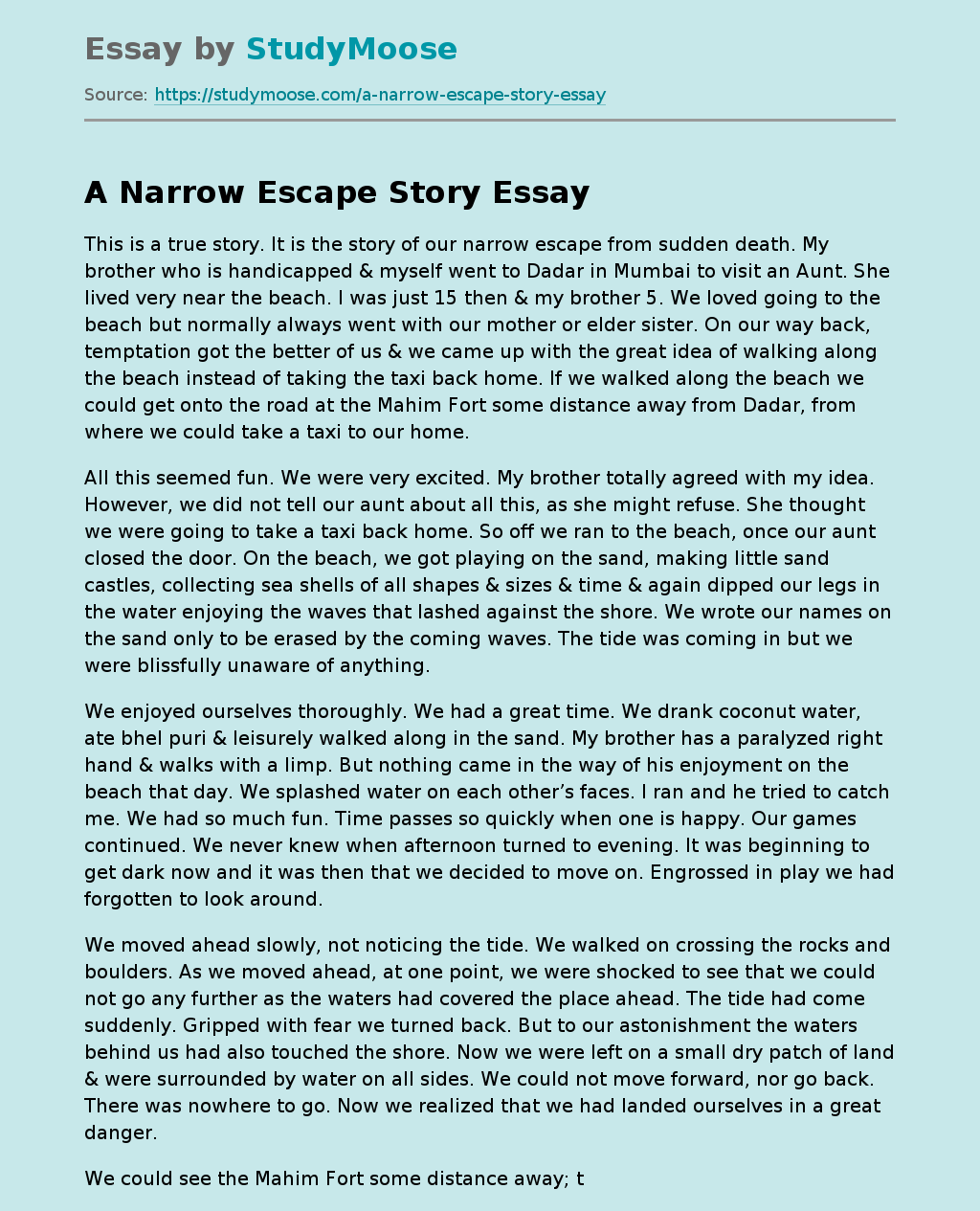