“The Kite Runner shows that we can never escape our past. Discuss”

In ‘The Kite Runner’ by Khaled Hosseini, we are shown through the characters of Amir, Soraya and Sohrab that we cannot necessarily escape our past but we can confront our past mistakes, forgive ourselves and others and move on with out lives. Amir struggles for self-forgiveness and therefore feels like he cannot escape the guilt and shame of past mistakes. On the other hand, Soraya chooses to confront her behaviour and accept what happened.

Don't use plagiarized sources. Get your custom essay on
“ “The Kite Runner” Shows Us That We Can Never Escape Our Past ”
Get custom paper
NEW! smart matching with writer

Lastly, Sohrab struggles to remember how happy he was before his parents were massacred and misses his old life terribly, in his case, he doesn’t want to escape his past but feels it is slipping away. Each character deals with their history and Hosseini shows that we cannot forget our past, so we must learn to live with it.

Amir struggles to deal with the guilt of his past mistakes. He cannot forgive himself and so he, therefore, cannot move on.

When Amir and Baba fled for America, Amir was carrying a lot of guilt with him; he failed to intervene when Hassan was assaulted in the alleyway and he framed Hassan with theft, ultimately ruining a forty-year relationship between Baba and Ali. For Amir, “America was different… Some place with no ghosts, no memories, and no sins.” He thought that America would be a place where he could forget about all his mistakes. However, he failed to forgive himself, as Baba would remind him of Hassan.

Given this inability to forgive himself he feels he needs to be physically punished by others to redeem himself. We are shown the strain of such guilt through the incident between Hassan and Amir at the pomegranate tree following Hassan’s rape. It is also demonstrated when Amir returns to Kabul to retrieve Sohrab and he is attacked by Assef, his childhood bully. He says, “My Body was broken… but I felt healed.” For Amir, returning to Kabul was a place to provide an opportunity for healing and forgiveness as after he was physically well again, he “told [his] wife everything… as [he] spoke [he] felt something lifting off [his] chest.” Amir’s actions show us that we cannot run from our past and that we must confront our past decisions and accept them as mistakes, if we hope to move forward uninhibited.

Before Amir and Soraya marry, Soraya tells Amir that she has been with another man. She confronts her past behaviour which allows her to move on with her life. When Soraya was eighteen year old, she ran away with an Afghani man. She confesses this mistake to Amir before they agree to marry. This allowed for a clean slate on her behalf. Amir says, “I envied her. Her secret was out… Dealt with.” By doing so, Soraya is not necessarily escaping her past as such but accepting it as a mistake to allow her to start her new life with Amir. Hosseini may have introduced this to show the difference between Amir’s choice to try and forget rather than admitting to his mistakes and forgiving himself. Soraya knew that she had made the wrong decision and was grateful towards her father for helping her realise that but admitting her history and not escaping it allowed her to start her new married life with Amir without the heavy burden of shame and dishonor.

Sohrab, on the other hand, faces many difficulties, including his sexual exploitation and the murder of his parents. He struggles to face reality as he misses his family. In a way, Sohrab doesn’t want to escape his past but feels as though it is slipping from him. After Amir rescues Sohrab from the Taliban, he slowly begins to open up to Amir about his past. He tells Amir that he misses his parents but is beginning “to forget their faces.” Sohrab struggles with the thoughts that he has to let go of his happier childhood and so attempts to kill himself in order to be with his parents and escape all of the terrible things that happened to him. When he is in the hospital recovering he tells Amir that he is “tired of everything” and says, “I want my old life back.” In Sohrab’s case he does not want to go back to his former life where he was happier and was with his mother and father. Sohrab moves to America with Amir and Soraya and he is given the opportunity to have a better life but not necessarily move on without regret. Even though he has been through many hardships, he is given the chance at a new life in a different country. This fresh start allows Sohrab to, once again, be happy. Sohrab will never forget his parents and he, therefore, will never forget his past.

Khaled Hosseini shows us through the characters in The Kite Runner that we cannot necessarily escape our past but we can confront our past mistakes and move on with our lives. Amir was conflicted and could not confront his past mistakes and therefore could not move on. On the other hand, Soraya admitted to her previous faults and it allows her to move on. And lastly, Sohrab struggles to remember his parents and does not want to escape his past but feels as though it is slipping from him.

"The Kite Runner" Shows Us That We Can Never Escape Our Past. (2016, Mar 20). Retrieved from https://studymoose.com/the-kite-runner-shows-us-that-we-can-never-escape-our-past-discuss-essay 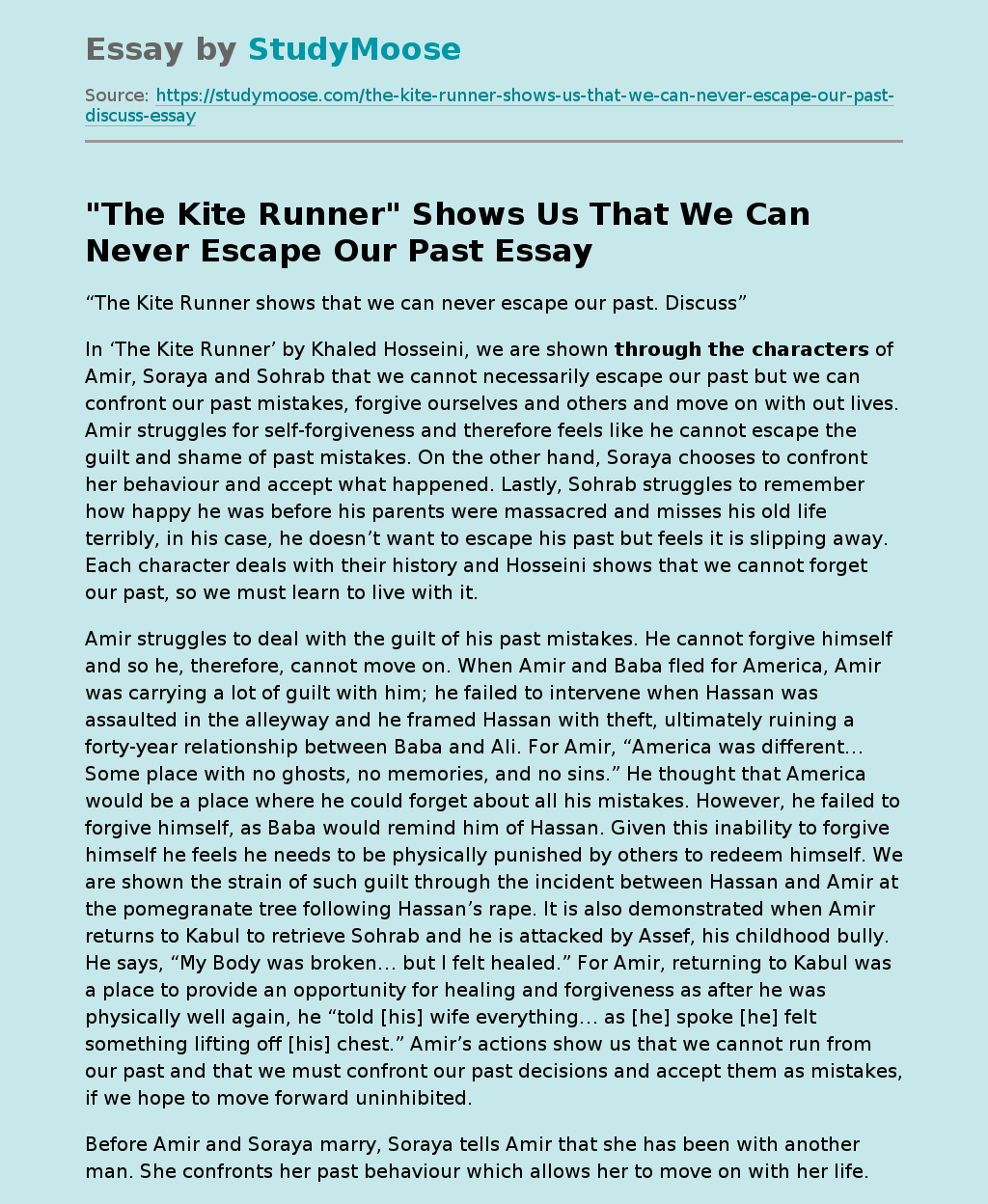