The works “Barn Burning” by William Faulkner and “The Chrysanthemums” by John Steinbeck at first glance may seem to have no connection, but in spite of different plot they focus on similar ideas.

The story “Barn Burning” by William Faulkner discusses the inner conflict within Sartoris Snopes, a young boy who faced a dilemma. He tries to make a decision of choosing between to lieing in the court under his father’s pressiure who does not want to get into the jail and acting against his father by telling the truth.

Don’t waste time
Get a verified expert to help you with Internal Conflict in Barn Burning by William Faulkner
Hire verified expert
$35.80 for a 2-page paper

The main character is influenced by Abner, his father, who tells him, “You got to learn to stick to your own blood or you ain’t going to have any blood to stick to you.” ( P 496). I think this quote reflects the main issue of the story, which is about blood ties. And we clearly see how Sarty is affected by these blood ties. Faulkner depicts the inner conflict and dilemma that the main character faces.

We start to understand the moral dilemma of the main character from the beginning of the story. I think Faulkner make us think about the question: at what point should a person make a choice between what his parents and or family believes and his own values? The situation in which Sarty’s conflict is developeded is a trial. In this trial Sarty is asked, ” I reckon any boy named for Colonel Sartoris in this country can’t help but tell the truth, can they?” ( P 154).

The young boy, Sarty, somewhere deep in his heart has a feeling that he wants to act in a right way, but as he is oly 10 years old, I think it is hard for him to make firm decisions.

His feelings and thoughts are influnced by his father, who pressures him, trying to prevent himself from punishment in the court. We also understand that Abner makes his son struggle with himself by the way Sarty describes him. Abner does not speak much. We see this in the way he communicates with his family and other characters. He is a person with so much pride that he is ready to do anything to revenge those who do something wrong to him or try to own him, even if he has to break the law. The choice that a young boy has to make stands between his family and conscience.

When Sarty Snopes considers that he has to make a decision of choosing between blood, which is his duty to his family, and his own morality. Sarty’s father stesses the value of loyalty to the family. He states,thatif he does not stick to hi blood, he will not have any blood to stick to. Sarty tries to make himself believe this and even starts a fight with a boy for insulting his father.

At first Sarty wants to be a moral person. He is very very upset that he has to lie speaking to the judge, but he is still going to do that, knowing his father wants him to do so. As Sarty respected Abner for his values, he thought he could back up him. The boy believed his father was a brave man in the war, and that he wanted to send a warning beforehand with a slave so that no one was hurt.

The battle between listening to his own heart and deciding to follow his family is the hardest struggle of Sarty’s life. He understands that it is not correct to agree with his father’s suggestions, but he is not interested in disreputing his father by disagreeing with him. The author explains that if he was older he would “resist the world and try to change the course of its events” ( P 379). Sarty learns that he does not necessaruly need bulk in irder to refuse Abner; at first he defends his father, but finally his decided to listen to his heart, which wants to help those who were harmed by obstinate and dogmatic Abner.

Sarty warns the people in the big white house and goes down the road. Soon Sarty hears a a few shots, and he thinks that his father and brother are caught by the landlord and are shot by him. Regardless of what indeeed happened, he understands he can never return. The boy just continues to walk, and he does not look back. At this moment Sarty’s blood ties are broken, and he gets rid of the fear of his father’s wrath. The main character is free now. But his freedom requires paying some price. I think that the boy still feels some kind of blood tie, described by the author, and he made this choice with a lot of feelings on both sides of the issue.

Sarty still cares for his family in some sense, he still feels love towards his father, even though he understands that what his father’s deeds are wrong and he really had to stop them and cease to be a part of them. The fact that the boy is not able to come back home is not a question of his choice, I think he just canont go back. So, Sarty’s heart still suffers from some conflict that is not really resolved, even though the situation has really changed. As I have already discussed, at the beginning of the story Sarty feels a strong allegiance to his father, however, finally we learn that his views change radically.

The point of culmination is at the end of the story when Sarty has warned Major de Spain of Abner’s intentions to burn the barn. I think that the main character experiences the burst of emotions, running down de Spain’s drive and hearing Major’s horse galloping behind him. The resolution to the conflict comes when Abner and his elder son are shot. But the real solution happens at night after Abner’s death, when Sarty is sitting upon the crest of a hill thinking about his actions and future life.

Faulkner proves us that it is impossible to sruggle with one’s own heart . The moment when Sarty decided to choose morality over the blood pool and warned the de Spain’s revealed his true character. Though this meant the death of his father, Sarty didn’t regret of warning de Spain. Instead, it looked like the boy was trying to subsitute his memories of his father by some honorable, good person, who had strong convictions.

In his story “The Chrysanthemums” John Steinbeck also reveales the conflict of a human heart, which is connected with women’s unfulfilled needs and desires. The author stresses that as human beings we have to appreciate each other, otherwise eventually we will make our lives dark and tragic. The main character, Elisa Allen, is frustrated with her present life. She is plagued with no children and her husband is not able admire her romantically as a woman. The only thing that helps her to calm down is her flower garden where beautiful chrysanthemums grow. Steinbeck shows Elisa’s thoughts nad feelings about her inner self by depicting those chrysanthemums.

The story presents the idea that appreciation by the people who we love is an element of human existence. When Elisa was acknowledged by her husband, said, “maybe I could do it, too. I’ve a gift with things, all right. My mother had it. She could stick anything in the ground and make it grow” ( P 1261). At this moment the woman feels her husband’s appreciation for commenting on her wonderful flowers.

This idea of recognition is shown by John Steinbeck to demonstrate the need for a felling of acceptance. Feeling a strong need for acceptance, Elisa turns to a stranger and makes attempts to be appreciated. While Elisa talks to this stranger, their conversation connects to the realm of Elisa’s flowers. “Elisa’s eyes grew alert and eager. ‘She couldn’t have known much about chrysanthemums. You can raise them from a seed'” ( P 1264). This depicts Elisa’s happiness and passion, as she has an opportunity to be appreciated through her flowers again. By undestanding the value of Elisa’s flowers, the stranger really accepts the woman, as her flowers are in some sense the expression of herself.

They are everything Elisa possesses, being sometimes valued by her husband and also being valued by the stranger. “… her eyes shone. She tore off the battered hat and shook out her dark pretty hair” ( P 1264). In this quote we see that Elisa opens her heart up to the stranger. She “tore off” the hat to free herself from the work which was not appreciated, and revealed her real beauty to the stranger. By acting so, Elisa is prepared herself to get the gratitude from the stranger, the gratitude that she did not receive often from her husband. .

After the tinker departs, Elisa is looking forward to her evening with her husband. She hopes Henry will recognize her needs as a woman and provide her with the romance and passion which she desires. But this hope is quickly broken. The best best compliment on her appearance that Henry makes after she has changed is, “You look strong enough to break a calf over your knee, happy enough to eat it like a watermelon” ( P 393). This unflattering comment on her appearance does not do much for Elisa’s ego as a woman nor toward her feelings toward her husband. Elisa’s hope is finally destroyed, as she finds the flowers on the road.

The woman feels that her soul is completely emptied by the tinker’s thoughtless rejection of her feelings. Just like her husband, he has failed to value the qualities that make her unique as a woman. This symbolic act has vanished her hope. Elisa realizes that her life will not change. Henry will not fully appreciate or understand her femininity and sexuality. She has to l earn to be content with such unthoughtful husband and her awful marriage. She realizes that her devastation is really complete and leaves her “crying weakly-like an old woman” ( P 394).

The chrysanthemums stand for the symbol of Elisa’s role as a woman. At the beginning they symbolize her children, later they represent her femininity and sexuality. Elisa feels that her life destroyed her soul because she lacked children and romance in her marriage with Henry. Eventually, her husband fails to appreciate her feminine qualities and her emotional needs. The encounter with the tinker reawakens her sexuality and Elisa starts to hope that she still has a chance for a more exciting and romantic marriage. However, seeing the flowers on the road she realizes that there will not be any changes in her life. Finally, her soul is devastated by such a miserable and uhhappy life.

I think that in contrast to the inner conflict, which Faulkner’s Sarty experienced at the beginning of the strory and resolved at the end, Steinbeck’s Elisa faced different situation. She had some hopes that her life will go in the desirable way, but all her expectations failed.

In my opinion, in spite of the conflicts which different natures, both authors proved in their works that if human heart comes into the conflict with itself, it brings suffering. But I think that it is worth to suffer like Sarty for the sake of resolving the conflict; however, life turns into the tragedy, when the conflict, like in Elisa’s case, is the final of a person’s dreams and expectations. 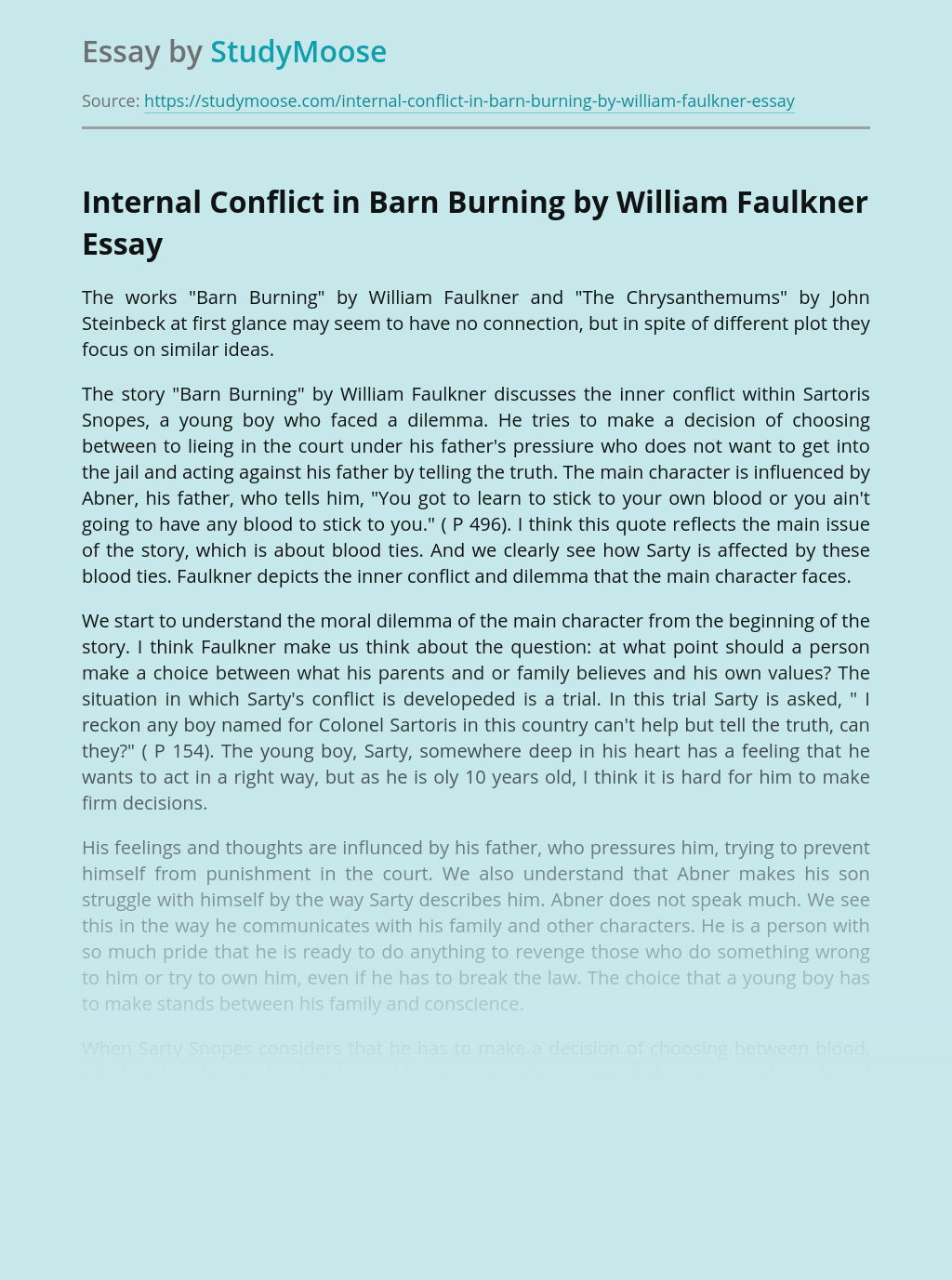 Don’t waste time
Get a verified expert to help you with Internal Conflict in Barn Burning by William Faulkner
Hire verified expert
$35.80 for a 2-page paper
Stay Safe, Stay Original