Internal Conflict in a Tale of Two Cities - Sydney Carton

Every novel in history has conflict. Without it, the plot is boring, and uninteresting. In the novel A Tale of Two Cities, a character that has conflict within himself is Sydney Carton. Sydney Carton takes a backseat to Mr. Stryver in the novel.

In reality, he is much more than that. He falls in love with Lucie Manette, but many others do as well. Sydney has to fight to win Lucie’s love, but there is still a chance that none of it will matter.

Don't use plagiarized sources. Get your custom essay on
“ Internal Conflict in a Tale of Two Cities – Sydney Carton ”
Get custom paper
NEW! smart matching with writer

Sydney Carton is the assistant to Mr. Stryver, an attorney. Also, Sydney is an alcoholic. Sydney has basically wasted his entire life, which he regrets. In the novel, Sydney falls in love with Lucie Manette. Lucie is a young lady who is desirable to many of the young men in the novel. Sydney doesn’t openly admit that he is attracted to Lucie at first. Eventually, Sydney admits to himself, and even to Lucie, that he loves her.

The only problem with Sydney being in love with Lucie is that she is sought-after by many men. The fact that Lucie is wanted by so many other people makes Lucie nearly impossible for Sydney to win over. The cause of the conflict with Sydney is that he loves Lucie, but many other men do as well. Not only is Sydney not good enough for her, but she has lots of choices. Sydney Carton is someone who is looked down upon by many of the characters in the novel. Sydney is an assistant to Mr. Stryver, another of Lucie’s suitors, Sydney is an alcoholic, and he regrets wasting his life and not making more of it. Nothing Sydney does now will change it, making it hard for him to win Lucie’s love. Also, Sydney has many people to compete with for Lucie’s love. Many of the men who want to win Sydney over have a better reputation than Sydney. Together, these create a big problem for Sydney in his quest to win the love of Lucie Manette.

Although Sydney could have resolved the problem of not being good enough for her by completely changing who he was earlier on, there is no way he could have gone back and changed how he acted in the past. Sydney is a bright person, and he is much brighter that his boss, Mr. Stryver. Sydney is a lot smarter than Mr. Stryver, and basically does all of Mr. Stryver’s work for him. Sydney needs to step up and show Lucie who he truly is. He needs to show her that he is smart, and that he is worthy of her.

If Lucie had known who Sydney Carton truly was from the beginning, her thoughts and feelings about him would most likely have been a lot different. If he really wanted to win Lucie over, Sydney should have broken away from Mr. Stryver, shown Lucie who he truly is, and swept her off her feet. Sydney Carton falls in love with Lucie Manette. Lucie does not love Sydney back, and not being good enough for Lucie creates much internal conflict for Sydney. If he had become a better person earlier on in his life, he might have a chance with her. Sydney is not happy with himself for wasting his life and messing up his chances of pleasing Lucie. 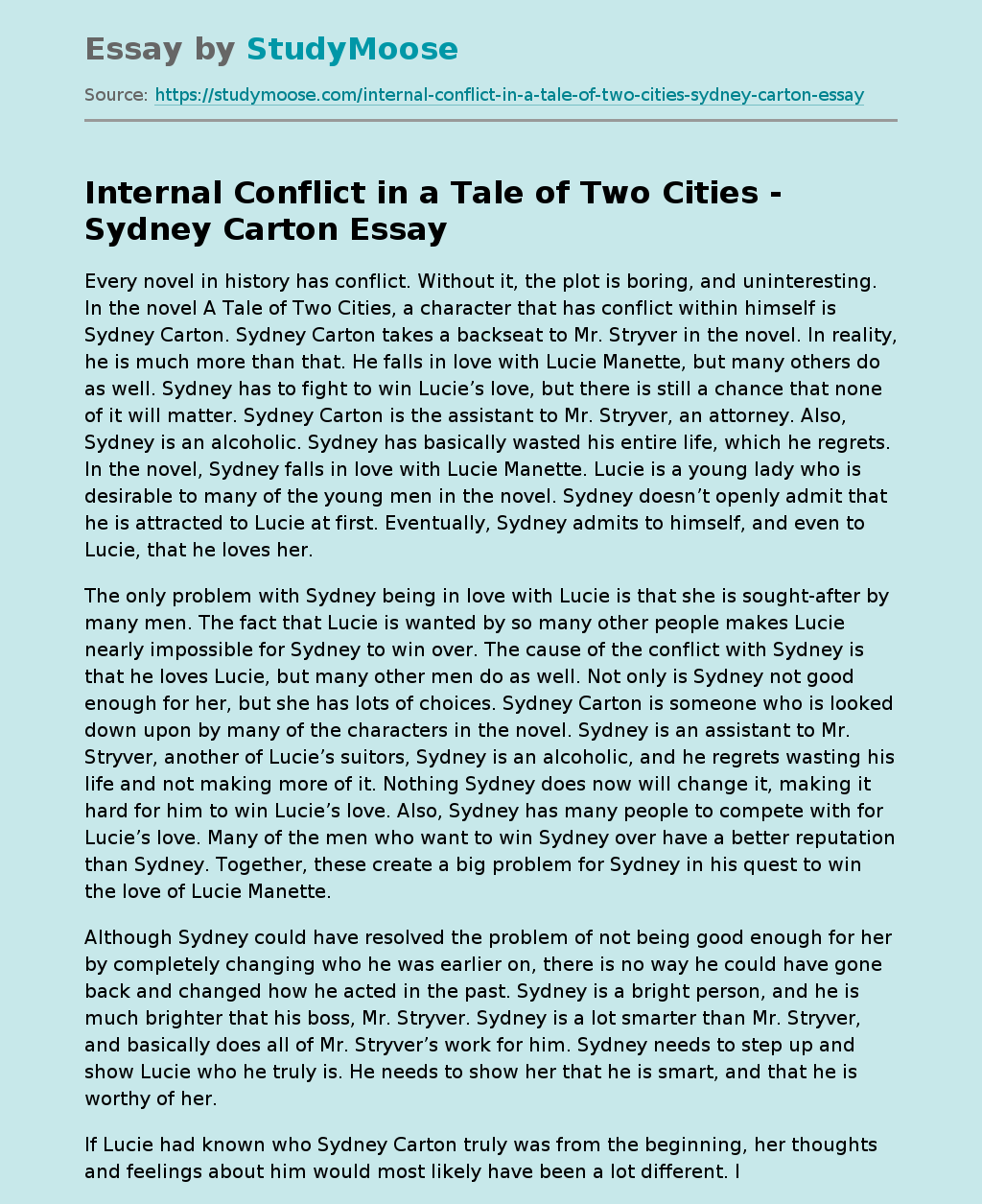