Charles Dickens’ novel, A Tale of Two Cites, is a very rich text. The characters, plot, and writing style are all complex and multifaceted. However, one of the least studied and important part of this novel is the chapter titles and even the proposed novel titles. These titles reveal and expose more about the text, like symbolism and irony that would have otherwise been missed. Dickens’ chapter and proposed novel titles are instrumental in revealing symbolism and irony in the book.

Don't use plagiarized sources. Get your custom essay on
“ Charles Dickens’ “A Tale of Two Cities” ”
Get custom paper
NEW! smart matching with writer

Dickens’ chapter titles reveal underlying symbolism in the novel. One of most symbolic of all the chapter titles is that of Book II, chapter five: “The Jackal.” The “jackal” is the nickname given to Sydney Carton, and it holds a great symbolic meaning. The jackal is a loner, a scavenger, a low-life in the hierarchy. Yet, the jackal is an incredibly adept at what it does; it is an excellent scavenger and hunter. Carton fits the chapter title perfectly. When we first see Carton, he is in the courtroom staring idly at the ceiling.

He is unattached, just as he is later unattached from the Revolution and the rift between the Manettes and the Defarges, his manner in court is said to be “so careless as to be almost insolent.” Carton is continually a man set apart, just like the lonesome jackal. Carton, it must be noted, is one of the only main characters to not have a connection with the Revolution in some way.

The ‘jackal’ and chapter title are a direct double of the ‘lion’, or Mr.

Stryver. Stryver, though he lacks “that faculty of extracting the essence from a heap of statements”, is a highly successful man. Dickens notes that “easy and strong custom” is what prevents the “thought of emerging from the state of the lion’s jackal.” A second chapter title that exhibits symbolism is that of Book II, chapter fifteen: “Knitting.” In a literal sense, Madam Defarge knits a registry of those marked to be killed in the revolution. When one of the Jacques questions the registry of stitches, M. Defarge assures him that “it will always be as plain to her as the sun.” At this point in the novel, it is clear that Madame Defarge possesses an anger and fury that knows no boundary. The knitting symbolizes the Defarge’s and the entirety of the Revolution’s hatred of aristocracy.

Dickens tells the reader that the “fingers of the knitting women were vicious.” Additionally, we are also told that “if the bony fingers had been still, the stomachs would have more famine-pinched.” Thus, Dickens turns a casual and seemingly harmless pastime into a sinister and menacing symbol of hatred. Dickens turns this chapter title into a recurring symbol in Book III, chapter fourteen: “The Knitting Done,” in which Darnay is waiting to die, and Madame Defarge herself is killed by Mrs. Pross, bringing an end to her knitting. A third and final symbolic chapter title is that of Book III, chapter three: “The Shadow.” The symbol presented by this chapter title is somewhat similar to the ‘knitting’ symbol.

However, while ‘knitting’ represent the hatred of French aristocracy, the ‘shadow’ represents the power that Madame Defarge and the revolution wield. When, Madame Defarge visits Lucie, the shadow she casts upon her and her child is said to be “so threatening and dark” that Lucie “instinctively kneeled on the ground beside her, and held her to her breast.” For Dickens, the shadow is the fierceness and the inescapable momentum that the revolution has. Hence, Madame Defarge, in the same chapter, mocks Lucie by asking if “the trouble of one wife and mother would be much to us now?” Dickens’ chapter titles exude symbolism.

Dickens’ chapter titles are also very ironic. In Book II, chapter four: “Congratulatory,” Darnay has just won his treason case. Doctor Manatte, Lucie, Lorry, and Stryver all congratulate Darnay on the successful trial. After the group disperses, Carton invites Darnay, his look-alike, for a drink at the bar. At the bar, Carton asks Darnay if Darnay thinks that Carton likes him. When Darnay is unsure, Carton tells him: “I don’t think I do.” It is ironic that the title of the chapter is “Congratulatory”, yet Carton spends a large part of the chapter expelling the reasons why he doesn’t like Darnay, revealing Dicken’s ironic humor. In Book II, chapter twelve: “The Fellow of No Delicacy,” Stryver tries to win Lucie’s hand in marriage. This chapter is ironic because Stryver has no delicacy at all, contrary to what the chapter title might have you thinking.

The chapter reveals that Stryver is arrogant and dimwitted. Stryver decides to marry to place a “magnanimous bestowal of good fortune” upon Lucie, revealing his arrogant ways. Later, Stryver, speaking to Lorry, says “the young lady at present in question is a mincing fool,” insulting Lucie. Simply put, Stryver has no delicacy at all, illuminating Dickens’ tongue in cheek humor. A third and final chapter title that exhibits irony is the Book II, chapter 14: “The Honest Tradesman.” This chapter centers on Jerry Cruncher and his activities as a self-labeled “Resurrection Man.” Obviously, the irony is between the “honest tradesman” and Jerry’s midnight excursions in which he digs up buried bodies. Dickens’ chapter titles disclose a very ironic and satirical humor.

While Dickens’ chapter titles are very appealing to examine, his proposed titles for the novel are very interesting to study, as well. One such title was “Buried Alive.” This proposed title definitely carries symbolic value. Buried alive, or solitary confinement, is certainly one of the major themes in the novel. Dr. Manett spends eighteen years in solitary confinement, and Darnay spends four years imprisoned in the Bastille, too. Dickens gives a frightening account of being buried alive. As the Defarges enter the Bastille, the tumult comes to them “in a dull, subdued way,” the sky could only “by stooping low and looking up.” Perhaps Dickens’ near obsession with imprisonment could be due to the child labor he faced as he grew up, working in various factories to try to repay his father’s debt. A second proposed title was “Memory Carton.”

Memory plays a fascinating and symbolic role in this novel. When Dr. Manette learns Darnay’s true name, the memory sends him into shock once again. Reflecting on his nine-day, shoemaking fit: the doctor says, “Remembrance that was the first cause of the malady. Some intense associations of a most distressing nature were vividly recalled, I think.” Later on in the novel, memory plays a big role in Carton. The memory of his love for Lucie, his promise to “give my life to keep a life you love beside you,” causes him to make the ultimate sacrifice. Dickens’ proposed novel titles reveal are very symbolic.

Dickens’ chapter titles and proposed novel titles reveal many underlying parts of the novel. Both symbolism and ironic humor are concealed within his clever and witty titles. Dickens’ tongue in cheek humor might have derived from all the hardships that he faced in life, from the child labor to the divorces and family issues. Either way, he is a fascinating author, and A Tale of Two Cities is a great piece of literature. 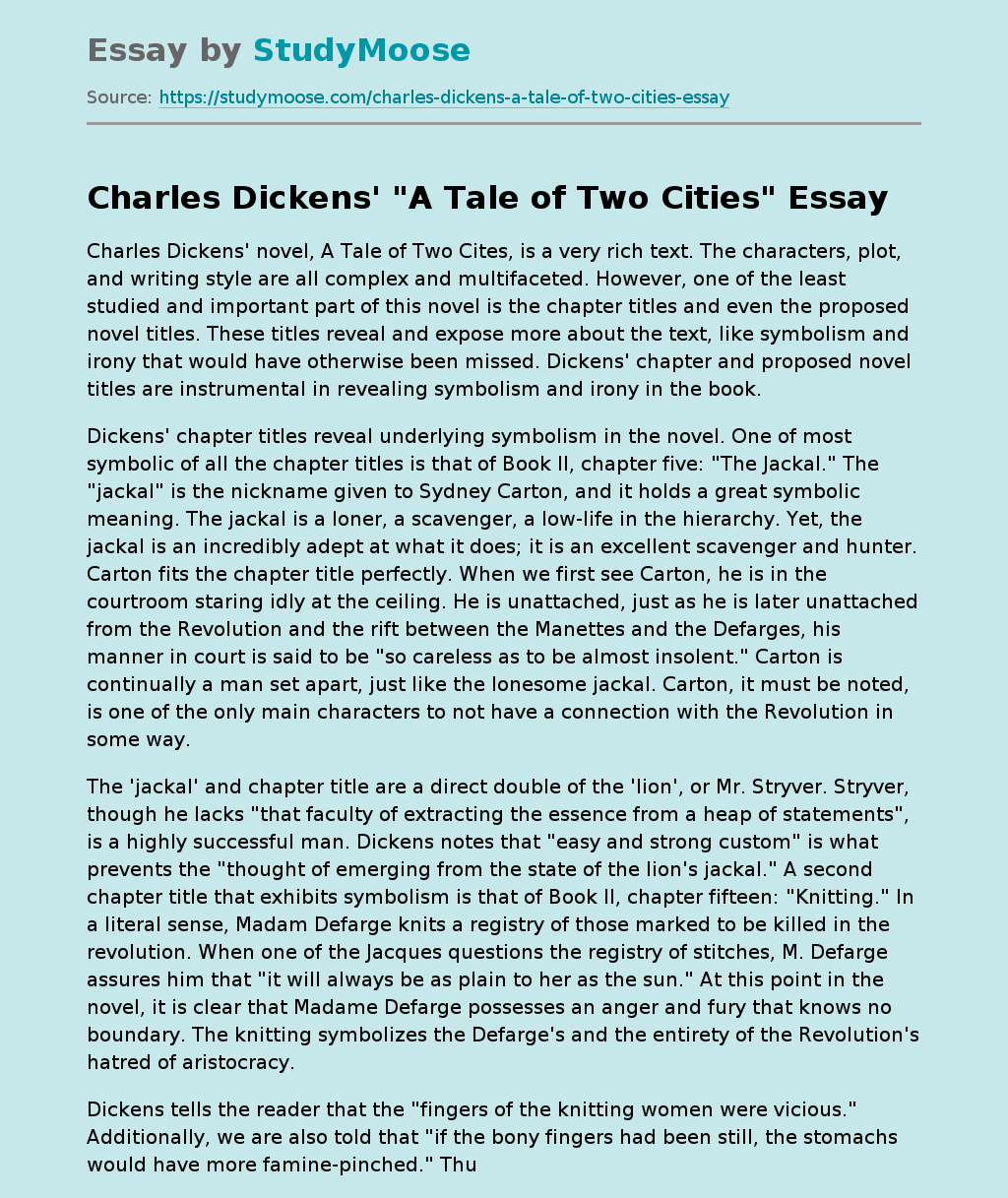