Have you ever looked at the West Elk mountains and seen the lamb in the side of Mt. Lamborn? The reason it is called that is because of the sandy slide that resembles a sheep much like the Cantabrian mountains of Spain resemble white elephants. “Hills Like White Elephants” (1927), written by Ernest Hemingway, is about a young, unmarried couple, the American and Jig, who are sitting at a train station in Spain, apprehensively discussing an abortion for Jig. The story starts with Jig looking at the surrounding hills and talking about different types of alcohol.

There is a following conversation between the two where they talk about their relationship post-abortion. There is not a definite conclusion to their discussion, and it is left up to the reader to infer. In “Hills Like White Elephants” Hemingway utilizes symbolization, characterization, and conflict to create a tense story between a young man and lady and give a clue as to whether or not the couple proceeds to get the abortion or not.

Hemingway uses dialogue to develop conflict to show that even without a lot of clues, the couple is still arguing about something.

The first example is when the woman suggests that the hills look like white elephants but the man says he’s never seen one. In response she remarks, “No, you wouldn’t have,” in a way that makes it sound as if she didn’t intend for her comment to be nice. Then, further into the story, the conversation dies down and the woman says, “They don’t really look like white elephants.

I just meant the colouring of their skin through the trees. ” By saying this the woman is almost scared of being wrong in the eyes of the man, so she submissively changes her own opinion to conform with his.

The woman creates a lot of the conflict but an example of the man doing this is when he keeps insisting on things until the girl is finally fed up and asks him, “Will you please … stop talking? ” This line is important because it shows the attitude and brashness of the man which is characterization, as I’ll talk about in my next paragraph. Characterization plays a prominent role in the story because the reader never gets to hear the thoughts of the characters, only their conversation and actions.

For instance, upon arriving in the train station, the woman instantly begins to look at her surroundings, looking off at the line of hills, and commenting on them. When she does this it is like Hemingway wants readers to see Jig as a person who is more aware of new ideas and possibilities . He makes the American the opposite, however. Whenever the girl begins to look off at at something, she is quickly brought back to reality because the American wants to talk about what he thinks is important. The American is also less tactful when talking about the abortion.

He constantly refers to it as an operation, “just to let the air in,” whereas Jig never even mentions it. With Jig never mentioning the operation because it is taboo and saying things like, “And if I do it you’ll be happy and things will be like they were and you’ll love me,” makes her seem inferior and dependent on the American (WriteWork Contributors). She sounds childish and thinks that the only way to be happy is to please the American man. Hemingway’s characterization creates two conflicting personalities that raises the tension and gives the reader a sense of actually sitting at a table near them, eavesdropping.

The most important element in “Hills Like White Elephants” is symbolization because there are a lot of ideas and words that don’t have the same impact as they do when there is a concrete object resembling it. One of the most important symbols in this story was the bead curtain that hangs and separates the kitchen from the dining area. The meaning behind the curtain is to separate one thing from another, like the American and Jig’s opinion on keeping the baby. Painted on the curtain is “Anis del Toro” which is booze of the bull (Shmoop Editorial Team). This alludes to how meaningful alcohol is in the story.

When Jig says, “That’s all we do, isn’t it – look at things and try new drinks,” it seems that they are frequent party-goers, and that may be how she got pregnant in the first place. Then they try the Anis del Toro and Jig comments, “Everything tastes of liquorice. Especially all the things you’ve waited so long for. ” Maybe after a few years of hard partying she realizes that it isn’t all that great and tastes of vile licorice. These two lines together make her think that settling down and making a family may be what she actually wants. Furthermore the very landscape that the story is set in is a symbol.

The narrator mentions, “On this side there was no shade and no trees and the station was between two lines of rails in the sun,” implying that the current situation was very barren and dry. But then later in the story, “The girl stood up and walked to the end of the station. Across, on the other side, were fields of grain and trees along the banks of the Ebro,” which portrays a very green, fertile landscape. Hemingway uses these two descriptions to symbolize and contrast Jig’s decision of whether or not she will carry out the abortion. Hemingway’s usage of symbols helps enrich the story.

“Hills Like White Elephants” had several important techniques such as conflict, characterization, and symbolization to make a dramatic story about a man and woman and their differences. After finishing the story, many readers are able to infer that they did not keep the baby. This is because the last line is Jig pleasing the man and denying that she is feeling anything but “fine. ” Geography can be simple landmarks, or it can be complex symbols for taboo topics. Works Cited Edwards, Fred. “Critical Analysis. ” House of Desmond. Web. 14 Feb. 2013. . Hemingway, Ernest . “Hills Like White Elephants. ” Anchorage School District. 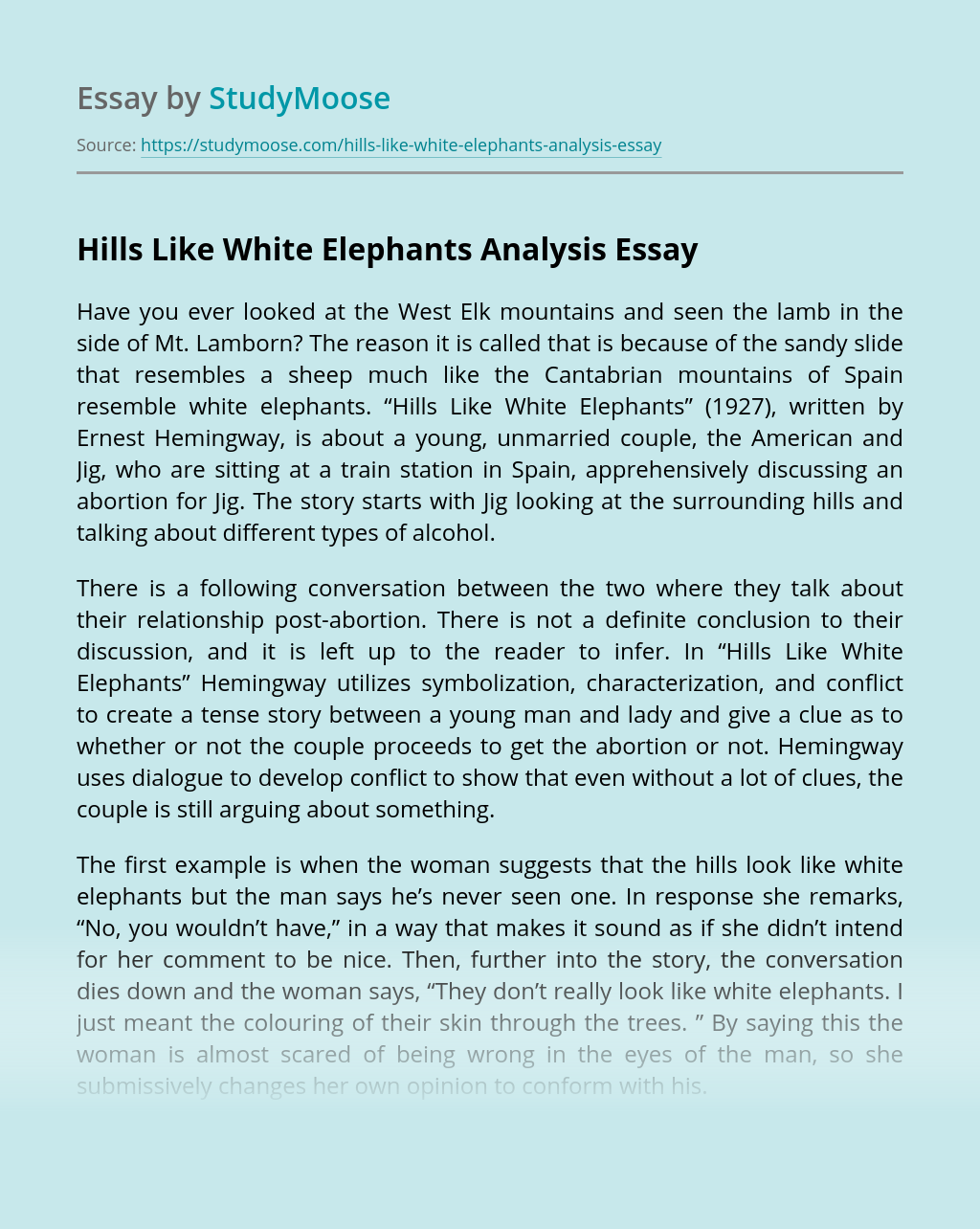 Trying to decide on a course of action when faced with an unexpected pregnancy, an American and a girl sit outside a train stop in the dusty part of Spain and drink on it. Indirectly approaching the sensitive subject of abortion, each member of the couplehood sets out to test the other in a verbal...

Hills Like White Elephants’ is one of the finest short stories written by Earnest Hemingway. It is also a perfect example of his minimalist style of narration. This story gives the readers ample scope to draw their own conclusions about what the characters are discussing. There is a man and a woman who are the...

Both “Hills like White Elephants” by Ernest Hemingway and William Faulkner’s “A Rose for Emily” center around two women who are repressed by their lives’ circumstances. However, outside of their feelings, their situations could not be more different. Miss Emily Grierson is trapped in a life of solitude, despondency, and desperation. The girl, or “Jig”,...

An Analysis Of ‘Hills Like White Elephants’ By Ernest Hemingway

‘Hills like White Elephants’ is a very clever story written by a journalist, turned ambulance driver, turned military, turned prose and fiction writer.  Ernest Hemingway was popular for his novels and short stories, but before he entertained his passion for the art of storytelling, he worked for the Kansas City Star as a reporter; he...

In ‘‘Hills Like White Elephants,’’ Ernest Hemingway reformulates and reassesses his own experiences in terms of male-female relationships and decisions about childbearing. The story bears clear marks of autobiographical inspiration, and Hemingway chose a rather odd time to write it: his honeymoon with his second wife Pauline. The author would marry four times in total...

To have courage is to do what you want without the care of what others will think. By that standard Earnest Hemingway is a very courageous man. During a time when abortion was such an unspoken taboo, Hemingway threw caution to the wind and wrote “Hills Like White Elephants”, a story about an American man...

A Clean, Well-lighted Place and Hills like White Elephants

Introduction             The two stories of Ernest Hemingway happened in a well kept café and an old bar where people spend time to unwind. Looking on both stories, it is tempting to create that the coffee shop could have been the old bar before and the old man may have been frequenting that place when...

“Hills like White Elephants” is a masterpiece of Hemingway’s short story. I benefit a lot after reading. Therefore, I want to make a discourse analysis of this short story from three dimensions, that is, dialogue, symbolism and the thinking space for the readers. The story unfolds through dialogue. Language use of the dialogue is concise...