Symbolism embodies an abstract idea or concept by using an object or character. In the parable, The Pearl, Steinbeck uses symbolism extensively to create and develop the novel’s themes. The pearl of the book’s title is a symbol, which develops from a paradise of hopes and dreams, to a destructive centre of evil. The key symbol of the pearl generates the theme of the destructive nature of greed throughout the book. The doctor as a symbol develops the theme of oppression.

Turn in your highest-quality paper
Get a qualified writer to help you with
“ The Pearl-John Steinbeck ”
Get high-quality paper
NEW! AI matching with writer

Steinbeck elaborates the theme of humanity in the natural world by changing the way he describes nature.

The theme of greed is elaborated through objects and characters such as the pearl, the doctor and the pearl dealers. The pearl, known as the “Pearl of the World”, is the focal symbol of the novel. The transformation from an innocent, idyllic heaven of wealth and perfection to a damaging force of darkness develops the theme of the destructive nature of greed.

This theme is prominent throughout the novel and arises as the materialistic world’s destructive influence takes effect on Kino’s simple life. By bringing out the evil and greed in men, the pearl, rather than a blessing forms into a curse. As the symbol of the pearl changes, the theme of greed surfaces, bringing out the evil in the men in the town, and even the evil in Kino himself. Kino is so consumed by and attached to the pearl he states,

As his greed intensifies, he becomes so obsessed with selling the pearl that he ultimately loses everything, his canoe, his original way of life and eventually his son. The realism and irony of all of Kino’s losses illustrates the damaging and profound impact of greed. The doctor and his treatment of the native community also motivate the themes of greed and oppression of the indigenous. In the parable, the doctor, even as wealthy as he is, refuses to help Coyotito because Kino could not pay him.

The theme of oppression is manifested by the doctor’s and pearl dealer’s treatment of the indigenous people. The doctor’s selfishness, arrogance and greed; portrays the arrogance of colonial superiority over the native society. He looks down upon Kino’s people and only looks for opportunities to exploit them for his own gain. The greed and oppression symbolized by the doctor is illustrated in the following passage,

“The doctor never came to the cluster of bush houses. Why should he, when he had more than he could do to take care of rich people who lived in the stone plaster houses of the town”

In his descriptions of the natural world Steinbeck uses symbolic language to elaborate the theme of humanity as a part of nature. In The Pearl, Kino is linked to the natural world. This world reflects and mirrors the changing perceptions of the human world. For example, the beautiful, idyllic innocence of Kino’s simple, traditional life, which he lives before he finds the pearl is depicted at the start of the novel as Kino awakens,

“…It was a morning like other mornings, yet perfect among mornings.”

In the darker end of the novel, Kino and Juana flee the town. As they do, the reader experiences the natural world’s harsher qualities. This is illustrated in chapter 6,

The pool represents both life and death, showing us that nature embodies not only good, but also harsher and darker elements, such as death. Kino’s fate as well, seems to be bonded with nature, in the opening chapter; there is a sense of foreboding with this passage,

“…Kino watched with the detachment of God while a dusty ant frantically tried to escape a sand trap an ant lion had dung for him”.

This creates a corresponding link between Kino and nature, and God and Kino. This portrays God as the ant lion, setting a trap (the pearl) for Kino (the dusty ant). There is another symbolic event as Coyotito is strung by a scorpion. This again is part of nature and symbolises evil (the scorpion) destroying innocence (Coyotito), which in the parable, repeats itself as Kino’s innocence and simple way of life is destroyed by his greed and ruthless materialistic desires.

Steinbeck is also able to link the themes of nature and greed in the following passage,

“On the beach hungry dogs and hungry pigs of the town searched endlessly for any dead fish or sea bird that might have floated in on a rising tide.”

The hunger of the dogs and pigs symbolises opportunistic greed in a natural setting. Their endless search for dead fish or sea bird represents greed which is eternal. The image of dogs and pigs ignorantly desiring rotten fish and seabirds helps the reader to move to a higher level and look down on the greedy characters that helplessly and foolishly desire the pearl.

Through clever use of symbolism, Steinbeck has written short passages, which elaborate the themes of greed, oppression and humanity in the natural world. Symbols are used to raise the reader’s awareness of the themes at a higher level than simply following the plot of the story. Symbols such as the pearl can carry many meanings for the different characters at different times in the novella. In The Pearl, Steinbeck has shown that he is a master of the use of symbols. 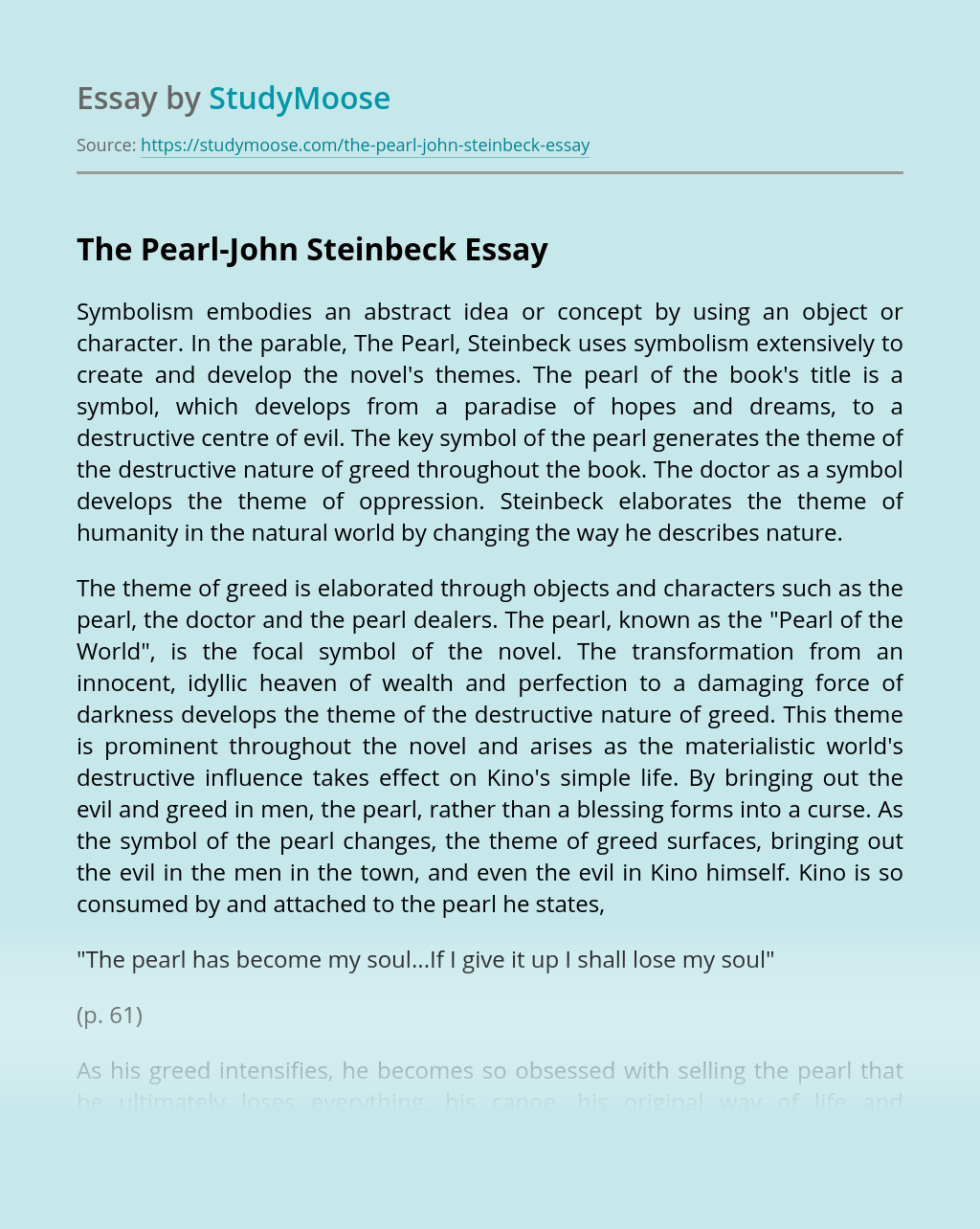 Turn in your highest-quality paper
Get a qualified writer to help you with
“ The Pearl-John Steinbeck ”
Get high-quality paper
Helping students since 2015
Stay Safe, Stay Original