Paper on Light vs Darkness In A Tale of Two Cities

Don't use plagiarized sources. Get your custom essay on
“ Paper on Light vs Darkness In A Tale of Two Cities ”
Get custom paper
NEW! smart matching with writer

” The story then progresses and introduces Dr. Mannette, who’s inner darkness was revealed through his surroundings, “The garret…was dim and dark…Such a scanty portion of light was admitted through these means, that it was difficult, on first coming in, to see anything; and long habit alone could have slowly formed in any one, the ability to do any work requiring nicety in such obscurity.

Yet, work of that kind was being done in the garret; for, with his back towards the door, and his face towards the window where the keeper of the wine-shop stood looking at him, a white-haired man sat on a low bench, stooping forward and very busy, making shoes.” Dr. Mannette was living in turmoil from the years of captivity he had been in, and he had gone into a state of madness.

Not only was his surroundings dark, but also the life he was living. However, through the light, which was his daughter, he was able to escape from his inner darkness, “with hands which at first had been only raised in frightened compassion, if not even to keep him off and shut out the sight of him, but which were now extending towards him, trembling with eagerness to lay the spectral face upon her warm young breast, and love it back to life and hope-so exactly was the expression repeated on her fair young face, that it looked as though it had passed like a moving light, from him to her.

” Dr. Mannette is not truly alive until he sees his daughter; the light that she brings penetrates his darkness and brings a new life into him. Darkness and light also helped to stage the setting and tone of the story. The time the novel was placed in was truly dark. Death and despair were rampant in France and darkness was an adequate adjective for the people’s lives, “Darkness closed around, and then came the ringing of church bells and the distant beating of the military drums in the Palace Courtyard, as the women sat knitting, knitting. Darkness encompassed them. Another darkness was closing in as surely, when the church bells, then ringing pleasantly in many an airy steeple over France, should be melted into thunder cannon” This was used to foreshadow terrible events to come; soon all of France would be engulfed in revolution.

Irony was also seen when light was used during a horrific event, “Along the Paris streets, the death-carts rumble, hollow and harsh. Six tumbrils carry the day’s wine to La Guillotine.” This scene was right before Carton was to be executed. Although this is one of the darkest parts of the story, it occurs in the light of day. Throughout A Tale of Two Cities light and darkness are contrasted and emphasized in regards to the setting and characters. From the opening sentence to Carton’s execution, light and darkness were prevalent in the novel. Although darkness seemed to outweigh the light, there was no grey area, only extremes. Darkness or light, bad or good, Dickens felt this period could only be described by these extremes and he showed them in his story.

Paper on Light vs Darkness In A Tale of Two Cities. (2016, Dec 13). Retrieved from http://studymoose.com/paper-on-light-vs-darkness-in-a-tale-of-two-cities-essay 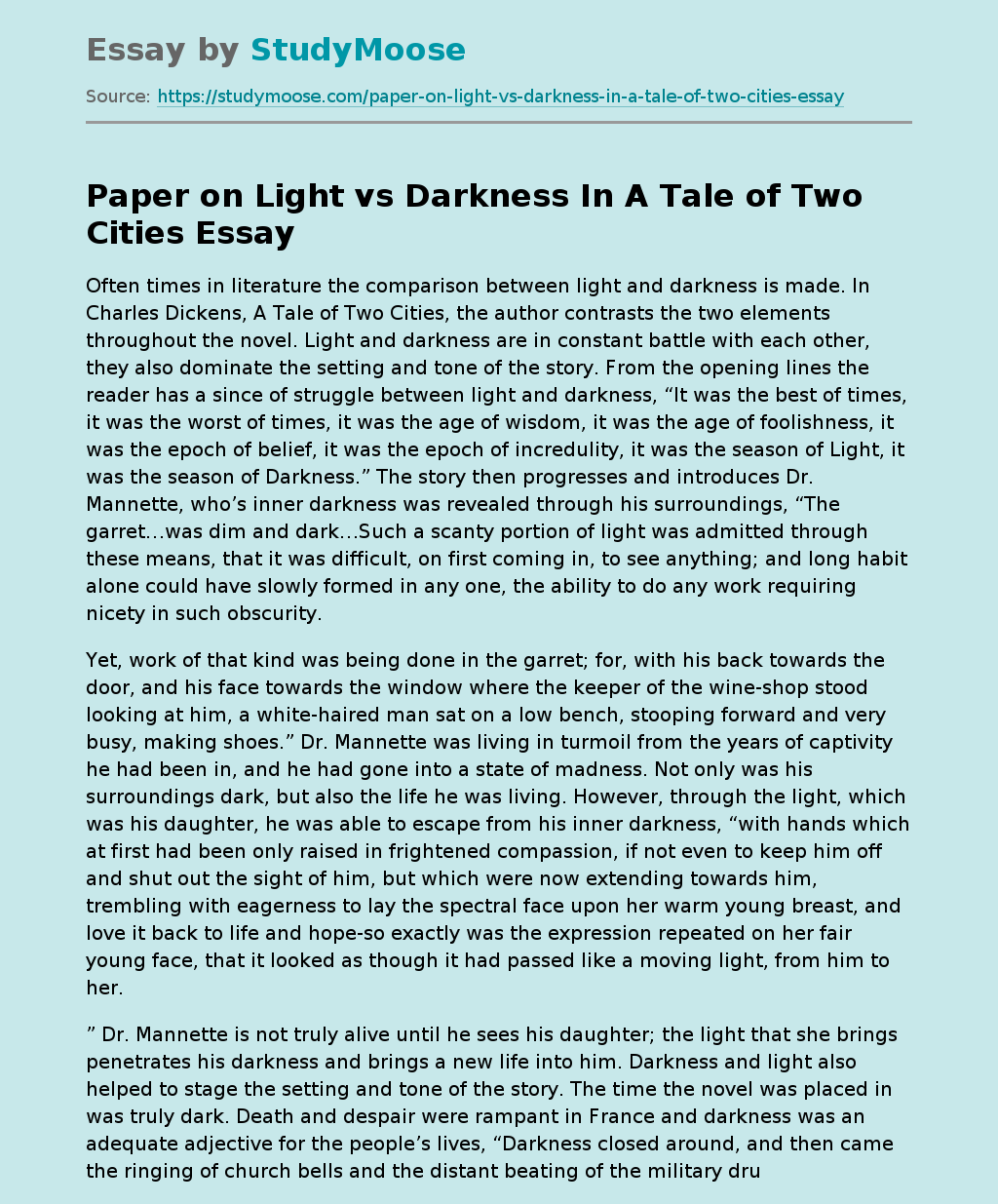