The Sound and the Fury by William Faulkner Review

Faulkner concentrates on the internal lives of his characters, their memories, and their stream of consciousness, to draw the reader into the specific world the characters create for themselves. Although Faulkner does not give Caddy a voice in the novel, by conjuring her presence through memories, her brothers revel the depth and destructiveness of her sexuality on the family. Caddy’s role in the novel is to disrupt the brothers’ narratives and challenge the underlying southern social and gender constructs that imbue them.

Don't use plagiarized sources. Get your custom essay on
“ The Sound and the Fury by William Faulkner Review ”
Get custom paper
NEW! smart matching with writer

Faulkner uses Caddy to demonstrate the effects of female sexuality on the Compson brother’s own sexuality.

In this manner, even after Caddy leaves the house, Miss Quentin remains a physical reminder of Caddy’s role in the family’s demise. Consequently, Caddy remains inevitably connected to all the characters and her presence helped define the rest of these characters themselves. However, the void of her own narrative demonstrates how women’s social existence was dependent on male acknowledgement.

But to the reader, Caddy remains an elusive mystery whose enforced silence prevents her from ever being known. To her three brothers, she is a source of obsession and irritation that cannot be forgotten or overcome. Faulkner places Caddy at the center of the novel to demonstrate that it remains impossible to avoid female sexuality, despite attempts to suppress it with Southern Values.

For Benjy, language becomes a literal expression of what he sees, hears, and remembers. However, these memories are selective and generally center on Caddy and her sexuality.

Accordingly, his cries of distress express a need that he cannot articulate or even understand, his desire for Caddy to remain pure and unchanged. “We watched the muddy bottom of her drawers,” (25). By describing Caddy’s underwear, Faulkner illustrates the lasting effects of this memory on the all three brothers, as this memory constantly returns as the emblem of her disobedience. Caddy’s dirty drawers foreshadow her future promiscuity and become a prefigure to menstruation, the stain of female sexuality in general. Benjy views Caddy as his protector and voice of authority, as she attempts to use language to communicate with him and provide him with the maternal care he lacks.

Therefore, “Caddy smelled like trees,'” (27). After Benjy sees her muddy drawers by the stream and cries, she crouched in the water and comforts him, incidentally washing away her sins in a symbolic baptism, and Benjy thinks she smells like trees again. Caddy’s virginity gives off a natural scent of purity. In this section, all of Benjy’s memories converge around Caddy and her sexuality, demonstrating that Benjy cannot escape the effects of Caddy’s sexuality even though he is mentally handicap and Caddy has moved away. Faulkner uses Benjy’s sensory images to demonstrate that Caddy regains her innocence when she washes herself with water, a symbol of femininity and purity. This mirrors the emphasis placed on her chastity in Southern Culture, since women were viewed as symbols of enduring morality. Benjy only remembers Caddy as a child, when she was a virgin. After she loses her virginity, she is no longer able to wash away her sins. Although Caddy acts as a maternal figure to Benjy, he cannot forgive her for her sins as her memory still haunts him, resulting in his present cries.

However, instead of replaying and idolizing memories of Caddy when she was still unsoiled, as Benjy does, Quentin’s memories of Caddy are almost solely of her after she has had sex, which he associates with the redolence of honeysuckle. The scent is also linked in his mind with the trees in the woods where she meet her lovers, and with death: “all cedars cam to have that vivid dead smell of perfume that Benjy hated so much.” In this manner, Quentin becomes obsessed with Caddy’s sexuality and he cannot even escape her memory at Harvard. What Quentin finds most appealing about Caddy’s sexuality is that it is an antithesis of the behavior expected of a traditional woman. His mixture of yearning, fascination, and abhorrence for Caddy is an expression of his distorted sense of his own masculinity and sexual desire. “In the South you are ashamed of being a virgin. Boys. Men. They lie about it. Because it means less to women…He said it was men invented virginity not women,” (50).

In the South, double standards exist for men and women in the realm of sexuality. Women are supposed to be pure and conservative, while men are allowed to engage in sexual activities. However, the portrayal of Caddy’s assertiveness and Quentin’s effeteness scrutinizes the assumption of determined gender roles. Faulkner mocks Quentin’s sexuality when he says, “I have committed incest I said Father it was I it was not Dalton Ames,” (51). Quentin’s psyche is damaged as he fails to become the heroic southern gentleman and defender of female virtue in relation to Caddy. Quentin remains jealous that Caddy lost her virginity first, and as a result he retains a distorted idea of sexuality. Consequently, Quentin goes away to Harvard, but he has not escaped the effects of Caddy’s promiscuity as she penetrates his memories and personal flow of consciousness. He is forced to drown himself to find a true escape, but he is still killed by a female force, highlighting his inability to escape female sexuality.

In contrast, Jason’s narrative is the only view of Caddy as a mother. His investment in the Southern categorization of race and gender distorts his view of women. In this narrative Jason combats Caddy’s sexuality through his struggles with Quentin. Even after Caddy leaves the house, Miss Quentin remains a physical reminder of Caddy’s role in the family’s demise. Miss Quentin is nevertheless accepted into the Compson household, but she will repeat the same sexual notorious behavior that her mother previously displayed. “I never had time to be. I never had time to go to Harvard or drink myself into the ground. I had to work. But of course if you want me to follow her around and see what she does, I can quit the store and get a job where I can work at night.

Then I can watch her during the day and you can use Ben for the night shift,” (114). Jason remains resentful of Caddy and her pregnancy because he equates these events with his lost job and opportunity for success. Yet the pregnancy that lead to Caddy’s banishment and Jason’s demise, becomes the family’s only hope for redemption and future generation. Faulkner places the possibility of resurection in Caddy’s domain rather than that of the son’s to demonstrate her lasting influence on the family and its demise. Even once she has left the family, her past presence controls the family’s present circumstances. Jason, in particular, only remembers those events in the past that influence his present and his future. However, he can never forgive Caddy for the loss of the job at Herbert’s bank, and is therefore incapable of moving on to meaningful opportunities.

In each of their narratives, Caddy is a dynamic character whose words, body, and actions expose prevailing social and gender power struggle. She is a tragic character since, as a woman in a patriarchal society, she is not given her own voice or an identity separate from those her brothers give her. By denying her a voice, Faulkner makes Caddy the main focus of her brother’s narratives as her past actions dictate her family’s present situation. Each brother uses Caddy as a mirror to reflect their own obsessions, but she in turn reflects the cause of their demise. The Compson brother’s cannot escape the effects of Caddy’s sexuality, as she is the source of their obsession and irritation that cannot be forgotten or overcome. The Compson sense of southern values crumbles in the face of Caddy’s promiscuity. Caddy and Quentin emphasize the failures of the Compson mean in comparison to the Compson women, who have successfully escaped the family’s demise with their modern values.

The Sound and the Fury by William Faulkner Review. (2017, Jul 07). Retrieved from https://studymoose.com/the-sound-and-the-fury-by-william-faulkner-review-essay 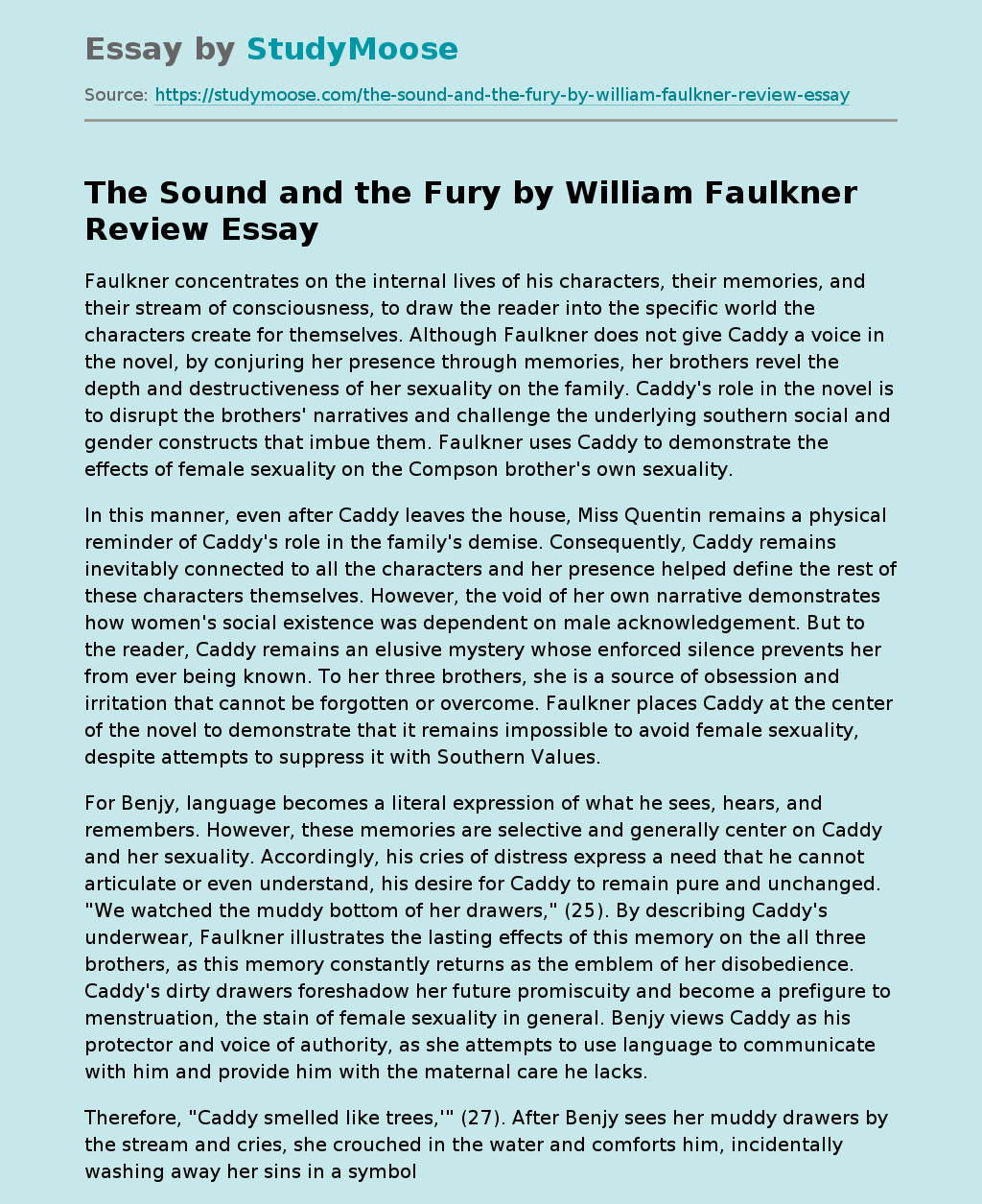