Throughout time, individual authors have crafted varying writing styles that portray the authors themselves and helps the reader to better understand the tone of the piece. During the early twentieth century, the upcoming of a new America created many talented writers that varied drastically in style. An author may choose to write in a realistic manor, such as Ernest Hemingway or William Faulkner. From the post Civil War era in which Faulkner was accustomed, to the early 1920s era of Hemingway? s short stories, both authors’ focus remains on a similar topic.

Turn in your highest-quality paper
Get a qualified writer to help you with
“ Hemingway vs. Faulkner writing styles ”
Get high-quality paper
NEW! AI matching with writer

Both authors were realist writers who expressed their concern with the changes happening in America. However, the writing styles in which Hemingway used, compared to Faulkner, show many differences. By comparing the styles of Hemingway and Faulkner, readers find a contrast in the authors’ use of sentence structure, word choice, and character development; but overall, they achieve a similar tone. In many of William Faulkner’s short stories, such as “Barn Burning”, the sentence structure is complex; he describes vividly what is happening by including small details about characters and setting others may find insignificant.

Faulkner uses long, complex sentences that contain hyphens and colons to continue his ideas throughout the sentence. In “Barn Burning”, Faulkner writes “Now he could hear his father’s stiff foot as it came down on the boards with clockwise finality, a sound out of all proportion to the displacement of the body it bored and which was no dwarfed either by the white door before it as though it had attained to a sort of vicious and ravening minimum not to be dwarfed by anything…”.

Faulkner commonly uses great detail to describe even the simple sound of the father’s faulty footsteps.

Much of detail is unnecessary but adds effect to the sentence. Hemingway, compared to Faulkner, uses short sentences to complete his thoughts. His ideas are expressed bluntly, but the point is clear. Both authors use sentence structure to complete an overall tone in their writing. Both authors achieve a similar tone using sentence structure. Faulkner uses long, detailed sentences to add to the effect of his stories. Hemingway uses short, blunt statements to set the tone. Many of the two author’s stories end with the same sad tone.

The sentence structure the authors use can carry tone throughout his story as they wish. The word choice of an author determines how a reader interprets the story. William Faulkner uses more complex words than Ernest Hemingway. In Faulkner’s stories, the words he chooses often are symbolic in a way. In “A Rose for Emily” Faulkner writes “………” The word choice in the sentence sets a tone for the story. The word choice Faulkner uses often make up the complex sentences in his stories. Hemingway’s word choice is less complicated. His ideas are expressed bluntly through his words. It is easy for the reader to understand Hemingway’s stories without further interpretation. 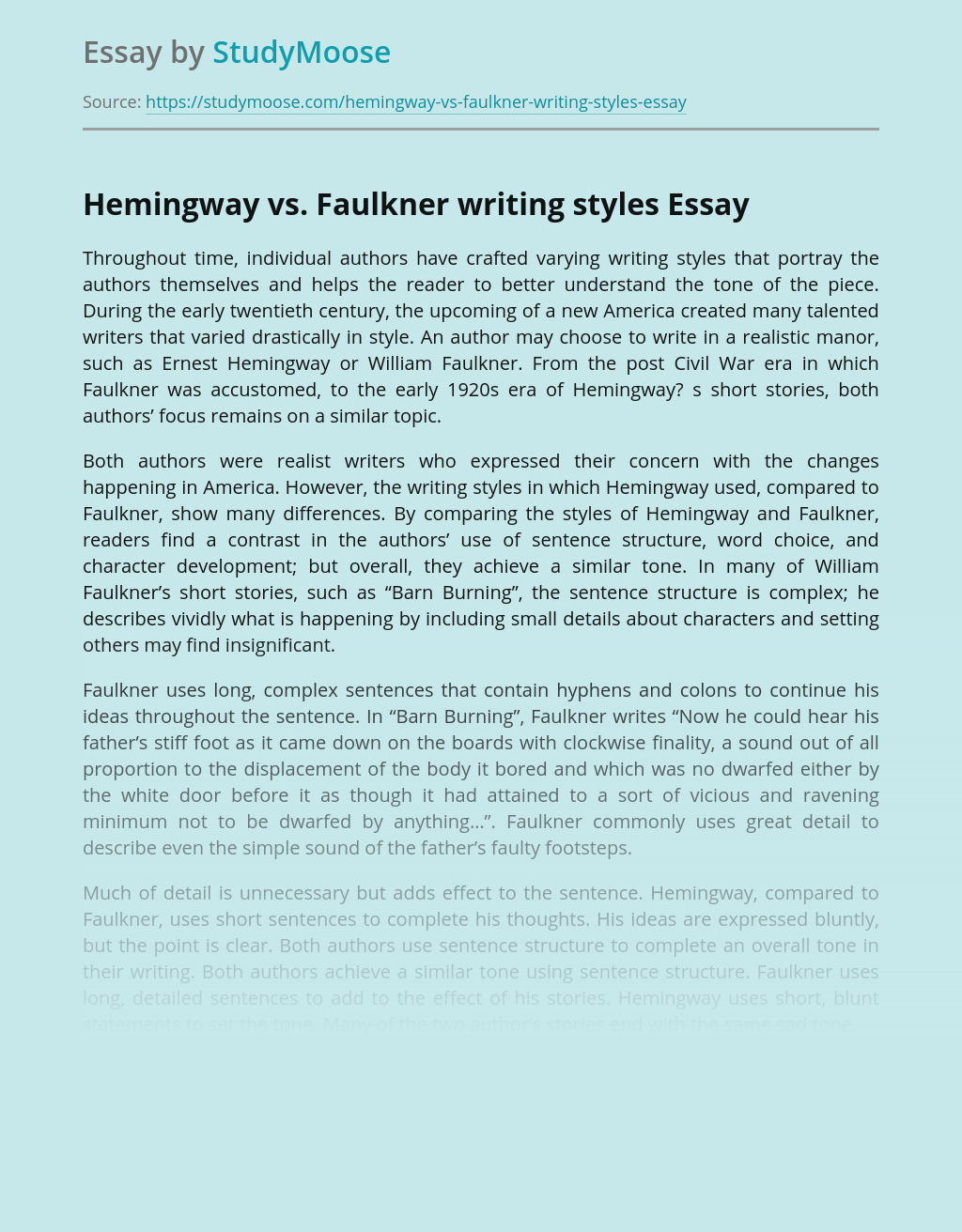 Turn in your highest-quality paper
Get a qualified writer to help you with
“ Hemingway vs. Faulkner writing styles ”
Get high-quality paper
Helping students since 2015
Stay Safe, Stay Original