Attitudes Towards War in A Farewell to Arms by Ernest Hemingway

Ernest Hemingway was one of the most influential writers of the Modern period. After being rejected from the army, Hemingway entered the war in 1917 as an ambulance driver on the Italian front. Hemingway’s relationship with the war could have been his reason for writing his novel A Farewell to Arms. A Farewell to Arms takes place in Italy in World War I. The novel tells of the conflicts of an American ambulance driver on the Italian front, Frederick Henry, and his difficulties with war, love and death.

Don't use plagiarized sources. Get your custom essay on
“ Attitudes Towards War in A Farewell to Arms by Ernest Hemingway ”
Get custom paper
NEW! smart matching with writer

In this particular novel, Hemingway expresses several different attitudes towards war through the characters Frederick Henry, Lieutenant Rinaldi, and Gino.

World War I has no extreme effect on Frederick Henry. He feels as though it is not his war to fight since his country has very little to do with it. Henry does not even realize the seriousness of the war until it takes its toll on him. Frederick Henry mentions, “Well, I knew I would not be killed.

Not in this war. It did not have anything to do with me. It seemed no more dangerous to me than war in the movies” (37; ch. 7). The war is no more than another adventure to Frederick Henry. It seems he is in the war just to have something to do. Catherine says to Henry ” ‘Why did you join up with the Italians?’ ‘I was in Italy,’ I said, ‘and I spoke Italian'” (22; ch. 5). Clearly Henry does not care much for the war. He feels uncomfortable with the passion others feel for it, such as Gino, and Henry exemplifies this when he mentions, “I was always embarrassed by the words sacred, glorious, sacrifice and the expression in vain” (184; ch.

Lieutenant Rinaldi’s outlook on the war is depressing, and he feels as thought he war has torn his entire world apart. Rinaldi used to the happy go lucky man who always had a couple of drinks and a good time until the war truly takes its toll on him. “The war is killing me. I am very depressed by it” (167; ch. 25). He is telling this to Frederick Henry after a long separation period when Henry was in the hospital. Rinaldi has clearly changed and Henry notices right away. Unlike Henry, Lieutenant Rinaldi seems to get a sense of belonging from the war, and he felt like he was needed as a talented surgeon. As soon as Rinaldi is no longer needed for operating anymore, he no longer feels he is needed in the war, and his place in society becomes unclear. Rinaldi comments to Henry, “I don’t operate now and I feel like hell. This is a terrible war baby. You believe me when I say it” (167; ch. 25).

Gino is the man who shows Henry around Gozoria after Henry’s return from Milan. Gino thinks of the war as a big opportunity to show loyalty for his country. All he wants to do is make a difference in the army, and he almost refuses to admit to the harsh realities of war. Gino believes that all great acts are done strictly out of the goodness in people’s hearts and are done only to be loyal patriots. Gino says to Henry, “We won’t talk about losing. There is enough talk about losing. What has been done this summer cannot have been done in vain” (184; ch. 27). Gino clearly thinks all men should be as patriot as he is, and does not seem to understand those who are not. Henry realizes this and respects Gino’s opinions and beliefs. “Gino was a patriot, so he said things that separated us sometimes, but he was also a fine boy and I understood his being a patriot. He was born one” (185; ch. 27).

Attitudes Towards War in A Farewell to Arms by Ernest Hemingway. (2016, Jul 05). Retrieved from https://studymoose.com/attitudes-towards-war-in-a-farewell-to-arms-by-ernest-hemingway-essay 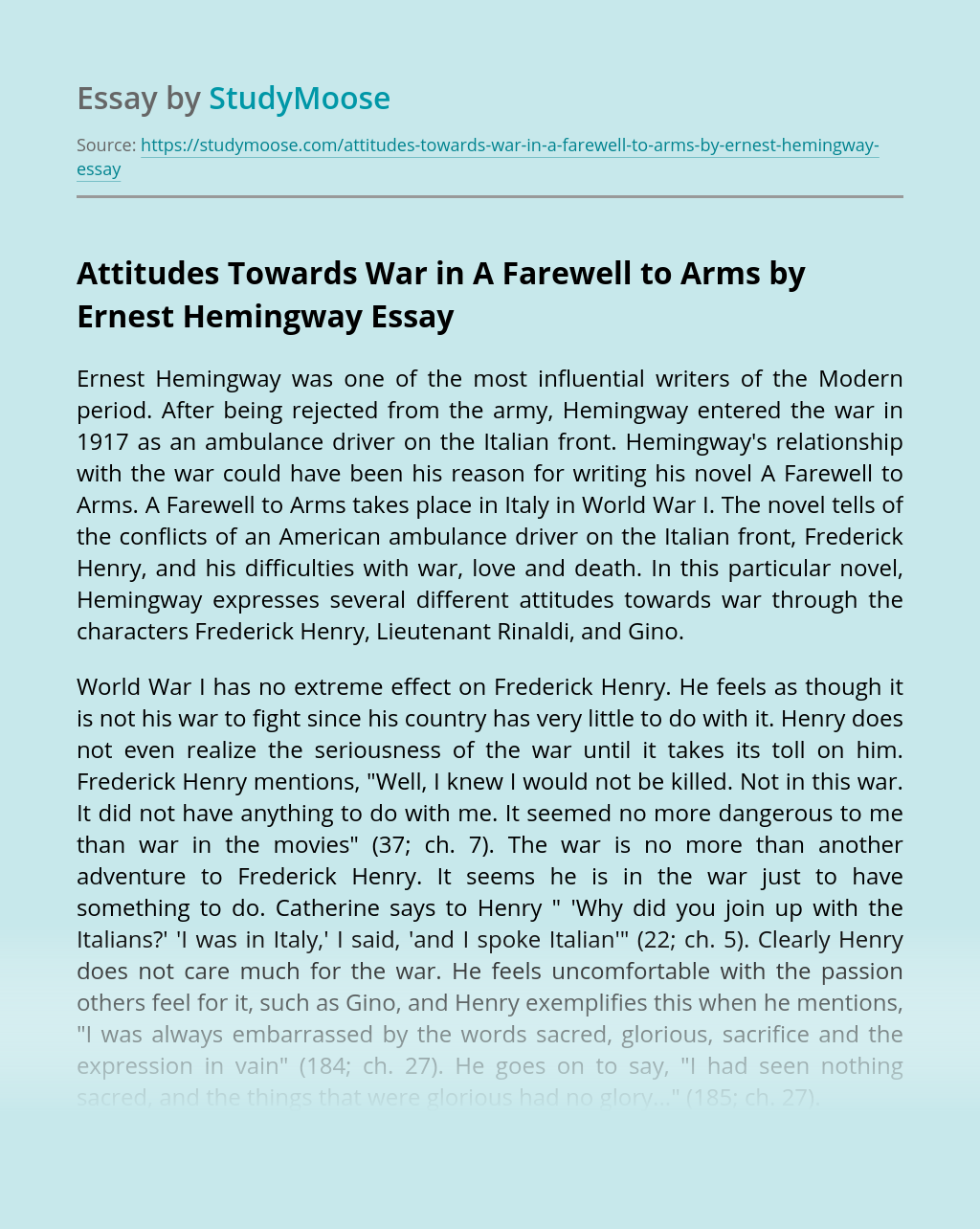