War and Faith in A Farewell to Arms

Throughout the history of American literature, stories of the white knight saving the damsel in distress and riding off into the sunset to live happily ever after have plagued our shelves for centuries. The birth of the modern tragedy came in the late 19th century and early 20th century with novels such as Red badge of Courage, and All Quiet on the Western Front. They show the realism of war and the harass tragedy that comes with it. Ernest Hemingway was a product of war himself, serving in the WWI.

Don't use plagiarized sources. Get your custom essay on
“ War and Faith in A Farewell to Arms ”
Get custom paper
NEW! smart matching with writer

Some consider his short narrative, A Farwell to Arms to be a reflection on his life during the war. Hemingway uses many themes, including love, faith, war and death in order to turn this story in a modern tragedy for the world to see. Some older writers of literature believe a true tragedy can only depict those with power and high status. As centuries past, the modern writer’s belief that tragedy may also depict ordinary people in domestic surrounding came to life in stories such as Henrik Ibsen “A Dolls House.

” With the emergency of the modern tragedy, Hemingway released A Farewell to Arms.

Through out this short story filled with five short narratives, you are taken on a journey through the eyes of a soldier, Frederic Henry, and into a tragic love story. His farewell is from Henry, to the woman Catherine Barkley, whose arms held understanding in the crazy world of the Great War. In the beginning of the book, Hemingway takes the main character, Henry, and introduced him to Catherine Barkley, the women he becomes romantically entangled with.

Catherine seems to have a full grasp on the idea of war and the tragedy that comes with it.

Henry, whose emotions towards woman have dulled, is rekindled with the emergence of Catherine. “I had treated seeing Catherine very lightly, I had gotten somewhat drunk and had nearly forgotten to come but when I could not see her there I was feeling lonely and hollow. ” (41) Henry is describing his first intimation that his feelings for Catherine Barkley are more significant than he has previously felt for other women. The paradox of this occurring is, that Henry has Catherine to care for, and she all ready lost one love in the war. A modern tragedy looks at the average man with an everyday occurrence.

Hemingway uses Henry to show the reader what can occur to men in time of war, and how it affects their life. It also shows their struggle to adapt to tragedy. As Italians are losing ground, many soldiers are losing faith and drawing back. “They were beaten to start with. They were beaten when they took them from their farms and put them in the army. That is why the peasant has wisdom, because he is defeated from the start. Put him in power and see how wise he is. ” (179) Henry, to the priest concerning the disposition of the Italian army, Soldiers of this Italian army are just regular men, put into this situation.

Henry has lost faith in the military, and the war. After fleeing an army, Hemingway brings Henry back to Catherine. Hemingway brings this relationship to the next level of love and ecstasy. Carrying them off too Switzerland, to live carefree form the Italian country they could not return to. Catherine becomes pregnant and Henry comes to the realization that he truly does love this women. “We knew the baby was very close now and it gave us both a feeling as though something were hurrying us and we could not lose any time together. ” (311) Henry describing he and Catherine’s mood in the weeks before the baby is due.

Hemingway portrays these main characters in bliss, and the deep love they share with each other. Neither knew that a traumatic conclusion loomed around the corner. In the final narrative of A Farewell to Arms, Hemingway concluded this modern tragedy with the birth of a still born baby to Henry and Catherine. Following this ironic occurrence, Catherine hemorrhaging was too much for the doctors to repair and she quickly faded away. “But after I had got them out and shut the door and turned off the light it wasn’t any good. It was like saying good-by to a statue.

After awhile I went out and left the hospital and walked back to the hotel in the rain. ” (332) Hemingway ends this tragic love story of and ordinary man in an ordinary situation, who meets with a heartbreaking loss of a child and the women he loves. He lost a woman, who seems to have an understanding and the ability to shelter him from the world plagued by war. A Farewell to Arms, which Henry narrates after Catherine’s death, confirms his love and his loss. Hemingway proves his ability to write a modern tragedy in these five short narratives.

He uses this ordinary character, Henry, and shows the views of someone who has love and lost. Hemingway uses many themes to show his readers the dramatics’ that war can bring to people, and the quirk of fate, which people go through everyday. Man has the ability to lose faith when confronted with adversity, but also can learn to love as he shows when Henry transforms from a man looking for pleasure, to a man that falls in love. A Farewell to Arms is a classic modern tragedy that proves that there is not always a happy ending, and happily ever after doesn’t occur all the time.

War and Faith in A Farewell to Arms. (2016, Sep 06). Retrieved from http://studymoose.com/war-and-faith-in-a-farewell-to-arms-essay 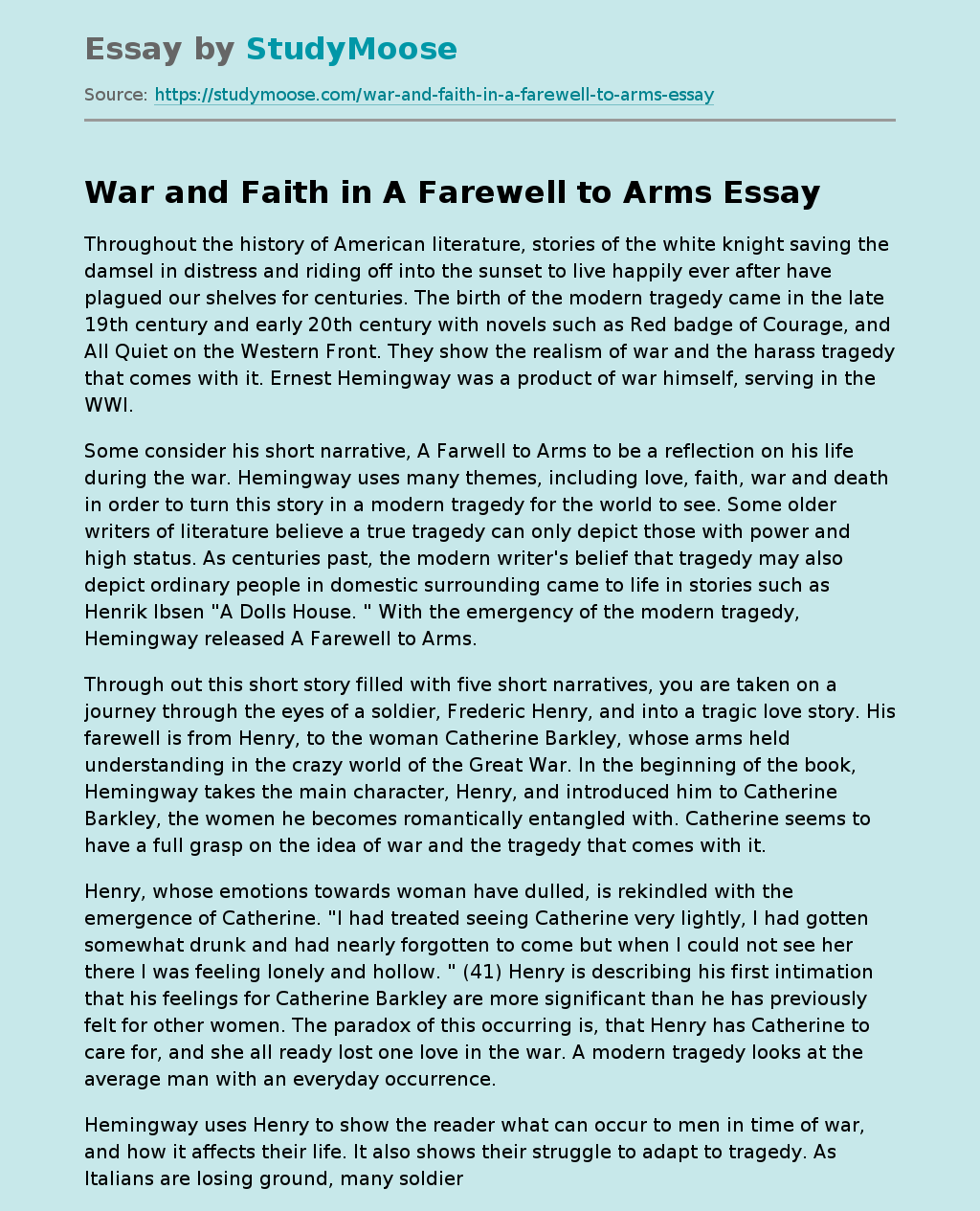