Writers and storytellers use different writing styles to lure

Writers and storytellers use different writing styles to lure the reader into the story. Irony is a literary resource used when the writer wants to represent a meaning other than the literal meaning There are 3 different types of irony: verbal irony is when words are used to mean something different that from what they appear to mean. Situational irony is the difference between what is actually happening and what is expected to occur. The reader is more aware of what is occurring than the character is when dramatic irony is being used.

Don't use plagiarized sources. Get your custom essay on
“ Writers and storytellers use different writing styles to lure ”
Get custom paper
NEW! smart matching with writer

Parody is achieved when the writer overstresses certain characteristics of a character in order to achieve humor. Parody mimics a character directly. Parody attracts to the reader’s sense of humor. The writer pokes fun at the norms of society in order for the reader to be included in the jesting of the character. In both Washington Irving’s “The Spectre Bridegroom” and Alexander Pushkin’s ” The Snowstorm”, irony and parody are implemented in these gothic horror stories to keep the readers entertained.

There are different elements of Gothic literature that Irving and Pushkin include in their stories. These elements are important because they make Gothic literature stand out from regular story telling. Gothic stories are best read/told when they include the following elements: Location is key in setting the stage so the reader can place themselves right into the story and it contributes to the mystery as it unfolds. “The Spectre Bridegroom” takes place in a castle.

Other nobles had given up their uncomfortable old castles but “the Baron remained proudly drawn up in his little fortress, cherishing with hereditary inveteracy, all the old family feuds, so that he was on ill terms with some of his nearest neighbors, on account of disputes that had happened between their great great grandfathers.” In “The Snowstorm” the story location is closely related to “The Spectre Bridegroom” as it also takes place in a grand estate, ” there lived on his estate Nenaradovo.”

Gothic literature needs to have a damsel in distress. The female often faces life events that have them afraid and confused on how to proceed. In both stories both lead female characters are young girls seeking marriage. In “The Spectre Bridegroom” the Baron’s only child is raised by two maiden aunts who themselves are examples of irony. Irving points put that the two aunts were very coquette when they were young ladies. Because of this, they “were admirably calculated to be vigilant guardians and strict censors of the the conduct of their niece; for there is no duanna so rigidly prudent and inexorably decorous, as a superannuated coquette.” Irving piles on the praise on the beauty and so-called accomplishments of the Baron’s daughter. He writes that she, “made considerable proficiency in writing, could sign her own name without missing a letter, and so legibly, that her aunts could read it without spectacles.” Irving shows the reader here that the daughter’s beauty outweighs her intelligence. Irving never names the daughter as to spotlight the fact that she really is a female that needs to be saved through marriage. On the other hand, Marya, the bride to be in “The Snowstorm” is named and given quite a bit of dialogue. She too is consumed with the notion of love and marriage. She believes that she is in love when in fact is in the initial stages of infatuation. Marya hesitates and makes herself sick when major live decisions need to be made.

In 18th century Germany, poet Gottfried August Burger is responsible for the first gothic horror story, “Lenore”. Burger wrote this gothic tale in burlesques style with moments of romanticism. This ballad contains all the elements of gothic literature. It held fast to the superstition and legend that people believed that ghosts disappear when the first rooster crows. It had characters riding on horses through haunted forests. It ended in a cemetery where skeletons appeared and the female character was allowed to stay pure. She had the chance of salvation. Irving and Pushkin base their stores on ‘Lenore” because readers and audiences alike were enthralled with the idea of love being intertwined with ghosts and poor decision-making. As seen in “Lenore” Pushkin and Irving provide a fear enhanced by the unknown. The atmosphere of mystery and suspense is done on purpose to draw the reader in. Ghosts and other supernatural beings are used to complete the process of making the reader be afraid for the lives and souls of the characters. These stories are based on elopement, suspense and parody.

Weather is another element of Gothic literature that in both stories can be considered a main character. In “The Snowstorm” the blizzard and white out conditions are symbols of how difficult relationships can be to find your way to your true love. The snow symbolizes the fate and destiny of the bride and groom. Pushkin uses images and metaphors of nature to symbolize the psychological barriers that can exist in romantic relationships. The snowstorm that prevents Marya and Vladimir from eloping not only signifies the hidden parts of one another that they can not see, but also the inexperience of handling difficulties that they need to experience independently before they can unite in true love. In ” The Spectre Bridegroom” the weather is dark and windy in the forests that the groom and friend are traveling through. It is here in these forests, thick with trees, is also where the groom to be is murdered. “In this way they had entered among the mountains of Odenwald and were traversing one of its most lonely and thickly wooded passes.” Weather is important here as the reader can surmise that it would have very little sunlight coming through the trees. This lack of sun or warmth symbolizes the how this pre-arranged marriage was lacking the foundation it needed in order to actually happen.

Gothic horror stories would not be complete without a male protagonist hiding a guilty secret. These characters are attractive and at the same time conflicted. They are usually trying to act upon their own righteousness. Vladimir from “The Snowstorm” gets lost in the white out conditions. He pays no mind to his horse that is struggling to continue one as the horse was ‘waist deep in the snow”. He knows that being a coward is not allowed. His honor is at stake. Yet, he “set out without a coachman to Zhadrino where in a couple of hours Marya was to arrive. He knew his way, and it was only a twenty minutes’ drive.” Vladimir spent hours and hours going round in circles. This was Mother Nature’s way of telling him that he was not ready to be a husband. Herman Van Starkenfaust the stand in groom in “the Spectre Bridegroom” has a tremendous secret. He is not the man that was originally chosen to marry the Baron’s daughter. He finds himself with three issues that he must resolve. Should he tell the bride and Baron that the real groom is dead? Should he reveal that he is the son of the neighbor that the Baron has been feuding with? Lastly, should he let on that he is the spirit like William from “Lenore” that frightened them so? ” The mystery was soon cleared up. The cavalier (for, in truth, as you must have known all the while, he was no goblin) announced himself as Sir Herman Von Starkenfaust.” Herman triumphs not through strength or his physical abilities but through his manipulation of the bride’s family’s run away imaginations of supernatural beings.

Gothic literature has a unique relationship with melodrama, emotions and with the concept of death. Death is a contributing factor in building the mystery and suspense of the underlying horror of the story. Death is a realistic part of life, yet the idea that death could occur at anytime to characters that they have become invested in and do not want to see killed off captivates readers. Both stories use the emotion of love to tug at the heartstrings of the reader. This characterization is quite realistic because readers themselves often do believe that love at first sight can and often does happen.

“The Spectre Bridegroom” and “The Snowstorm” are satirical parodies, which reaches out to the reader to show that they did not copy the theme of “Lenore” but were stories that had their own version of humor and irony. These stories used the forces of nature, fear of the unknown, scapegoats and supernatural beings to showcase the different types of irony that if readers listen closely can infer what the authors truly mean. Even though Gothic literature often at times is based on frightening the reader, the true intent can be felt at the end of all three stories. These stories have heroes, heroines, ghosts, and death and over baring fathers yet they all end with the feeling that love can conquer all even if someone has to die in order for true happiness to prevail.

Writers and storytellers use different writing styles to lure. (2019, Dec 17). Retrieved from http://studymoose.com/writers-and-storytellers-use-different-writing-styles-to-lure-example-essay 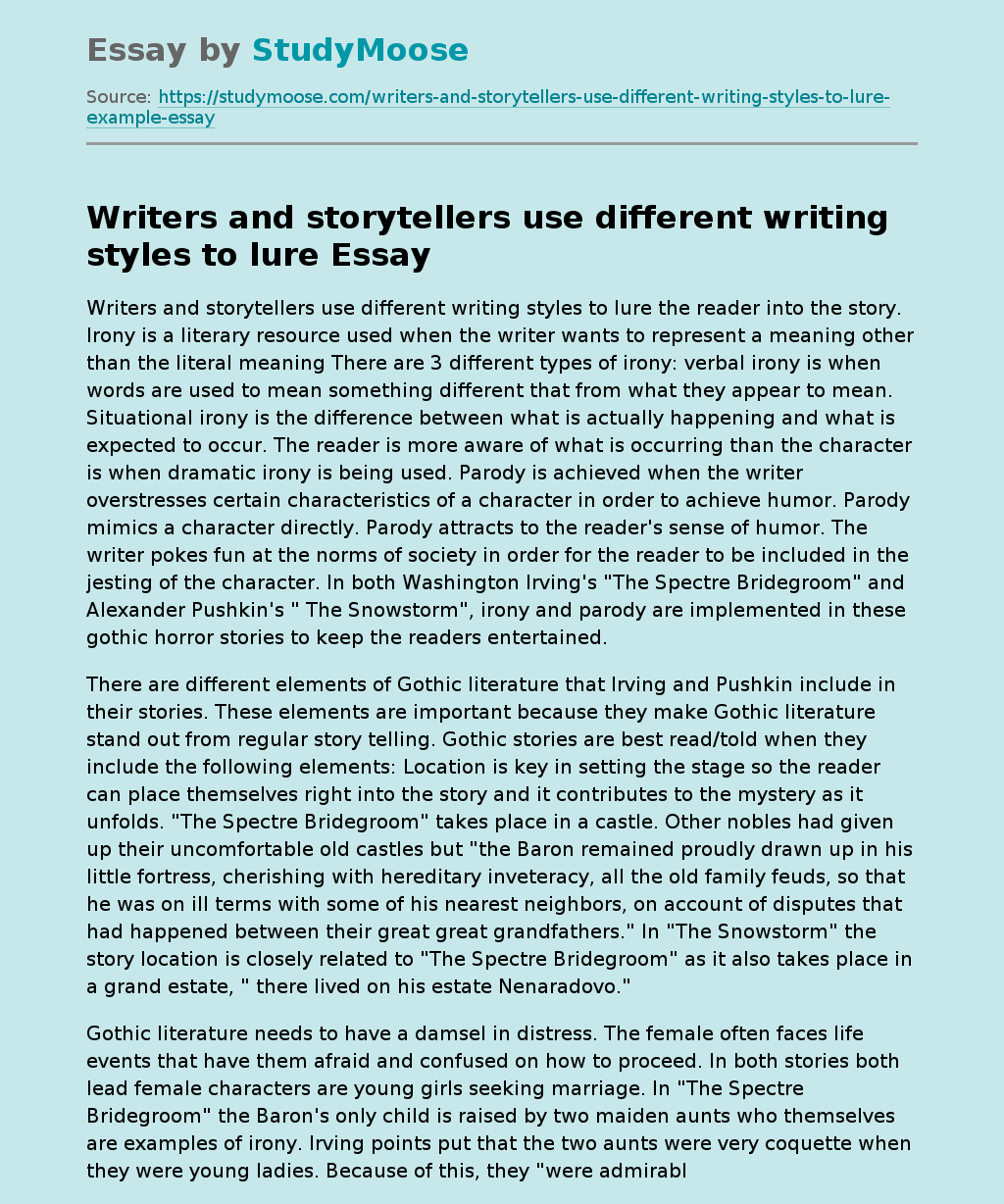