Hard Times as a Moral Fable

The creative part is the fairy tale which often involves animals rather than humans. It speaks to our hearts as it entertains us; the ending is the logical, moral conclusion that satisfies our logical brains and seems “right”. The problem with all moral fables is that there are often 2 sides to the same story … things are rarely so black and white in reality … so there could be more than one ending … e. g. here are times when speed is necessary over steadiness – of course, there also has to be good judgement.

Don't use plagiarized sources. Get your custom essay on
“ Hard Times as a Moral Fable ”
Get custom paper
NEW! smart matching with writer

Although it is not appropriate to describe a work of art, which Hard Times undoubtedly is, as a moral fable or a morality play, yet the fact remains that there is a strong moral intention behind this novel. Hard Times is a satirical attack on some of the evils and vices of Victorian society. Satire has always corrective purpose and is therefore basically moral in its approach to the subjects it deals with.

Apart from that, there are passages of direct moralising in this novel. Hard Times is a novel which from the moment of its publication aroused very different sentiments in the reading public. Dickens’s reasons for writing Hard Times were mostly monetary. Sales of his weekly periodical, Household Words, were low, and he hoped the inclusion of this novel in instalments would increase sales. Since publication it has received a mixed response from a diverse range of critics, such as F. R. Leavis, George Bernard Shaw, and Thomas Macaulay, mainly focusing on Dickens’s treatment of trade unions and his post-Industrial Revolution pessimism regarding the divide between Capitalist mill owners and undervalued workers during the Victorian era The novel was written as a weekly serial story to run through five months of his magazine, Household Words, during 1854.

Sales were highly responsive and encouraging for Dickens who remarked that he was “Three parts mad, and the fourth delirious, with perpetual rushing at Hard Times”.

Dickens had to force his story to fit the exigencies of a Procrustean bed and, in doing so, sacrificed the abundance of life characteristic of his genius. That, at any rate, was the general view of Hard Times until in 1948 F. R. Leavis, in his book The Great Tradition, suggested that it was a ‘moral fable,’ the hallmark of a moral fable being that ‘the intention is peculiarly insistent, so that the representative significance of everything in the fable – character, episode, and so on – is immediately apparent as we read. By seeing it as a moral fable, Dr. Leavis produced a brilliant rereading of Hard Times that has changed almost every critic’s approach to the novel. Yet a difficulty still remains: the nature of the target of Dickens’ satire. Both Gradgrind and Bounderby are emblematic, to the point of caricature, of representative early-nineteenth-century attitudes.

Dickens tells us that Gradgrind has ‘an unbending, utilitarian, matter-of-fact face’; and the novel has been taken as an attack on the philosophical doctrine known as utilitarianism, the doctrine that the greatest happiness of the greatest number should be the guiding principle of conduct But utilitarianism can also mean the doctrine that utility must be the standard of what is good for man. Perhaps the two meanings come together in the famous Victorian phrase, ‘enlightened self-interest,’ the meaning of which will turn entirely upon the definition of ‘enlightened.

Utilitarianism in the philosophical sense, as taught by the noble-minded John Stuart Mill, has had a profound and abiding influence on Western life and thought, and Dickens was certainly not competent to criticise it as a philosophical system. But if he was no philosopher, nor even a trained mind, he was something as valuable: ‘an astonishing diagnostician of life,’ as D. H. Lawrence has been called. ‘His sensitive nose could smell death a mile away. ‘ And it is precisely those elements of nineteenth-century economic thinking that denied life which he is attacking in Hard Times.

He is, in other words, continuing his attack on what may be called the statistical conception of man, on human relations evaluated in terms of arithmetic, on what Thomas Carlyle called the ‘cash nexus’ that he had launched at the beginning of his career in Oliver Twist. There he had traced its consequences in official attitudes towards poverty and in the working of the New Poor Law In order to give a concrete shape to his moral purpose, dickens in this novel uses the characters here as symbols.

Almost every character in this novel is an embodiment of a certain idea or concept or principle, good or bad. In fact, there are two groups of symbolic characters: one group symbolizing certain objectionable features of Victorian life, and the other group symbolizing certain moral qualities, of which we heartily approve. These two groups of characters, symbolizing opposite principle, are confronted with each other and it is this confrontation that constitutes the focus of interest in the novel.

Each character here is made to live as a separate individual, sharply distinguished from the other; yet their symbolic roles cannot be questioned. Coketown itself is treated as a symbol in the novel. This industrial town represents the industrial ugliness, industrial callousness, the mechanical and monotonous life which the workmen or the “hands” are compelled to lead under a system governed by utilitarianism and laissez faire. All the passages which describe this town or its people are written in an ironical vein and have an obvious moral purpose.

In the main, however, the best writing in Hard Times is a result of this tour-guide mentality, as his wonder, horror and awe lead to vivid evocations of the landscape. Many critics have made the link between Coketown and a kind of Dantesque Inferno, and his vision of industrial society is “full of horror, but possessing also a weird beauty”. The key to the weird beauty latent in the horror are the ‘melancholy mad elephants’ of machinery – Dickens was as fascinated by industry as he was repulsed by it.

The industrial artefacts of Coketown are endowed with all the life drained from its inhabitants, the dehumanised ‘hands’. Like Marx, Dickens could see an “inverted world characterised by the personification of things” and as a result the inanimate objects of Coketown abound with vitality, while the people within it are cogs in a machine, “people equally like one another, who all went in and out at the same hours, with the same sound upon the same pavements, to do the same work, and to whom everyday was the same as yesterday and tomorrow, and every year the counterpart of the last and the next” .

Treating the factory as a living thing leads to mental links being forged between the ever coiling “interminable serpents of smoke” and the smokescreens that people use to hide themselves from the world, or indeed the world from them, most notably Gradgrinds inability to see past his system, and Bounderby’s deliberate hiding of his past.

There are also links made between the fire in the “fairy palaces” and the fire of human passion, and aptly it is the mechanical Louisa who notices this, most likely fascinated at how a non-living thing has more life than she does – “There seems to be nothing but languid and monotonous smoke. Yet when the night comes, Fire bursts out, father! ” [I, xv]. Not only is this reversal of death and life hellish, but these descriptions of zombie workers in a living factory are written in a prophetic style which almost invites one to place an ‘Abandon hope all ye who enter here! sign on the factory gates.

All of the images of smoke, ashes, and fire “suggest that death is ever-present in the hell of Coketown”, as does the reference to the black ladder so often in use in the working class quarters [I, x]. Michael Wheeler points to the significance of Biblical imagery in the text, stating that the New Testament is the “yardstick by its modern usurpers are measured and found wanting”, and that this is the ultimate condemnation that Dickens can heap upon it.

However, I cannot help but feel that passages proclaiming that “all those subtle essences of humanity which will elude the utmost cunning of algebra until the last trumpet ever to be sounded will blow even algebra to wreck” , while suggesting that Gradgrindery and the interlocking forces of industry are to be judged and condemned, they also make it clear that they will be left well enough alone until the Judgement Day.

Coketown is painted as a hell on earth, consuming the lifeblood of its inhabitants, and the fact that it itself will be destroyed in the end is of monumental insignificance for the countless generations who will have to toil there until then. On the other hand The Circus is represented as a symbol of “Humanity” as Well as Art. The circus is very important as a sybol in the scheme of this moral fable. The circus people symbolize not only art but also humanity: they are embodiments of those simple virtues of sympathy and helpfulness to others for which gradgrind’s philosophy has no use and Bounderby’s hardened heart, no room.

There is a remarkable gentleness about these people, a special inaptitude for any kind of sharp practice, and an untiring readiness to help and pity one another. The moral of this novel as a whole is put by dickens in the mouth of Mr. Sleary of the circus. After giving an account of the death of siss’s father to gradgrind, Mr. Sleary comes to the conclusion that there is a kind of love in the world which is not self-interest afterall, but something very different, and that this love has a way of its own of calculating or not calculating.

This is the supreme message which the novel has for us. In these few words we find a condemnation of all that Gradgrind, Bounderby, and Mrs. Sparsit symbolize, and an acceptance and approval of what Stephen and Rachel, Sissy, and Mr. Sleary himself, symbolize. There are, thus, strong grounds for calling this novel a Moral fable or a morality play with the characters functioning partly as individuals but chiefly as symbols. Finally, there are passages of direct moralizing which lend to the novel the character of a novel fable or morality play.

At one point, for instance, dickens warns the “commissioners of fact” and the utilitarian economists that if they do not attend to the instincts and emotions of the poor people, reality will take a wolfish turn and make an end of everything. At another point Dickens offers an ironic commentary, with an obvious moral, upon the effects of Gradgrind’s system of education on Bitzer’s outlook. And then, of course, there is a plain and straightforward maoralizing in the final chapter when the author comments upon the ultimate fate of each of the characters.

Hard Times as a Moral Fable. (2017, Jan 10). Retrieved from https://studymoose.com/hard-times-as-a-moral-fable-essay 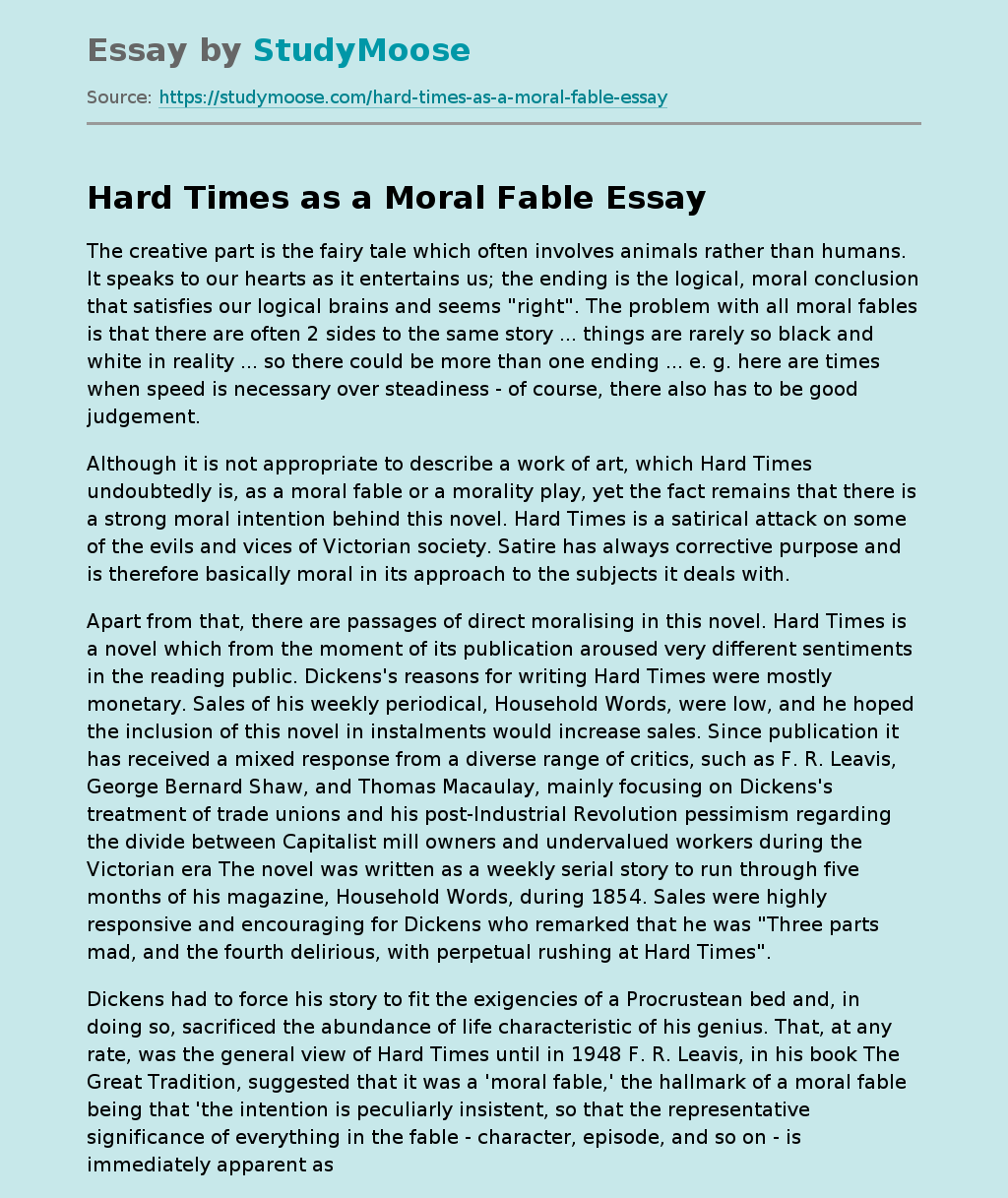