1. BYD Company, Ltd. (“BYD”) is the world’s second largest manufacturer of rechargeable batteries. Exhibit 1 shows that between 1999 and 2001, BYD’s annual sales grew three times – exceeding RMB 1.3 billion in 2001. Based on the first four months of 2002, BYD’s annual sales are expected exceed RMB 1.6 billion in 2002. Founded in 1995 by Wang Chuan-Fu, chairman and president, BYD has built its reputation by becoming the largest Chinese supplier of lithium-ion batteries to cell phone manufacturers. Exhibit 3 shows that by 2002, BYD was among the top four manufactures worldwide – and was the largest Chinese manufacturer – in each of the three main battery technologies (with about 9% market share in Li-ion technology, 31% market share in NiCd technology, and 8% market share in NiMH technology).

Despite the presence of large Japanese competitors – including Sanyo, Sony, and Matsushita – in the global market and a large number of local Chinese firms, BYD’s aim to improve the quality of products while keeping the price low started winning it business from foreign companies.

By doing so, BYD has positioned itself as a cost leader in the batter industry and has moved towards cost advantage in manufacturing of its products. BYD emphasized on the technology and product development by investing about 2% of the company’s revenue in product and process R&D. Since the development of its first lithium-ion battery in 1997, BYD has made several improvements that increased the cycle life of its products. BYD moved from having no patents as of 1999 to holding scores of patents as of the beginning of 2002.

The manufacturing process – in terms of sequence of steps – at BYD was similar to that at the competing Japanese firms. However, Japanese firms had most of the processes automated and had more dry-room space. This kind of set up needed greater investment in capital equipment and accounted for an annual capital expenditure five to ten times more than that at BYD. The biggest threat to BYD’s competitive advantage is the tough competition faced from the emergence of nearly 200 Chinese firms in the rechargeable battery market.

Like BYD did, these Chinese firms too relied on labor-intense production process. The lack of proper regulations in China allows the competitors to duplicate BYD processes easily. On the other hand, BYD faced a shortage of labor in Shenzhen because of the presence of large number of manufacturers located in that region. At BYD, 95% of the work force on the battery production is young women who have come from smaller villages across China. They would work here for a couple of years before returning to their home villages. As a result of this migration pattern, BYD faced a turnover of 10% to 20% in its manufacturing workforce.

2. The core competencies of BYD are: Battery Technology (by changing the product materials to make them less sensitive to humidity), R&D department, Human Resource Management (providing housing, food, and health insurance to workers, discipline traning, job rotation to reduce monotony, social activities and promotions), cheap labor and Manufacturing process (labor plus jigs equals automation). Of the above mentioned core competencies, battery technology, R&D department, Human Resource Management, and cheap labor are transferrable to the automotive business. However, the manufacturing process – which is not automated – is not transferrable to the automotive business. From the resources perspective BYD should enter the auto industry because acquiring Qinchuan Auto Company offers BYD rare resources such as production permits and land for its new Auto factory, which are significant barriers for entry for new competitors, at a reasonable price. These resources coupled with the BYD’s transferable resources could result in a successful enterprise.

3. The Chinese auto industry is overall attractive. There is huge growth expected in the Chinese demand for automobiles – from 1 million sedans in 2002 to potentially 6 million by 2010. Given this expected growth in demand for automobiles, several Chinese auto manufacturers had partnered with foreign manufacturers, such as General Motors, Toyota, and Volkswagen to sell their vehicles. As shown in Exhibit 13, the production capacity of major firms in china slightly exceeded 2 million units in 2002, this figure is expected to reach 3.5 million units by 2012 – as shown in Exhibit 14. Yes! The Chinese auto industry is attractive to BYD.

Given the expected growth and demand in the auto industry, combined with Chinese government having stopped issuing production permits for new automotive companies, there are very few remaining opportunities to get in to this booming auto industry. Moreover, BYD is getting a good bargain as the assets of the state-owned Qinchuan Auto are being sold at a cheaper price. The state owned auto manufacturers without foreign partners accounted for 25% of auto sales in China. Many of the SOE manufacturers did not even have R&D departments. Because most of the automobile parts were imported, similar models of cars cost more in China than in USA.

The existing foreign joint ventures were selling the vehicles at prices that gave them margins of 10% to 20%. Considering the current situation, there is room for low-priced entrants. Wang always dreamt of applying Li-ion battery technology to develop an electric vehicle. Using newer battery technology and assembling it cheaply, the vehicle could be competitively priced and represent a way for China to leap forward in an industry and technology in which it had previously lagged other nations. Wang was also excited about applying BYD’s deep capabilities in process engineering – used so successfully to design new methods of battery production that gave BYD a significant cost advantage over global competitors – to automotive manufacturing.

4. In addition to offering OEMs a “one-stop” solution for the outsourced manufacturing of their products, BYD should also acquire Qinchuan Auto Company. Because of the huge potential for the automotive industry in China and very few available opportunities, this is the right moment for BYD to enter the automotive industry. As Qinchuan Auto Company already has a name in the market, with its flagship product Flyer, BYD should continue selling Flyer along with other upgraded new models of car. BYD should also invest in automating the manufacturing process and R&D department. 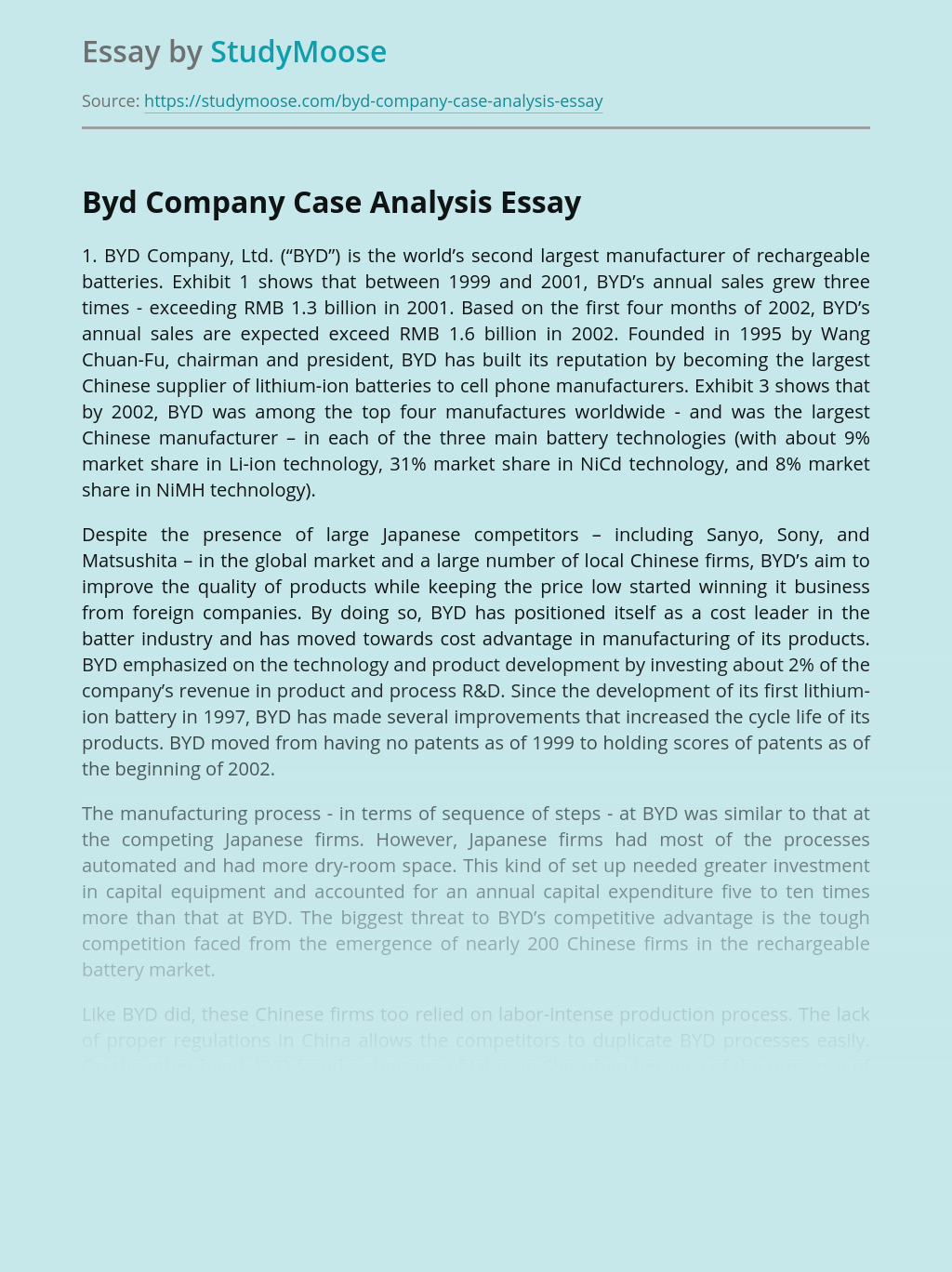