With the development of technology and medical systems, changing one’s appearance is something which is very normal. People chose to go under some kind of cosmetic surgeries have different reasons, but cosmetic surgery do really change some people to a better life. We are surrounded by advertisements, movies, magazines which usually have pictures of stunning models. The media and those kind of ads establish standard of beauty in their audiences’ mind. It is a nightmare for people who are not lucky enough to possess perfect features.

Don't use plagiarized sources. Get your custom essay on
“ Cosmetic surgery cons and pros ”
Get custom paper
NEW! smart matching with writer

It somehow lowers people self-esteem when they look up to those models as a references of beauty standard.

However, thanks to the development of technology and plastic surgery, those kind of nightmare can be fixed. With plastic surgery, almost everything on one’s body can be adjusted. When people get closer to their personal standard, they will feel more confident. Plastic surgery helps raising their self-esteem. Some reach out to cosmetic surgery to improve their appearances.

People have more choices than ever from a quick fix to major procedures to improve their body images. Aging is usually major problem. Every one of us has to face that when we get to some points.

Laser skin treatments, Botox injections, Filler injections…are life savers for people who want to reverse the aging process. It is not hard to find people at their 40’s 50’s who look much younger than their ages. Cosmetic surgery can improve almost everything. If you want small face, high nose, big eyes, big boobs, small waist, perfect flawless skin…plastic surgeons can give them all to you.

Plastic surgery is magic in transforming appearance, however it also has some disadvantages. I was terrified when I watched a Korean beauty contest which was not long ago.

The audiences might have a really hard time distinguish between the contestants, because they look almost the same. All of them have perfect features such as big eyes, high and small noses, small face… It should be called “plastic surgeons contest”, but they are all pretty though. People lose their personal identities when they get dramatic changes on their faces. On a larger scale, people lose their ethnical identities. For example, there is a trend in Asian countries that people want to westernize their look. Double eye-lid surgeries or nose surgeries are most common procedures.

Michael Jackson is also a great example for this issue. He tried to transform from a black to a white person, and the result was which we already knew. People may get addicted to plastic surgery too. Hang Mioku from South Korea is a case which people should look at before they consider about plastic surgery. She was a pretty women with natural beauty. Unluckily, she got addicted to cosmetic surgery, even surgeons refused to get jobs done on her. She injected silicon on her face herself, and worse than that, she injected oil in to her body. The result might terrified any person who ever think about get some jobs done on their bodies. 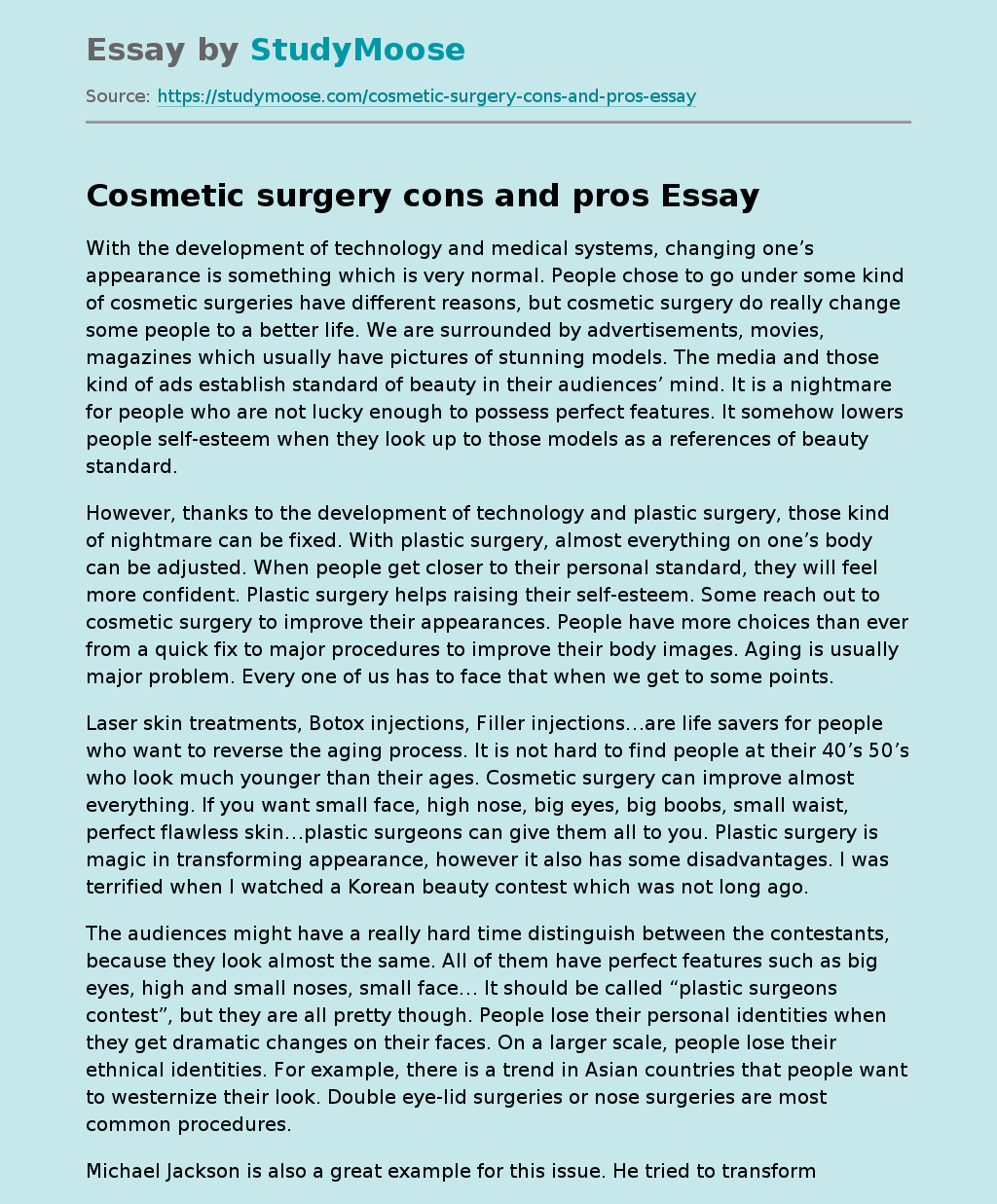