In 1956, Ruth Handler, an American businesswoman, was vacationing in Switzerland when she stumbled upon Bild Lilli, a doll that, unlike popular child dolls at the time, had long, shapely legs and used heavy makeup. Lilli, in reality, was based on a woman of the street in a postwar German animation, but Handler was influenced. She purchased 3 Lilli dolls, went back to California and in 1959 created the world’s very first Barbie doll (Lowen). Given that her debut in 1959, over one billion Barbie dolls have been sold worldwide in over 150 countries (Seare).

A Barbie doll is probably among the most famous cultural icons in America. When girls take a look at the doll, they see an independent, daring woman. Nevertheless, people might not comprehend the impacts that a Barbie doll can have on a little girl. Parents might think they are buying the perfect toy for their child, not understanding the stunning impacts that occur with Barbie. The point is Barbie has a negative effect on ladies since she supports an unhealthy weight, an abnormal beauty and is an impractical portrayal of females.

It is weird how a toy can have such an effect on a girl’s life. Depending upon the little girl, Barbie can have favorable or negative impacts. Barbie influences what a little woman desires her parents to purchase for her, how she thinks she should look, and what age the little girl ends up being physically active. It appears that Barbie would have more of a negative impact on children rather than a favorable one.

They feel that their little girls are growing up way too fast. The more accessories, the more money the family has to have to buy their child toys. Some children may feel left out in this situation because their family is not as wealthy. The more wealthy girls are able to get all the Barbie accessories they need. On the other hand the less fortunate girls feel left out because their parents are not able to buy them everything they want. This would be a negative affect about Barbie. Little girls can get very upset and feel left out if they do not have everything that Barbie has. Another thing about Barbie is the girls want to look and be just like her. Barbie is skinny, tall, and has big breasts. Researchers have discovered that girls as young as five are already concerned about body image. Their studies have shown that Barbie dolls, which are far thinner than traditional shapes, particularly at the waist, make girls want to be unrealistically slim when they grow up.

There was a particular Barbie doll that was sold with a book that was titled How to Lose Weight, which advised young girls not to eat. The doll also came with a bathroom scale reading 110 pounds, which would around 35 pounds underweight for a woman who is 5 feet 9 inches. Another Barbie doll that was sold, spoke a number of phrases one of them being “Math is hard!” alluding to dumb, blonde stereotype (Barbie). This has become such a problem that lawmakers are proposing to ban sales on the doll. The Barbie Ban Bill was proposed by Democratic Delegate Jeff Eldridge. Eldridge has gone on to say that such toys influence girls to place too much importance on physical beauty, at the expense of their intellectual and emotional development (Ditch the doll?). In 2003, researchers found that if Barbie were a life-size woman, her measurements would be 32-17-28—highly unrealistic for a woman, says the Body Project of Bradley University.

Girls compare themselves to Barbie from a young age, which has a negative effect on the self-esteem of girls between 5 and 8 years of age, say Helga Dittmar and Emma Halliwell in their book “Consumer Culture, Identity, and Well-Being.” They compare their actual body size to the ideal body size projected by Barbie, say the authors, as well as developing an exaggerated concept of their ideal adult body size. Barbie affects girls’ self-image most at a younger age, they add, but girls carry this concept with them as they grow up. This causes them to focus on inadequacies they think they have, rather than on their strengths. From as young as age 4 or 5, Barbie teaches girls to strive for the perfect body. However, hers is far from perfect—society only defines it as such. In fact, if Barbie were a real person, her waist would be 39 percent smaller than an anorexic patient’s say Dittmar and Halliwell in reference to an earlier study.

When they can’t live up to her standard, some girls become anorexic or bulimic in an attempt to change their bodies. Others get breast implants that cause them to suffer from back problems, soreness or other complications. The tragic irony is that each woman has her own individual shape, while plastic itself can be molded however we choose. Still, Barbie keeps her unrealistic form while flesh-and-blood women try to change theirs to match hers. Take a look at real women’s dimensions versus Barbie’s dimensions, which are physically impossible for a person to have. A real woman’s average height and weight is 5 feet 4 inches and 140 pounds. The average dress size of a woman is an eight and her bust is between 36 inches and 37 inches, which is a B cup. The size of a woman’s waist is between 30 inches and 34 inches, her hips are averaged between 40 inches and 42 inches, and her average shoe size is estimated to be 81/2 and 91/2.

Now, Barbie as a human, her height would be 7 feet 2 inches and her weight would be 101 pounds. Her dress size would a 4 and her bust would 39 inches, which is double F cup. Her waist would be 19 inches, which is the same as a head, and her hips and shoe size would 33 inches and a size 5. Barbie’s body would have room for only half of a liver and only a few inches of intestines, as opposed to the usual 26 feet. The result of that would be chronic diarrhea and death from malabsorption and malnutrition. Her neck is twice as long as the average human’s which would make it impossible to hold up her head. The circumference of Barbie’s head is the same as her waist. Barbie’s legs are 50 percent longer than her arms, while the average woman’s legs are only 20 percent longer than her arms. To look like a Barbie doll proportionally, a healthy woman would need to add 61 centimeters to her height, subtract 15 centimeters from her waist, add 13 centimeters to her chest, and 8 to her neck length. If a woman had the same measurements as Barbie, she would not have enough body fat to menstruate and obviously have no children.

There are 3 billion women on the planet who don’t look like Barbie; only 8 women come close. Barbie’s feet are so proportionally small that her chest would pull her perpetually forward onto her toes, she wouldn’t be able to walk upright (Lowen). How many Americans’ can honestly say they are not materialistic to some extent? As a society, we all want brand name clothes, or the newest technological devices. These are the things that the media considers “cool.” Reality shows on television do not help either. All they simply show are the very fortunate and spoiled kids. Like Barbie, they think it is necessary to want and get everything. People in America are consumed with having materialistic things; even kids. The media is our prime source of information. We base all our judgments off of their opinions. We see commercials, and are immediately sold to the product. Everything is so glamorous. However, we must learn that ordinary people do not have an amazing time driving the newest car. People become so absorbed in a materialistic culture; it can sometimes have a negative effect. It can hurt emotionally, but mostly financially.

It can cause stress to you and the people around you. Some can even become obsessed and addicted. Being materialistic can also be a sign of insecurity. Even though Barbie is considered an American icon, there are those who feel that the doll lacks diversity. It was until 1980 that young girls finally saw the arrival a Black Barbie in 1980. That same year, the Latina version of Barbie entered the market. Yet, “Critics have called some of the Barbie dolls of color too White, not quite as ethnic as they are suppose to be.” Barbie also puts forth the idea that white skin, blond hair and blue eyes are the ideal standard of beauty. In our society, young girls and women of different ethnicities often feel they’re being judged according to a standard they can’t live up to. Rather than recognizing all the different types of beauty in the world, Barbie continues the myth that European beauty is the standard. Many African Americans have complained that their version of Barbie is much like Barbie dipped in brown paint.

To further the argument of Barbie’s whiteness, Barbie for President 2000, featured White, Latina, and Black Barbie, but not the Asian version (Social Impact and Criticism). Additionally, the releases of African American Barbie dolls caused controversy in 1967 and again in 1997, and in 2003, Saudi Arabia outlawed sales of Barbie because it did not conform to the ideals of Islam. In 1997 a 17-year-old girl with cerebral palsy pointed out that the Barbie doll in a wheelchair would not fit in the elevator of the Barbie Townhouse, prompting a promise of a redesign of the house by Mattel. In 2009, Mattel released “Totally Tattoo Barbie” with tattoos to be applied to the doll including a lower back tattoo, which sparked outrage among some, that this might make young girls want to get tattoos themselves.

Mattel may be reluctant to the change because she has been around for fifty years and is an American icon. On the other hand, this change could benefit Mattel in their sales, which have fallen 30 percent in the United States and 18 percent worldwide (Barbie). Ultimately, what needs to be done in this situation is for Mattel, Barbie’s producers, to give the doll a whole new makeover, not just a new outfit or career. People may think that it’s silly to change her because she is just a toy, but children are very impressionable and usually mimic what they see.

Barbie’s list of careers range from babysitter to United States President, but for girls to have a more practical view, shouldn’t she commit to just one job instead of every career possible? The first thing that should be done to improve Barbie’s image is to make her look more realistic. She should look like and even feel what real women look feel like today. Not all women are going to have a wonderful marriage, have a fantastic career and make loads of money, be a take care of their children and still look beautiful. Girls should know that all of this is not possible and it is a very unrealistic portrayal of women. These particular changes are necessary because young girls are usually inexperienced about the world and should be given the chance not to grow up into naïve women. 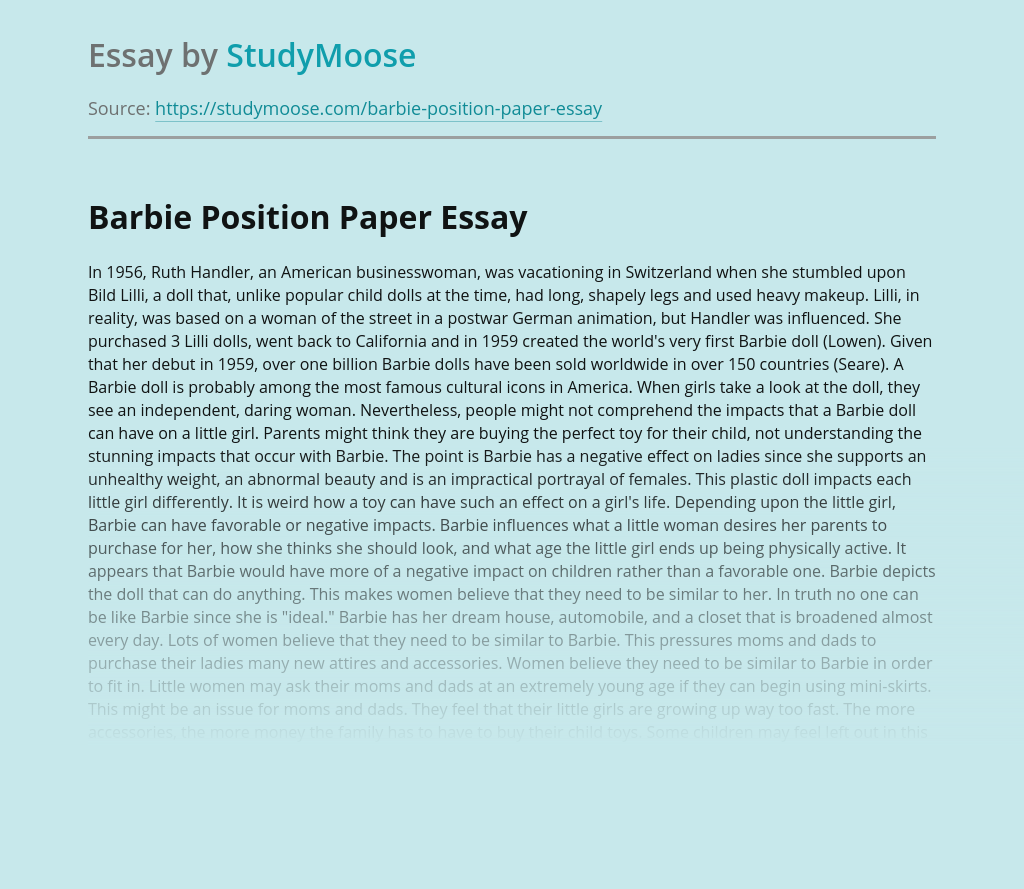